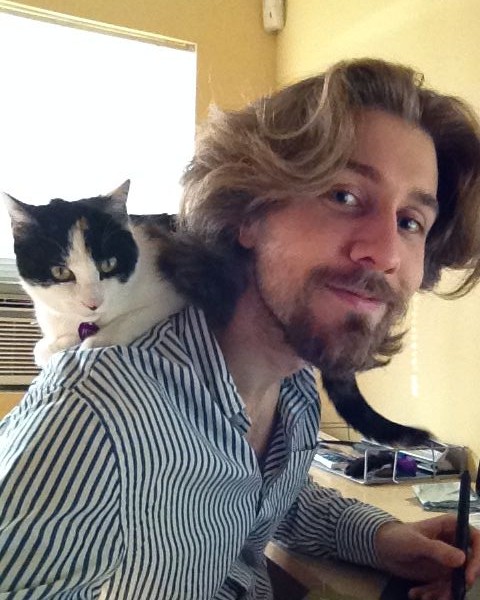 Today we’d like to introduce you to Matteo Marjorm.

Matteo, please share your story with us. How did you get to where you are today?
My story starts on the elementary school playground. While other kids were picking up basketballs or jump-ropes, I was picking up markers. I would often spend my recess drawing board games set in fantasy worlds and then play them with my close friends. Around this time, in the mid-90s, I also had the unique opportunity to playtest upcoming attractions for a Disney virtual reality theme park, Disney Quest. The project ultimately wasn’t a success, but meeting the Imagineers and seeing them tackle design challenges in person was eye-opening. I hadn’t really considered that you could get a job doing that sort of thing. This newly kindled fire is what ultimately led me to USC’s Interactive Media Arts program. After graduating in 2011, the markets were still recovering from the Recession, but I found a job doing marketing graphics for a game studio in Downtown LA. The work was steady, but it didn’t satisfy that creative itch I had when I was younger and left little time for experimenting with my artwork. At the start of 2016, I left the company and switched to freelancing. Working freelance in LA has been an amazing experience. This city is filled with creativity and I really enjoy tapping into that stream.

Has it been a smooth road?
I don’t think pursuing the path of art as a career is ever truly smooth, but I do consider myself incredibly fortunate that it hasn’t been too bumpy. I’ve had full support from my family, I found an industry job out of college, and have managed to make things work. Staying focused and not being discouraged is sometimes the biggest struggle. Creating artwork on demand isn’t easy and you get lost comparing your work to your peers. Just spending an afternoon perusing ArtStation can make you want to throw your tablet out the window. While I still have off days, I’ve learned to accept that it’s impossible to learn it all and focus instead on my personal growth, which is far more rewarding. As artists, we get to take our ideas and create something out of nothing. What was once a blank canvas is now a glimpse of a new universe birthed from your imagination. At that moment of creation, you get to wield an almost godlike power. That moment is exhilarating, if not somewhat intoxicating, and what drives me to go through this process again and again.

What has been the proudest moment of your career so far?
One of my proudest career moments was earlier this year, actually. I recently had the great opportunity to create some illustrations for Chris Stapleton’s performance during the 2016 CMT awards. Unfortunately, I wasn’t there to see the performance in person, but I did get to see my artwork broadcast on live TV in front of a cheering crowd. Seeing my work displayed on the giant screens was a first for me and honestly a bit surreal. I know that the audience was there for the music, but I like to think that my artwork contributed to the overall excitement of the evening. About a month after the performance, I was introduced to someone who had watched the awards show and without knowing my contribution, mentioned how they thought my artwork stood out during the event. Generally aside from immediate friends or colleagues, I don’t run into people who have seen my work, so it was really flattering to meet someone in the wild who had.

Were there moments when you had to struggle?
As I mentioned before, often my struggles tend to be more internal. As an artist for hire, you are constantly solving problems for clients and this requires turning on creativity at any moment. Some days the fount of creative juices overflows and on those terrifying days, it runs dry. There was a time earlier in my career where I severely misjudged how long it would take me to complete a project and I ended up overbooking myself. To make sure everyone was satisfied I had to set everything else aside and just work non-stop, getting little sleep, sometimes skipping meals. It wasn’t fun. Thankfully you quickly learn from these mistakes and realize that your health is one of your most important assets.

Is our city a good place to do what you do?
I think Los Angeles is one of the best cities for anyone pursuing a creative career. There is such a concentration of talent and opportunity here that I’ve not seen anywhere else. Though to be fair, I am a native Angeleno and may be a touch biased, but LA gives you a unique opportunity to work with and to learn from some of the best artists out there. Commercial art is a booming business, and if approached right, you’ll constantly be busy. At times, being in LA is also a challenge. Every so often, I am reminded of just how large the city is. There is an almost endless supply of talent here, and it’s incredibly important that you work hard to make connections and establish your brand. While there are certainly some challenges to living in LA, cost being one of the most notable, I would still highly recommend it even for artists just starting in their careers. The amount of experience meaningful interaction you can gain from working here is invaluable.