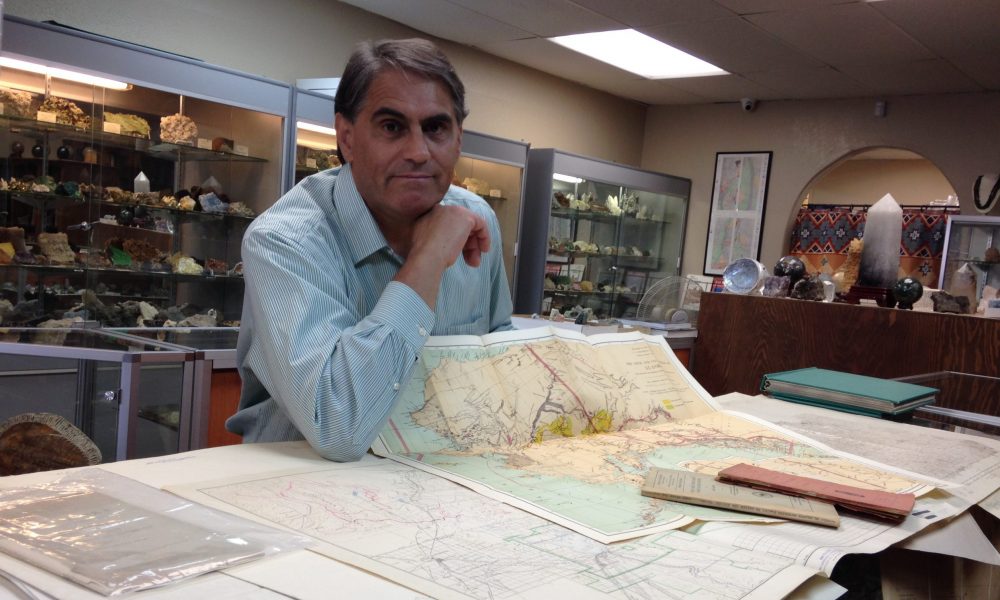 Today we’d like to introduce you to Walter Lombardo.

Walter, can you briefly walk us through your story – how you started and how you got to where you are today.
I have a natural history gallery and earth science bookstore. We carry minerals, fossils, crystals, meteorites, decorator items, colored gemstones and jewelry, and books on all aspects of geology and the earth sciences. I became interested in minerals when I was eight years old and living in the San Diego area. Growing up I read everything I could find on geology, oceanography and archaeology. My family moved to Connecticut when I was in middle school and when I got my driver’s license I would go explore old mines in New England.

I went to the University of Rochester and received a double major in Geology and Anthropology. During that time, I spent one semester at a marine research laboratory in St. Croix, one summer on an archaeological site in England and another summer at an excavation in Teotihuacan, Mexico. I also worked in the Geology Library at the university and helped a local museum organize and identify their mineral collection. During my time in Rochester, NY I was collecting minerals and fossils at various locations, as well as starting to develop a geology library for myself.

After I graduated from college I moved to Las Vegas, Nevada (1979) to find work as a geologist. While looking for a job in my field I took a job as an apprentice bartender at the Silver Slipper Casino. While working at the casino I got to know a customer who it turned out was Wayne Newton’s jeweler.

When he learned of my educational background he encouraged me to study gemology. I took a colored gemstones course at the Gemological Institute of America and was hooked on gemstones. Still looking for work as a geologist, I then spent some time working for a large retail jewelry chain where I learned that high pressure sales and inferior quality gemstones was not for me.

My first job as a geologist (1981-82) was working at the Billie Mine in Death Valley, it was a large underground borate mine that was owned by a subsidiary of Owens Corning Fiberglas. We mined miners for making fiberglass and heat resistant glass like Corningware and Pyrex. I was able to collect some great mineral specimens while working at that mine, which closed permanently in 1996.

I spent the next few years working for the University of Nevada’s Desert Research Institute and various mining companies as an exploration geologist looking for gold in Nevada and California. By this time, I had started to sell minerals that I collected myself in the field and geology books that I acquired from collectors and small libraries. I started my first business in 1983, selling at gem & mineral shows and through mail order. I also bought and sold gemstones, many that I acquired from gem cutters which were used in custom jewelry.

In 1988, I was offered the opportunity to create an office in Las Vegas for the Nevada Division of Minerals. I ran that for 16 years and was involved in government and legislative affairs, public land issues, abandoned mines, and public outreach and education on mining and mineral resource issues. During this time, I continued to pursue my part-time business and continued to build and inventory of minerals, publications and gemstones.

In 2000, I opened my first “store”. It was actually a warehouse space that was open by appointment in Henderson, Nevada. After I left government service in 2004 I worked as a geology consultant and used my store as an office.

I increased my retail and trade show business, as well as did some consulting. I put the store on hold in 2006 – 2008 to work as a project manager for a company involved in exploration for uranium, gallium and germanium. I was living in Las Vegas, working out of Tucson, and my projects were in Arizona, Illinois, Indiana, Kentucky and the Czech Republic.

In 2009, I went into renal failure and began had to retire from geology as a career. I relocated to Orange County and opened a retail store in Orange, CA. which combines minerals, fossils, decorator items, books and custom jewelry. After eight years on dialysis, I received a kidney transplant in 2016.

Overall, has it been relatively smooth? If not, what were some of the struggles along the way?
Early on, my biggest challenge was juggling a very busy professional career in mining and government with my part-time business interests. I traveled extensively, and also had a family.

In more recent years, dealing with a very serious medical condition was coupled with a severe downturn in the economy. I opened the store in August, 2009. That was also the month I started dialysis which I did for eight years. Between the tough economy and dealing with dialysis and a host of medical issues, it was not clear that the business would survive.

Alright – so let’s talk business. Tell us about Nevada Mineral & Book Company – what should we know?
I developed my business to be a one-stop shopping experience for people interested in geology, the earth sciences, minerals, fossils and gems & jewelry. We have an extensive collection of minerals, fossils and decorator items in all price ranges. We have crystals for people interested in the metaphysical aspects of minerals and gems. We are custom jewelers who can make pretty much anything in silver, gold and platinum using quality gemstones. We have a lot of affordable items for children and beginners who are interested in rocks and minerals. And finally, we probably have the largest inventory of geology and earth science publications and maps for sale in the North America.

As a geologist, I work hard to give people authentic products at a fair price. We source our inventory world-wide, and get many items from the people who mine them. I provide factual information on what things are and where they come from. I want my customers to know and appreciate what they are buying, especially the minerals and gemstones, because so many things are treated and many retailers do not know or do not disclose this information.

I am most proud of the fact that we have a great many repeat customers who trust us and are very happy with the information, quality and value that they receive.

Any shoutouts? Who else deserves credit in this story – who has played a meaningful role?
I have been blessed to have very supportive family and friends along the way. When I was just starting I had several geologists and mineral dealers who encouraged me and gave me advise. My chance meeting with Wayne Newton’s jeweler started me on a path in gemstones. I had a very good friend in the publishing business who helped advise me on the book business.

In recent years, with all my medical issues a number of friends, family and even my landlord helped me deal with the health issues and/or allowed me to keep the store open. I am especially indebted to my partner (and jeweler) Christie for encouraging and supporting me through the worst of my health issues.

I am also thankful to have had such wonderful and loyal customers over the years, many of which have become good friends.