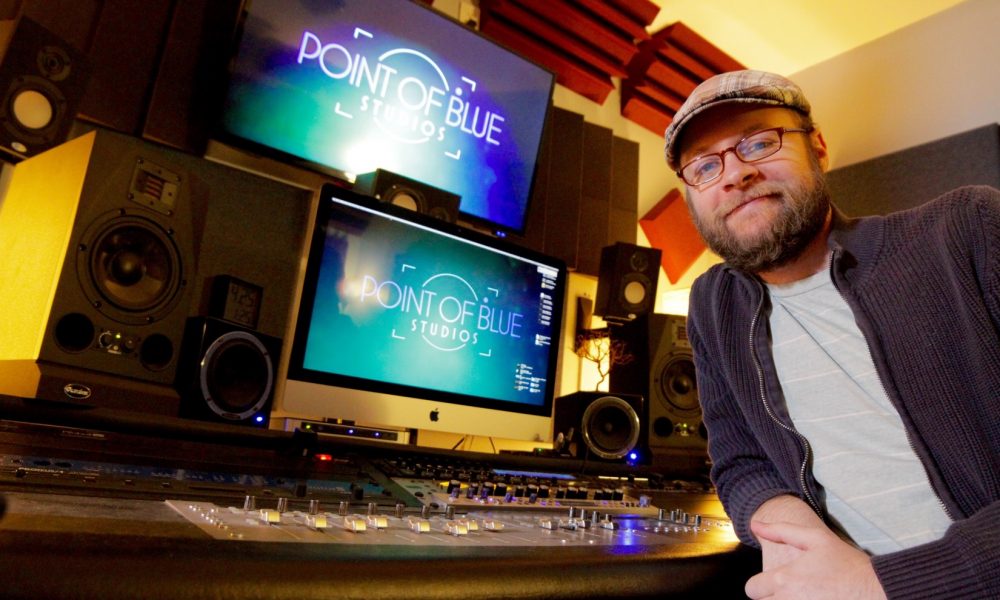 Today we’d like to introduce you to W. Alex Reeves.

W. Alex, please share your story with us. How did you get to where you are today?
I was born in New York City and moved to the suburbs of Chicago when I was 6. My dad was a recording engineer who recorded acts like ZZ Top, Greg Allman, Lou Reed and hundreds of others in New York in the 60s and 70s–he’s got some amazing stories–so I grew up in his studio learning the trade. He taught me everything from how a microphone works to signal flow to how to get a great performance out of a singer. When I was around 10, I got a bunch of my dad’s hand-me-down gear, and he helped me build my first studio in my mom’s basement. I recorded my friends’ bands there all throughout high school. At some point, I started fooling around with recording sound effects around the house: doors creaking, my dog barking, birds outside. I’d start playing them back to picture and videos and discovered the art of sound design (I had no idea what it was called back then). As a side project, I spent a couple of years in high school creating the soundtrack to a comic book I had bought. I mixed in music and sound effects and then recorded my friends doing all the voices of the characters. Then I scanned the pages of the comic into the computer and taught myself how to edit them into a movie to the audio track. It turned out pretty cool. I loved the whole process and became super interested in filmmaking from then on. After high school, I went to a small liberal arts college in Pennsylvania where I studied communications and media criticism and did a lot of theater. I also met my wife there. I moved out to LA right out of school to pursue directing and ended up landing a gig as a post-PA on a reality show. So, I worked my way up the post-production side of things to assistant editor and ultimately got my first editor credit on a show by the time I was 23. I stuck with editing for a few years (until I couldn’t stand working on any more reality TV shows) and then used all the money I had saved up to open up Point of Blue Studios in 2011. It started as a small post house in Hollywood where I did editorial and sound mixing work, and eventually, I began producing big corporate industrials and documentaries for non-profit NGOs. I moved the business up to Burbank in 2013 to work with some friends of mine who had just started a company called RocketJump doing big-budget internet videos and TV. I directed my first short film somewhere in there, too. In 2015, I moved into the facility I’m at now in North Hollywood, where I’ve got a lot more space to stretch out and work on multiple projects at a time. I’ve also begun doing a lot of work in Virtual Reality with companies like Magnopus and Samsung. This year, I’m directing my second short film and developing a new original television series. I’ve also got a feature film in the works, too.

Has it been a smooth road?
Running a production company by yourself is really difficult. I’m not a natural “hustler” or salesperson, so balancing all the networking and promoting and marketing with the creative parts that I love is definitely the biggest struggle. Building a studio by yourself isn’t easy either. Since I’ve moved my business three times over the last six years, I’ve had a lot of opportunities to improve the capabilities of the studio with every new space. Between soundproofing and treating every room, to wiring everything and making sure I have all the same capabilities of bigger post houses, it’s a never-ending process of improvements and upgrades to keep up with clients’ demands. Keeping up with the latest gear and software is a full-time job in and of itself. Once I land a client or a job, though, I’m good at keeping that relationship and everyone in it happy. Boutique production companies survive on word of mouth, and that takes a long time to build up, so the hardest part is figuring out how to stay afloat in the meantime. Being able to jump between different types of jobs helps a lot, so staying flexible and having a versatile skill set is super important.

We’d love to hear more about your business.
Point of Blue Studios is a full-service production and post-production studio. We do everything from development, pre-production, production, and post. Most of our clients are ad agencies, video game companies, and other studios coming to us for sound-for-picture work (i.e. sound design; re-recording mixing for web, TV, and film; voice-over recording; ADR). We also produce projects like commercials, music videos, and web series. Because we’re built around a post-production facility, we can develop, shoot and finish all our bigger productions in-house. Having everything under one roof makes us pretty nimble. We can cover just one phase of a project or the whole thing.

Over the last year, we’ve started doing a lot of work in Virtual Reality. Because we have a nice ProTools|HD 5.1 surround mixing suite, we’ve worked on a lot of big VR projects creating the spatial audio soundscapes. We were fortunate enough to get in early on the VR game and help develop some best practices when it comes to working with sound in a 360-degree environment. We’ve recently gotten into consulting on projects that are looking for a more immersive sound experience, as well. Sound really plays a huge role in the VR world.

Is our city a good place to do what you do?
I think this is the only city for a business like mine–for post-production especially, but also for filmmaking in general. You can set up a production company anywhere in the world, but you won’t have the enormous pool of talent that you have here. It’s the people that you work with that make a career in this industry any fun. When everywhere you turn you’re surrounded by people who are experts at what they do, it keeps you inspired and motivated to do your best work. There’s an endless supply of work here if you can figure out a way to snag it. It’s easy to get caught up in trying to “live the dream” (I’ve been here over 10 years and I’m still trying to figure out what the hell that means), but I think as long as you stay honest with people and stay focused on creating the best possible version of whatever it is you’re working on, you can really achieve some amazing things. I just know that you have to love every single ounce of this business if you’re planning on succeeding here. It’s certainly not for the faint of heart.