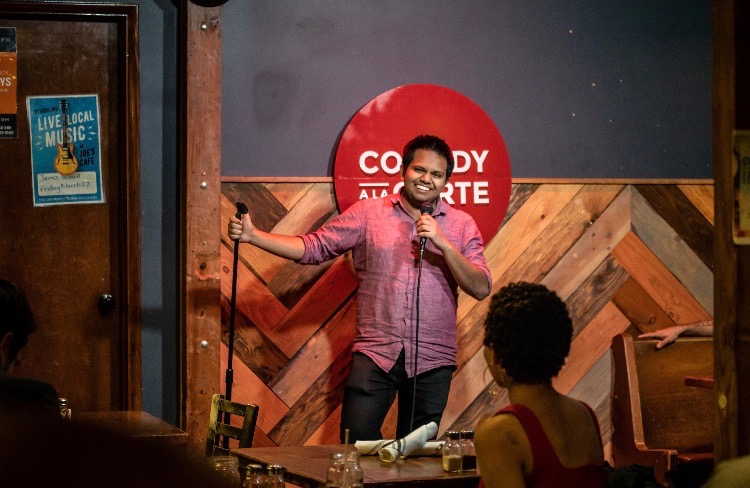 Today we’d like to introduce you to Vinayak Pal.

Vinayak, please share your story with us. How did you get to where you are today?
When I was younger, I always loved making people laugh because of the positive effect I created made me feel great. I never thought of being a comedian because I never could fathom being on stage cracking jokes. It was a scary idea. Most of my family and community wanted me to be an engineer or doctor, but those options were not for me. I didn’t want to end up as a stereotypical Indian guy.

One night when I was 16, I saw YouTube videos of Russell Peters, Chris Rock, George Carlin, and Gabriel Iglesias. I was on a complete comedy binge. I loved it! I decided after watching these comics do it, that I wanted to do it too! Russell’s jokes really inspired me because it was a style that I loved and I related a lot to his humor. So, I told my mom, and surprisingly she was very supportive of the choice. During high school, I wrote jokes and performed at school talent shows. I got in trouble most of the time for my material, but it was an overall fun experience.

After I graduated high school, I attended Emerson College for their new Comedic Arts program. While there, I started performing at open mics and shows, and I had a fun time in the Boston comedy scene. I started my own show at Emerson called Wicked Funny, and now, I run it in LA as Wicked Funny LA. The best part of being in Boston was working for the Boston Comedy Festival. I met a lot of amazing comedians who had specials, were on TV shows, and toured the country or the world. I had so many opportunities to talk to these comedians and get advice on how to progress in my comedy career. There was so much that they told me, I decided to write a book on it called “Comedy Is No Joke! The Stand-up Comics Guide to Success.” It got published and I won The New Face of Comedy Award for it.

After my first year of Emerson, I decided to go to LA and study at a small business school there and explore comedy too. It was a great decision. I met so many amazing comedians, and I have been on many shows. The scene here is competitive, but that’s how I like it. It’s no fun if something is just handed to you. While I was 19, I had passed at Flappers, The Ice House, and the Comedy Union. I also had gotten the opportunity to be on radio four times! Twice on SB Nation and twice on Frazer Smith’s Radio Show on 95.5, and right before I turned 20, I performed on the local Pasadena TV channel. Plus, I meet supportive comedians and helpful comedians here all the time. It’s really fun.

My most momentous journey in comedy thus far was touring India with the Boston Comedy Festival. I closed a sponsor to provide funds for this tour and partnered with a production company to book venues and local acts. It was the first time I helped produce a tour and perform on one. The coolest part was that I became the youngest comedian to ever tour India! I was so elated by this accomplishment. I met many hilarious comedians who had specials and a huge following in India. Watching them gave me an idea of what the standard is at that tier, and it just motivated me to write and perform more. After the tour in India, I got a spot at the Kolkata Comedy Festival performing in front of 300+ people. This whole experience was life-changing and so much fun!

Right now, I am helping the Boston Comedy Festival produce more tours and expand its festival while performing in LA. I am focusing on creating more material and honing my craft. My goal is to implement comedy in business to create funny marketing material, sales pitches, and ads to help raise profits, and to tour more, and to also produce my own TV show. I am working hard to do this, and I am happy I decided to take on this path instead of medical school. Best decision I have made so far!

Overall, has it been relatively smooth? If not, what were some of the struggles along the way?
It’s not been a smooth road. There have been a couple of times I wanted to quit because I felt that was no path to success in this industry. That changed as I got better, and started creating opportunities like the India tour.

I think the biggest obstacles were in the production of the India tour. I found the biggest comedy club chain in India, Canvas Laugh Club, and they were interested in co-producing this tour, but they didn’t have the money. So, at 19, I had to find a sponsor in India and propose a budget that would have to get approved by the corporate office. Thankfully, I found Diageo an alcohol distributor, and they wanted to take on this opportunity. Once the budget was approved, the Canvas Laugh Clubs went out of business… So, I had to find a new co-producer, and I found Counter Culture. The new issue was that Counter Culture changed the budget, so we had to get that approved, and after a couple of weeks, we did. Then, we started rolling on producing this tour, and it happened!

What do you do, what do you specialize in, what are you known for, etc. What are you most proud of? What sets you apart from others?
I am a stand-up comedian, and that is my enterprise. My accomplishments as a comedian are being the youngest guy to ever tour India, get on radio 4 times, been on the local Pasadena TV channel, performing at the Kolkata Comedy Festival, and writing an award-winning book on stand-up comedy.

What sets me apart is that I try to make anyone from any background laugh, even if your views are totally opposed to mine. I believe every person needs to laugh, and if I can make people laugh are totally different than me, that’s a major accomplishment.

My goal is to expand this to providing comedic marketing, sales, and training, and create comedic films as well.

Any shoutouts? Who else deserves credit in this story – who has played a meaningful role?
Craig Fox is a comedian from NYC. He told me how to start, and how I could start my own show, which helped boost my career.

Jim McCue is the producer of the Boston Comedy Festival, and he showed me the business behind comedy and how to produce a big festival. He also toured with me in India.

I would like to thank the Delphian School and Delphi Academy for providing me a great educational foundation which has been the greatest resource for me in my career.

I would like to acknowledge Meir Ezra who is an amazing life coach, and with his teachings, I have achieved many accomplishments that I am extremely proud of.

The Sathya Sai Organization in San Jose has been a family to me since I was young, and they have come out to many of my comedy shows, and I appreciate all their support.

Tamra Meskimen provided me a venue to run a comedy show at, The Acting Center. 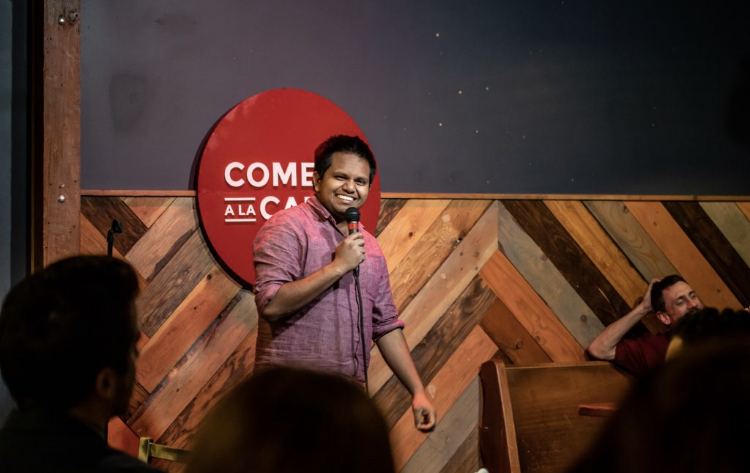 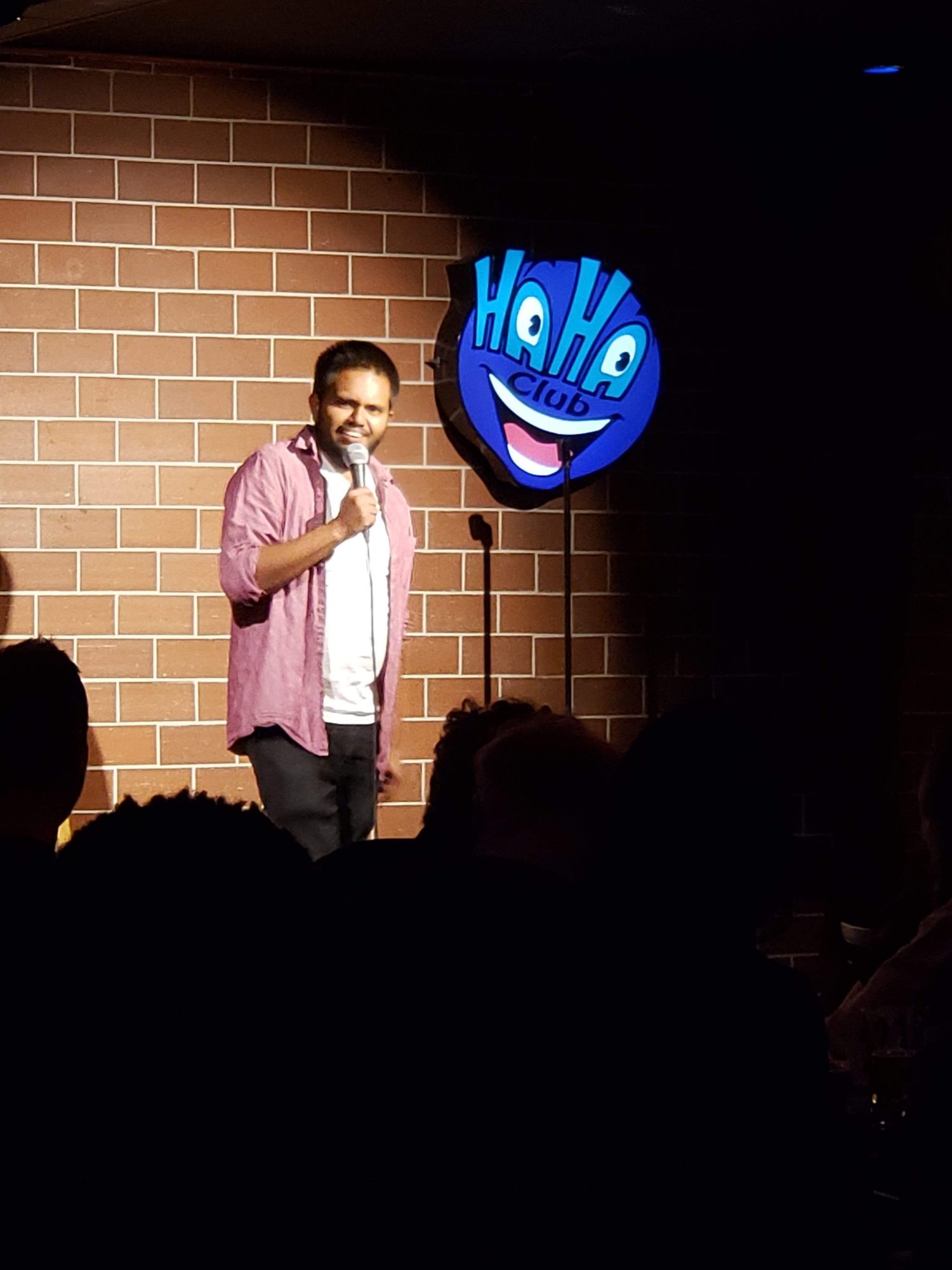 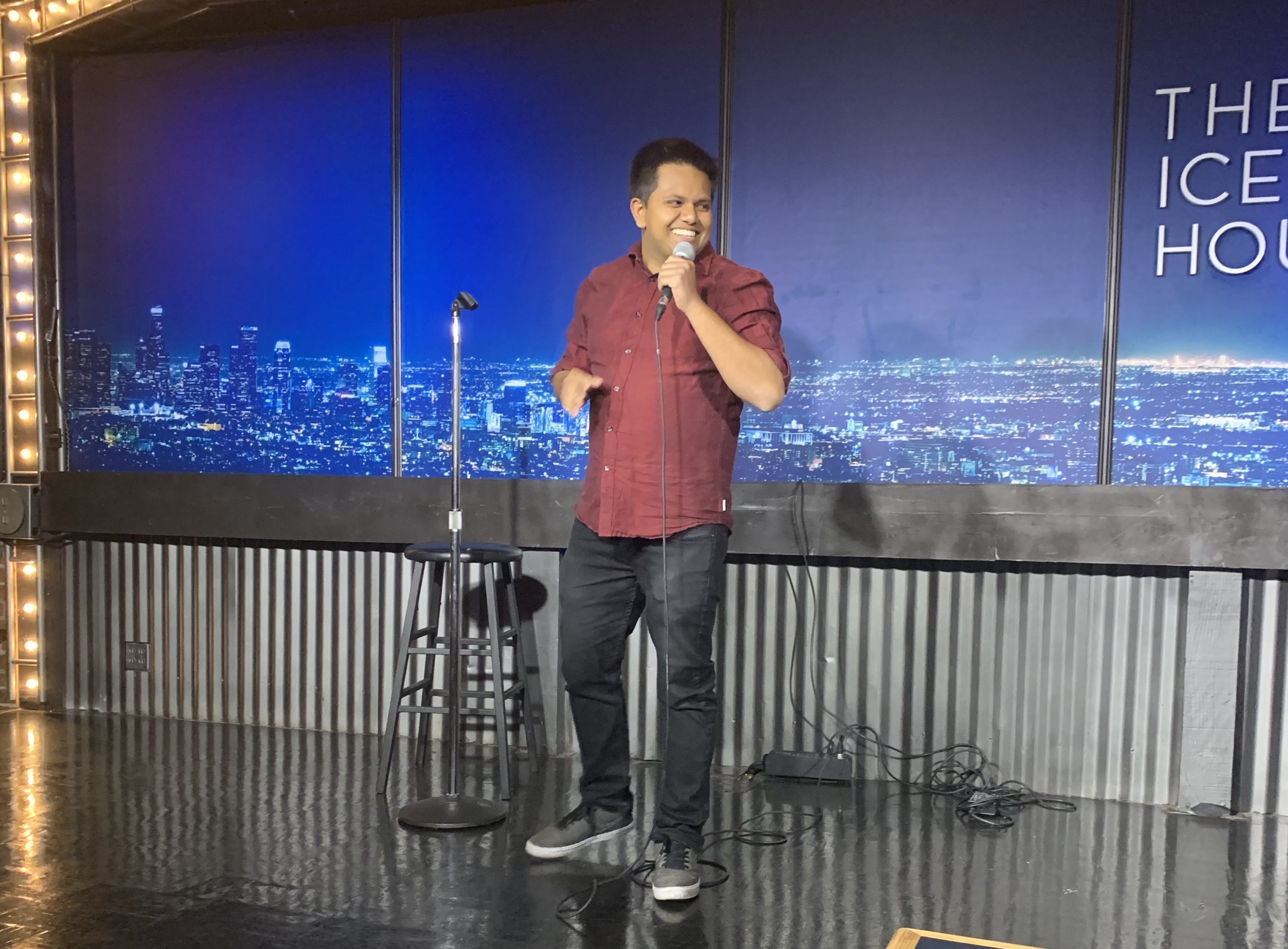 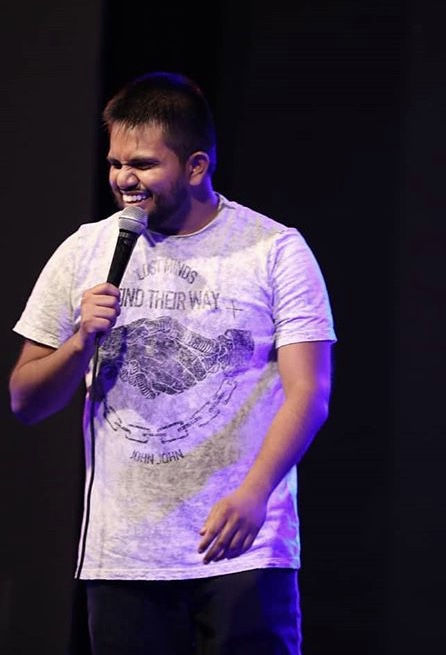 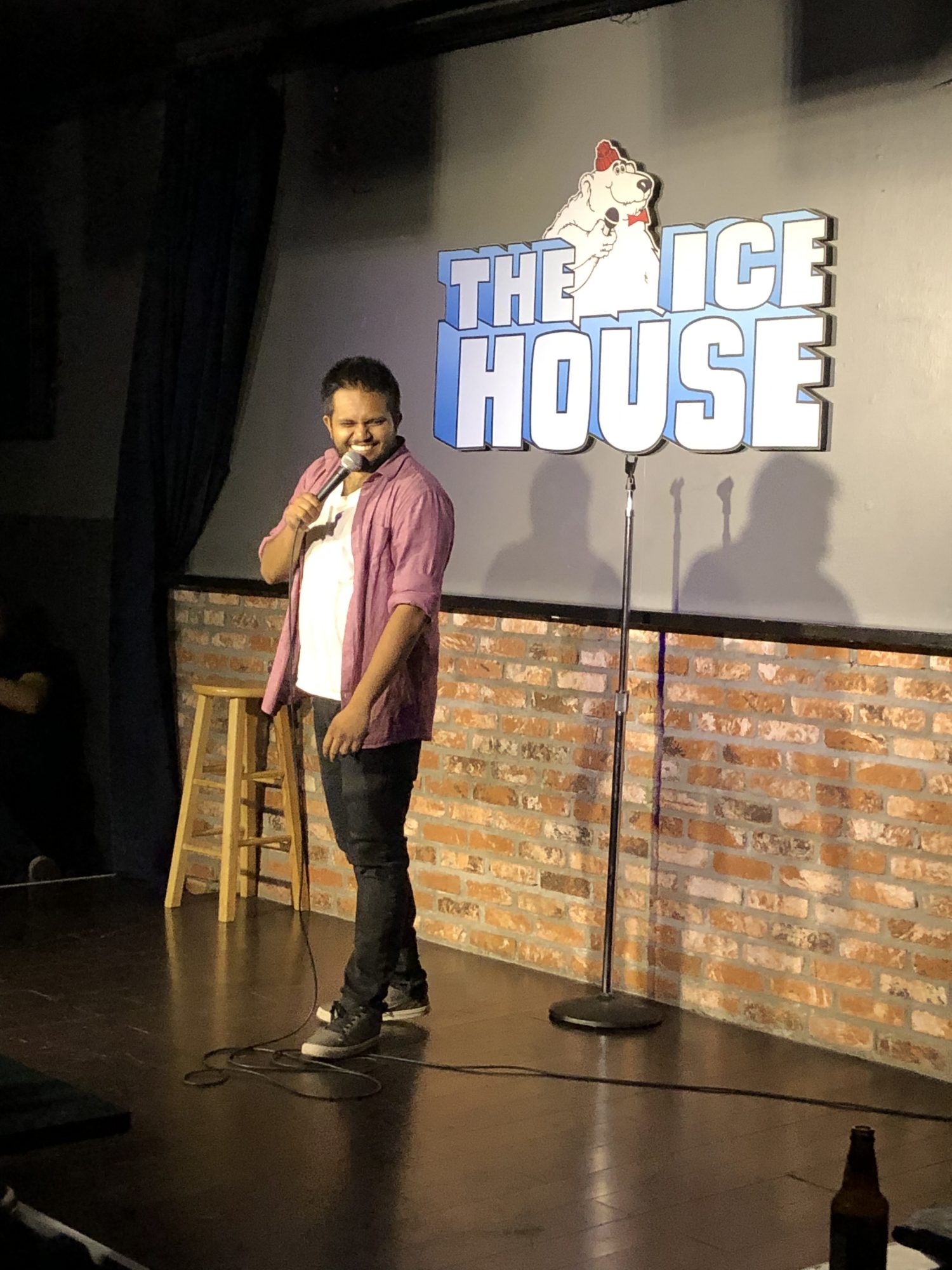 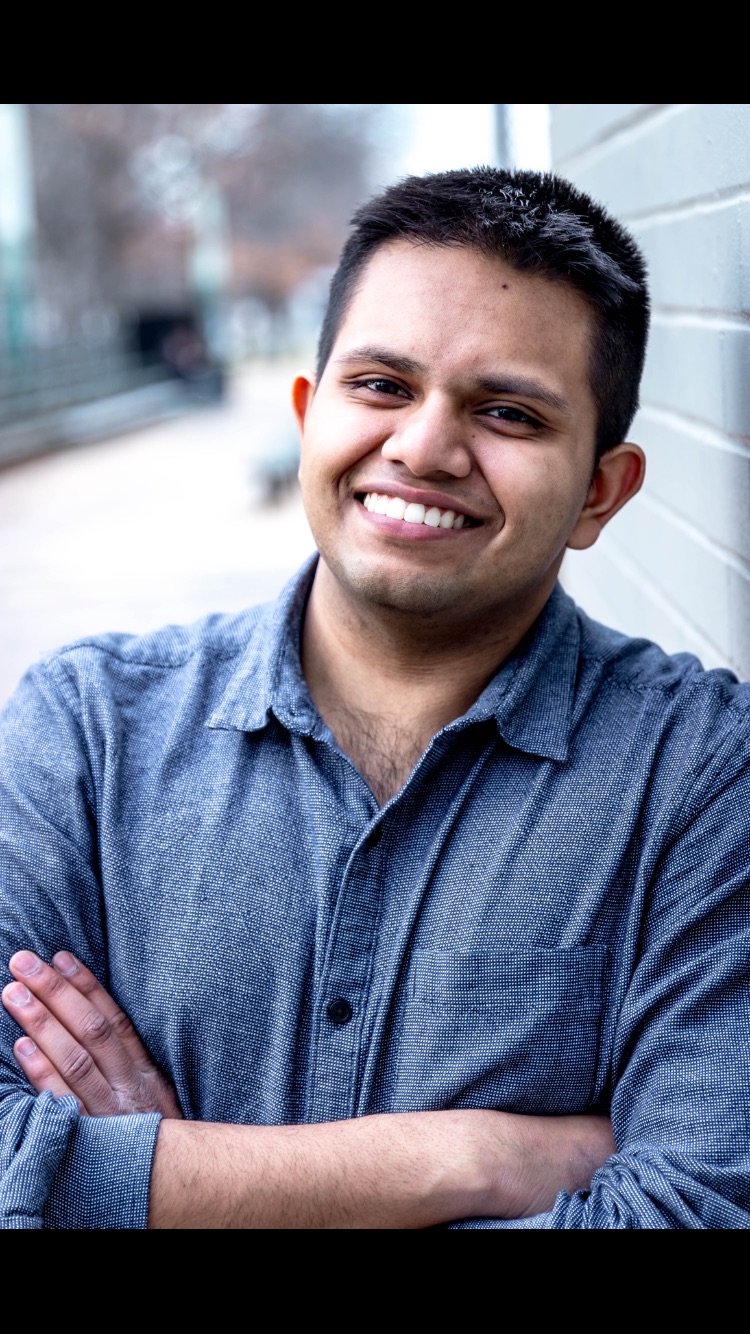