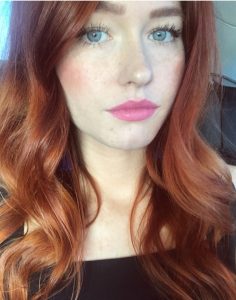 Today we’d like to introduce you to Veronica Walsingham.

Veronica, let’s start with your story. We’d love to hear how you got started and how the journey has been so far.
I earned a BFA in Writing for Film and Television from University of the Arts in Philadelphia, PA. Upon graduating, I knew I’d probably have to move to Los Angeles or New York City to find a job that was somewhat related to my studies, though that conundrum might be less of a problem for students graduating now with how much the internet has helped democratize the entertainment industry. Anyway, I moved to Los Angeles with Eric Walsingham, to whom I’m now married.

I was determined to get a job in the entertainment industry and reached out to every contact I had, which was pretty much no one. Fortunately, a woman I had worked with at my unpaid internship put me in touch with her daughter, who worked at a production company that just so happened to be hiring. (The universe works in mysterious ways.) And suddenly, I became an executive assistant at a television production company, where I learned about production, how to connect an international conference call while driving on the 405, and that my boss was to never have cheese in any of his salads.

During my free time, I, like many people who have desk jobs, would read articles online, and I was like, “Hey, I could write these!” This was around the same time that I was feeling burnt out and unsure if the career trajectory I was on was right for me, so I left my steady gig as an executive assistant to pursue a not-so-steady, but much more fulfilling gig as a freelance writer.

In retrospect, I dove into journalism with absolutely no understanding of the industry, which made it difficult to find my footing. I’m really thankful to the editors who had turned down all the half-baked, very bad takes I had sent them while I was still learning. I didn’t realize it at the time, but those rejections were forms of grace granted to me by those editors. Now, I write for publications like The New York Times, Vox, Vice, and Playboy, but I still get rejections and I’m still thankful for them because not every idea I have is brilliant, though I’d love to think so.

I recently signed with a literary agent and am working on book proposal, so hopefully I’ll soon be diving into another industry with no understanding of how it works and begin the learning process over again.

Great, so let’s dig a little deeper into the story – has it been an easy path overall and if not, what were the challenges you’ve had to overcome?
I mean, no one thinks their road is smooth. I think we all like to see ourselves as the scrappy underdog that defied the stacked odds.

What else should our readers know?
As a freelance writer, I write about different topics for different publications. My main beat is the entertainment industry, though.