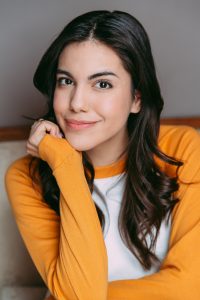 Today we’d like to introduce you to Veronica Long

Hi Veronica, so excited to have you with us today. What can you tell us about your story?
My acting journey started in Houston, Texas where I performed in musicals at the local community theater. I remember seeing the musical Carnival when I was nine years old and I was hooked! After graduating from Houston’s High School for the Performing and Visual Arts where I studied and performed musical theater, I moved to LA to attend the University of Southern California where I got my BFA in acting.

Shortly after graduating, I was introduced to the wondrous world of improv comedy in LA. I performed in monthly improv shows at the Upright Citizens Brigade and The Second City with an all Latinx improv group called Gringos. It was such a blast to perform with this mega-talented group! After two years, I decided to move to Vancouver, BC Canada where I’ve been lucky enough to work on numerous commercials for companies like T-Mobile, Amazon, Coca-Cola, and Lysol. I’ve also had the pleasure of working on TV productions such as CBC Gem’s Narcoleap and CW’s Supernatural. After being in Vancouver for a while I started to really miss improv and performing comedy in general. I also wanted to create some comedy content to provide a little levity during these politically heavy times. At the time, I was watching a lot of mockumentary comedies like The Office, Parks and Recreation, and Curb Your Enthusiasm — These shows were often the best part of my day! And I was also witnessing the craziness of politics in the US from the (somewhat) safety of Canada. Those two heavy influences lead me to write, produce, and direct a political comedy mockumentary web series called Vote for Janet.

In a nutshell, Vote for Janet is a comedy series about an out-of-touch woman with an inflated ego who staunchly believes she can become the next president of the US. This mockumentary follows her as she starts a grassroots campaign even though she has zero qualifications, no supporters, and no money. In its early stages, we started to workshop the main character, Janet, through improv- going to public places like convenience stores and filming Janet interacting with random people. Those shoots were a riot and we soon realized we could film a whole series by shooting it guerrilla-style (without film location permits) and all we needed was one person operating the camera. So I committed to the process of producing it as a short-form scripted web series. The stars really aligned to make this the perfect story to produce on an ultra-low budget. From start to end the whole thing cost about five hundred dollars to produce and it’s all shot and edited on an iPhone. The full nine-episode series is now out on Youtube and IGTV!

Alright, so let’s dig a little deeper into the story – has it been an easy path overall and if not, what were the challenges you’ve had to overcome?
I will begin by saying that this series has truly been so much fun to produce, write, and act in. That said, there were definitely some struggles in producing Vote For Janet, as there are with producing any independent project. The first struggle was actually deciding what to write and shoot! I had been writing scripts for a few years and every script would have either cost too much to produce at the time or would have involved resources (like a full crew) that I frankly didn’t have access to. Finally, the right combination of things happened to make Vote for Janet possible. This storyline about a low-budget grassroots campaign paired very nicely with the mockumentary style of filming, which meant we could get away with filming the whole thing on an iPhone. We could shoot in real locations, with no permits and a skeleton crew. I could even edit it on my iPhone with movie editing apps! All that made it possible for this show to get the green light because I could make it with the resources available to me right now.

Of course, filming on a shoe-string budget also comes with many challenges. It meant that I would have to take on a lot of the roles to cut production costs. I had to wear a lot of hats that I hadn’t worn before like producer, production manager, director, editor, location scout, etc. My brain likes structure and organization so having to teach myself new skills or solve different filmmaking issues that would come up almost every day without a straightforward blueprint or work-flow was definitely a challenge. Learning those skills took time and patience. Doing most of this work alone as well was also a challenge for someone who thrives in a collaborative environment. I learned quickly that producing an indie passion project on my own was going to be a long. Sometimes lonely process. The shoot days or co-writing days we such a blast in comparison!

That said, it was very fulfilling to wear all the different hats and having full creative control over the series was very satisfying! And seeing the response, the show has received has definitely made all those long days worth it! There were also parts of the process that I imagined would be challenging and ended up being a breeze! I was worried of the possibility of getting stuck in development hell or post-production limbo (where a film project can get stopped in its tracks because of a lack of funds or motivation to complete it). Thankfully that didn’t happen with this series and it was able to be completed and released! I think that was because this character and the story never ceased to crack me up. All throughout the process, thinking of the dumb things this character could say or do and situations she could get herself into made me laugh and that really kept me on track. Also showing rough cuts of episodes to my family and friends and seeing them laughing and really enjoying the show and even calling me to tell me their ideas for episodes was really fun and inspiring.

After one of those calls, I wrote in big letters on my production whiteboard, “Somebody out there needs this ridiculous content!” just to remind me of the whole reason I started this project—to make people laugh! Another aspect that was a tad daunting to me was directing. I had a very clear vision of what I wanted the show to be and I hoped that on the day of shooting, I’d be able to communicate that. But it was a lot easier than I imagined because – simply put – everyone that was cast was very skilled and immediately got the type of humor we were going for. It’s true when they say “Directing is 90% casting”! Tina Fey is quoted as saying, “In most cases being a good boss means hiring talented people and then getting out of their way.” That couldn’t be more true. On top of having a hilarious cast, my director of photography was incredible and somehow seemed to read my mind without me saying very much to him. So hiring the right people made my life a lot easier! And I’m super grateful for all the people involved in series.

Thanks – so what else should our readers know about your work and what you’re currently focused on?
I have always been drawn to comedy. Growing up, I was usually drawn to ridiculous, quirky, vivacious characters. From an early age, my comedy role models were Will Ferrell, Steve Carrell, Johnny Depp, Jim Carrey, Chespirito, Tyler Perry, Robin Williams and the list goes on. I did notice that most of my comedy role models were male (and usually white). In fact, in middle school, we put on a production of Willy Wonka and the Chocolate Factory and I played the part of Willy Wonka. (Fun fact: I think we ended up calling her “Wilimina Wonka” in the program, but I do remember liking that the character was kind of androgynous.)

Thinking back, I’ve always loved playing these kooky, fun, larger-than-life characters. I’d like to think this is my specialty, but it’s for sure where I’ve always had the most fun! I’m half-Mexican and I’m very proud my heritage. I will say, growing up without a lot of mainstream Latina comedy role models was a bit sad and disheartening. I didn’t see a lot of Latinx women in the kind of unique, absurd, or ridiculous comedy roles that I loved. If they were in comedy roles, they were usually playing Latinx stereotypes like the sexy Latina or the poor, submissive, blue collar Latina.

Thankfully the film/TV industry is starting to move away from these stereotypes and is telling stories that reflect real Latinx experiences. And while we always need more shows and roles that represent Latinx experiences, I also think it’s very important for Latinx people to be in roles that have nothing to do with them being Latinx. “Janet”, for example, is technically Latina because I’m playing her, but she has zero sex appeal and doesn’t fall into any other Latinx stereotype and I’m pretty proud of that. I want to help normalize Latinx people playing any role, especially unique characters that are far from any Latinx stereotype- both in comedy and in drama. Hopefully, Vote For Janet is playing a small part in that.

Any advice for finding a mentor or networking in general?
I’m very lucky to have so many people that have supported me along my journey so far. Both of my parents have encouraged me to pursue acting and performance. And my whole extended family including all my aunts and uncles and cousins has also been very supportive. That cushion of support has really lifted me up and been a huge source of confidence for me. I would consider all these people to be life mentors. I would also consider my partner, Spencer, a mentor. He was my main consultant for the Vote for Janet series and co-wrote most of the episodes with me. He’s brilliant and so quick at coming up with hilarious lines or scenarios and the show would not be what it is without him. I’m very blessed to have a live-in mentor that I really admire, haha. Additionally, I have a lot of people I draw inspiration from — mainly a lot of people in the entertainment industry, naturally. I would give you a list, but the list would be enormous! 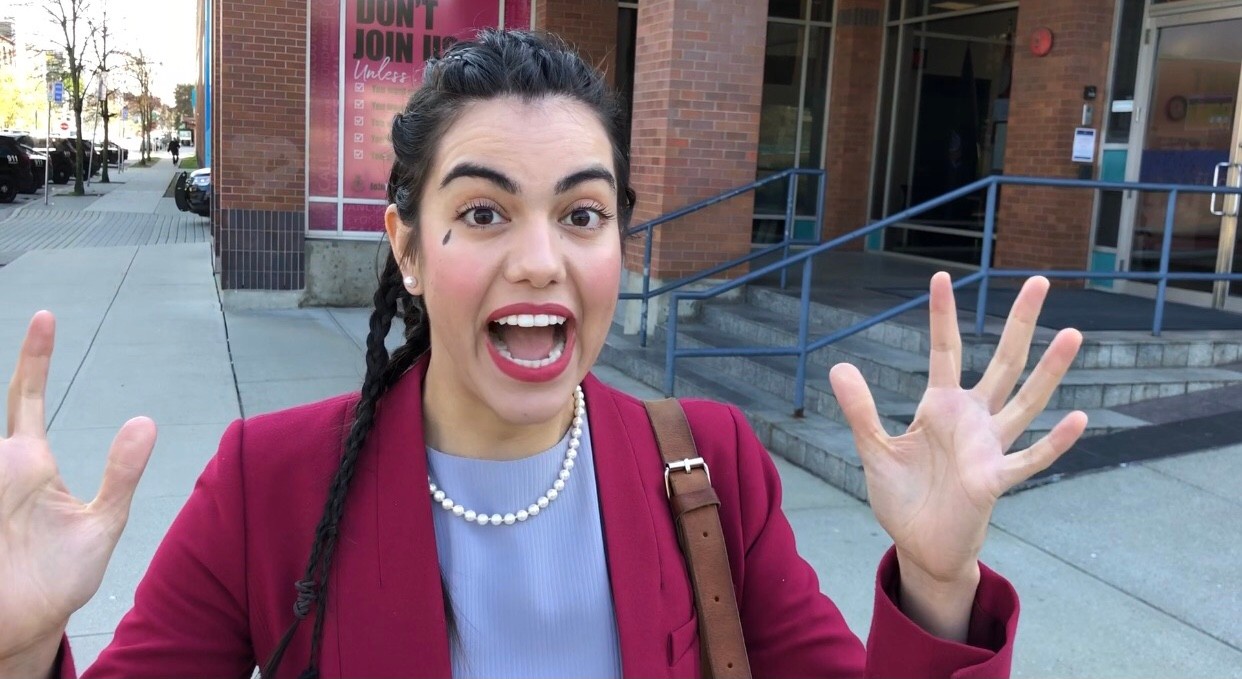 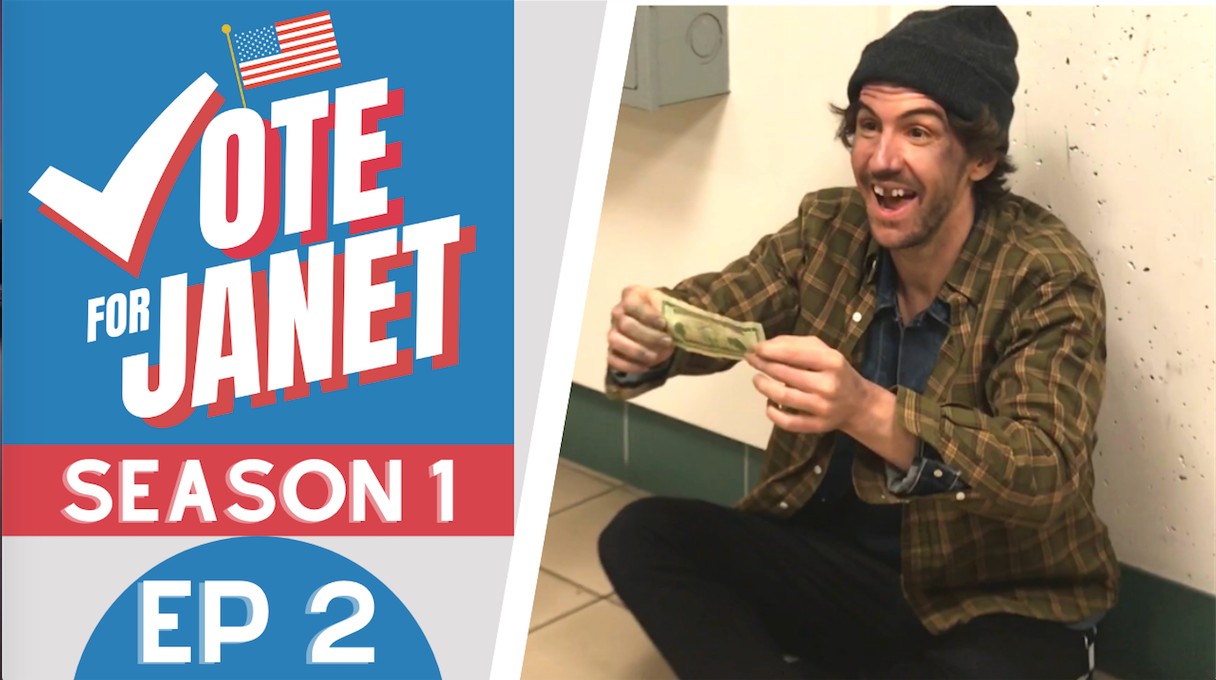 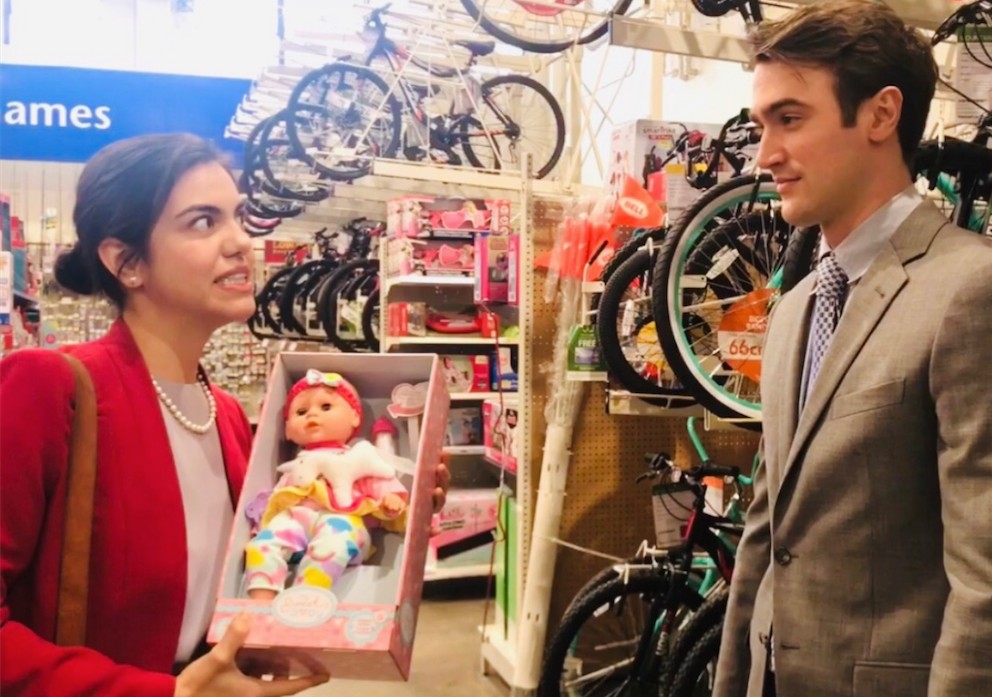 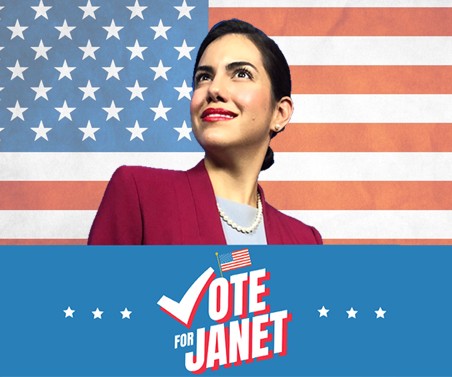 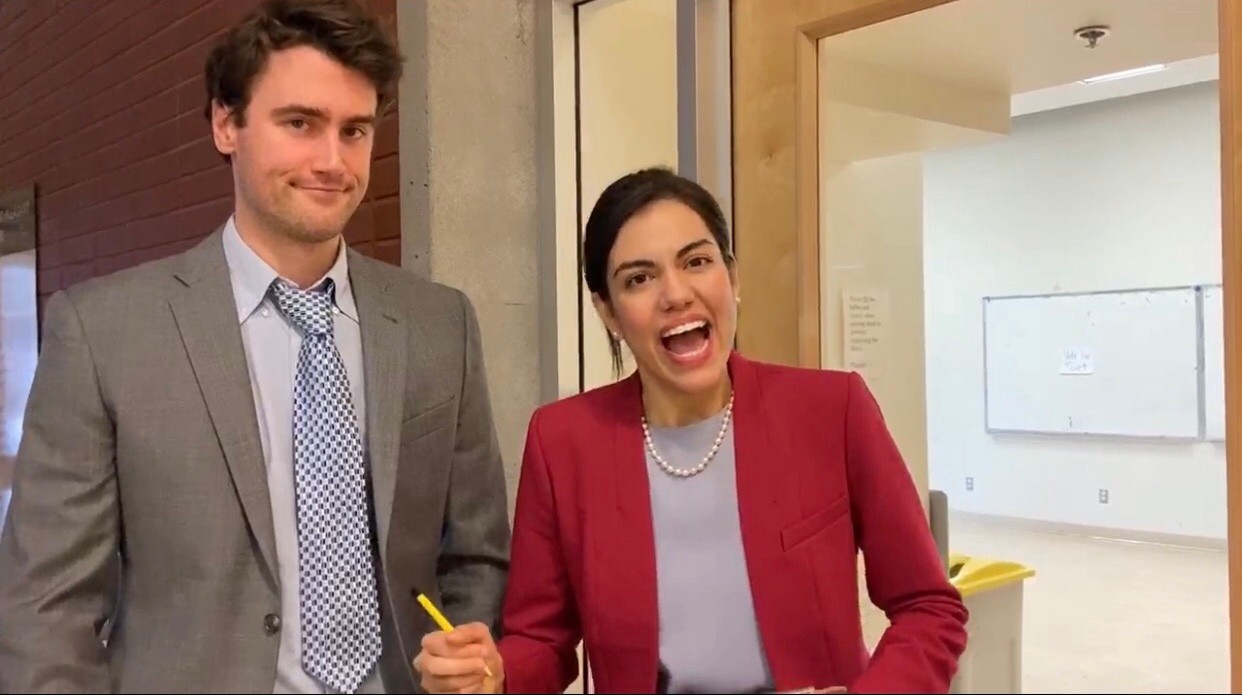 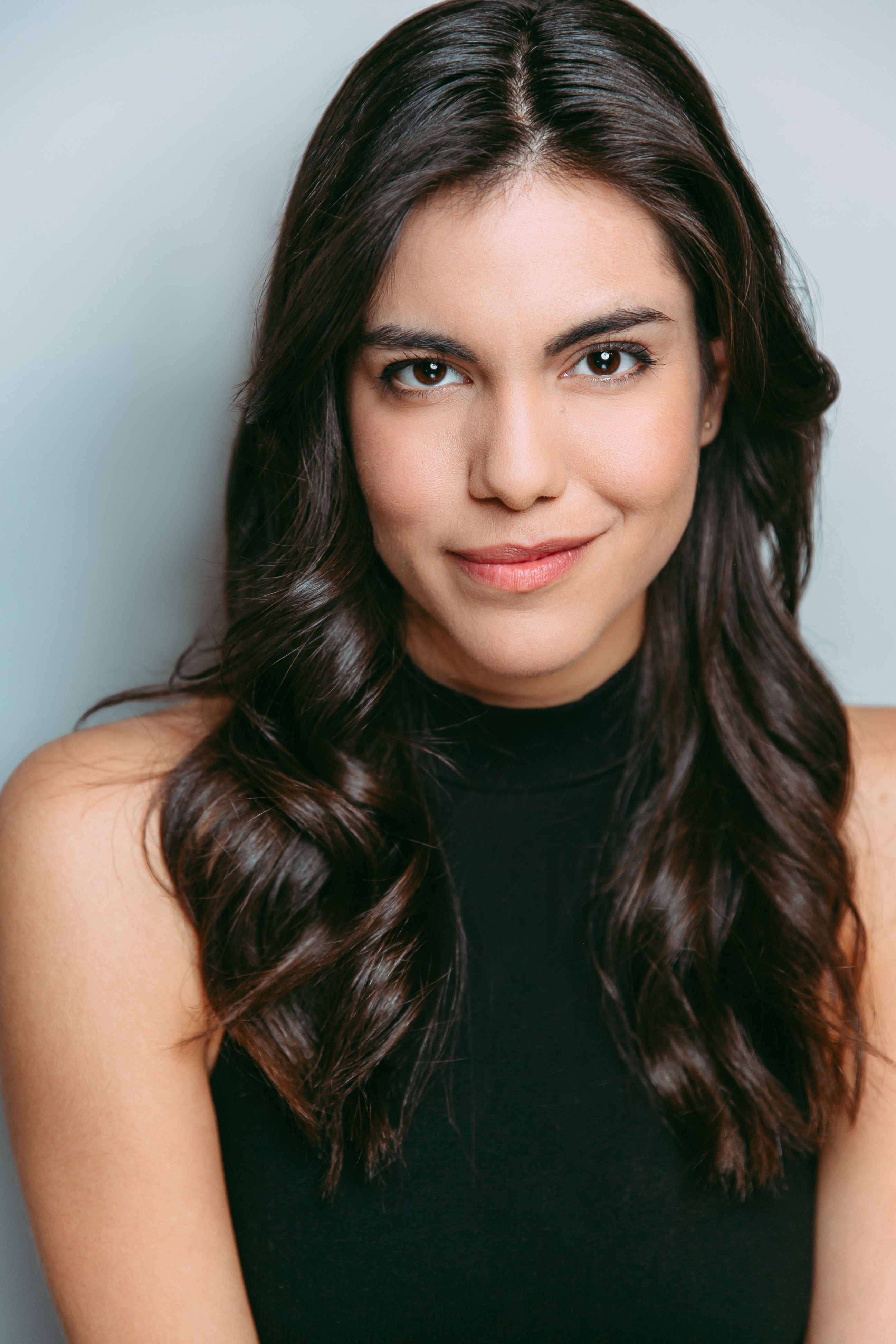 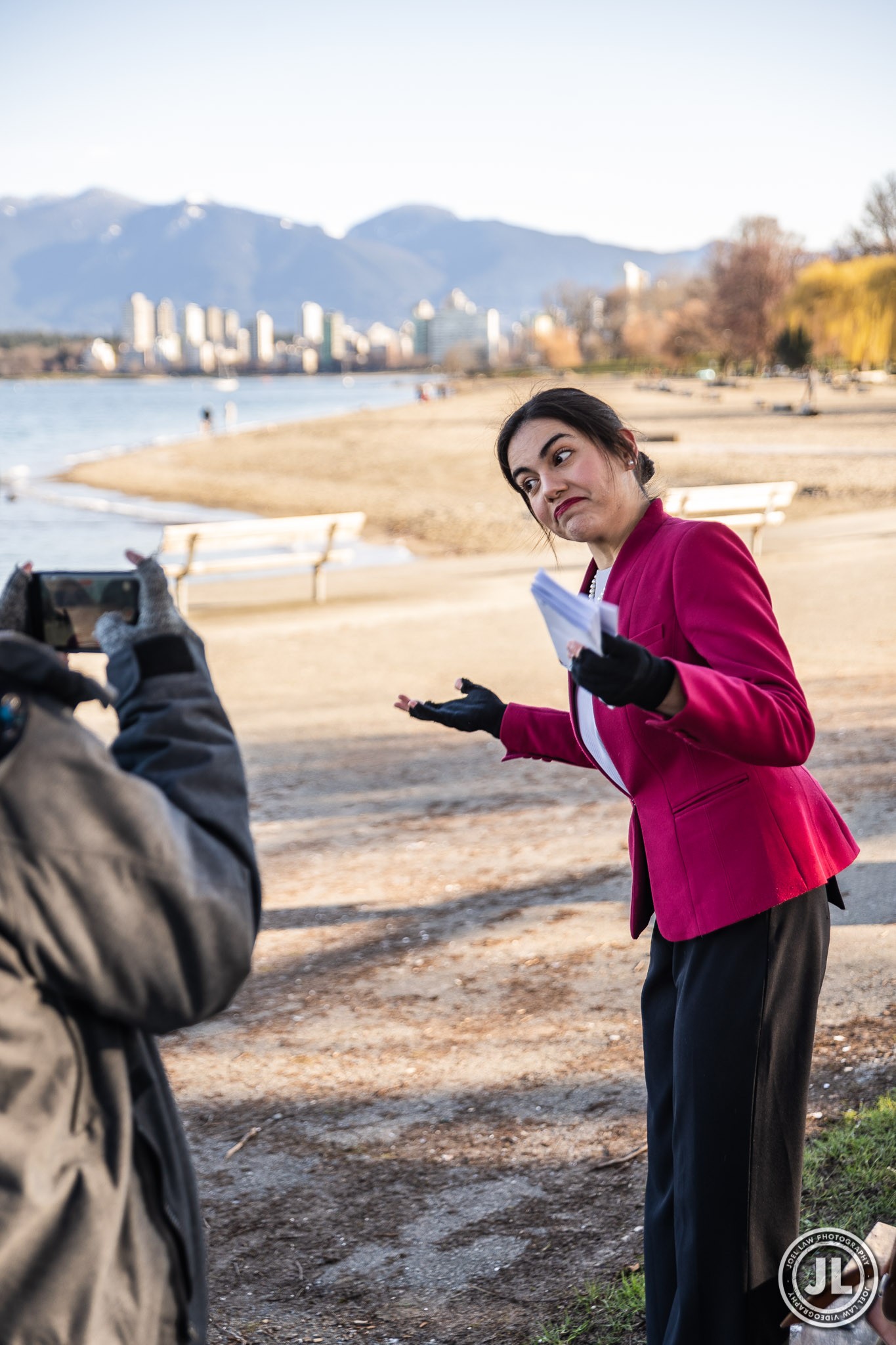