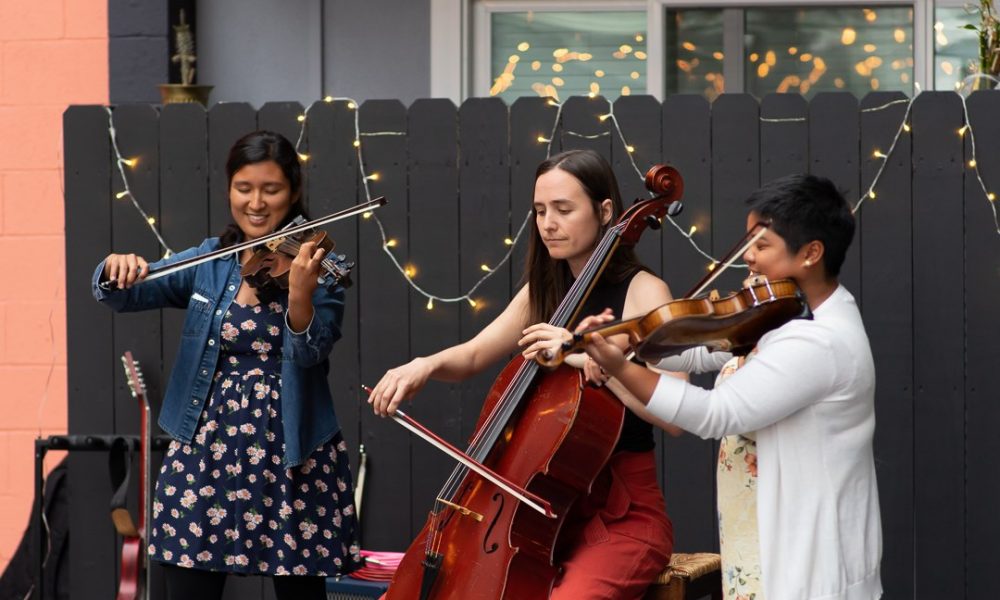 Today we’d like to introduce you to Elizabeth Chavez, Karen Peters and Angela Borlasa.

Thanks for sharing your story with us Elizabeth, Karen and Angela. So, let’s start at the beginning and we can move on from there.
It is not a usual sight to see classically trained string players singing while also playing their challenging instrument, but I was intrigued by the concept of a small group coming together to do just that. Towards the end of 2017, I mentioned the idea of this hypothetical “singing strings” group to my friend Karen, who is a cellist and a folk singer. However, as we were both going to be traveling for a few months, she let me know she was definitely interested in exploring the idea with me once we were both back in town. I did not know what this potential musical collaboration would become at the time, but sure enough, Karen reached out to me a few months later. Inspired by her sustained interest in the project, I was then eager to get started and had arranged a cover for the two of us in which she played cello, I played violin, and we both sang in harmony. It was not an easy feat. It took some time and effort, but once we locked it in we felt very proud and accomplished.

Shortly after that first rehearsal, I asked our beloved third member, Angela, if she would like to join us on viola and make a trio. I told her that we were in the process of learning how to sing and play well and that if she was down to work on practicing that with us, it could be a fun and satisfying experience. We then worked on a few covers and came up with the name, Her Treehouse–inspired by our wooden instruments and the space we’ve created for ourselves to make mistakes, play, and have fun. We have since filmed a handful of originals and want to eventually record a full album of our songs.

Overall, has it been relatively smooth? If not, what were some of the struggles along the way?
After making music together for about four months, Karen informed me that she would be moving up to the Pacific Northwest. She said she would love to make our group work still but would understand if she would need to be replaced. I did not have to think about it for too long, as I really felt that Karen’s energy and curiosity to even try this out is what brought us all together in the first place. So, we decided to be a long-distance band. We did not meet up during that first summer anyway as we were all traveling in some capacity and had planned to have our first band retreat up in Big Bear, California when we were all back in town. We had a handful of cover arrangements to work on during that time, and we found we really gelled well together in sharing a close space, with having a similar mentality of food and eating more plant-based and taking some time for ourselves. I think that really solidified how we were going to operate–from this space of intentionality and planning these retreats every so often as a way to hone our creative energy as a group.

Of course, there are some challenges that go along with that as well. It is not as easy as calling up a rehearsal to run through ideas or accept performance opportunities that come our way. We did our first live set with Sofar Sounds Long Beach earlier this year, and that was an extra special moment for us considering it had been a year since we first played together. We were so well-received, it was really validating to know that what we’ve been crafting behind the scenes made an impact on other people that night.

Please tell us about Her Treehouse.
We are a singin’ and stringin’ trio originating from Long Beach, California. We formed with the intention of experimenting with the technique of using classical string instruments to accompany our voices. As we’ve grown together musically as a band, we realized how much more we encompass as a group. We all believe in the importance of carving out space for yourself through spending time in nature, being environmentally conscious, cooking amazing food, and just feeling and experiencing all that life has to offer. It is through this space that we find each other during our retreats, and how we each seek to live individually as well. Music has a wonderful way of bringing people together, and ultimately that is what we seek–authentic connection with each other and authentic expression and connection to others through our music.

Any shoutouts? Who else deserves credit in this story – who has played a meaningful role?
Nicole Ilagan deserves major recognition for her incredible eye in both photography and film. She’s been mostly responsible for our online social media aesthetic as our main videographer and photographer. Barbara Barbato also did a wonderful job with our very first band photoshoot, and Carly Stone has also helped us with filming along the way, and our Tiny Desk Contest entry was actually filmed in her backyard! Lawrence Pi and Marc Encabo have also done an amazing job with lending their audio expertise when it comes to recording and/or editing. Jay Hemphill also deserves credit for loaning us his cello when Karen comes into town. Grace Babineau is an amazing artist and graphic designer and you can see her amazing, detailed work on our logo which you can find at the top of each of our videos. 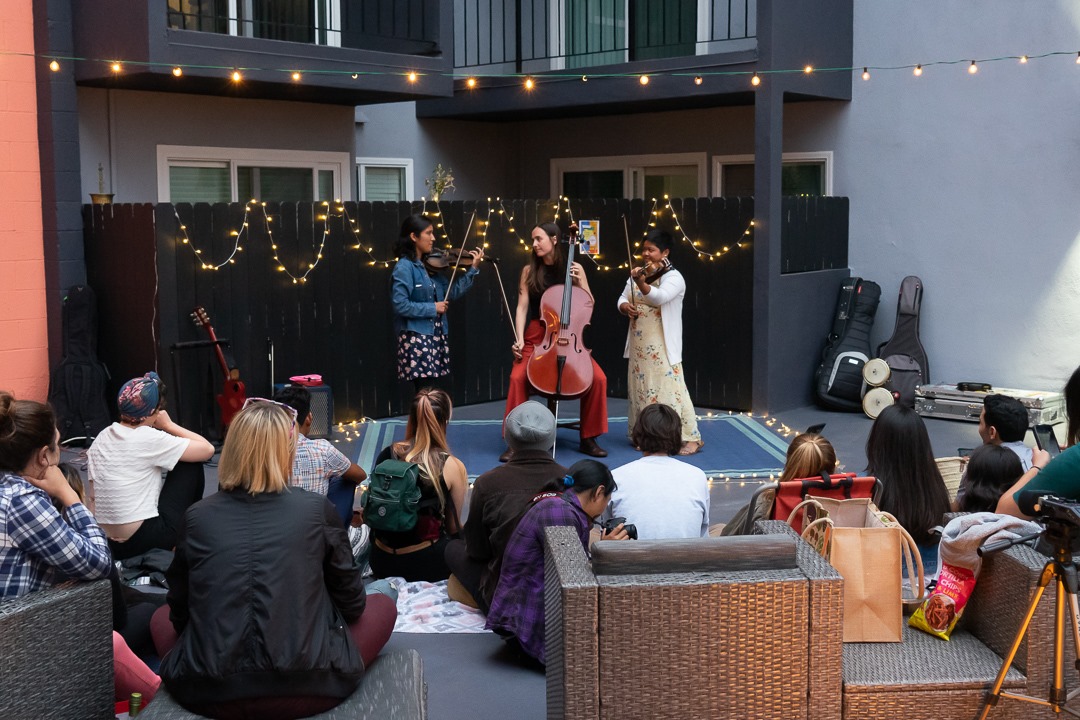 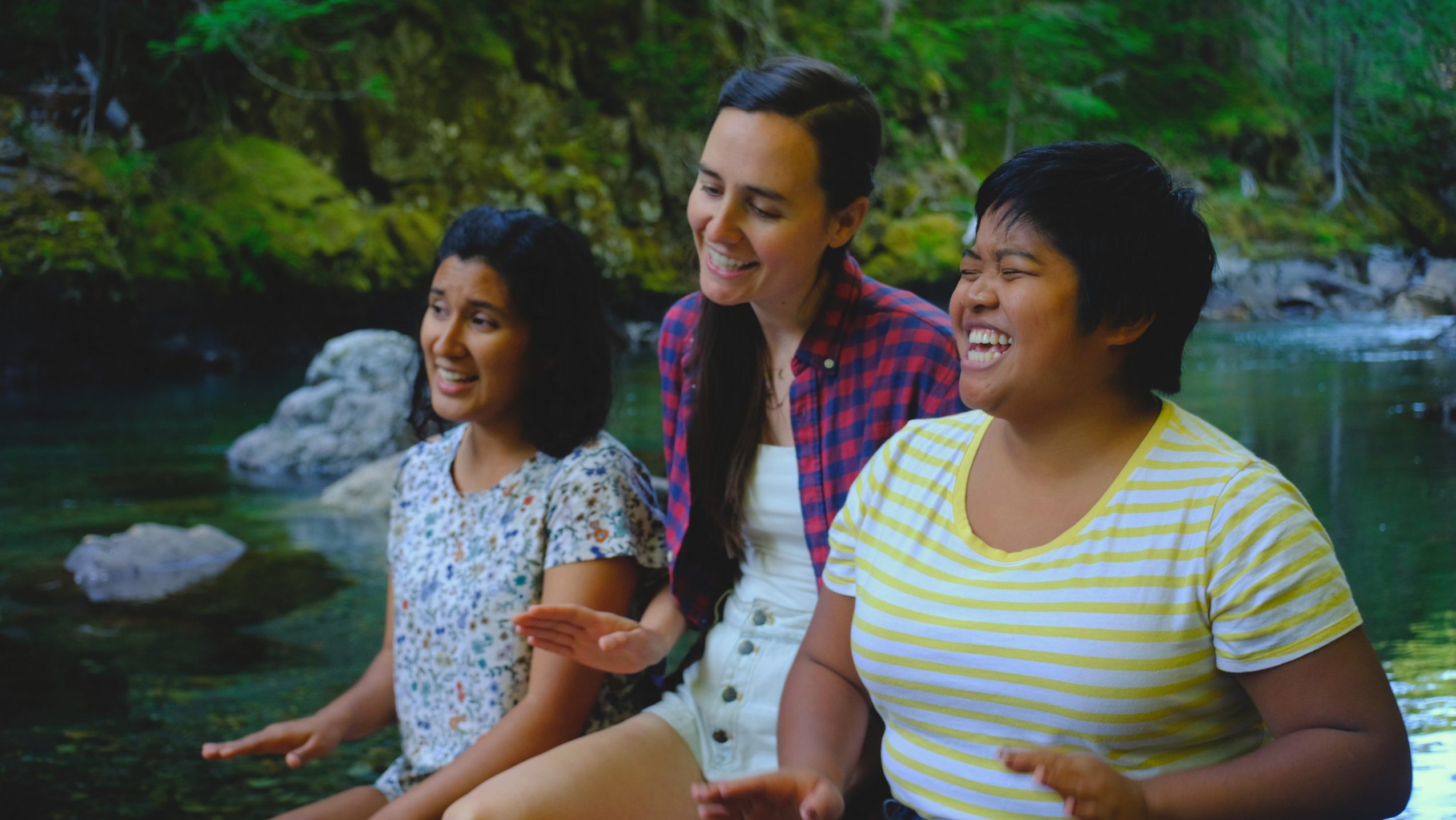