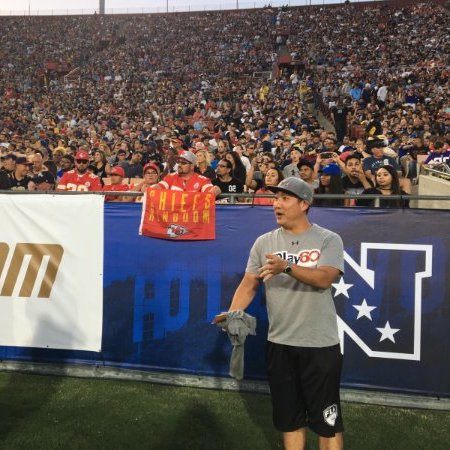 Today we’d like to introduce you to Tony Son.

Tony Son is the Commissioner for NFL FLAG LA Football. He was born in Dallas, Texas and was raised in Atlanta, Georgia. He is a 2002 graduate of Georgia Tech with a degree in Management Information Systems. Shortly after graduation, Tony attended the Game Face Executive Academy where he obtained his certification in Sport Sales.

Tony’s career in sports began in the NBA back 2004 as an Account Executive with the Atlanta Hawks. After much success with the basketball club, he made a move to the Atlanta Falcons in 2006 in order to learn the business of the NFL. After gaining further education with the football club, Tony then made a move to Southern California in 2008 where he took on his new role as the Director of Ticket Sales for the Orange County Flyers (Minor League Baseball). While learning all the aspects of sports in minor league baseball, the team just could not meet financial obligations forcing the baseball club to shut down making Tony reevaluate his career in sports.

Growing up, Tony played many sports and it wasn’t until college where he was asked by his student association to coach a women’s intramural softball team. Tony never coached before and embraced his new role. Tony’s team had gone to the finals 4 times while winning one championship. Coaching had become Tony’s new passion. After graduation, Tony went on to coach various adult recreation teams where he had much success. While he enjoyed coaching adults, Tony’s good friend suggested that he should try youth sports. Tony volunteered in youth basketball camps and went on to coach various youth flag football and youth baseball teams, and in 2008, Tony received the “Manager of the Year” Award by the East Fullerton Little League in Orange County. After he received this prestigious award, this was when Tony realized his dream to open a youth sports league.

After talking to his mentors and utilizing all of his experience in sports, NFL FLAG LA FOOTBALL was born in 2010 and has completed 12 successful seasons and many training camps. The League is currently running in it’s 13th season. Tony’s mission is to educate the children about football while emphasizing participation and sportsmanship. Players learn skills and lessons that help them succeed both on and off the field. NFL FLAG LA FOOTBALL plans on further expansion.

Overall, has it been relatively smooth? If not, what were some of the struggles along the way?
It certainly was not a smooth road as the League almost never happened. While we opened in 2010, we only had a handful of signups and was never able to start a League. This had happened about 4 times and I almost gave up, but then I pushed through and forced myself to keep at it. What I learned from starting up a business was that you have to be a little maniacal to really get it off the ground.

Alright – so let’s talk business. Tell us about FLAG LA – what should we know?
NFL FLAG LA is the premier youth flag football league for boys and girls ages 5-14 in the Los Angeles Area. The program provides young players a fun and exciting opportunity to engage in non-contact, continuous action while learning lessons in teamwork.

I oversee the entire operation which includes office day to day and game days.

In terms of what I am known for and what sets me apart, I like to let the public do that so read my Yelp page – http://www.yelp.com/biz/nfl-flag-la-los-angeles

What I am most proud of is that I get to see these kids and coaches grow through our program.

Any shoutouts? Who else deserves credit in this story – who has played a meaningful role?
I was very lucky as I have many people to credit for where I am at today. But to name a few,

My Dad – He taught me everything about life. He is a very savvy businessman and I learned all my skills from him

Don Ward – My first sports coach when I was 8 until about 15. he gave me my first baseball bat and I took off with it. Coach Ward recently passed away and I am dedicating our next season to him. If I never meet Coach Ward, NFL FLAG LA does not exist and I do not know what I would be doing.

I also like to think the friends I use to play sports with and the colleagues I worked with also definitely contributed to where I am today. There is too many to name but they know who they are. I will at least group them:
SMCS
Duluth High
Georgia Tech
Atlanta Hawks
Atlanta Falcons
OC Flyers
Talent Advancement