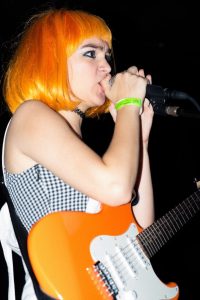 Today we’d like to introduce you to Taylor Blackwell.

Taylor, please share your story with us. How did you get to where you are today?
My name is Taylor Blackwell. I’m an actor/musician/artist/writer, amongst other things! I was born in West Palm Beach, FL, and raised in a Florida beach town called Jupiter. I started acting at age five, starting with theater and commercials, then student/short films, to TV/film credits. I went to a performing arts middle school called BAK, where I studied theater and took other arts classes – mixed media, tap dance, the art of cinema to name a few. I’ve always had a love of all things art – sketching/crafting with my grandfather for hours from a very early age. I had already been acting for several years by the time I got to BAK, but being surrounded by other artistic young people made me want to learn EVERYTHING!

Singing/dance/instruments, you name it! I was incredibly lucky to call Burt Reynolds a mentor of mine, who I met when I was ten years old. My first TV credit was one line on “One Tree Hill”, which I worked on when I was in elementary school. When I was in middle school I got my first big TV credit; a series regular role on the Starz original series Magic City. I continue to work on various acting projects. I moved to Los Angeles about three years ago. I started a bubblegum punk band called “the tenth” about a year and a half ago with my best pal Harley Quinn Smith. Now we have two more members of the band – Eden Hain and Kelly Cruz. We put out our first album out February 10th, 2018, and recently played at LA’s iconic venue The Troubadour. Visual art is an incredibly important part of my life still. I sketch every day, and sell art on Etsy, and occasionally at the Melrose Trading Post at Fairfax High School.

Has it been a smooth road?
There’s always going to be obstacles on a creative path, but I think your mindset is everything. I have faced a LOT of rejection – something all actors deal with. You have to just accept it’s part of the process and not take things personally. I think I’ve been pretty good about that. My mom taught me from an early age that everything happens for a reason, and that’s been a guiding principal in my life. I’ve dealt with bullies, and have had teachers that were unsupportive of my acting dreams. But at the end of the day, the struggles make you stronger. A lot of them I can laugh about today!

A struggle my band has faced is being very quickly labeled as a “girl band.” For one, that’s simply not the case. Our guitarist Eden Hain is non-binary, and the whole band thinks gender is pretty b.s. It’s such a double standard because most bands made up of men are not considered “boy bands”, but the minute women get together to make music they are “a girl band.” A lot of people in the biz we’ve dealt with have not seen us for who we really are. I’m grateful to our manager Tobe Bean for embracing us as musicians, not as people of a certain gender.

Please tell us more about your story. What do you do? What do you specialize in? What sets you apart from competition?
I’m an actor. I’ve released music with my band the tenth – an EP called “Boys We Don’t Know”, and an album called “Dunes.” I sing, write songs, and play guitar for my band. I’m a visual artist, and design original pop art prints/postcards. I illustrated a children’s book called “Fred Needs A Hat” a few years back, and hope to do more illustrated books soon. I have a lot to say, and I’m pretty true to my voice/self. My songs often feel like, at least to me, diary entries. They are incredibly personal and vulnerable. I’m proud of that.

How do you think the industry will change over the next decade?
The TV/Film industry will be shifting a lot over the next 5-10 years. Streaming services are all fighting for their place, and now the networks have to step it up a notch. I’m curious to see how VR will effect the industry. I think indie storytelling will continue to grow.

As far as music, I’m not sure how the industry will change. I hope more femmes will join the field. It’s a pretty male dominated industry, especially as far as labels go. We desperately need some feminine energy and also non-binary people making music.