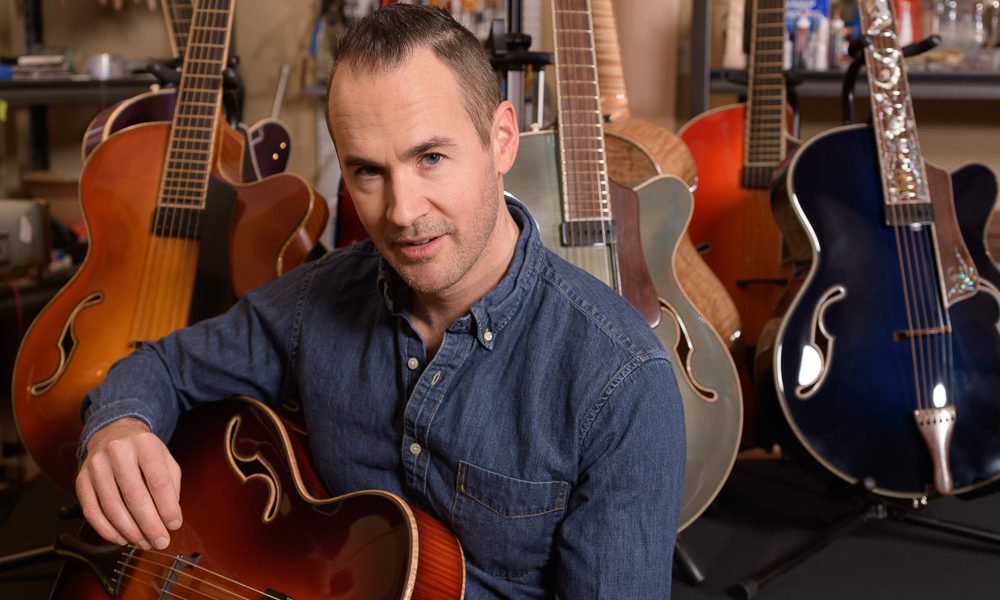 Today we’d like to introduce you to Tad R Brown.

Tad, let’s start with your story. We’d love to hear how you got started and how the journey has been so far.
It all started when I found an old guitar in the trash, or maybe even earlier than that, being born in New Orleans, raised in southern California. By age seven I had built my first ‘guitar’ out of plywood and two by fours.

Some of my earliest memories are of pounding nails with a hammer in the garage with my dad at 2 1/2. He had a lot of tools, and so did his father. Building things has been in my family for generations, since colonial America.

The ball-peen hammer I use today to stamp my maker’s mark was my grandfather’s. So I’ve pretty much always been into making stuff, and tools.

Wood-shop and art classes were always my best subjects in middle and high school. I played electric guitar in garage bands with classmates, and in an acoustic duo, which later expanded into a band.

Around that time at Orange Coast College, I discovered a class called ‘guitar-making’. This was 1996; the class being a holdover from the 1970s.

I caught the last two semesters before the instructor, James Long, retired. But on that very first day, I immediately fell in love with the art of lutherie. Not to be confused with Lutheran. (Stringed instrument making)

I was also taking bronze casting and woodshop, and working on my guitars in woodshop class, and then after school in my parent’s garage. By the end of the first term I was the only kid in the class that had actually built a whole guitar from start to finish in one semester.

It was rough, but sounded surprisingly good! That really spurred me on to make more.

After finishing 3 or 4 acoustic guitars, I started showing them around town to the local music shops, and found a part-time job doing repair work. Shortly thereafter I got a phone call from another shop to fill in for a tech who was out on tour.

That temporary gig turned into a full-time position at The Guitar Doctor, and over the years I became really good at set-up work; tune-ups for guitars. Straighten the neck, set the string action height, intonation, fret level & polish, make it play real sweet.

This shop was super busy at that time, with piles of guitars and amps everywhere. The owner, Doc Pittillo, was a real character.

Soon I became the main tech and had the key to the shop to open in the mornings, and for late-night jam sessions with the guys. Those were some great times.

I worked on over a thousand guitars a year; everything from old gear in dire need of adjustment, to many many fine instruments of all types. That really honed my skills in developing a critical eye for detail, best practices, and things to avoid.

At one point I was working for two different repair shops at the same time after getting another phone call, this time from Kirk Sand, a renowned builder of finger-style guitars, who gave me a lot of tips and encouragement.

After about ten years of working in the back rooms of dusty repair shops, I was ready to head out on my own, and now focus exclusively on building just archtop guitars from my workshop studio, displaying at 3-4 boutique guitar shows a year around the country.

I am very grateful to all the people who have helped me over the years, and for the amount of information sharing among fellow luthiers and repairmen, and of course the wonderful support of clients, players, and promoters who make it all possible.

We’re always bombarded by how great it is to pursue your passion, etc – but we’ve spoken with enough people to know that it’s not always easy. Overall, would you say things have been easy for you?
The market for guitars is an extremely oversaturated one. There are millions of guitars produced annually, especially at the mid-range and lower end, with overseas factories and big brand names dominating.

There is however a small but dedicated community of master craftsmen and women who custom make handcrafted instruments of exceptional quality, and many players, collectors, and aficionados who appreciate them.

The road to developing the skills to build such an instrument is a very steep learning curve. The difference between handmade and homemade is vast.

There are a million little details to master, starting from the raw wood, to construction techniques, all the way through the finishing process, with just as many opportunities for things to go wrong at every stage.

It is very physical manual work carving an arch-top and back out of inch thick wood. The fine details are very exacting and demanding.

Guitars are really serious business to players and collectors, in the same sense as cars and football to auto enthusiasts and sports fanatics. At the top end, there’s no room for ‘pretty good’, or ‘good enough’; it’s either win or lose, pass or fail.

For example, the time I was buffing and polishing the final finish on a new guitar only to come up with a major blemish in the top. Rather than mess with trying to touch it up, I opted to strip the whole thing back down to bare wood and start over.

In the end, the new color turned out even better than the original and was well worth the extra effort to perfect what would have been unsellable.

We’d love to hear more about your business.
Specializing in hand made acoustic archtop guitars. Archtop guitars share many of the same overtones with the familiar flat-top round hole acoustic guitar, and the sides are also bent to shape.

Different in that the top and back are arched, carved from solid wood like a violin, with f-holes. And the strings are attached by a tail-piece rather than at the bridge.

Primarily used for jazz, but not exclusively; the archtop guitar is actually the most versatile of all guitars.

Originally designed as a purely acoustic instrument in the late 19th century, there are Gibson L5 archtops from the 1920s that are still the most highly sought after today.

Once the great depression hit and electric pickups came along in the 1930s, only a handful of independent luthiers like D’Angelico continued making these finely carved acoustic instruments.

Body sizes and weight increased substantially through the 40’s, 50s, 60s, to the point where most people’s idea of a ‘traditional archtop’ today resembles more of a big heavily built electric guitar with hollow air inside. They don’t really sound like much acoustically but do a certain thing amplified.

My guitars have electric pickups too, but are also very finely carved and tuned for their acoustic response, more like those early golden era archtops, weighing under 5lbs.

Acoustic guitar players accustomed to playing flat-top guitars are often amazed by how much tone an acoustic archtop can have. The sound is more nuanced and complex, and there is this certain aesthetic appeal with all the beautiful curves and elegant styling.

In that regard, the archtop guitar can be considered the king of guitars.

Tad R. Brown is an American craftsman who has been working with music, art, wood, and guitars for over 30 years.

Personally handcrafting all aspects of each guitar from all premium-grade solid tone-woods, Brown guitars are specially designed to crossover between jazz and acoustic instruments, with exceptional attention to detail, tone, quality, and playability.

What were you like growing up?
As a kid I was absorbed in all kinds of hobbies like boomerangs, model rockets, photography, archery, zip lining, go-carts, dirt bikes, potato canons…

Some of those underwater adventures, and living on Coast Highway in Laguna Beach were the inspiration behind the inlay designs on my guitars. Mermaids, sharks, sunken treasure… cut from abalone, mother of pearl, and reconstituted stone. 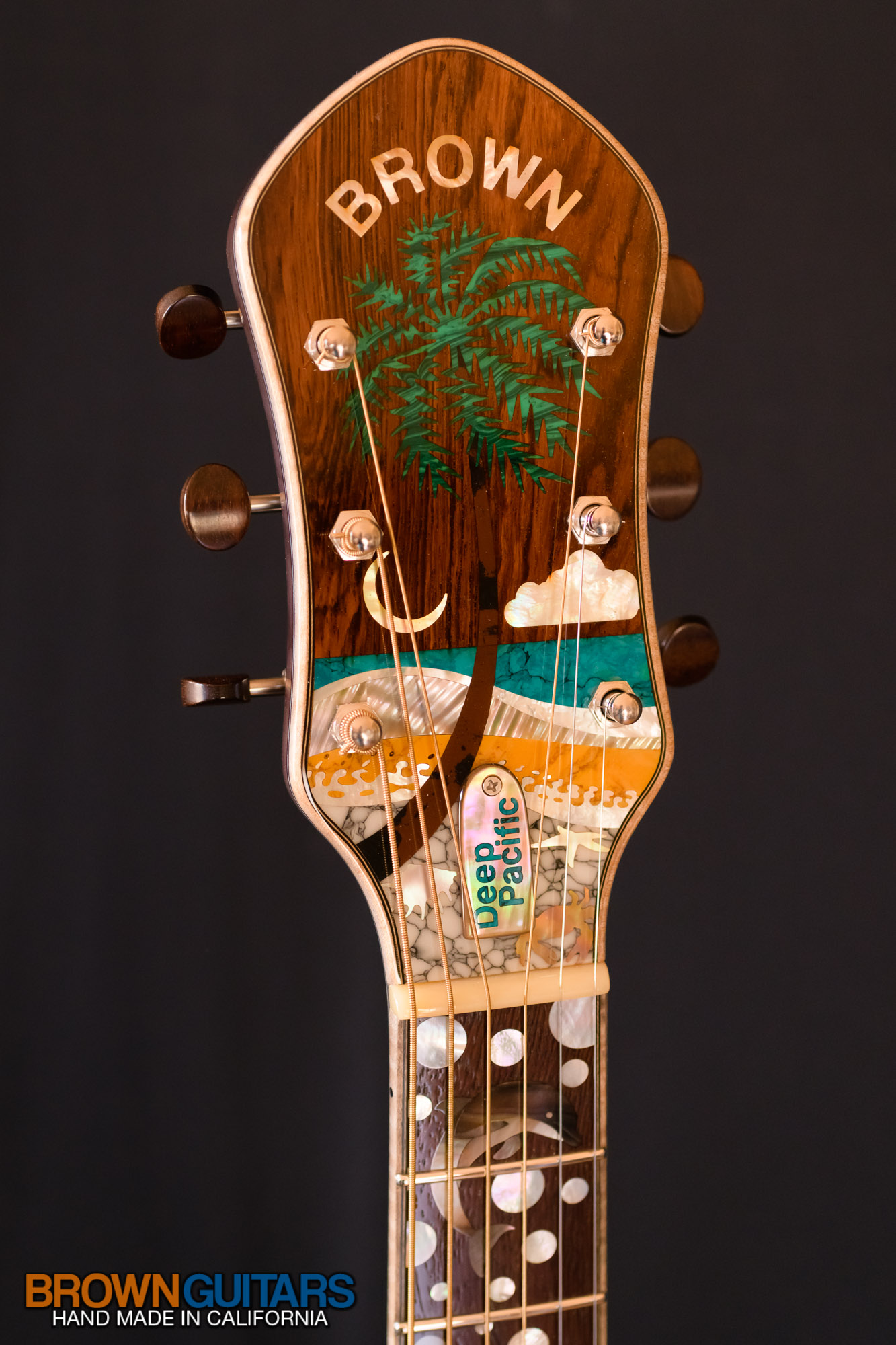 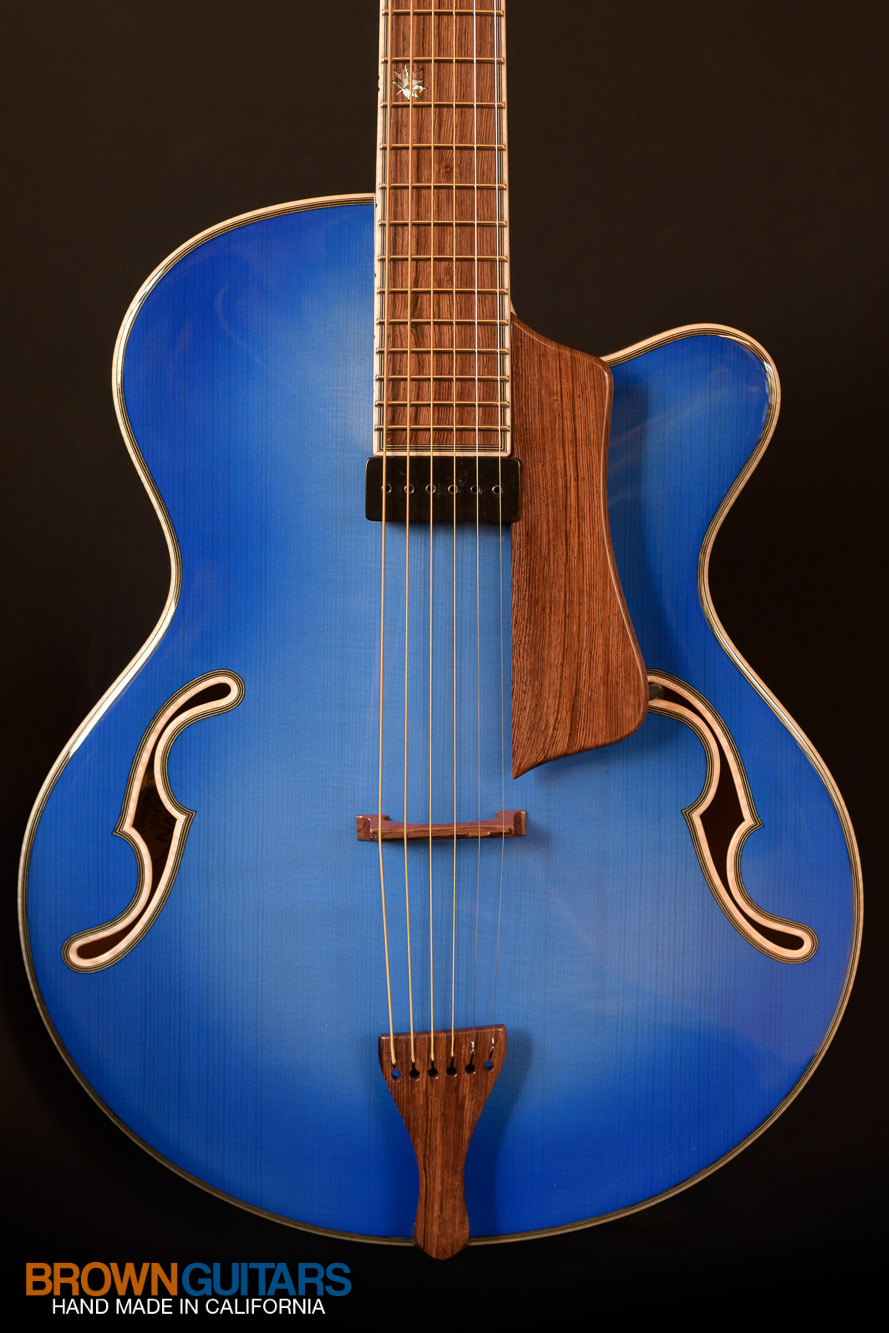 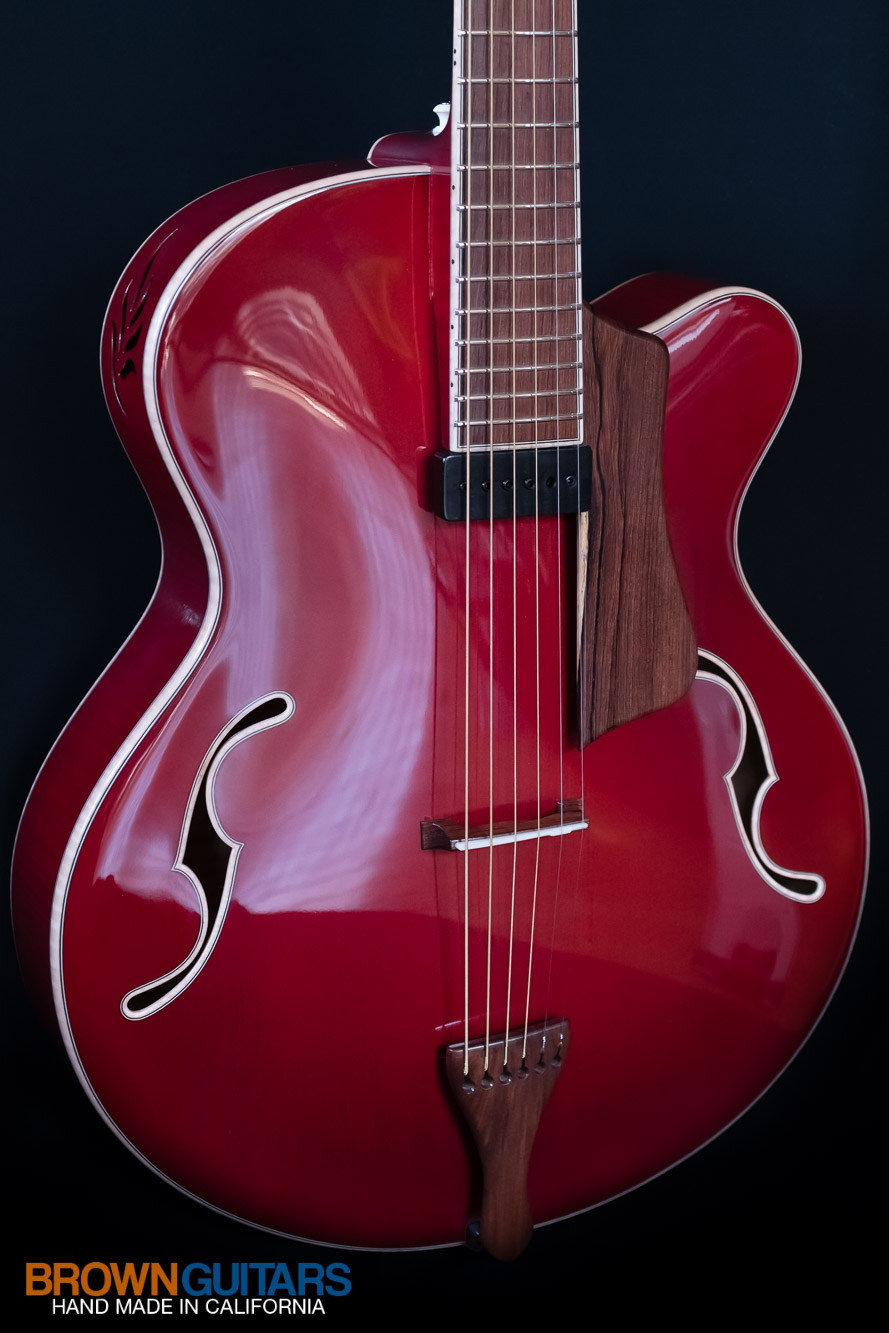 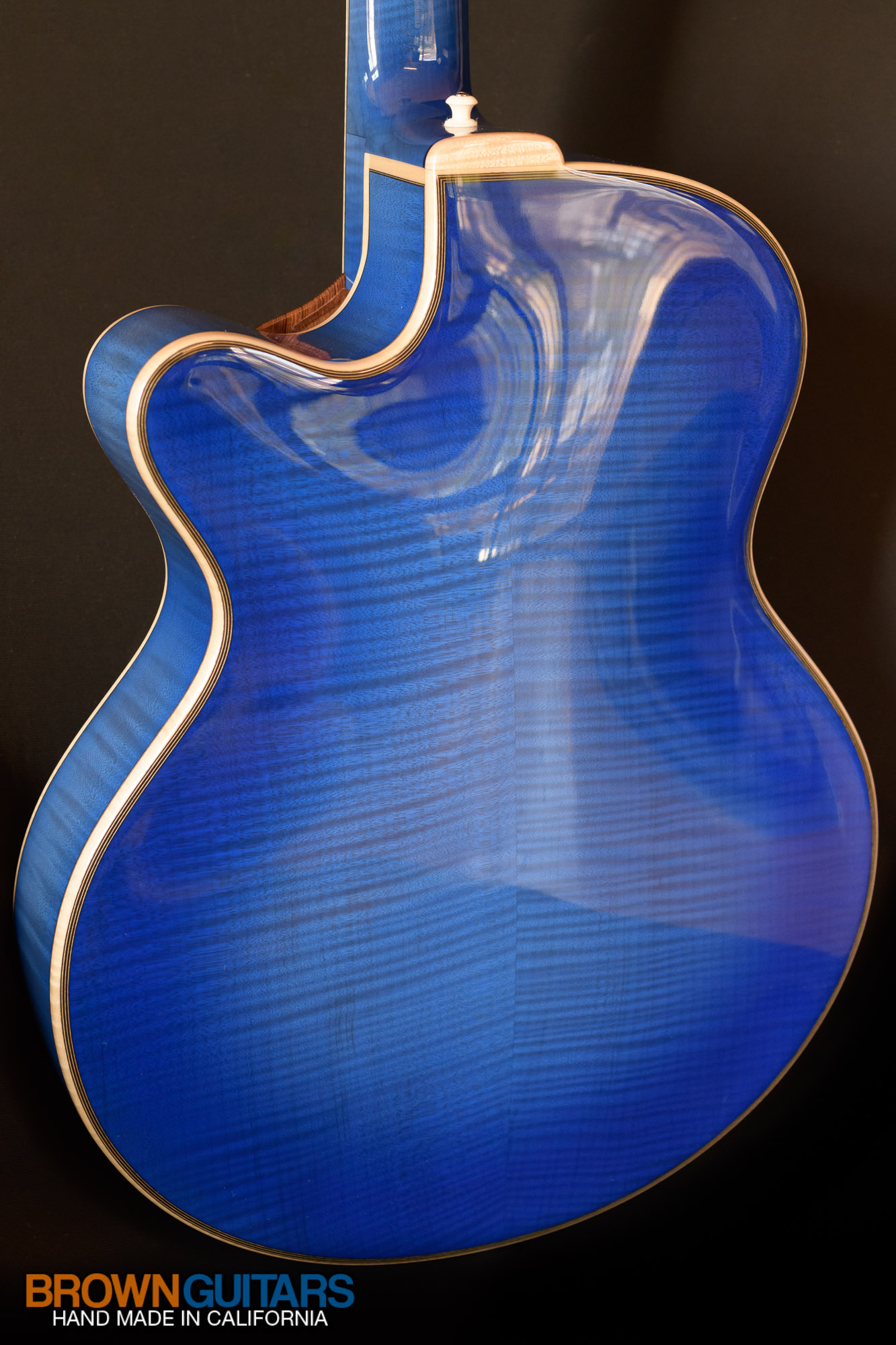 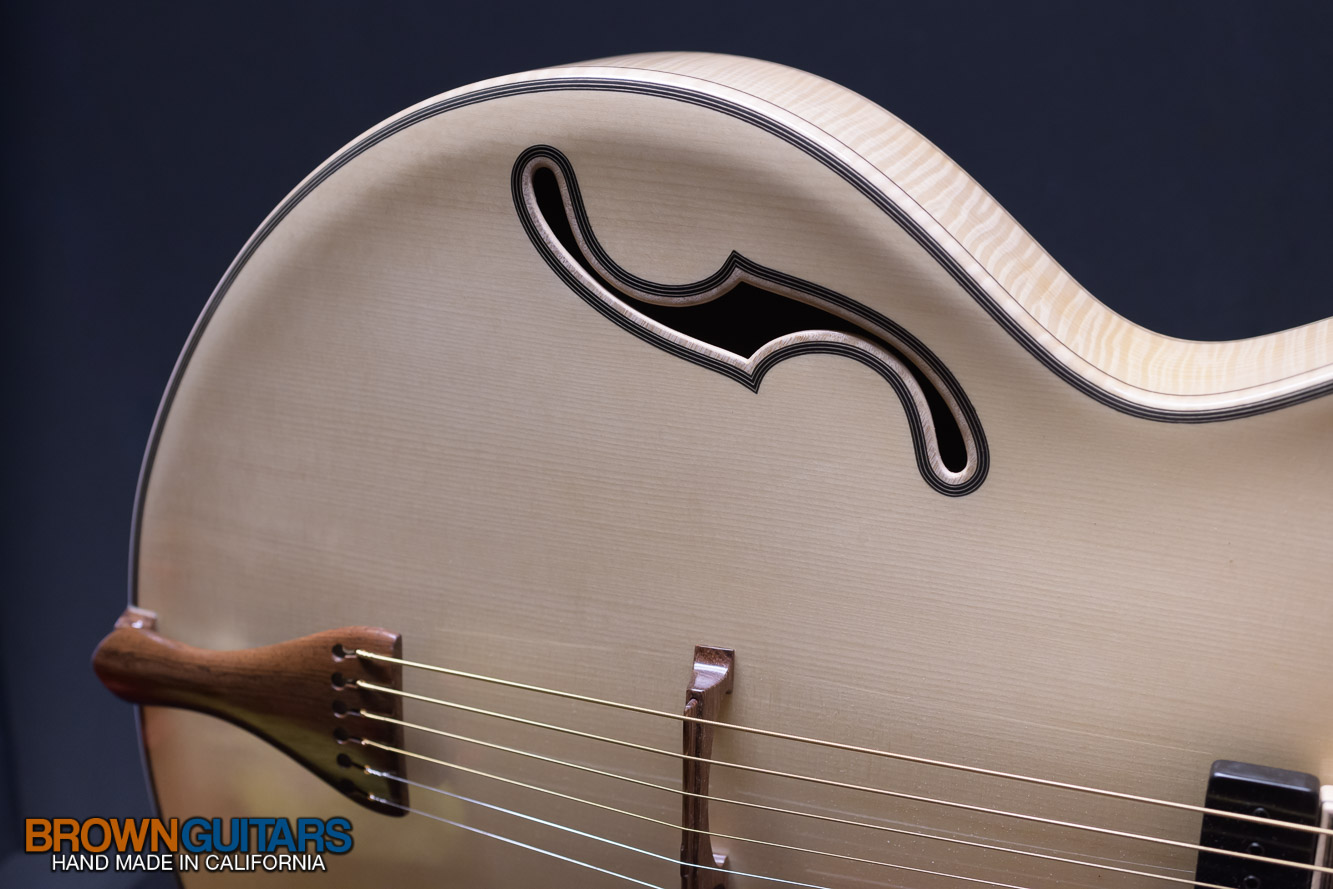 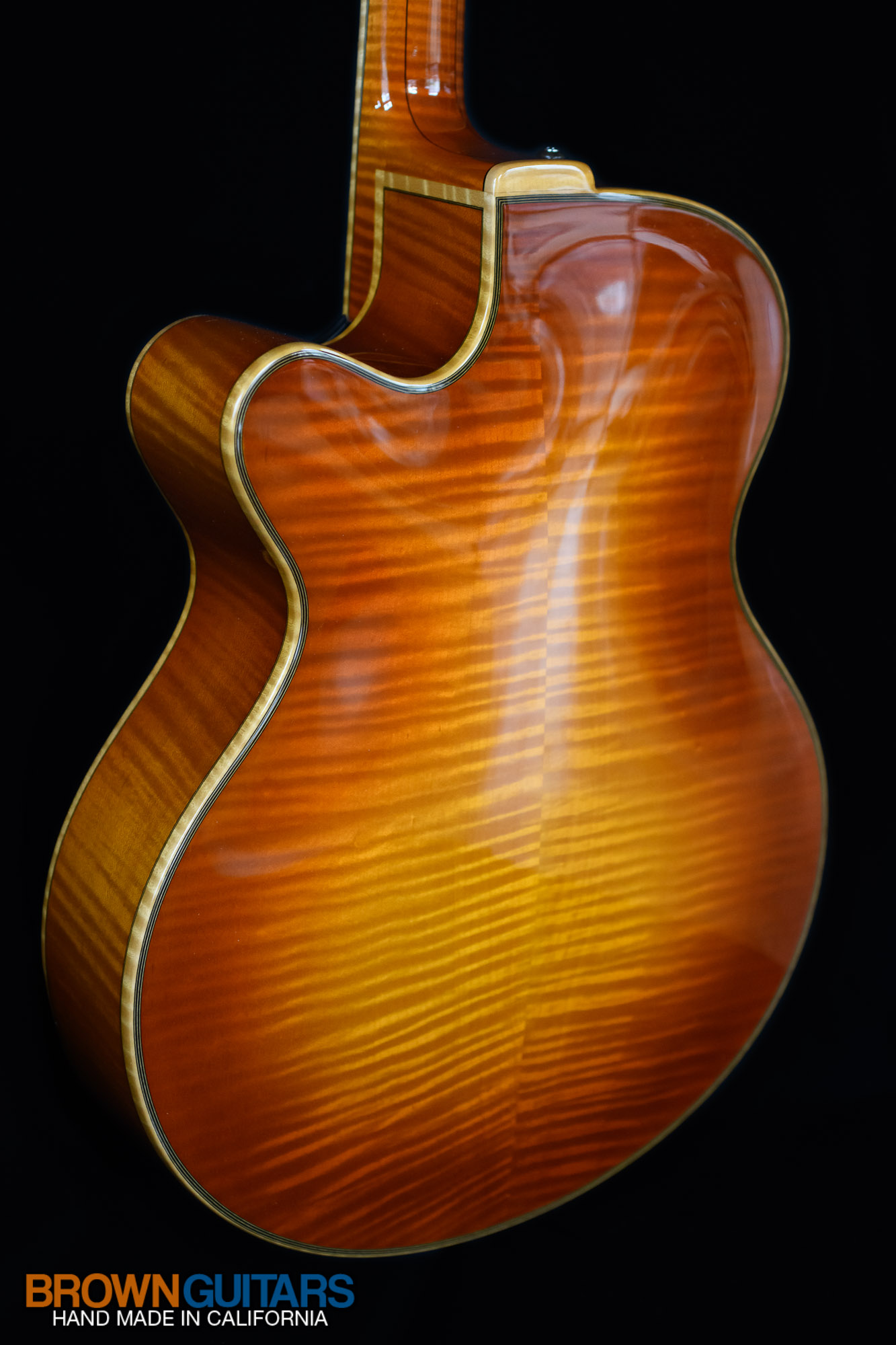 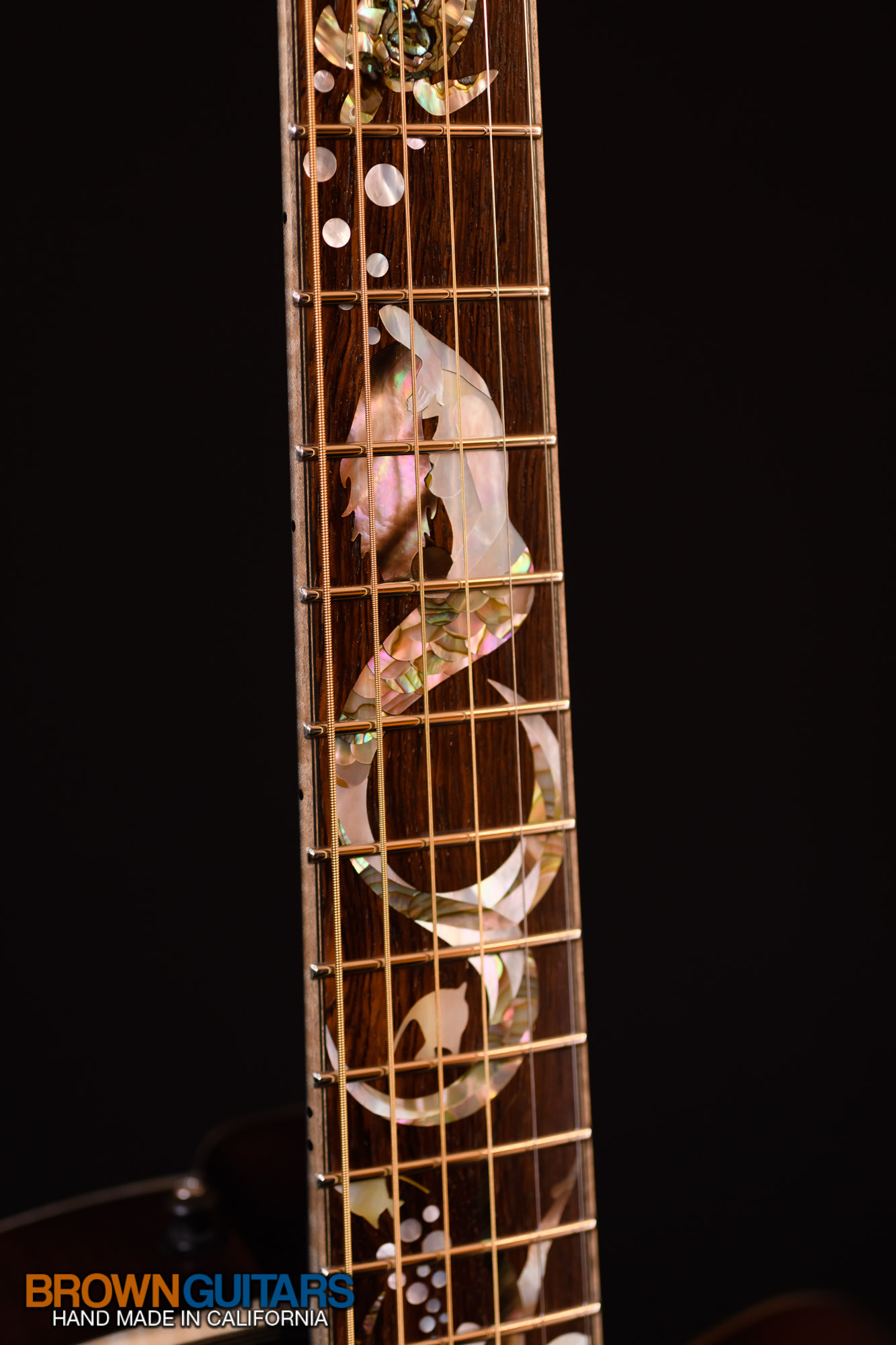 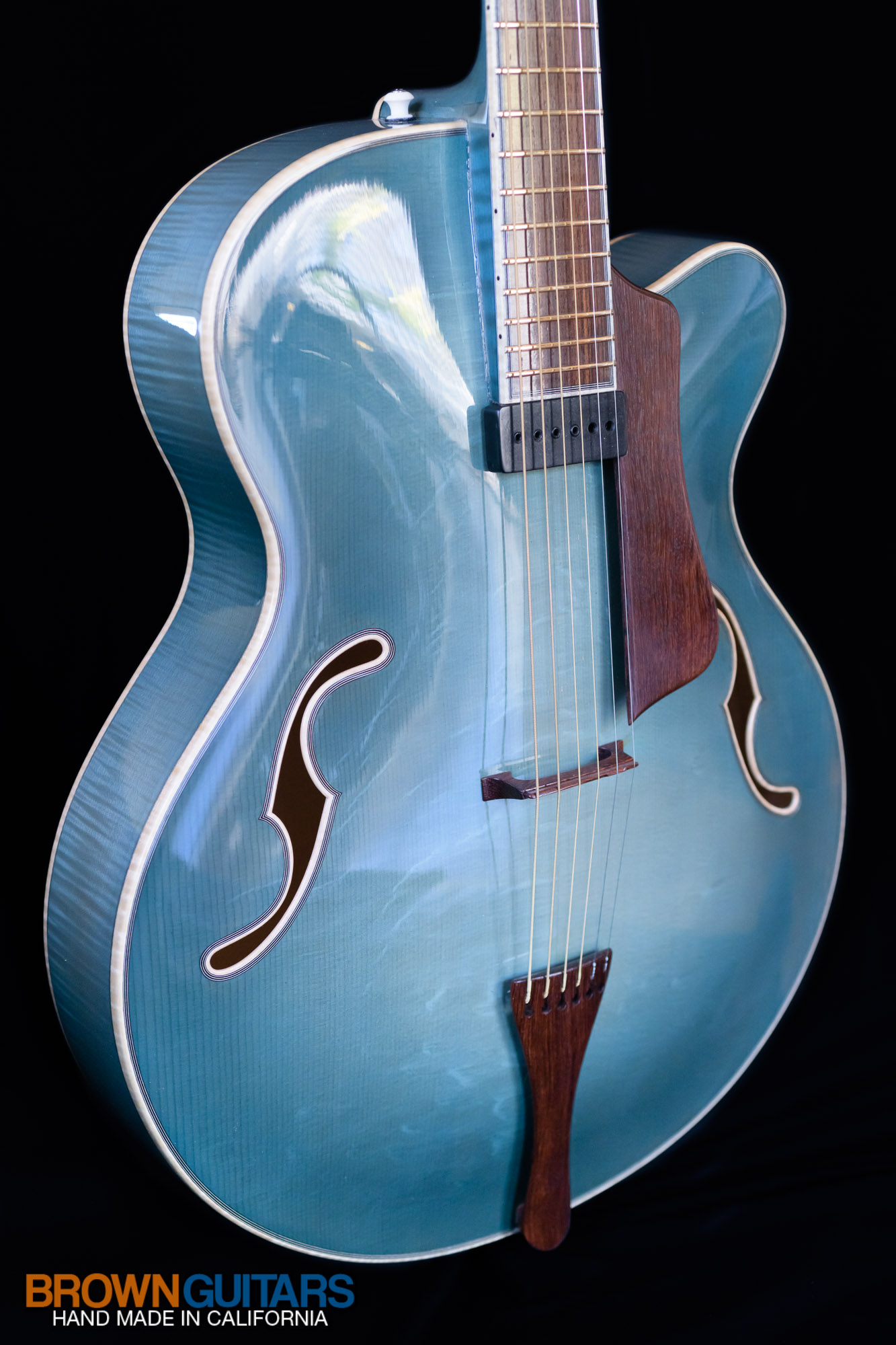