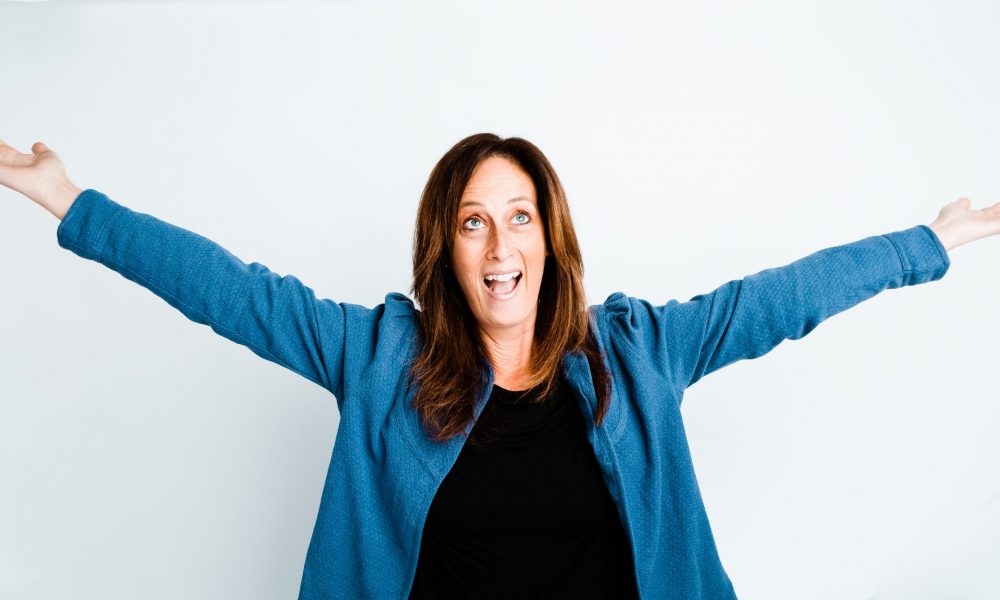 Today we’d like to introduce you to Susanna Spies.

Thanks for sharing your story with us Susanna. So, let’s start at the beginning, and we can move on from there.
As a kid, I had a fairly strict household. No tv, no gum, no makeup- things most kids like to have. I’d often escape to my room to create my own entertainment, my own imaginary tv- characters created in my own mind and my immediate surroundings.

My fork, spoon, shoe – would become characters: Pedro the salt from Puerto Rico, Sandra the tired shoe from NY, and soon I’d fall into a new dimension. I think that’s my first memory of my bug for creating characters, acting, and love of laughter while performing for my friends. It felt a new way for me to escape from some of the “no”’s, and since then has stayed with me, and wanted to reach others to feel the same way.

Like most people, I came to LA to pursue acting. And like most people, have had many jobs to keep afloat. One of my jobs when I first got to LA was teaching English and Drama back in 2002. It was an exciting change from temping, delivering juice, and all the other fill n the gap jobs. Being that I came from parents both as educators, it was an important part of my upbringing, and something I was always interested in. I got a job teaching 8th grade English and noticed the rapid response whenever I’d make them laugh. I’d engage them within the lessons to tap into their own ways to make one another laugh, and witnessed firsthand their enthusiasm learning within a different context.

I started developing a curriculum, and would implement some of the activities into my classroom and Comedy Playground was born. My friend Tim built a “Murphy stage” a wooden plank we’d put up behind curtains in my living room wall, and down for a few weekend demo workshops, that started back around 2002. From there the program grew, and we have been going since. Youth classes are held in Hollywood at New Collective LA theater/studio space, with showcases culminating at The Improv in Hollywood. Programs are additionally offered on site, for adults, senior citizens, and companies.

As an actor, performer and comedienne, I’ve understood firsthand the importance of creative expression. And was particularly drawn towards giving youth the opportunity to express during years so pivotal. My own teen years weren’t the easiest (who’s were?), and I felt drawn to create a platform within the art forms I loved, to create a pathway for others to love. I feel honored to help provide a platform for folks to express, have a voice, gain confidence, build friendships, and be heard. It sucks not to feel heard,  and Comedy Playground was something I hoped could “turn it up”. A place where youth (ages 10-19) could find their voice, and learn how to share their experiences through a platform we all know and understand: laughter.

I feel very lucky also to have an amazing team of instructors working within. Katey Mushlin, Improvisational Director and Lead Improv instructor of Comedy Playground, as well as instructor Jerami Monreal and others through the years as our “Intern-omedy Experts” -CP grads turned interns some include: William Banner, Joe Jaffa, Hana Michels, and many that have been a part, as well as the professional comics as guests who have also been a part. Every day I feel incredibly grateful. In a world that seems particularly chaotic and tenuous, we all could use more laughter. I always say comedy and laughter are universal languages known by all. So as our motto goes: “Why sit… when you can stand up!”

I love teaching, creating, and trying to make a difference while pursuing my own craft as a comedienne, writer, and actor.

Has it been a smooth road?
I think for me, the struggle has been balancing all. My own creative endeavors, and as a small business owner and Executive Artistic Director of a non-profit, the road at times can feel more hilly than flat – or rocky than smooth- but just try to focus on awesome horizons along the way. (Cheesy answer, but truth)!

My biggest struggle is wearing various hats, but I think that also is what inspires me, to try and reach all, as best I can. And in this climate today, laughter is essential to all walks of life, so I’ll take it, however, can get it, generate it, teach it, perform it, and live by it!

I am excited by a book I have been writing around this, and am reminded that struggles are the gems that keep the pages turned, and to “keep on keepin’ on.”

So let’s switch gears a bit and go into the Comedy Playground story. Tell us more about the business.
I’m a comedienne, writer, performer, and a Humor Advocate. (HA!) I have a company called Comedy Playground, providing programs for youth, adults, seniors stand up and improvisation. We provide programs both on site and are headquartered in Los Angeles.

Comedy Playground youth programs have culminated into live showcases performed out of The Improv in Hollywood since 2004. Comedy Playground also has developed a corporate division called “The Humor Activist (HA!) providing on-site “Humor Connectivity” programs into companies and have worked with dozens nationwide within team building, overcoming obstacles with public speaking, how to gain confidence and tools for success. Further info on Corporate programs, go to http://www.thehumoractivist.com.

Senior Stand Up “SSU” is Comedy Playground’s 55+ program provided on-site into assisted living and retirement communities. As we know, laughter is ageless, has no expiration date, and everyone deserves the opportunity to overcome through humor.

Seeing someone share stories and develop a routine from many years of life, is captivating, and as I always say, “I don’t teach how to be funny, as much as an outlet to express who you are, through comedy.” Each program and demographic means mountains to me. I also am involved in a program that I hold a special place for as co-founder and Executive Artistic Director of, called The Eamon Cannon Comedy Project (ECCP). Reaching youth in less fortunate circumstances, has always been something very important to me. Prior to ECCP, I was ED of a non- profit teaching stand up to inner-city youth called Laughlinks which has since emerged into ECCP to continue that mission, and honor it’s namesake.

ECCP is a non-profit organization sponsored by Social Good, in dedication to it’s namesake Eamon Cannon, a comedy prodigy who began stand up as a teen and became a mentor to other students in Comedy Playground. He continued performing, making great strides as a young professional comic, and tragically passed away in 2007, at the age of 20. Together with his family, we wanted to start a program in his name to help other teens in share their voices doing what he loved; stand up for those in less fortunate circumstances from the inner-city and underprivileged areas. ECCP focuses on providing programs for inner-city youth into schools, and organizations to enhance skills in critical thinking, expository writing, and public speaking, through stand up and improvisation.

We strive to “help kids find their funny,” and since 2008 have provided programs into schools, centers, and arts organizations such as Inner-City Arts, which this month celebrates its 11th year. Further info on ECCP can be found by visiting: http://www.eamoncannoncomedyproject.org.

Where do you see your industry going over the next 5-10 years?  Any big shifts, changes, trends, etc?
As a comic, I’ve seen rapid changes already. More people doing stand up, voices wanting to be heard, the need to share, and importance to do so. I am lucky because I have created a business from the art form I also love and do. So much of what I experience as a comic, I am able to draw on within my own teachings, as relatable.

In the next 5-10 years I see big shifts in awareness, and being further informed through comedy. That the need to express through this outlet is even more vital now, due to the climate we are living in, and that perspectives can be opened, and more poignant to express, with impacts beyond the mic. I think that stand up is becoming a through-line of humanity. Laughter is something every human being knows.

Comedy is the vessel, but as a comic or not – everyone has experiences they can learn to draw on as tools toward living more enriching lives, connecting, and shifting perspective through humor. I look forward to seeing how humor continues to shape change and awareness, and will continue being an advocate, and performing. It’s all a big part of me. 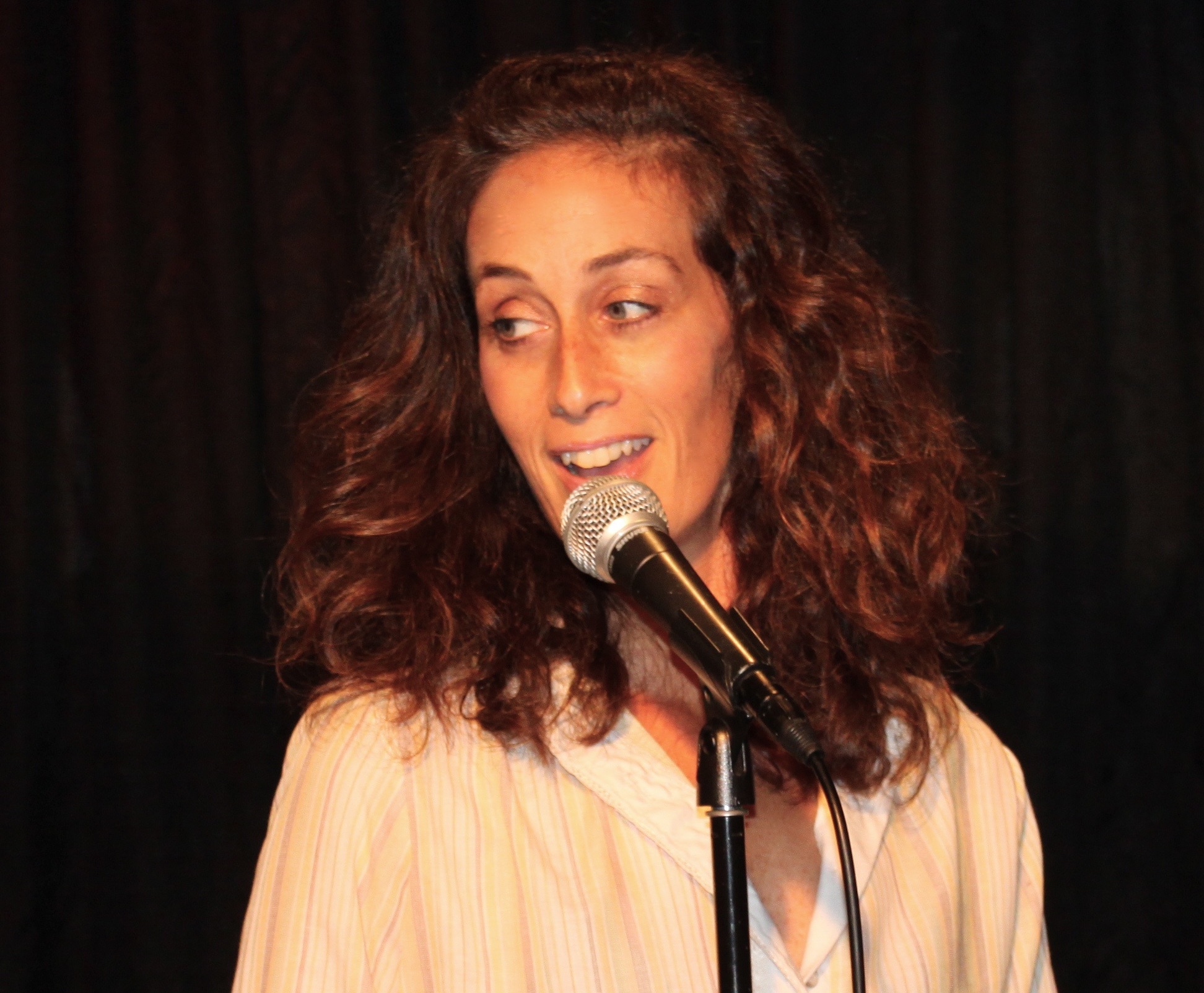 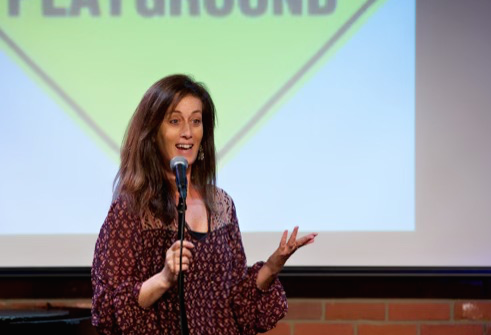 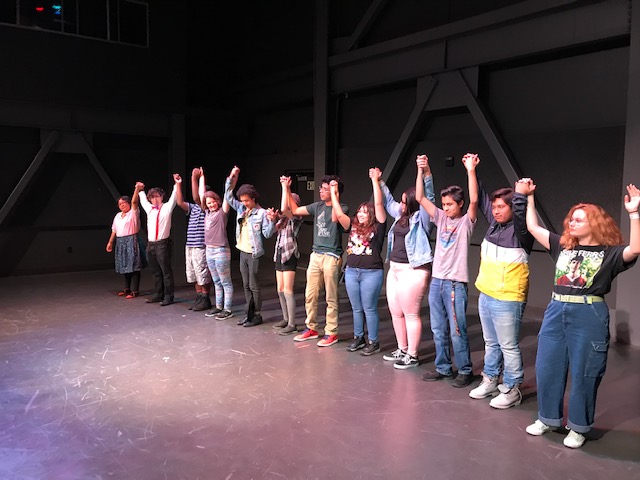 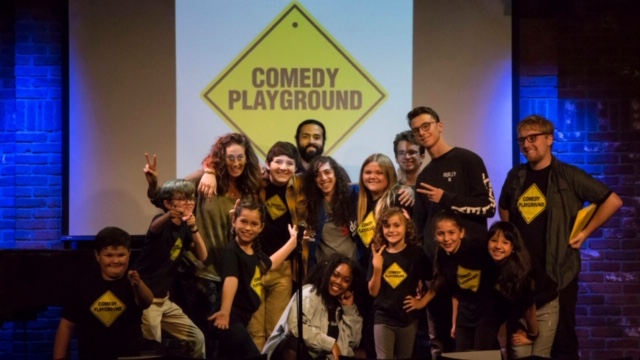 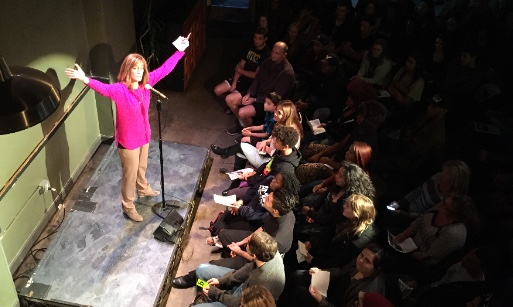 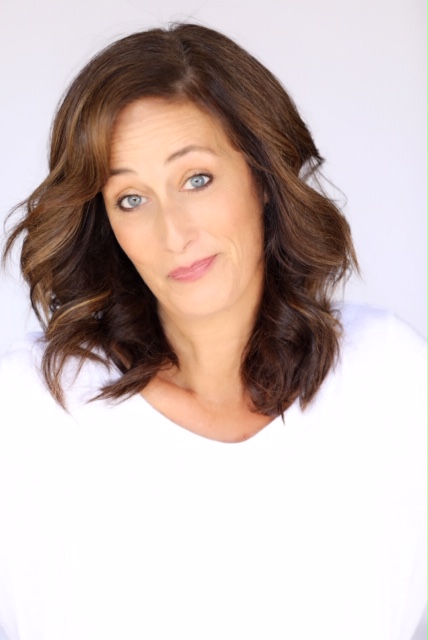 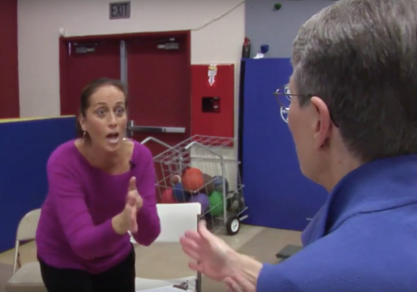 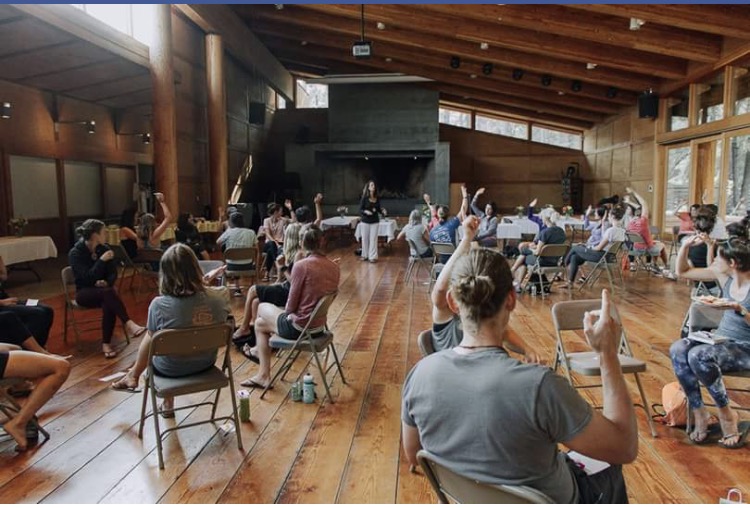 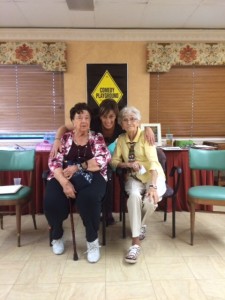 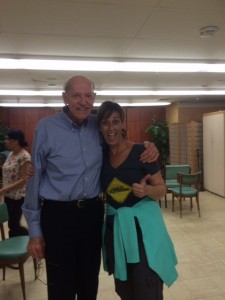 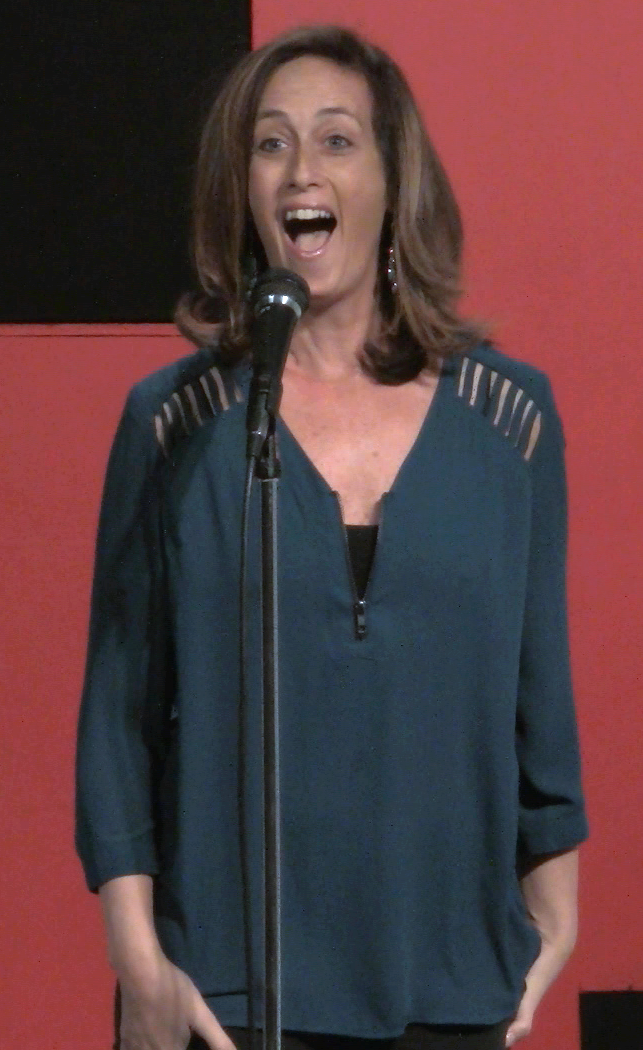