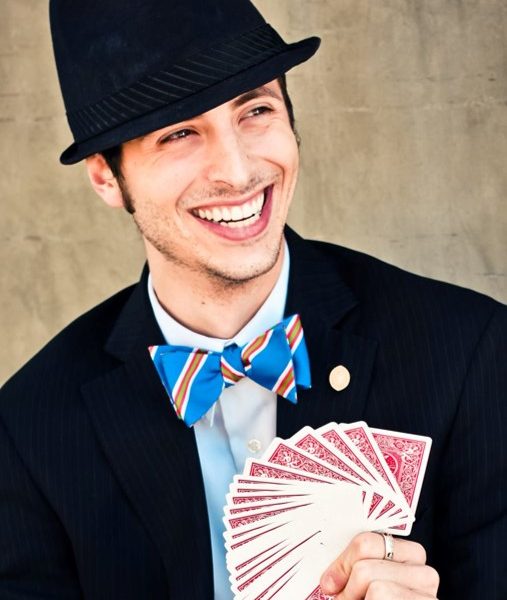 Today we’d like to introduce you to Steven Himmel.

Steven, please share your story with us. How did you get to where you are today?
I was 19 years old when I first got into magic. I started working at a place called Chuck’s House of Magic. It was a party/magic/costume shop in a town called Homewood, Illinois. It’s a south suburb of Chicago. As a young kid, I always liked watching magic but never thought that I would ever become a magician. It all happened by accident.

I would watch Chuck make coins vanish for customers all of the time and never had any idea how he was doing it. As a non-magician employee, I wasn’t allowed in the magic department or allowed to sell magic. So, of course, that made it more mysterious for me. Then one day I saw one of my co-workers performing a card trick for someone and all of a sudden the entire deck changed into the same card! It blew my mind! That was the moment. I suppose the reason I got into magic was out of frustration and complete amazement at the ability to do the impossible. It was like a super power. None of the magicians would tell me how anything worked. So I bought this cheap little trick where 6 gems change color.

One evening I was out to dinner and performed the color changing gems trick for this family and they went nuts! They asked to see more but I only had the one trick. I knew at that point that I had to get some more tricks in my arsenal of magic. It just snowballed from there.

I moved to downtown Chicago in December of that year and continued to learn all I could about magic and sleight of hand. I bought every book on magic that Barnes and Noble carried. I would read those books cover to cover and over and over again. I would practice by walking up and down the streets of Chicago performing card tricks for as many people as I could. This was the best kind of practice.

I then started performing at kids birthday parties, graduations, weddings, holiday parties, really every kind of event. After about 6 months in the city, I decided to go to college in Champaign, Illinois. I met a number of magicians down there and discovered an amazing magic shop called Dallas and Co. They had so much magic! It was very overwhelming for me. I met a guy named Greg who is the same age as me and we became fast friends. He made my magic exponentially better in the short time I was in Champaign. I owe him a lot.

After a year and a half, I graduated and moved back to the south suburbs where I started working at Chuck’s House of Magic again. This time as their magician and magic sales person. I spent the next 2 years selling magic and learning all the new stuff to hit the market. Then the opportunity arose for me to move to LA. 2 months later I packed up my car and drove out here. Best decision of my life.

I have been living in LA for 5 years now. I’m a magician member of the Academy of Magical Arts located at the world famous Magic Castle in Hollywood, I am a multiple award-winning close-up magician, I’m a regular performer at the Magic Castle. And I am the resident magician every Sunday from 5-7pm at Cecconi’s restaurant in West Hollywood.

My magic has allowed me to travel the world and meet some of the most amazing people on the planet. I’m so lucky that magic found me. It saved my life.

We’re always bombarded by how great it is to pursue your passion, etc – but we’ve spoken with enough people to know that it’s not always easy. Overall, would you say things have been easy for you?
Its never been a smooth road. There have been challenges the entire way. I would go months without shows. It was hard for me to figure out how to market myself. How do I get my name out there, how do I get people to pay me my worth as a performer? The real struggle was finding out who I was as a performer. What sets me apart from other magicians? I feel that sometimes I still struggle with that.

So let’s switch gears a bit and go into the Steven Himmel Magic story. Tell us more about the business.
My business is all about bringing unique magical entertainment to any and all events. I specialize in close-up magic. This is the most intimate kind of magic. It happens right under the noses of spectators. I feel that it is the most technically demanding of all the facets of magic.
I also perform stand-up comedy magic/mind-reading. This kind of performance plays for much larger audiences and is perfect for corporate events to college shows.

The thing I’m most proud of regarding my business is that I’m able to bring happiness and wonderment to people. I’m proud to be part of a small, yet rather large community of such creative and talented people.
I think what sets me apart from other performers is my ability to connect with my audience. I leave my shows with new friends, not new clients.

Has luck played a meaningful role in your life and business?
I believe there is a certain amount of luck in everything. I got fired from a job that led me to LA. Bad or good luck? You tell me. But it’s also important to recognize that moment of luck and work hard to keep the positive rolling in. I was lucky to make it to LA, but I’ve had to work hard since I got here to keep my magic going.