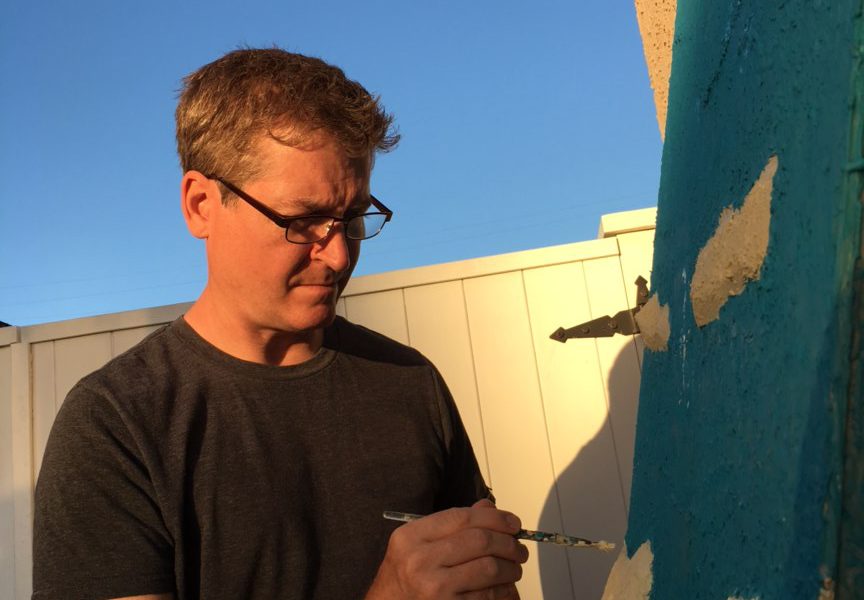 Today we’d like to introduce you to Spencer Stander.

Thanks for sharing your story with us Spencer. So, let’s start at the beginning and we can move on from there.
I moved to LA from Ohio 25 years ago, just after college and not knowing a single person here. I landed a minimum wage gig at Guitar Center and quickly learned to talk to people about what I wanted, backing it up with dedication and smart work. Some would call me a workaholic.

Since then, I’ve done it all: I’ve run camera for E! News Daily, mixed live shows at Sony, mixed and recorded albums, music supervised at E!, done voice-over direction at Warner Bros., spent a decade editing at Warner and Sony, and edited and produced countless video game and film trailers. Then in 2008, I was fortunate enough to produce great feature films with Billy Bob Thornton, Hillary Duff, Winona Ryder, Sean Astin, Chevy Chase, and Jon Cryer. I followed it up by signing a four-year Executive Producing deal with ITV Studios. I launched my own shows for networks under my company, Stander Productions, Inc. producing hundreds of hours of television shows for networks like AXS, GSN, and HGTV. The last 2 years I’ve spent too much money and time pursuing another passion by completing two22 minute animated pilots, “The Kreaps” TVG and “Stuck in Malibu”MA. I hope some network will pick them up.

I’m always looking for great clients and brands to work with! Please get in touch.

The last 6 months I’ve also become a sculptural fine artist, specializing in original game design and fabrication, with use of my own unique ‘faux-Impasto’ techniques. My work effectively bridges the gap between function and fine art, creating special niche in the art world.

I found my voice in game design when working with Steve Lyons, a leading contemporary artist in the U.S., on creating a textural base for a video installation exhibition. Steve saw my work in LA as something truly unique in the fine art world. Each sculpture, each painting has components of a board game – board, pieces, rules, a narrative, an objective, etc. – yet my pieces are collector’s items with my own aesthetic implemented onto every part.

The functional side to my work takes place at weekly game night at my favorite microbrewery, Macleod Ale, bringing together art and game enthusiasts to test and experience my unique perspective through narrative, visuals and frankly, entertainment.

I will be having a solo exhibition at Los Angeles’s Contemporary Gallery downtown August 25th through October 25th, 2018.

Overall, has it been relatively smooth? If not, what were some of the struggles along the way?
1) Not knowing anyone in LA when I first moved out. I ate Mayo and white bread sandwiches for a while and didn’t own my own refrigerator.

2) I lived with 7 dudes in a 1 bedroom townhouse. Super cheap rent.

3) To be honest these last 2 years have been challenging. I’m an award-winning editor but I can’t get hired as an editor because everyone sees me as a producer. And I haven’t produced enough to have networks, production cos and agents pursuing me so my only option seems to be selling my own shows and films right now. Does anyone want a great animated show, reality concept or a hit 70’s gangster movie based on a real-life story?

4) Launching a new art career in my 40’s, thankfully my wife and daughter are very supportive.

Stander Productions and Artist Spencer Stander – what should we know? What do you guys do best? What sets you apart from the competition?
Stander Productions Inc., originally formed in 1996 as a music composing company quickly turned into a paper to product, concept to completion shop for a multitude of media formats. Spencer is an Executive Producer on the Billy Bob Thornton feature film “SMELL OF SUCCESS” and Hillary Duff, Winona Ryder, Chevy Chase, and Jon Cryers’ movie “STAY COOL.” Stander Productions Inc. is responsible for editorial, special visual effects, CG, graphics, mix, budgets, clearance, and handling talent. In television, ITV Studios America signed Spencer and Stander Productions Inc. to a four year Executive Producer Deal where he developed a multitude of reality shows for many networks. Stander Productions Inc. has proudly produced “Crowded House,” a series airing on HGTV and 11 seasons of a travelogue series for AXS Network. Currently, Spencer is pursuing his true passion and completing two independent animated pilots, “The Kreaps” TV G and “Stuck in Malibu” MA. Spencer began as an audio engineer for several programs at E! Entertainment Television and Sony’s Game Show Network. He taught himself to edit and produce and expanded his production skills even further. Spencer has also had the award-winning success of producing promotional campaigns for such television shows as BUFFY THE VAMPIRE SLAYER, SMALLVILLE, SUPERNATURAL and CHARMED.

What is “success” or “successful” for you?
Stander Productions has so much possibility, making films, TV, marketing, and commercials and it that has allowed me to work at home and to see my wife every day and my daughter grow up while saving for retirement. I think that is pretty cool. I also got to start an eco-charity: http://www.coolgreenfashionforforests.org/.