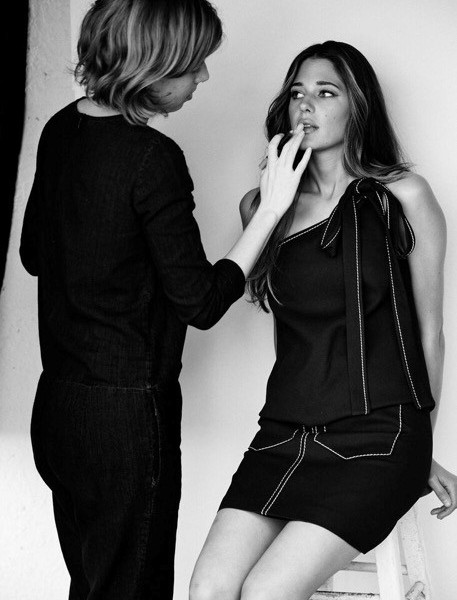 Today we’d like to introduce you to Melissa Murdick.

Born and raised in North Carolina, Melissa brought her talent, skill and hustle to LA – and it’s paid off big time.  Below, you’ll find excerpts from our interview with Melissa.

Tell us about how you got started – did you always know you would be a makeup artist?

My dad worked as a photographer and I think being at work with my dad initially sparked my interest in makeup as a young teen, and I quickly began to practice on any friend that was willing to sit still long enough. This was before the internet age, so I would pick up Allure magazine and follow their “step by step” makeup instructions to learn different looks. I’d tweeze everyone’s eyebrows (poor girls…I was only a naive 13 when I started, so I hope they grew back in!), and thumb through makeup books and magazines for more inspiration. When I was 16, I began to work at a makeup store called Merle Norman, and I have been doing makeup professionally ever since!

Wow – so you started really young.  So what were some of the important milestones along the way since Merle Norman?

After high school, I went to a small makeup school in Los Angeles for a few months in lieu of getting a degree in college, and made a permanent move here 7 years ago. Since then, I built my career through networking and a lot of dedication, initially assisting many of the best makeup artists in my industry both in LA, New York, and abroad for several years. I have done a variety of work for magazines, advertising, and celebrities that you can keep up with via my website and social media.

Very cool, but what about the challenges?

Becoming a makeup artist professionally continues to be a challenging endeavor that requires a lot of persistence, passion, and innovation. I have definitely had the “slow and steady” route to success, filled with its own share of setbacks. Moving to LA with very little money, no car, and only 1 friend here (the rest of my friends and family being back home in North Carolina), put me in the “struggling” category for the first several years I was here, just trying to make ends meet. I worked many jobs I didn’t like–as a restaurant hostess, in retail, and even as a door-to-door Organic fruit salesman, ha!–to get myself going as I slowly built my makeup career. I could tell you a thousand odd and hilarious stories about trying to get by. When I started trying to get my foot in the door with the agencies here that represent hair and makeup artists, that was a major hurdle in and of itself. I faced a lot of rejection before anybody would ever give me a chance. My first ‘job’ was working for free with a makeup artist who needed some extra help one day but had no rate to offer me, and I was able to keep working with her from there on out and gradually get my name out there. That was my first milestone because it was my jumping off point. After making that initial contact, I assisted a lot of other amazing makeup artists over the course of about 5 years, which was both an incredible opportunity, and challenging in and of itself. You deal with a lot of big personalities in this industry, and being the proverbial ‘low man on the totem pole’ as an assistant isn’t always very fun, to say the least. Another thing to that must carry through to other industries, is that I think no matter what level of your career you are at, you are always ready for the next one to happen well before it actually does, which can be frustrating and discouraging at times. You really have to keep at it and stay focused, just knowing that eventually your hard work will pay off. Which it does! That’s the good news 🙂

So what would you say was the most challenging?

The hardest time in my life was when I was beginning my 2nd year in LA and had no car, almost no money, only a part time job, and couldn’t afford a place to live. The computer I had finally went caput too, so I used to have to go to the library to use the internet and look for work. I had to get on food stamps and crash both on a small, dingy boat with one of my other broke friends in Marina Del Rey, and in another friend’s living room. I had no work as a makeup artist at this point, I was just trying to get by. Besides being broke, at the time I felt disheartened and depressed. I got through it just by putting one foot in front of the other, I suppose. I got another part time job and gradually built up my hours. I kept reaching out to the agencies that represent hair and makeup artists in LA, trying to get jobs assisting. Surfing Craigslist for small makeup jobs, and any other outlet I could think of. I think around the end of my 2nd year in LA, I finally had gotten my first assisting job, and things built up from there.

It’s inspiring to see how far you’ve come.  Do you ever wake up and think – WOW, I’m crushing it?

I don’t think that you ever feel like you’ve “made it”, in this line of work. Once you level up, your goals only become higher, and there’s never a ceiling. I do think the first time I felt like things were going to work out the way I wanted was when I really wanted to work with a particular client, and she ended up requesting me to go on tour with her, (which I will be doing for the rest of this year). I know that so much of this is great luck, but it truly made me feel that if you work hard and keep trying, dreams really can come true.