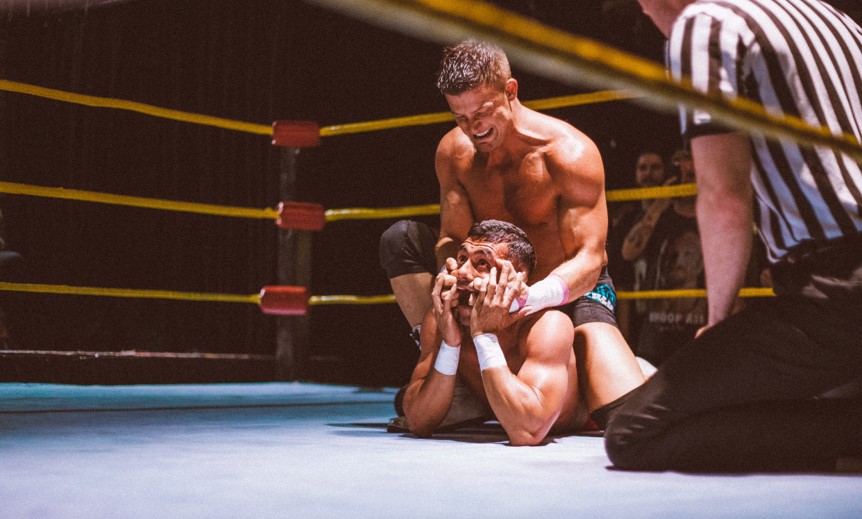 Today we’d like to introduce you to Ryan Nemeth.

So, before we jump into specific questions, why don’t you give us some details about you and your story.
I have a very unique background. During college, I got involved with live theatre and comedy. I did a few plays, got really fanatic about acting classes, and then started doing improv and sketch in Chicago during the summer. I took summer classes at iO Chicago, learning long-form improv. And I was an athlete in college as well. I was well-rounded! This was the same time frame my older brother was wrestling at OVW in WWE’s minor league system, just an hour drive away. So there was this showmanship aspect to everything, whether performing on a stage or performing athletically, for me, during those years. And having my older brother doing a version of that (specifically, professional wrestling) nearby was cool.

I had spent a few years secretly deciding what I should pursue once I left school: comedy and acting, or pro wrestling. I chose comedy and moved to Chicago. Almost immediately, I realized that it was not the right move- and I started plotting my next move. Comedy was great, but, there was just something pulling me toward wrestling. It was all I could think about. There wasn’t really a choice, it was just something I had to do. I walked into my Chicago girlfriend’s apartment one day and said, “Look, we gotta talk.” She goes, “Let me guess. You’re leaving Chicago and going to start wrestling.” I was like, “Okay, I guess we don’t have to talk!” She knew it was coming.

So I moved to Louisville, Kentucky and started training. I was following in my brother’s footsteps. By this time he was already on the main WWE roster and was doing amazing up there. I had begun OVW paying my own way to class, but within a few months, I won a full scholarship, won Rookie of the Year, held a few tag-team championships, and was a regular on the tv and live event programming. That’s when WWE noticed me, and pretty soon after, I was hired to wrestle for their new minor league territory in Florida. From there I would become a regular on WWE NXT, the sports entertainment monster’s new brand, for about three years. From then, I would continue wrestling for many other companies around the US and overseas.

Then I made the move to Los Angeles and came full-circle, focusing on writing, acting, and comedy. That has been going well. I perform regularly at places here like UCB, Second City, and others, and have performed in countless other cities on tour with my older brother’s comedy variety show.

My current project is HEEL, a film set in the world of pro wrestling. It draws from a lot of areas of my background. It’s a wonderful way to combine my wrestling background with my current acting and writing life. And since it’s a crowdfund project, I’ve been doing a lot of interactive stuff on social media with wrestling fans. It’s really an amazing thing, to combine all these aspects of my life for this one big project. And I’m thrilled to have such an amazing director, Maggie Levin, at the helm. I love the script, I love Maggie’s style. I love the challenge of making a film. I can’t wait to start shooting.

We’re always bombarded by how great it is to pursue your passion, etc – but we’ve spoken with enough people to know that it’s not always easy. Overall, would you say things have been easy for you?
My journey has not been smooth. There have been some very serious and deep low points. Then again, there have been some amazing moments as well. Being able to wrestle with my older brother in WWE rings a few times will always be some of the happiest times for me. How many other people can get to say they’ve done that? Only a few. I’m very lucky.

I also got my first film into the film fest circuit as well. DADDY’S BOYS, a short I made, debuted at the 42nd Cleveland International Film Fest this past year. That was such an amazing, encouraging thing. It was like a pat on the back from the film gods, like some voice saying, “You’re on the right path. It’s okay that you don’t wrestle full-time.” That sounds weird, but it’s hard to adjust! I mean that.

Transitioning out of wrestling full-time and trying to make headway in the acting, comedy, and writing world is not easy. You instantly have to swallow your pride. A chip on your shoulder is great, sometimes, but a lot of the time you have to remember that not everyone cares about wrestling, and you’re just any other person. You’re just some dude. There’s an adjustment period for sure. Wrestling messes with your head and blurs the lines between reality and fantasy. That’s actually a theme that comes up in HEEL, that confusing middle ground of what’s real and what’s not. Wrestling is unique in a way, with that stuff. You’re never “off.” You’re expected to be that same character, in a way, behind the curtain as well. You’re always “working.”

There have been some challenges. Even just in personal life. I had to have a little cancer surgery a few years back. That was humbling. To go from being a professional athletic performer to being limited physically like that- even as minor as a procedure as it was, and as quick as the recovery was- it’s rough. It’s humbling. It makes the comeback sweeter, though.

I don’t want to say too much about some of the harder life challenges here, other than I drew on them a lot to craft this script. I think HEEL will be a dark, gritty, and often disturbing film. It looks at the world of wrestling from the inside out, which is something you don’t always get. I can’t freaking wait to make this thing.

We’d love to hear more about your work and what you are currently focused on. What else should we know?
I do a lot of things. I act, I write, I perform live comedy. I’m also still plugged into the wrestling world. I also do private fitness training with people like Jeff Tremaine (director on things like THE DIRT, creator of JACKASS), Anna Akana (YouTube), and actors and writers like Mary Sohn and Shelly Gossman (AP Bio).

I love to help people, and I love to make people smile. Whether that’s making people laugh onstage, making them boo me during a wrestling match, or whatever it is. There was a saying in wrestling that veterans would tell new guys: “Leave the locker room better than you found it.” I don’t know how universal that sentiment is, but it was always a thing in the locker rooms I was a part of. Specifically, it means cleaning up after yourself, in order to show respect for the venue, and for your fellow wrestlers, and for the business. If venues are happy, you can run more shows, and the business will thrive, etc. But I also apply it to life. I want to leave, this (whatever *this* is: life, a job, an experience with a person, a project, whatever) better than I found it. So I want things I do to have a positive effect on the world.

What were you like growing up?
Growing up, I was very shy. I was terribly quiet and shy until around fifth or sixth grade. That’s when I started getting into punk rock, skateboarding, and having friends. I skateboarded with my younger brother and our little crew of friends for like the next seven years. I wrestled in high school, I was in a band. I went from being this shy kid who would turn red if he had to talk in class, to this outgoing artsy athlete dude. I was very into creating and performing. I loved it.

And my family was great. Very encouraging. As long as I worked hard at things and did the best I could in school, my parents were super supportive. 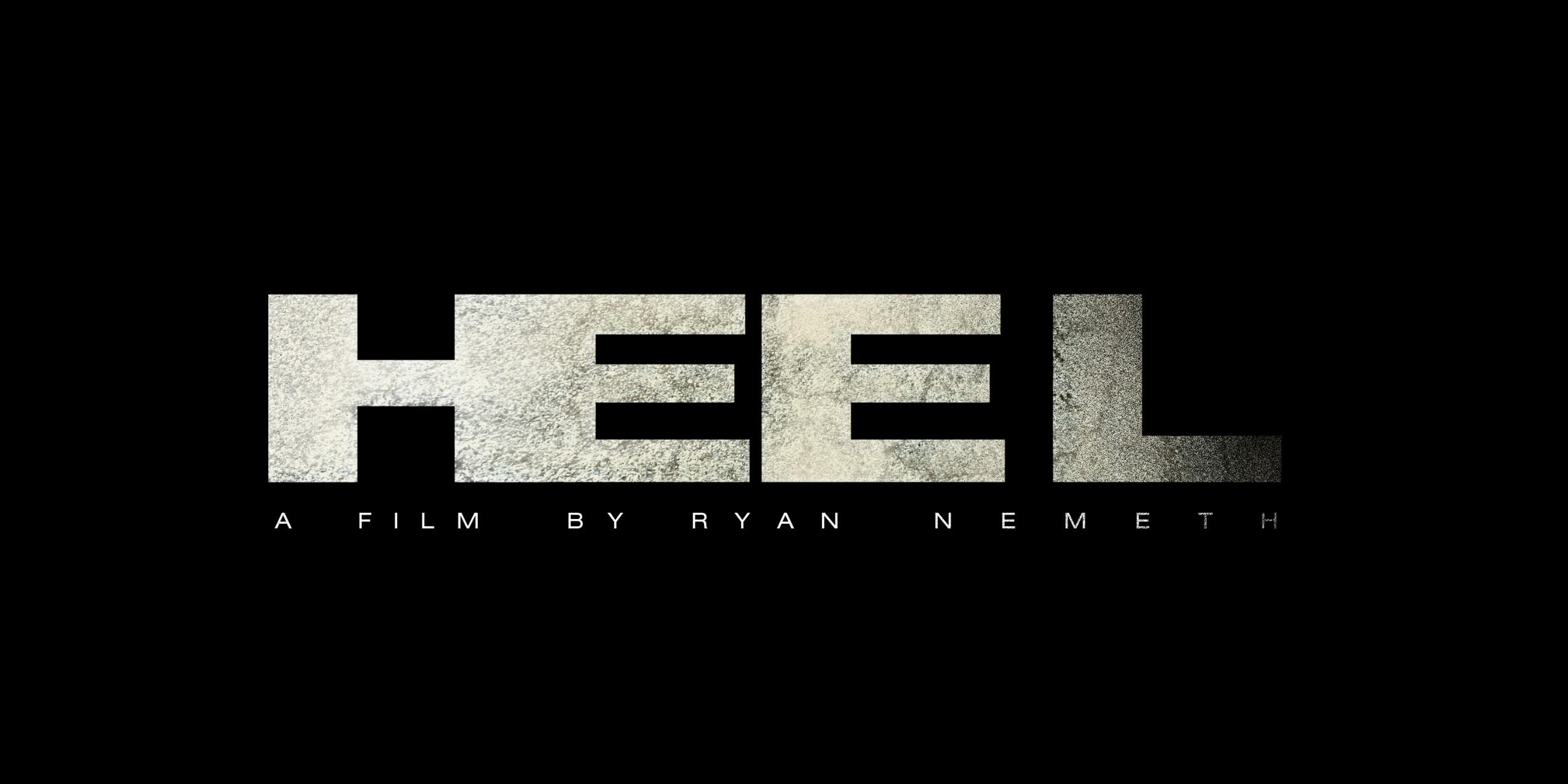 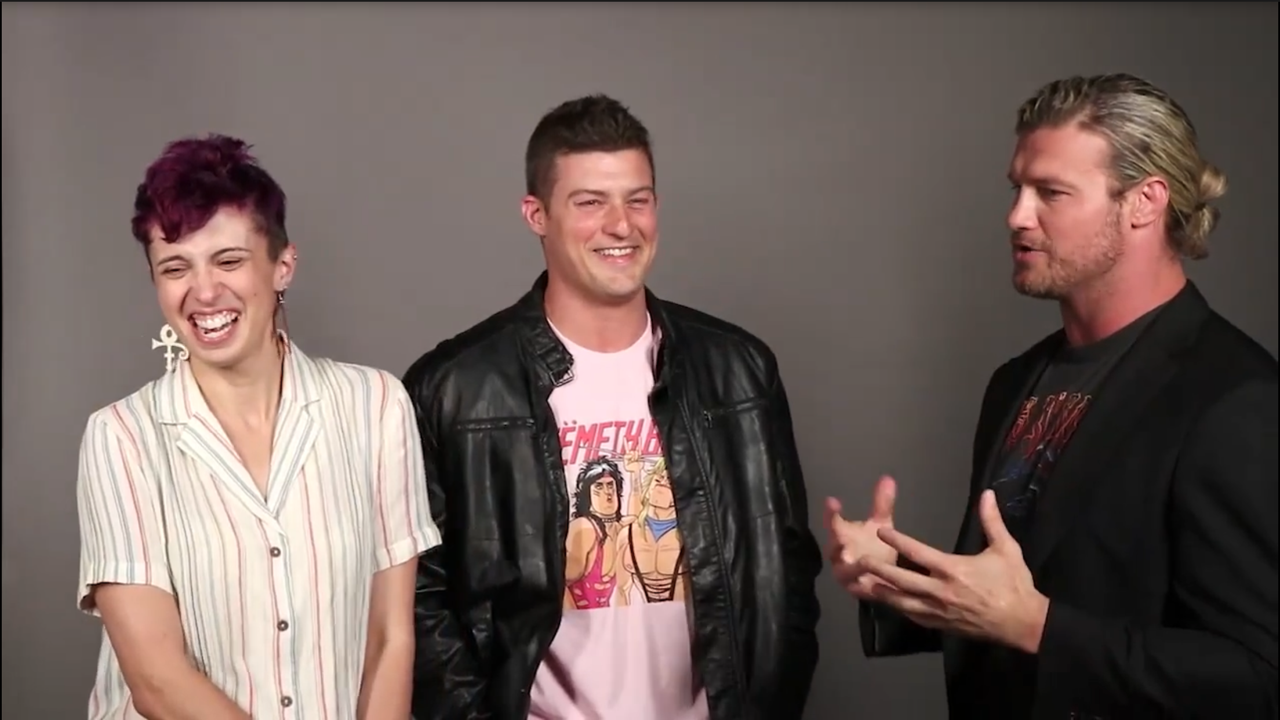 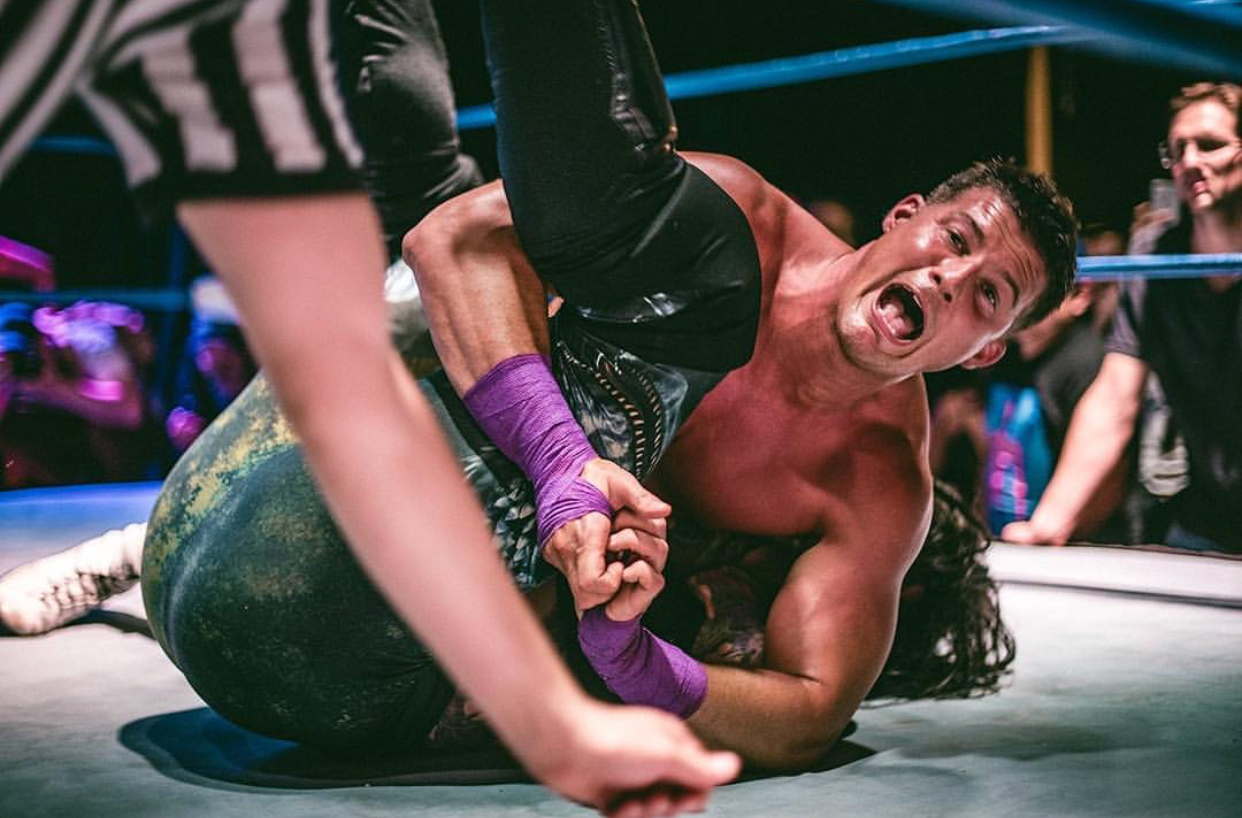 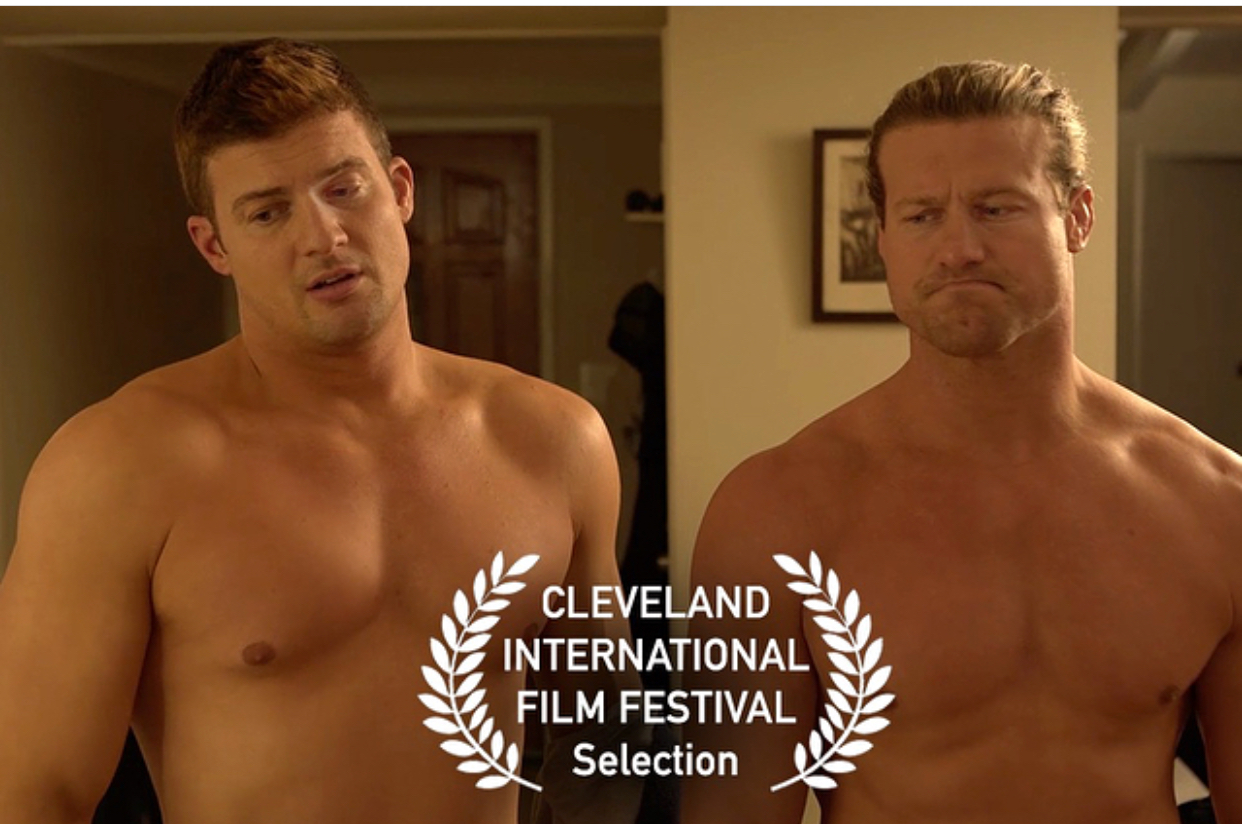 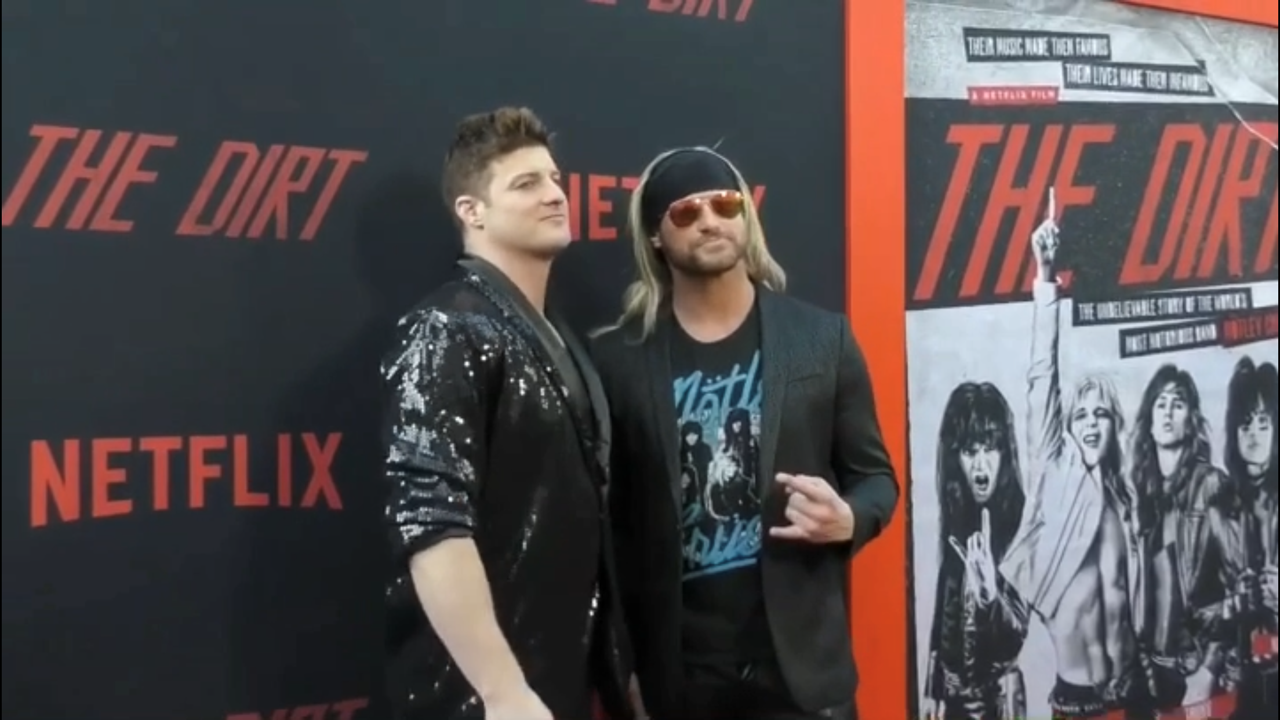 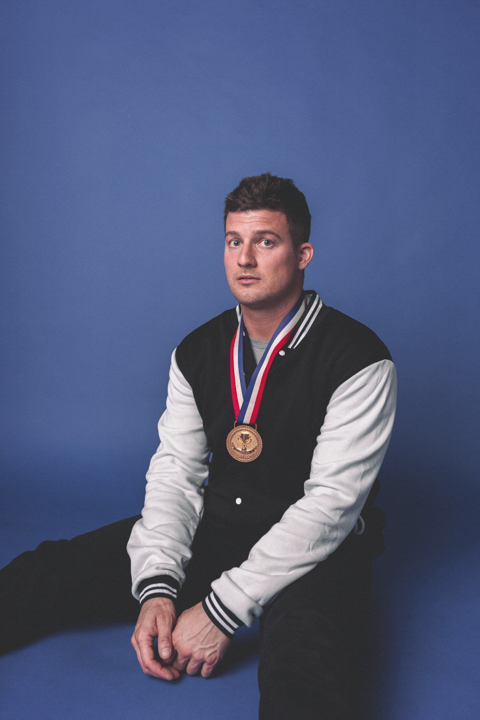 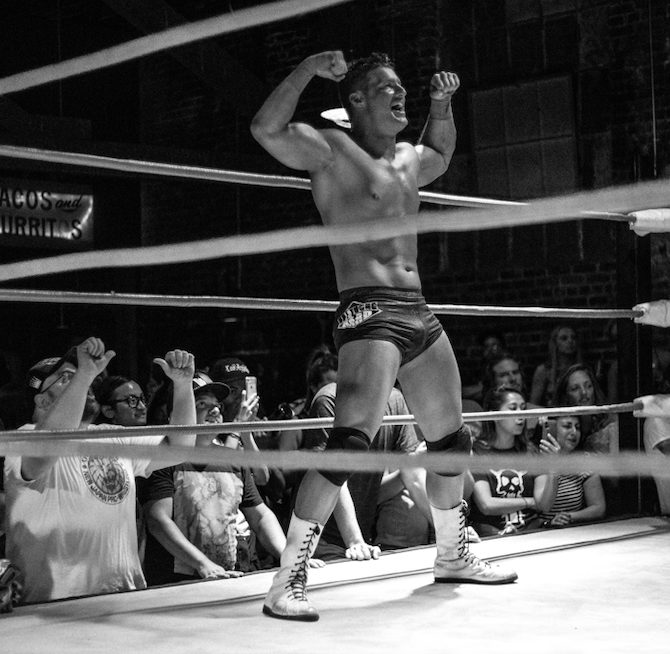