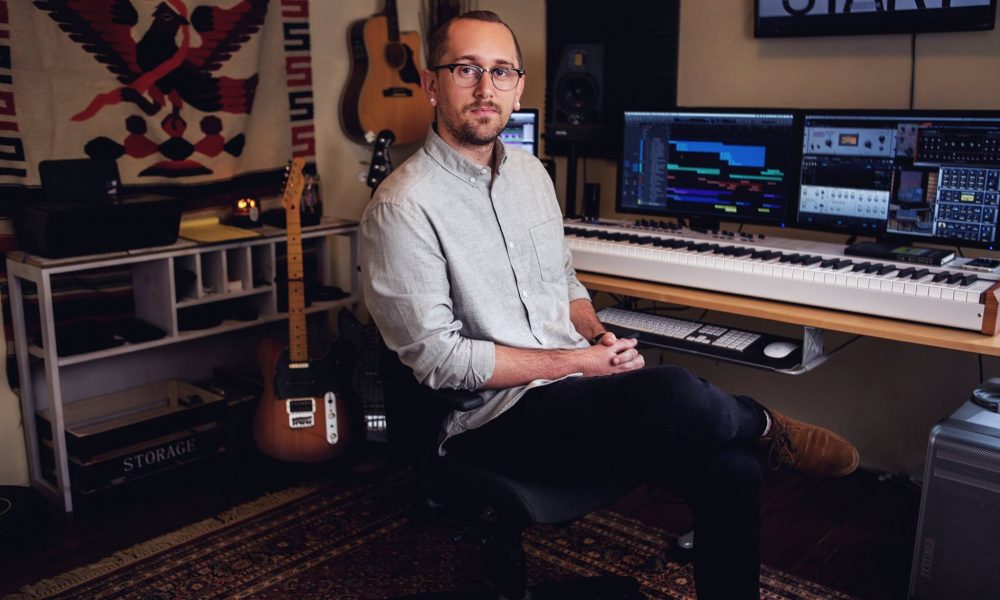 René G. Boscio at his studio in Glendale, CA.

Today we’d like to introduce you to René G. Boscio.

Thanks for sharing your story with us René. So, let’s start at the beginning and we can move on from there.
My relationship with music began at the age of 11. Several years of skateboarding around my hometown of Aguadilla, Puerto Rico and playing video games like “Tony Hawk’s Pro Skater”, resulted in me getting really into punk music. My favorite band was Blink-182 and I wanted to be like Travis Barker, so I somehow convinced my parents to sign me up for drum lessons. After about a year of pure rhythm and a lot of noise, my parents slipped a guitar into my hands (hoping to tone things down a bit), and so my creative journey began.

I would spend the rest of my teens writing songs and playing in bands. One thing that was very clear to me was that I didn’t like sticking to one genre. I’d write music in anything from pop-punk to hardcore, to Latin pop and ambient electronic music. This was all self-taught and a great playground for creative exploration.

When it was time to graduate from high school, I knew that music was the only thing I was really interested in pursuing. Given our family’s limited resources, my only realistic option was to stay local and study classical composition at the Puerto Rico Conservatory of Music. The only problem was I knew little to nothing about classical music and didn’t have much formal training. Nevertheless, with a little help from friends and family, I prepped for the auditions and got admitted into the bachelor program.

Once I started studying classical composition and learning about how to compose music for the orchestra and other instruments I had never heard of, the creative possibilities really opened up for me. Coming from a pop/commercial background, writing avant-garde or contemporary classical music didn’t feel natural to me, so my composition teacher was always pushing me to step out of my comfort zone and allow myself to go places I hadn’t explored before. Through this creative struggle was how I ended up discovering my passion for film music.

I fell in love with the power music had in films, and how it was able to subconsciously shape the audience’s experience. I also reveled in not only the possibility but more so the requirement, of having to develop compositional skills in every possible genre. Having grown up with musical influences from a wide variety of backgrounds such as Puerto Rican artists, American and European rock, as well as classical composers, this newly discovered environment seemed like the perfect playground for all of my influences to collide.

I spent the second half of my bachelor’s degree exploring this new found love for film music outside of the Conservatory’s program. I started reaching out to film students in neighboring film schools and expressing my interest in collaborating with them. Soon enough, I was being hired to compose music for both student and independent short films.

Towards the end of my bachelor’s, I managed to win a grant which focused on the development of art-oriented businesses. I pitched and got funding for an affordable film scoring business focused on providing top quality scores for the independent film industry in Puerto Rico. Once I graduated from the Puerto Rico Music Conservatory, I began working on scores full time.

Shortly after graduating in 2013, I got word from the administration at the Conservatory that a Hollywood composer would be doing a two-day workshop. With great enthusiasm and little knowledge that those two days would change my life forever, I participated in the workshop led by composer Blake Neely (The Mentalist, Arrow, Everwood).

Mr. Neely happened to be looking for a second assistant at the time. Impressed by the work I did during those two days, he offered me a week-long internship at his studio in Los Angeles, which resulted in a job offer for that assistant position. Needless to say, I took the job in a heartbeat. Jump-cut to a few weeks later, I was now living in L.A., working for a renowned Hollywood composer, and feeling like my dreams were finally within reach.

I was fortunate to have a very supportive family who always encouraged me to chase after my dreams, even if it meant moving thousands of miles away from them. Starting from scratch in a new city was definitely not easy, but I had the great incentive and determination to push through any hardship that would come from this exciting development in my journey.

The following 3 years were spent learning the ropes and working my way up from assistant to additional composer. As an assistant, I learned about scheduling, fixing unsolvable tech issues, doing prep work for the scoring stage, and more. I also learned how to program synthesizers, adapt and arrange pre-existing music, and ultimately, compose additional music for television series such as Riverdale, The Flash, Arrow, and many more. After 3 very insightful and ear-opening years, the time came to begin my own journey as a freelance composer.

By the end of 2016, I started reaching out to independent filmmakers with hopes of laying the groundwork and surviving my first year as a freelance composer. After nearly 400 emails in two months, I started getting meetings with filmmakers who were interested in collaborating with me on their films. Slowly but surely, my work as an independent composer started taking flight.

Since then, I’ve had the privilege of working with insanely talented directors and producers such as Ivonne Coll (Jane The Virgin), John Lacy (American Crime Story), and Marco A. Díaz (Mr. Robot). I’ve also had the opportunity of underscoring fantastic performances by renowned actors such as James Franco (The Disaster Artist), Morena Baccarin (Deadpool), and Marielle Scott (Lady Bird), to name a few. Aside from the work I’ve done on TV and independent films, I’ve also composed music for several commercial campaigns such as Chevrolet, BMW, and Disney; production libraries, such as Lalela Music and STX Entertainment; and trailers, such as a TV spot for 2017’s Summer Blockbuster, Wonder Woman.

The journey is long, and I’m still fairly early in my career with a lot to learn. The dream is to be able to create a bigger impact in the world with stories that resonate and inspire change. As a Latino in the industry, I believe this can all be achieved while making sure we have an inclusive and respectful culture; striving to provide access to people who otherwise might not have it, and creating equal opportunities for brilliant creators to come together and share the journey of a lifetime.

Great, so let’s dig a little deeper into the story – has it been an easy path overall and if not, what were the challenges you’ve had to overcome?
There are always obstacles, but I’ve made it a habit of seeing challenges as fuel for opportunity and change, instead of limitations.

On a personal level, one of the biggest challenges has been the distance from my family. We try to shorten it by speaking on the phone once or twice a week, and I try to travel back to Puerto Rico at least once a year, but it’s not always possible. Then you think of horrible things like the hurricanes, which devastated the island last year, and you feel terrible being so far away.

My family was fortunate enough to not suffer major structural damages, but so many of my friends lost their homes and even loved ones. Moments like that definitely have an impact on your day to day when deadlines are creeping up and you need to deliver, yet your heart and your mind are elsewhere, wondering if there’s more you could be doing to help…

On a professional level, I think making the leap to freelancing has definitely been one of the biggest struggles I’ve faced. It’s a scary thing, not knowing where your next paycheck is going to come from, or for how long. Schedules are always changing and you can never be too sure that the work will be there, so you tend to overbook in order to not be left hanging dry.

Then suddenly several projects land on top of each other and you’re working endless hours to meet deadlines and keep everyone happy. It’s definitely a challenge, but I kinda love it. I’ve found that I’m much more productive under tight schedules, so I just embrace whatever comes and trust God that we can handle it.

We’d love to hear more about your business.
My job is to help tell stories through music; figure out what’s missing from the scene and find a way to guide the audience towards what isn’t being said or shown on the screen.

Essentially I have to give a little bit of myself away every time in order to create a unique score that will take the story to the next level, and communicate the director’s vision more effectively.

Due to budget restrictions on independent films, most of my previous scores have relied on instruments I can play and record myself, like guitars, piano, percussion, as well as synthesizers and a large array of software instruments. I think most people associate me with hybrid, somewhat synth oriented scores, combined with acoustic elements, and I wouldn’t disagree that my natural tendencies gravitate towards that sonic realm.

One of the main reasons being that I think having to create these sounds from scratch, as opposed to using more familiar sounds like a string or woodwind section, give you a wider toolkit to crafting a unique sounding score for each film. That being said, I can’t wait for the day where the budget allows for the use of a full orchestra and I can go for that bigger Hollywood sound.

I think all of our life experiences and how we relate to the world around us is what shapes our artistic sensibilities and unique voices, which in turn ends up being what sets us apart from each other. The combination of influences and experiences give us all a vantage point that is unique, allowing me to bring a personal touch to every project I am fortunate to be a part of.

What moment in your career do you look back most fondly on?
This might sound a bit unconventional, but I think the moments where I’ve felt the most proud of myself have been times when I’ve been able to help others advance in their career. Whether it’s providing helpful insight to younger composers who come to me for advice, or connecting filmmakers to each other which result in beautiful collaborations which I helped facilitate, I feel like those moments of selflessness, where I’m helping others without any interest or benefit to myself, are what fuel me both as a person and a professional.

To that point, almost a year ago I created a networking event directed towards connecting Puerto Rican artists living in Los Angeles. We call it “Sorullo Nights”, based on a type of get-together event from our Puerto Rican culture called “parties del sorullo”, which are essentially potlucks.

The difference being that in our Sorullo Nights, what people are asked to bring is their talent and current projects, making it a sort of “show and tell” for all to get to know and support what our community has been up to. We’ve been doing it every three months, and the turn out has been really inspiring, resulting in many newfound relationships and collaborations between the attendees. 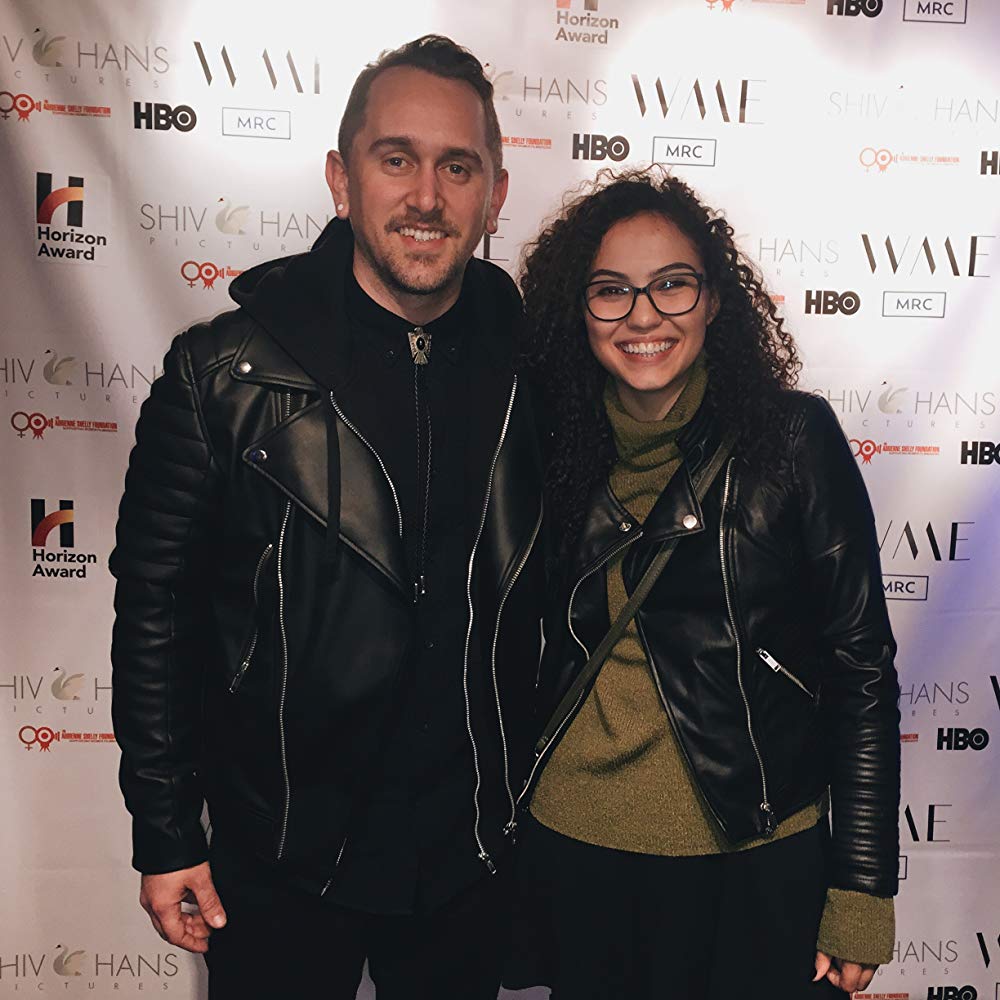 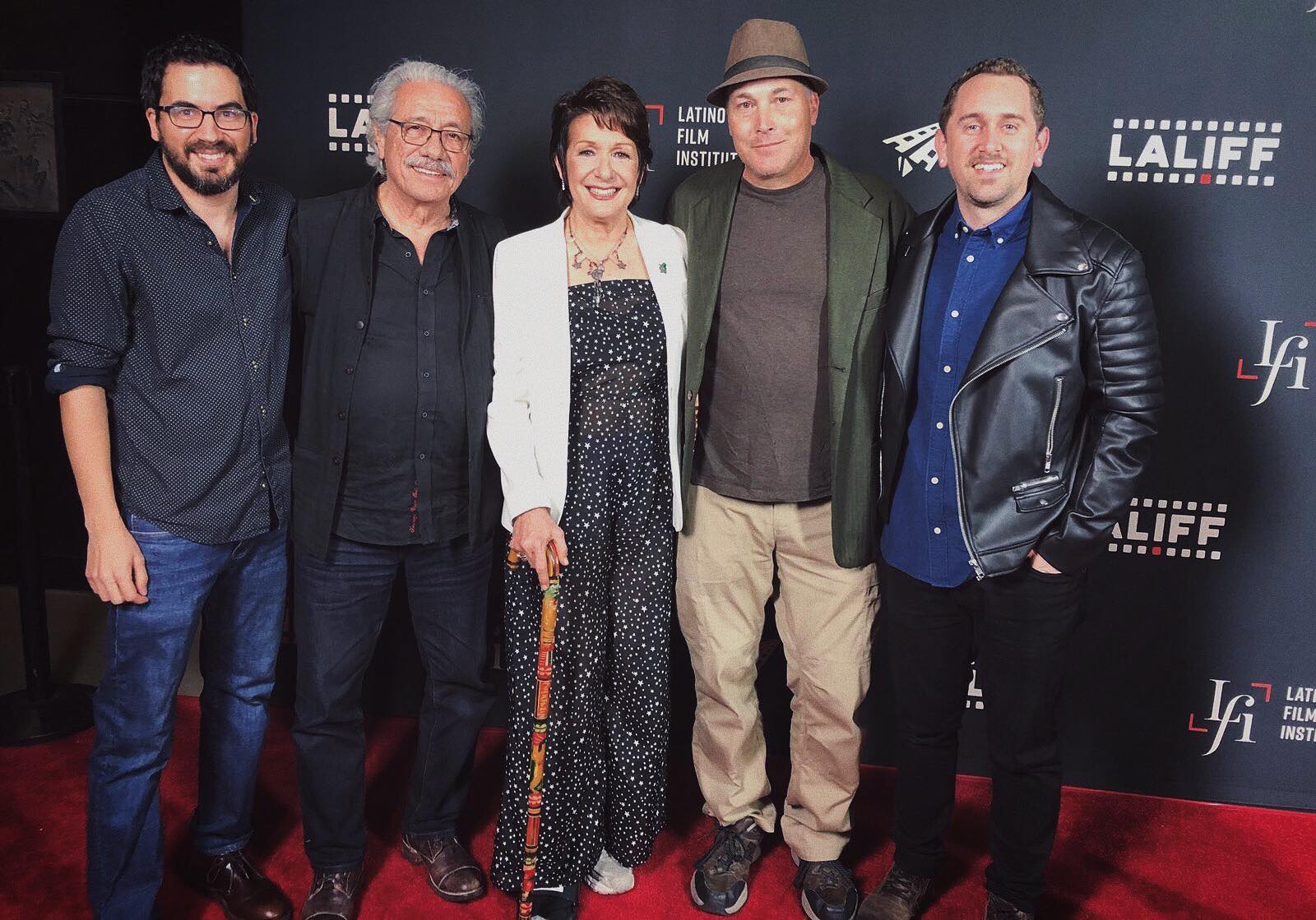 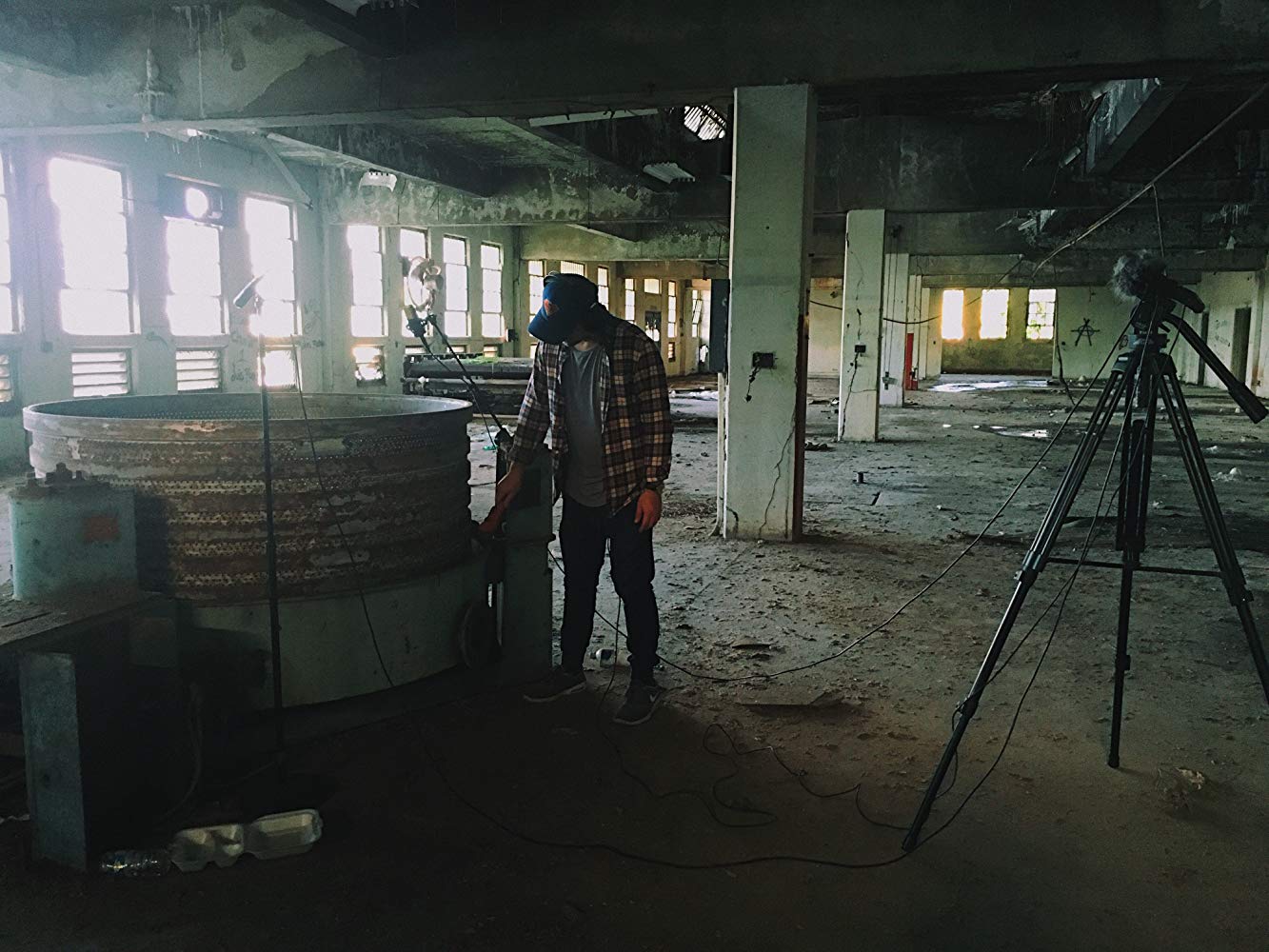 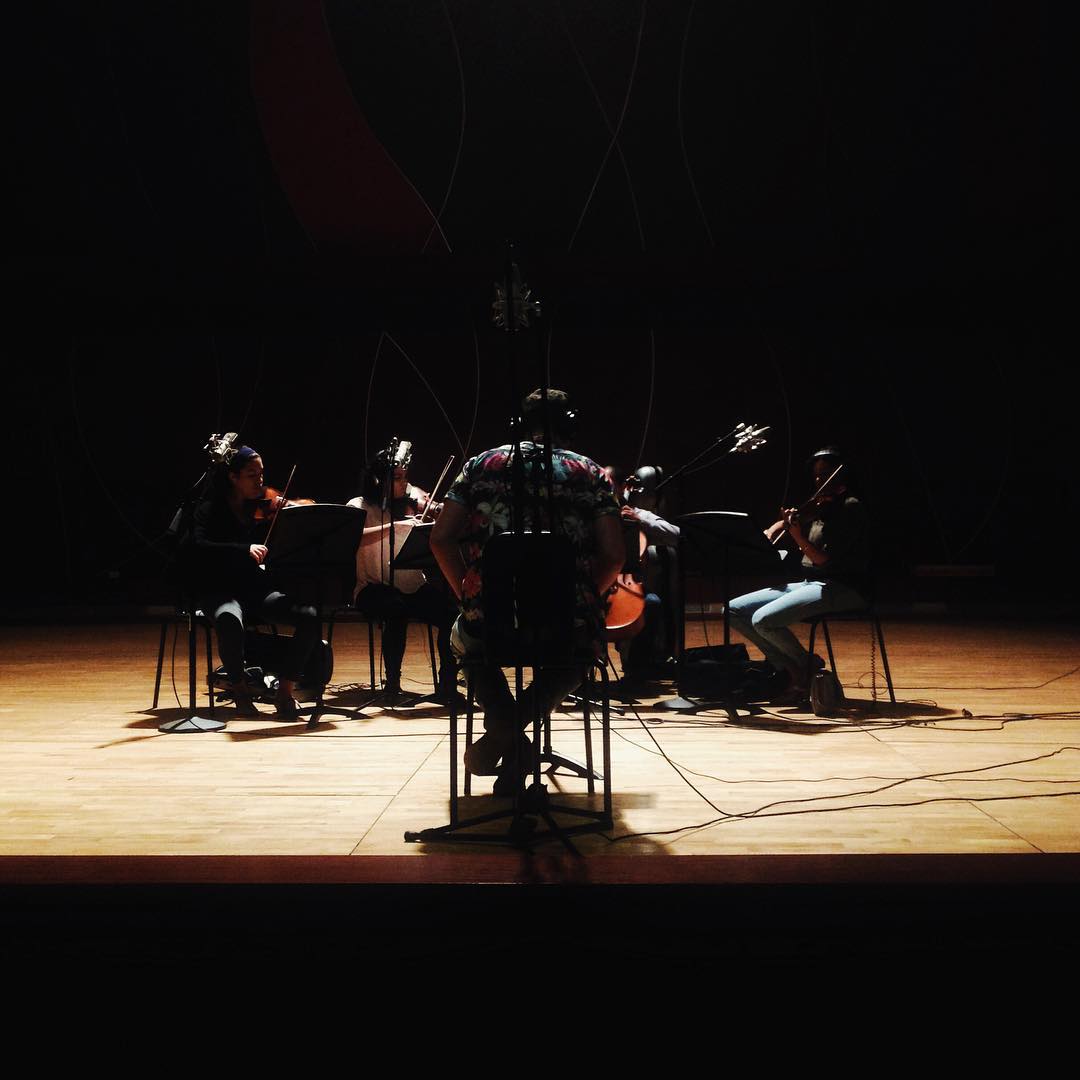 René G. Boscio recording a string quartet for his 2015 EP “a guide to longing”. 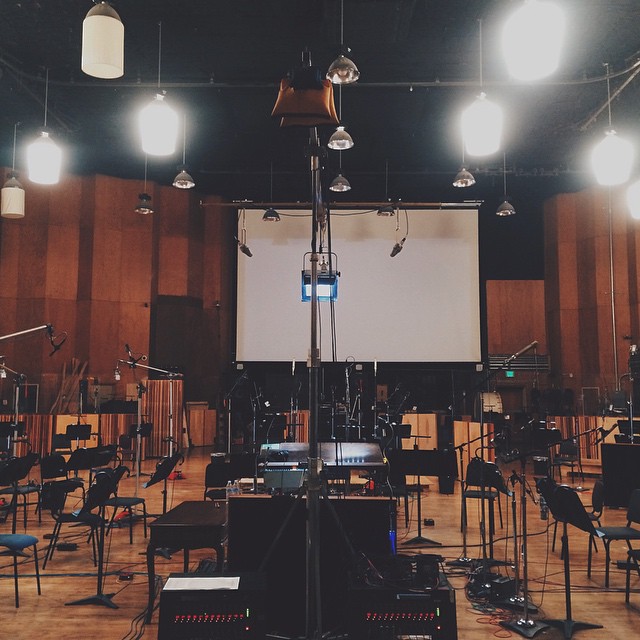 A glimpse of the historic Newman Scoring Stage at the 20th Century Fox Studios, minutes before a scoring session for the SUPERGIRL pilot.