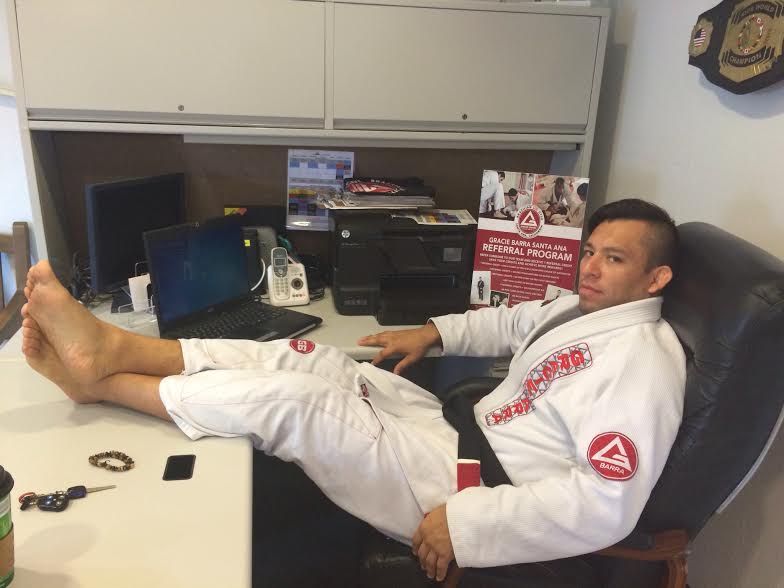 Today we’d like to introduce you to Ramses Patino.

Ramses, let’s start with your story. We’d love to hear how you got started and how the journey has been so far.
I recall seeing my first UFC fight at around 12 years old. I saw Royce Gracie fighting and thought it was something I wanted to aspire to in the future. What caught my attention was how he was submitting larger opponents, without throwing a single punch. But, when I told my parents that I wanted to start training Brazilian Jiu-Jitsu (BJJ), they did not have the finances to fund my interest. On top of that, they thought it was a very violent martial art, so they did not support it for this reason. Later down the road, I started training MMA; but after some time, I realized MMA was not the discipline I wanted to dedicate myself to. I knew I wanted to do BJJ, but at a Gracie academy. I was captivated and sold on the philosophy and techniques of the Gracie family. As soon as I noticed there was a Gracie Barra—Gracie Barra Santa Ana (GBSA)—opening down the street from where I was living at the time, I decided to enroll myself and my then 7-year-old son. We’ve both been training at GBSA ever since early 2007. On May 27, 2015, I finally received my black belt from Master Carlos Gracie Jr. Then the following day, I was honored with the position of Head Instructor of GBSA. As the Head Instructor, I currently teach all the classes, for both kids and adults, at GBSA. I feel very proud and blessed to be able to say that I am responsible for teaching BJJ knowledge and self-defense to 140+ kids and adults. For the past 2 years, I have not felt like I am attending work every day. I am passionate about BJJ, which I believe is what makes it so much easier to see what I do as fun, rather than boring work.

Great, so let’s dig a little deeper into the story – has it been an easy path overall and if not, what were the challenges you’ve had to overcome?
One day when I lost my job, I was deeply saddened because I thought it would mean I could not afford training BJJ anymore. I recall, that same day that I lost my job, I went to my very first Professor, Ulpiano Malachias, and told him. I remember his response to this day because it really meant a lot to me. He told me to just keep training and that we would talk about me paying him later. I felt that I needed to train even harder to show him that I was appreciative of what he did for me, so I trained as much as I possibly could. I trained every day since then, sometimes, two to three times daily when there were multiple class times throughout the day. Another struggle was that I was out of work for 6 months. Professor Ulpiano gave me a part-time job, but financially I needed a full-time position. I started out working in the office doing customer relations, then later I began assisting in the adults BJJ classes. I was only a blue belt when I first started teaching. I found teaching was something that I really enjoyed. Since I really liked it, I made up my mind that I wanted to pursue teaching at a higher level ultimately. I remember having to turn down quite a few jobs because if I would have accepted them, they would have taken away my opportunity to continue with teaching BJJ. On top of that, being a single father was always a challenge for me. There were definitely a few times I thought of giving up and finding another job, but I had promised myself even before I started training, that as long as I didn’t break any bones, I would find a way to keep training. I have endured through many injuries—ranging from cauliflower ears to bruised ribs, an injured left knee, a snapped tendon in my right hand, cut open eyelids, and a few others—but none of those stopped me from continuing my BJJ journey.

Please tell us about Gracie Barra Santa Ana.
Gracie Barra Santa Ana is one of the very first premium Gracie Barra schools in the state of California. This specific location opened 10 years ago, started by Professor Ulpiano Malachias, who now lives and teaches in Texas—GB Westchase. GBSA is currently owned by Victor Miranda, a purple belt in BJJ, and Professor Roberto “Tussa” Alencar, who is a third degree BJJ black belt under Master Carlos Gracie Jr., and a world champion in BJJ. Gracie Barra specializes in teaching Brazilian Jiu-Jitsu, a martial art that is about 90% ground techniques (submissions, controlling your opponent with leverage and positioning) and 10% judo (takedowns). Gracie Barra is known for its success in being the biggest BJJ franchise all over the world. We have a set curriculum for each level of kids and adults training with us, ranging from fundamental to advanced techniques. As a company, we are most proud of our success in creating a family-like environment. Our motto is, “Organized like a team, fighting like a family.” We want every person that comes through our doors to feel like they are sitting and training amongst family members. In addition to this, we are set apart from other BJJ/martial art academies with our training philosophy and dojo etiquette. We respect our training environment—the mats—at all times. We respect our training partners and make all levels feel welcome. We also adapt to a certain lifestyle because of BJJ. This includes eating healthier, maintaining more healthy activity throughout the week, and generally working to improve one’s life in all areas with newfound self-discipline learned from BJJ.

Do you look back particularly fondly on any memories from childhood?
I grew up in a household of five children, including myself, and my two parents. My favorite childhood memory was when I spent one whole summer living in Mexico with my Uncle Abel, when I was about 6 years old. I was the only one out of all my siblings who went to stay with him and his family for that summer, so it felt extra cool to me. Everyone wanted to spend time with me, so I felt very welcome. They all treated me nicely.