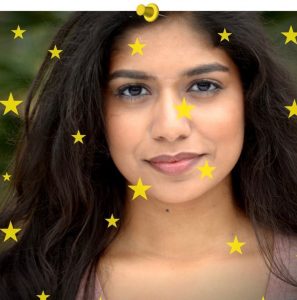 Today we’d like to introduce you to Prathiksha Srinivasan.

Thanks for sharing your story with us Prathiksha. So, let’s start at the beginning and we can move on from there.
I’ve always wanted to be a writer. I’d journal for hours and write personal essays even as a five years old, just for the love of doing it. But the truth never escaped me, this was just something I did for fun. I could never be a writer for real. I tried to make myself a doctor, a lawyer, anything that would make my family proud and allow me to fulfill my role as a good daughter and heir to their immigrant story.

And then I got really fucking clinically depressed. I wanted to be a screenwriter and there was nothing else for me and it seemed as plausible as becoming an Indian Geisha or a professional tennis player when my lung capacity was laughable and my hand-eye coordination was a farce. I wanted something impossible.

But then… I got into the inaugural class for the HBO Diversity Fellowship. I ended up hauling ass out my suburban town in Texas and made it out to LA (and not really with my parents’ full blessing, mind you) and with no plan, no money, no NOTHING, I worked on my first screenplay… while I had a secret. I seemed like I had it all to everybody else, but really? I was homeless. Like…. REALLY homeless. Like, I moved eleven times in twelve months. Like, I cruised Craigslist and Facebook looking for sublets so I could live in places a couple of weeks at a time, with only a cardboard box and a backpack to my name.

That was five years ago. Today, I have a luxury apartment and drive a fancy car, I have worked on four shows, my film PLAN B has been green-lit. I am living my dream, I have accomplished so much more than I ever thought possible. My parents are incredibly proud of me. I have what I want, and for the first time in a long time, I am writing from a place of love and enjoyment, and not just from a place of survival to get a roof over my head and food on my plate. I feel like a kid again, like the girl in me that writes for hours for the love of it.

Overall, has it been relatively smooth? If not, what were some of the struggles along the way?
It’s been a pretty rapid rise… on the outside. Really, there were moments of self-doubt, a year of homelessness, of living in rough neighborhoods and fighting every day to make it. My first job, I got a standing ovation for “being the diversity hire” and then was fired two months later because the writer’s room just ghosted me. I’ve had to work for free, and even tolerate outright harassment. I’m looking forward to society changing itself on things like that.

We’d love to hear more about your work and what you are currently focused on. What else should we know?
I am a screenwriter and actor. I am immensely proud of who I am and where I come from. Life isn’t always sunshine and roses, and it’s not always about the affluent, but it certainly seems that way on screen. I champion not only diverse voices, but I search for the specificity and joy in their lives. Difference is not a disability, it is an honor. I’m known for my work which has a breezy humor that teeters on the boundary of going-too-far while still remaining palatable and digestible. At the end of the day, life can be pretty fucking weird, and I don’t want to shy away from that, but my work moves us toward life-affirming content. Joy is not a privilege, it is a right.

If you had to go back in time and start over, would you have done anything differently?
Oh, plenty. I would say that thinking critically and structurally never did the body harm. Art can feel ephemeral, but technique is forever. And you learn that along the way, but getting a head start on that is always good.