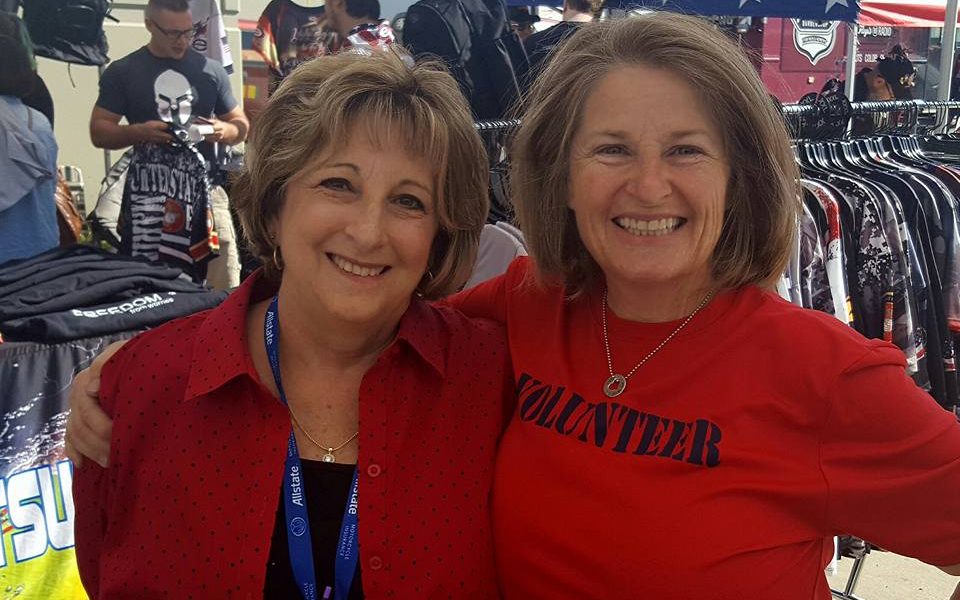 Today we’d like to introduce you to Penny Lambright.

Penny, let’s start with your story. We’d love to hear how you got started and how the journey has been so far.
Patriots and Paws started out of a need of taking care of our Veterans Active Duty and Reservist. My nephew who at the time had served two tours in Afghanistan and Iraq came home and brought to my attention the fact that some of his soldiers were in need and there were no options for them. My dad served in World War II and Korea and was in 7 major battles before he was 21. He built my parents furniture in the 50’s out of fruit crates, the need was as prevalent as it is today, there is just more attention brought to it now, then there was then. People didn’t talk about those kinds of things, you should be able to take care of your own family, our military does they, take care of all of us and yet they have a need and as the community we need to help them.

There is a need for those who served in our military to have practical home furnishings and that’s what we provide basic needs, simple things that we take for granted like beds, dressers, nightstands, silverware pots, and pans.

It always tears my heart when I hear a Veteran say they didn’t think anybody cared and I know there are those of us who do because of the great work that is happening through Patriots and Paws and all of those lives that we change. We are a no red tape organization.

You served and can show proof, you don’t have to be wounded disabled a certain rank or certain branch, just signed a blank check to our nation that says I will serve and protect Patriots and Paws will take care of you.

Has it been a smooth road?
The road hasn’t always been smooth and we still run into pot holes here and there, I think the biggest struggle is when we started we figured everybody would want to jump on board and help us because were serving our military. You don’t have to like why we were somewhere, but we feel like you should respect those who made the decision to go and fight for our country, they follow their commander-in-chief and don’t question why.

At first getting the word out and letting people know that we were here to help them, a lot of people didn’t believe that we actually did what we did and once we started showing them that it was true we will help them because they served in the military the word got out.

Refrigerators, washers, dryers, gas ranges are things that we have waitlisted we can usually help them right away with other things but that waitlist could be 2 to 3 months long.

We still struggle with finances and Volunteers and the need to have a larger building (we are currently in a 5200 sq. ft. building) and it is NOT donated. We need a newer truck that we can go out and pick up the items that the very generous community gives to us, the truck we have was donated and because of the emissions in California, we need a newer one, we have a 16 ft. box truck with a lift gate, that is 20 years old. We currently pick up in Orange County and some areas along the border. There are times that we have to turn things away because we don’t have the trucks to pick up items or the space in the warehouse to take those items in and then they go to other organizations. They are definitely things we could use but logistically we have that struggle and work with that every day to see how we can fix it.

So let’s switch gears a bit and go into the Patriots and Paws story. Tell us more about the business.
At Patriots and Paws we take care of any Veteran Active Duty and Reservist throughout Southern California from Fresno to the Arizona border to the Mexican border to the Pacific Ocean. If they served we take care of them we do not turn them away there are no organizations that have as wide of a span of helping our military as we do.

The Paws part of what we do is, we will unite a rescued animal with a Veteran who would like an animal so that it can be trained to become a service animal and we work with two local agencies that are Veteran owned that train the Veterans and their dogs to become service animals giving a purpose and saving two lives and that we are very proud of. Everything that we do at Patriots and Paws is at no cost to those who we serve.

We are proud of the work that we have done so far. We are grassroots organization and we are boots on the ground and we get it done we just don’t say were going to do something and push a lot of paper and not really help, but when you see the numbers and you talk to those who we have served and you watch the videos that we take of them you can see what a difference that we are making. Those that support us are making the difference because without the support of our community we can’t do what we do. It takes a village and our village needs to grow more so we can help more of those who give us our freedom. We have awesome volunteers and without them we would be nowhere.

There is no reason that every county or every couple of counties could not have a program like we have. Our goal is to go nationwide one day and take care of even more of our Veterans.

How do you think the industry will change over the next decade?
We would like to have other locations going into Las Vegas and Phoenix and slowly going across the nation in the next 5-10 years. In the next 1 to 2 years we would like to expand our Paws program.

One of the big changes we would like to make which is we would like to have a kennel that would be open to the public that they could support us and with that support we would be able to help the Veterans who may need to go and have medical treatments or may need to go and get help with other challenges that they face like drugs or alcohol and they won’t do that because they don’t have a place to take their friend there buddy, the one who never leaves them and is always by their side their pet or as for a lot of us our family members.

Our kennel would be a way to support them and they would still be able to have their animal when they came back. A lot of our homeless won’t come off the streets because they can’t find a place that will take their animal so they would rather be on the street because their dogs and cats mean everything to them they will not leave them. In the military, you were taught leave no one behind they will not leave behind their four legged family members.