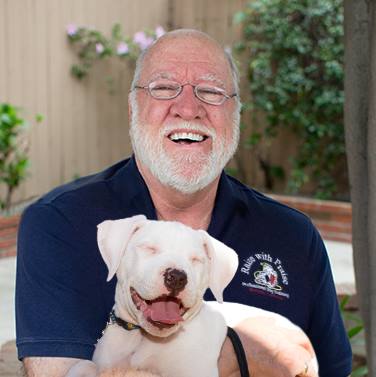 Today we’d like to introduce you to Paul Owens.

Paul, can you briefly walk us through your story – how you started and how you got to where you are today.
The first impression I had with a dog happened when I was 5 years old and my dad brought home a puppy on Christmas morning who chased me up the stairs and scared the living daylights out of me.

Over time, we became friends and our family had 3 dogs while I was growing up. We were taught the training methods of the time: rub nose in poop, knee in chest, pin on ground and all the rest.

I adopted my own dog, a Golden I named Tara and we attended traditional training classes which included the choke collars, pinning, leash corrections et al. I started to apprentice with the teacher and eventually went on my own. Tara and I won many competitions together, which is why I can speak with authority that aversive training and punishment can work.

That being said, I switched to force-free, reward-based training in 1988 and since then, helped thousands of people educate their dogs using more positive and less stressful educational tools. This is why I can also speak with authority as to the effectiveness and certainly kinder and more compassionate training methods which I now espouse and that more and more trainers use today.

Paul Owens is the author of three books: the bestselling The Dog Whisperer: A Compassionate Nonviolent Approach to Dog Training (Adams Media) which has been translated into several languages and has sold over 350,000 copies all over the world, The Puppy Whisperer and The Dog Whisperer presents: Good Habits for Great Dogs. He also produced and is featured on three Dog Whisperer DVDs: The Dog Whisperer, Volumes One and Two and the 2016 DVD release of Welcome Home! The Ultimate Guide for all Newly-Adopted Puppies & Dogs.

The Dog Whisperer book was rated a “classic” by the Whole Dog Journal and his Dog Whisperer Volume One DVD was reviewed as “the best DVD on basic training of pets for the pet owner…” in the APDT newsletter: Chronicle of the Dog.

His programs are unique in that stress management methods for humans are presented as part of the classes. Paul is the founder/director of the children’s after-school, violence prevention program, Paws for Peace. He has practiced and taught yoga in the United States and India for over 40 years.

Paul’s specialty is in the evaluation and behavior modification of aggressive dogs and he is frequently consulted and referred by veterinarians. His public service work includes bite prevention programs for children and monthly dog training seminars at area Humane Societies and shelters. Paul has appeared on numerous radio and television programs, including PBS’s Pets Part of the Family and the nationally syndicated Pet Files. His articles and interviews have appeared in several local and national magazines, including Self, Animal Wellness Magazine, Bark magazine, The Pet Press, The Cleveland Plain Dealer, LA Parent, The Burbank Leader, The Whole Dog Journal, The Yoga Journal, Alaskan Airlines Magazine and many others.

Great, so let’s dig a little deeper into the story – has it been an easy path overall and if not, what were the challenges you’ve had to overcome?
I have the best job in the world. It’s challenging and both personally and professionally rewarding.

I’ve met and learned from some of the top trainers in the world and been able to travel, spreading the message of non-violent training.

I have been blessed to have found that path and traveled it for more than 40 years.

Alright – so let’s talk business. Tell us about Paul Owens Professional Dog Training – what should we know?
I do group and private, in-home sessions. as well as seminars.

Do a lot of work with rescues, shelters and non-profits.

My work runs the gamut from puppies to the elderly, including fearful, reactive dogs, all the way to down-right dangerous dogs.

I still write and do training videos.

Is there a characteristic or quality that you feel is essential to success?
Professional dog training is like any other profession. There are people with personal and professional integrity who know what they’re doing, not only in being able to teach a dog something, but to also be able to teach people how to do it.

These are honed skills, especially in being able to make the subject accessible to a wide range of populations and it’s done over years of practice in the art of active listening. Experience is the key in making everything safe and fun.

Then, there are those just starting out and who are gaining more and more experience as they go along, to those who specialize, to those who are con artists. I tell people, if what a teacher is saying or doing makes you feel uncomfortable, especially in how your dog is being treated, leave the class and find another teacher.

After 40 years, I’m still learning which continues to make the whole thing fresh and fun for me.