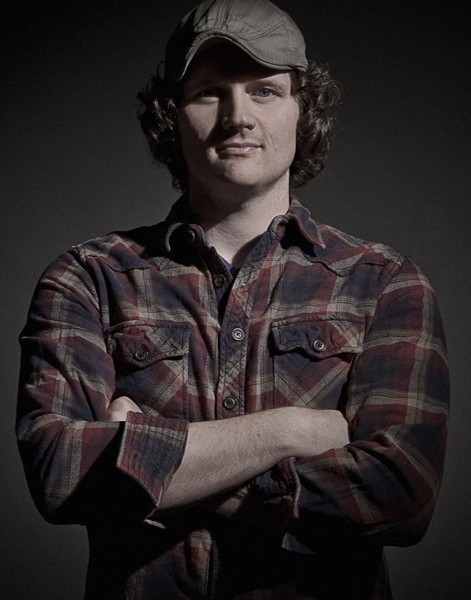 Today we’d like to introduce you to Nate Harrison.

Nate, please share your story with us. How did you get to where you are today?
Stories have always fascinated and enraptured me. For as long as I can remember back in Fort Worth, Texas, I was creating tales and corralling my older brother and younger sister to help me act them out. One year–I couldn’t have been older than seven or eight–my grandfather visited and brought with him an old school VHS camcorder. My life was changed forever. For the first time, I realized you could capture stories and KEEP them. Freeze a moment in time. On this simple tape, you could make imaginary worlds last.

But something happened. I was a youth at this point looking at what to pursue as a career, having a conversation with an adult I trusted. I told them of my love for film and photography. I’ll never forget their response. “You can’t make a career of that. You’ll just be a starving artist. Get a degree in something you can make money.” So I did.

Fast forward to my mid-twenties. I had earned a business degree, didn’t love it, so I started working with youth as a pastor, something I did enjoy. The longer I worked with kids and young adults, I realized the best part of my job was hearing about their lives and telling their stories through film and photography. I grew more and more restless. The itch to capture and tell stories continued to grow.

I was married while in Nashville, and one day, while spilling my thoughts, hopes, and fears to my wife, she just said, “Let’s just go for it. There’s nothing stopping us from moving to LA and pursuing what we love.” So we did. I applied to USC’s School of Cinematic Arts for an MFA. I didn’t think I really had a shot to get in, but I knew USC was at the top of the list for film schools, and as long as I was shooting for the stars, why not try for the top. We dropped everything and moved to Los Angeles. Luckily, a few months after moving here, I found out that I had been accepted. So, I began my journey of practical training.

While in school, I fell in love with a new (at least to me) concept of Transmedia–telling stories in the same world using multiple formats (photography, film, writing, etc.). I started toying and experimenting with photography more and more, trying to capture a complete story in just one moment. I played and operated with the idea that one moment captured in time is all you need to tell a person’s story. Now, when I photograph, I intentionally walk my subjects through a process, directing them to the moment that allows viewers to see who they are, and the story they have to tell.

Has it been a smooth road?
I think anything you absolutely love will be tested and refined with obstacles and challenges. As I’ve already said, it took me many years and miles to realize that I love telling stories through photography. There are plenty of tales to tell, but one in particular that solidified my desire to make lasting, unique images comes to mind.

I was newly graduated from USC, and just began my career as a photographer and filmmaker. Jobs were starting to come my way, and I was saying yes to every one of them, regardless of what they were or the amount of time they took.

Then, my wife, Ryn, noticed a freckle on my neck. It was exactly at her eye line. She said she thought it had grown in size. I laughed and told her she was imagining things. I kept on plugging away. A year later, and after many similar conversations with Ryn, I finally went to have the mole checked out. I received a call from my doctor. She said I had melanoma cancer and needed to be rushed into surgery immediately. The melanoma was nearly at my lymph nodes and once it hit those would spread to the rest of my body, then there would be no stopping it. So, I went to surgery the next day. They sliced up a large portion of my neck to remove cancer and were successful.

Recovery was not so much fun. My neck was wrapped, I couldn’t turn my head, and I was in pain. I felt so useless. But sitting all day, everyday, while I recovered forced me to think–to reflect. In my mind, I had come face to face with death. I kept thinking about what mattered and would have been left if I had indeed died. Again, I came back to and sat with the thoughts of images in my head. I came to the conclusion that stories are what mattered. People and connection are what mattered. From that point forward, no matter what type of shoot I was on, I wanted it to make a difference somehow. I wanted it to tell a genuine story. I became more selective about what jobs I took, and carefully crafted the shoots I was on. I’m 100% healthy now, but I’m so thankful and changed from the season of struggle that I went through. I approach every shoot with a completely different mindset.

So, what should we be on the lookout for, what’s next in store for you?
Currently, in my own personal creative work, I’m in the process of creating a fantasy transmedia world (ala Tolkein, Robin Hobb, G.R.R. Martin) that will include photorealistic novels (real, sweeping pictures of landscapes and people (that I’ll photograph) with artistically rendered fantasy kingdoms/settings), traditional novels, web series, and eventually feature films.

Having just finished the Smitten Apple photo series – “Once Bitten, Forever Smitten”, I’m in the planning phase for another series. I’d like to do something just as surreal, but a little edgier with a social justice slant.

One job in particular that I’m excited about is to create a photo series for Listen Los Angeles. The event is an evening of art and reflection around #BLACKLIVESMATTER.

Last, something that might create big changes is that for the first time, I’m starting the process to look for representation. So, fingers crossed!

Let’s explore some of the challenges you’ve faced along the way. What was the most difficult part of your career so far?
I’m a creative person, and as with many creative people, I like to do many things. My focus can be pulled every way possible. As I said previously, when I graduated with my MFA, I took on any and every job regardless of what it was, the time it took, or the sacrifices it required to do–even for jobs I had no interest in. I had no focus or direction in my photography. I was a weed tossed in the wind. But all of a sudden, I found myself lying on a surgery table, a bright surgical light above me, alone in the room. It was moments before a surgeon would enter and cut deep into my neck to remove cancer that was spreading to my lymph nodes. For the first time, in that solitary moment, something clicked in my brain. I realized life was not limitless. I wish I had a photo of that moment. One single frame could have told the story of where I was, and what was about to happen.

The ensuing months of recovery time forced me to STOP and think. To reflect on who I was, what I was good at, and most importantly, what I enjoyed. As hard as it was creatively not to work, coming out of the forced rest gave me direction, something that is vital in an artist’s work. I knew I wanted to tell stories through photography and film. I knew I loved working with people. I knew moments of life could be frozen in time, and entire stories taken from those moments. In the end, I came back to the realization I had as a child, I wanted to be a visual storyteller.

What about “Wow-moments” – any moments that stick out? Any moments when you felt like you had made it?
I still don’t think of myself as having “made” it yet, but recently, had the opportunity to collaborate with a company called Smitten Apple. They were preparing to launch their apples nationwide and came to me for help with the photo series. After discussion and planning, I had the opportunity to put together ideas and a team of people to make the concept I pitched a reality. So, shortly after, I was standing in a picturesque golden field, camera in hand, waiting for the next subject to arrive and thought to myself–I’m getting paid to do what I love and create art. I call that a big win.

Image Credit: My personal photo was photographed by Andrew Jeric.