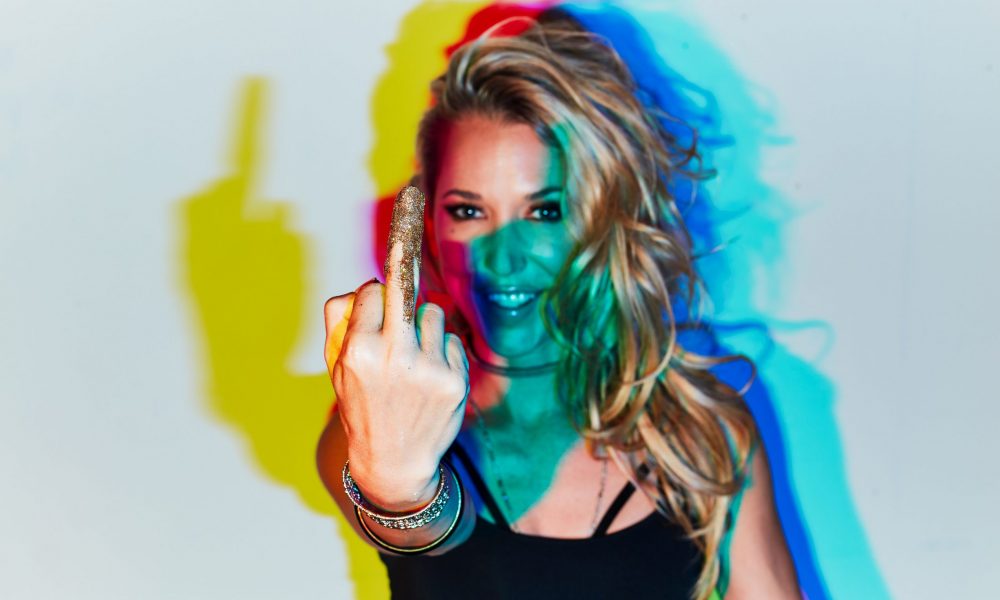 Padhia, let’s start with your story. We’d love to hear how you got started and how the journey has been so far.
I moved to LA a few years ago to go back to school for 3d Special Effects and “get a real job” and laughably build some stability for myself. I also had a secret blog that I was really ashamed of at the time, which was about deeper truths of the human experience. It started getting a lot of traction, as it created a great sense of hope for anyone who read it because it talked about my beliefs about topics such as depression. I feel that the most depowering thing one could ever do in life is accepting that they are mentally ill and live a life reliant on meds. I believe that depression is a part of the human experience, we all experience it to varying degrees, as it is the intersection between how you have been conditioned, programmed, old pain that you are carrying and where it intersects with the greater vision of your soul’s existence.

The greater that gap, the greater the depression. People began reaching out to me from all over the world and asking me to coach them. I created a Journey to Freedom and began to witness miracles. People who had been suicidal for years, struggled with cutting, eating disorders, people that had been seeing psychiatrists for years and were at the end of what they could endure, all came back into the light. I began to realize that because of all I had come through in my struggles with PTSD and the anxiety and depression that stemmed from that gave me a deep understanding of our entire human operating system and what exactly needed to be done to get it into a state where it was not only any longer collapsing – but actually producing joy.

It was around this time that I discovered and fell madly in love with street art. I began to realize what a magical way it is to spread hope and messages about the possibility of freedom and happiness. And, I also had the growing sentiment that it would be tragic for me to end up in a job that anyone could learn to do when I had all this highly specialized experience and unconventional wisdom. And so I began to do it.

I was scared, clueless, and pretty sure I was losing my mind. I did it anyway.

Just a few short years later, I have a studio in Downtown LA and am honored to be selling to collectors worldwide. I have also built an apparel line out of many of my thought initiatives. Most recently, I have also signed a licensing deal in Japan to build a street wear brand, and have also signed with a vintage denim brand here in the US which is getting set to relaunch summer 2018.

Overall, has it been relatively smooth? If not, what were some of the struggles along the way?
The road has been smooth in the sense that people have consistently really responded to everything I am creating. That is a tremendous treasure and helps me keep going.

It is a difficult path, however. There is no clear route. I am always guessing and readjusting. There is no structure or plan. There is no financial guarantee and everything I am doing has involved tremendous financial investment and sacrifice. But I can endure all of that to live a life with no ceiling.

The other reason it becomes difficult for me sometimes is that I still struggle with complex PTSD and although I am better than I have ever been, there is a lot to manage with that. I am grateful for Serenity Treatment center in the Palisades and all the research and new healing modalities that finally exist.

Alright – so let’s talk business. Tell us about PADHIA (unfukyourself) – what should we know?
I am a Los Angeles-based street artist, fashion designer, and writer. My work can best be described as psychological commentary. Where most other street artists pull from external themes such as politics, pop culture, and social commentary, my work explores the often undiscovered and obscure aspects of our interior human landscape.

I am the originator of several viral movements including Unfuk Yourself: be who you were before all the stuff happened that dimmed your fucking shine, (which you may have noticed everyone is ripping off and writing books and stuff.) And, also the Love Me Anyways thought initiative, which is currently in production as an apparel line both in the US and Japan.

I consider each of my projects to be a Thought Initiative. I take a concept and create large and small street pieces, sidewalk stencils, fine art, prints, apparel, and videos. The idea is that through all these different mediums I discuss the different layers of meaning contained in the piece. This creates a shift to a greater understanding of which ever aspect of the human experience addressed by the piece. The result is moments of expansion, a release a pattern of suffering.

Any shoutouts? Who else deserves credit in this story – who has played a meaningful role?
First, I have to thank my best friend Clifford Fick who has been a rock to cling to in a home planetless life for decades.

I’d also have to thank Plastic Jesus who I actually met at Crossfit Hollywood in his former life as a photojournalist. He randomly decided one day to become a street artist and getting to witness all that he has achieved in such a short amount of time has been awe-inspiring, During a tough point in my life, he offered to share his studio with me. I am grateful to him every day for all that he has contributed to my life.

Thrashbird has been a big influence on me, his crazy billboard antics and giant bold pieces have been a big part of my inspiration to keep challenging myself to greater heights.

I’m also grateful to Wrdsmth for his never-ending support and encouragement. It has also been a great source of inspiration watching him rise.

And most importantly, I also need to acknowledge the people who reach out for murals, brand collaborations, to collect my art or just with kind words. 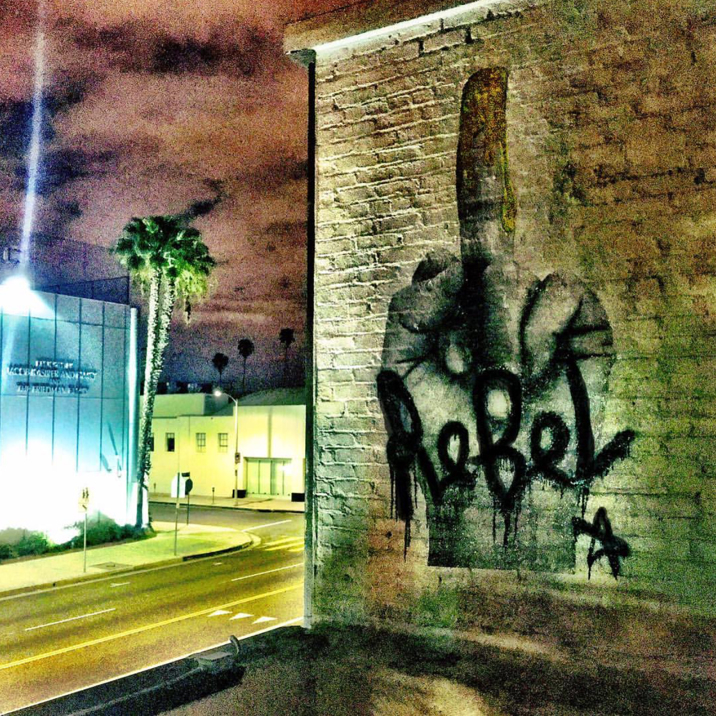 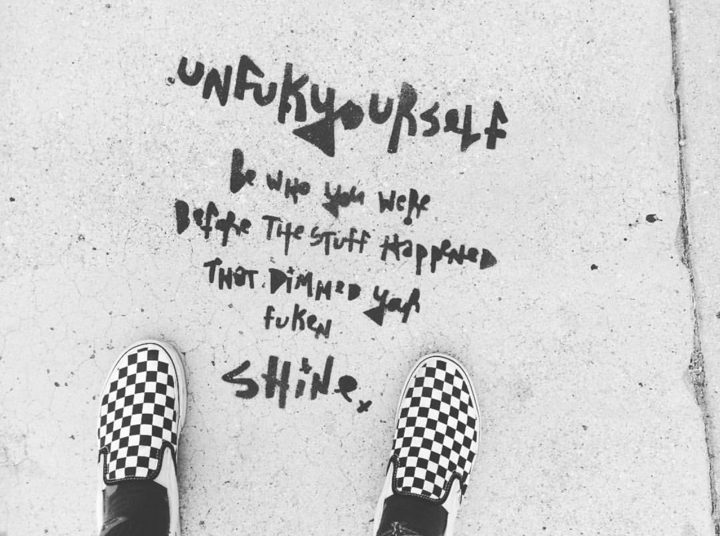 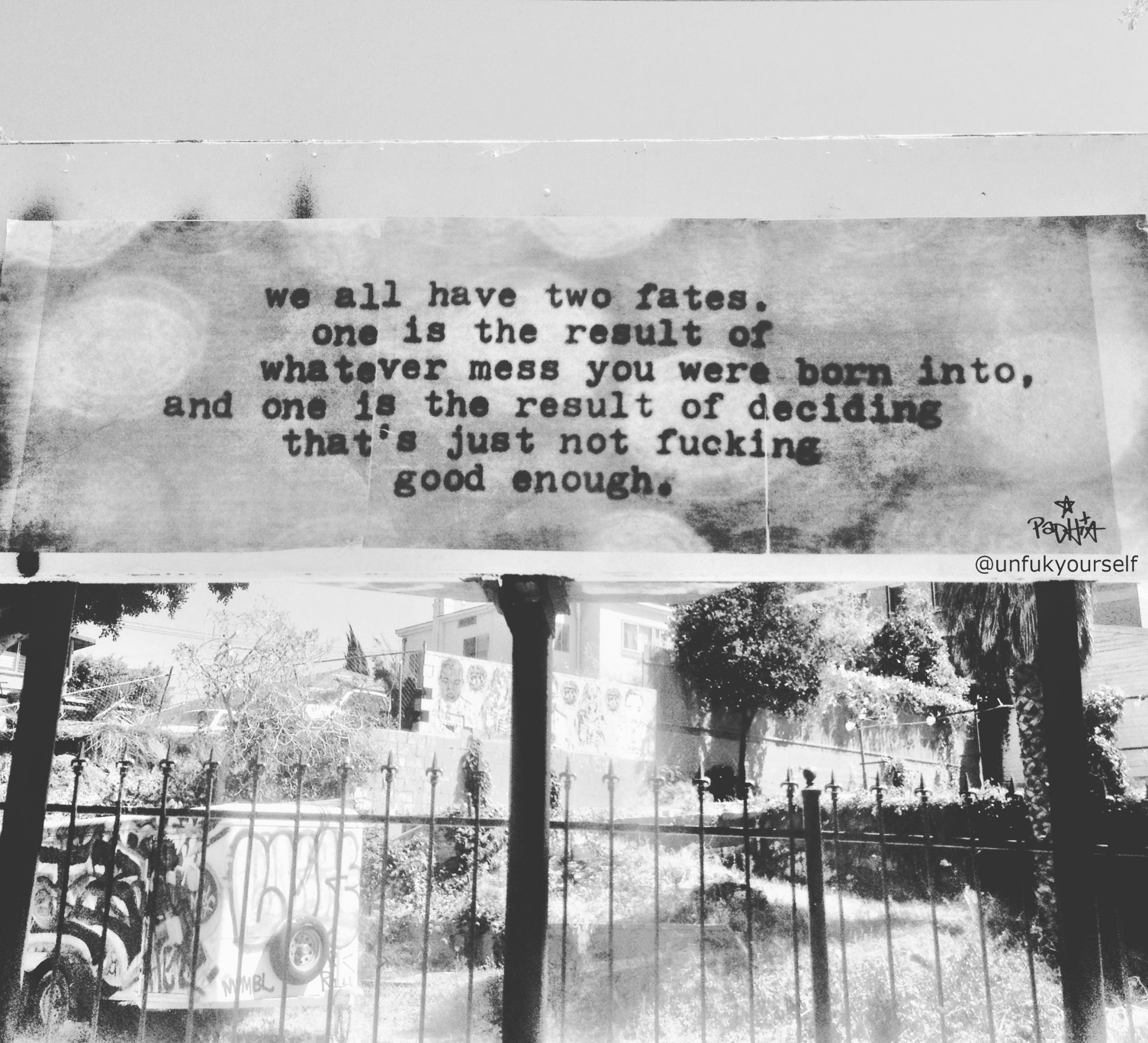 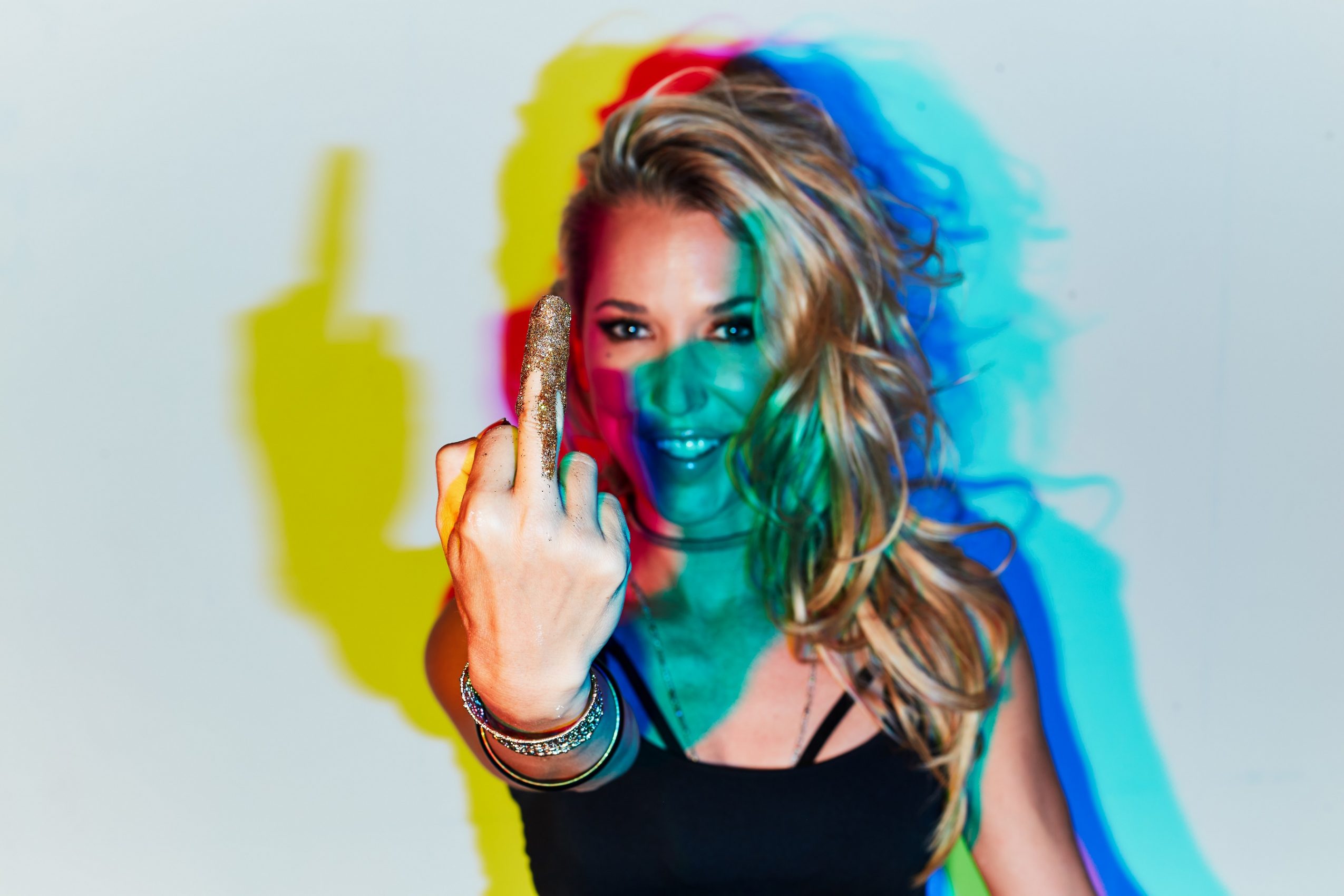 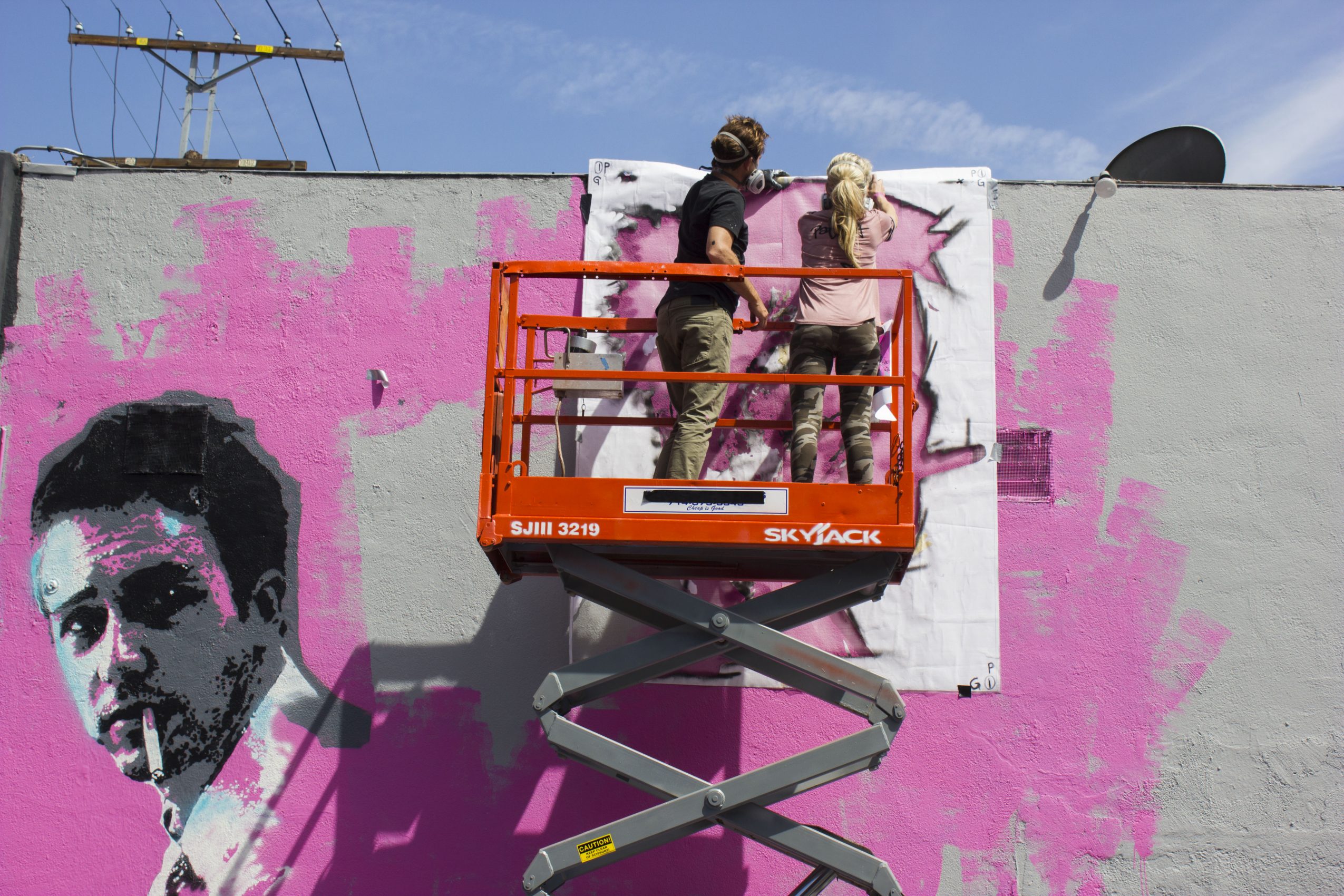 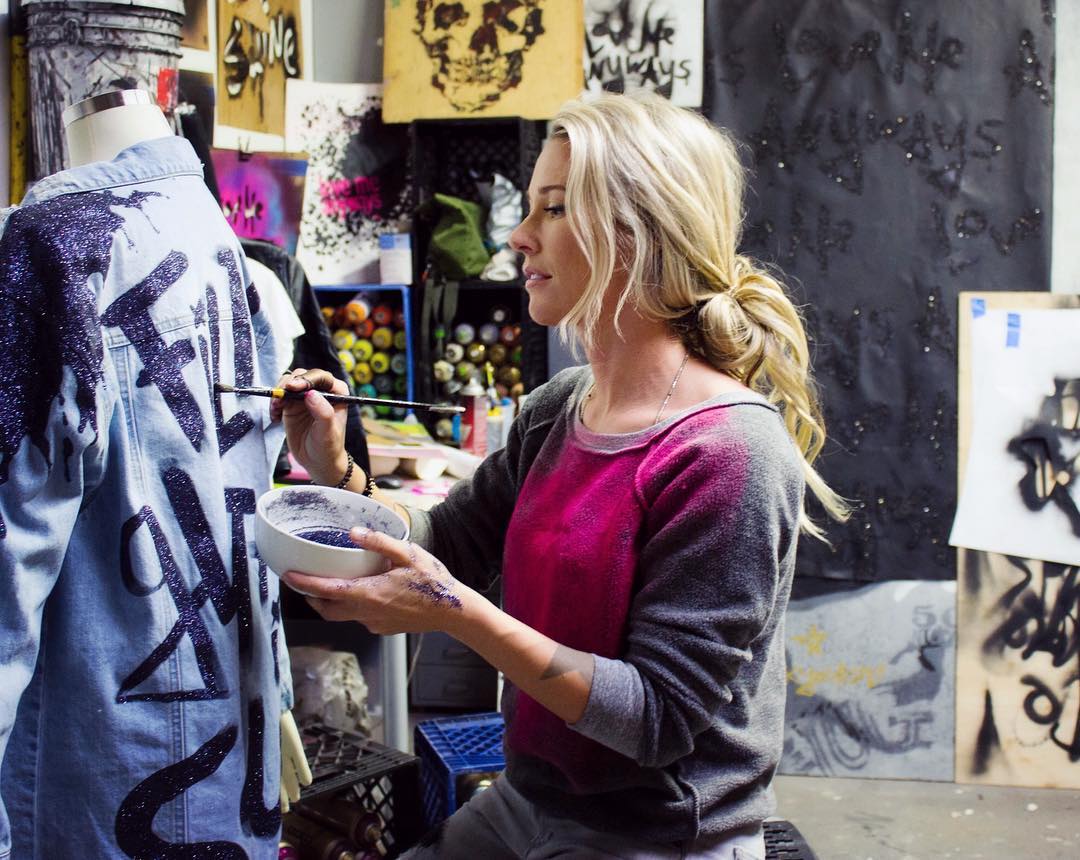 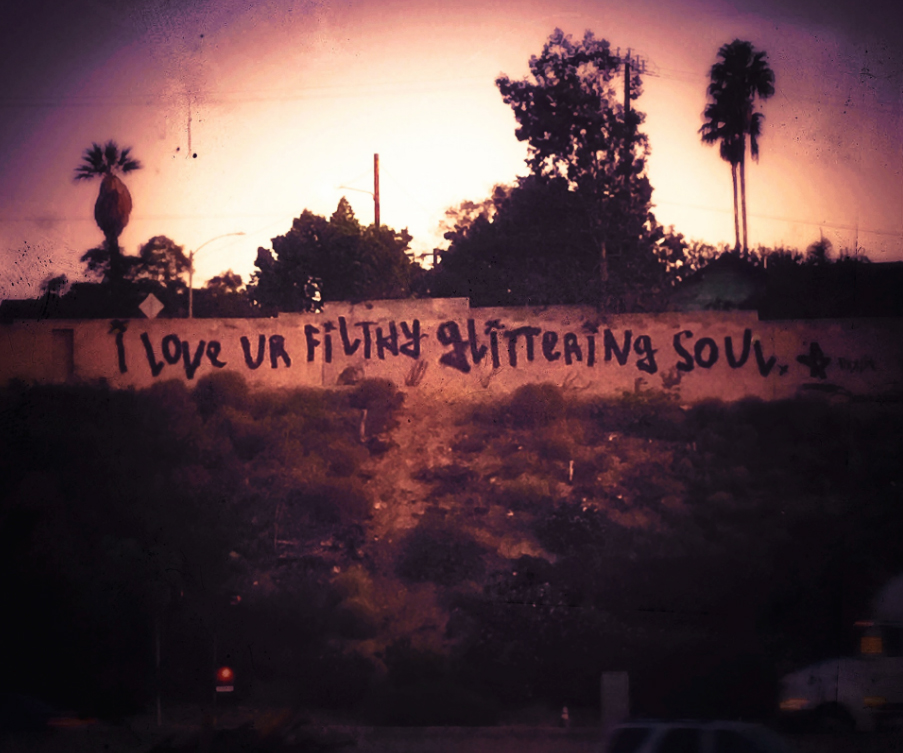 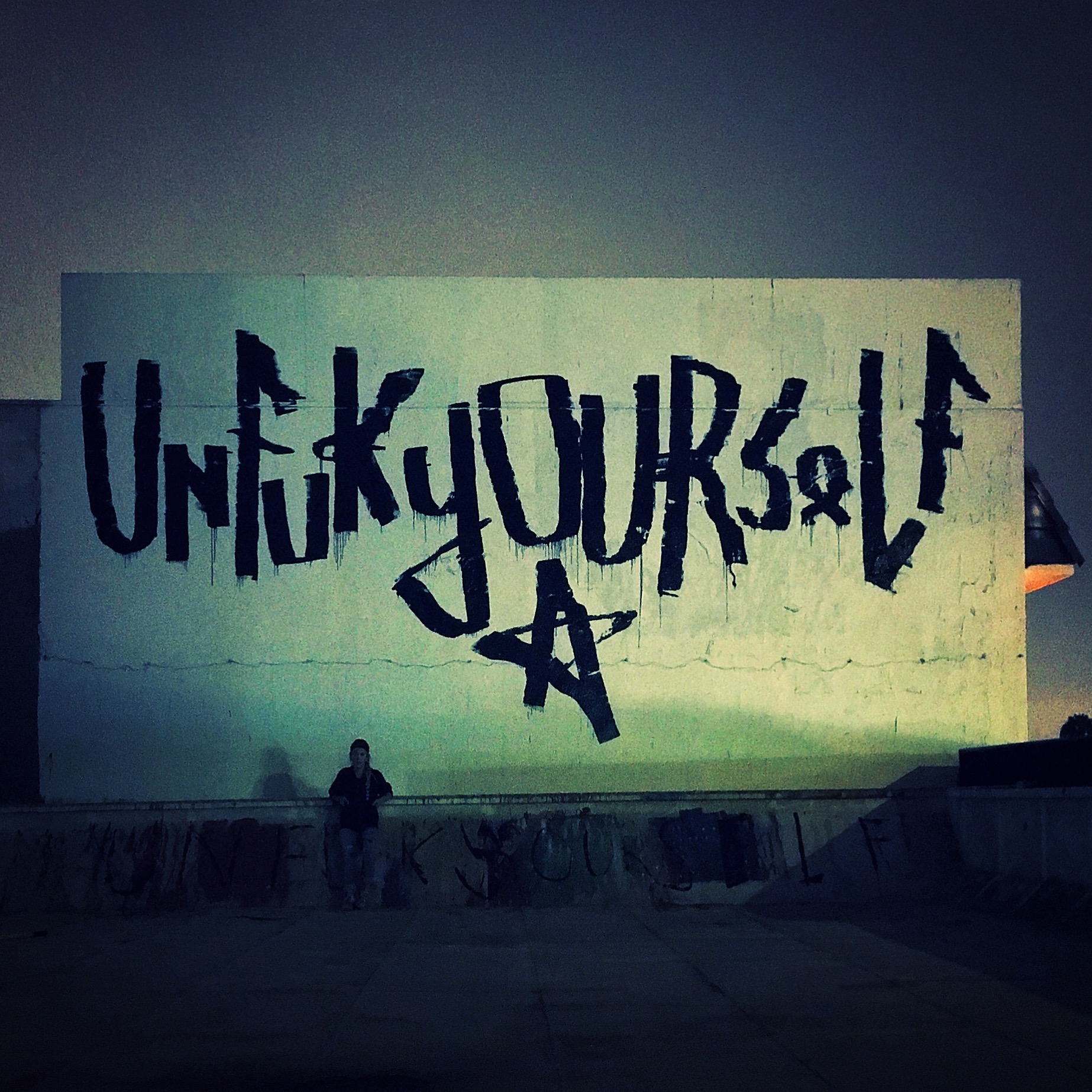 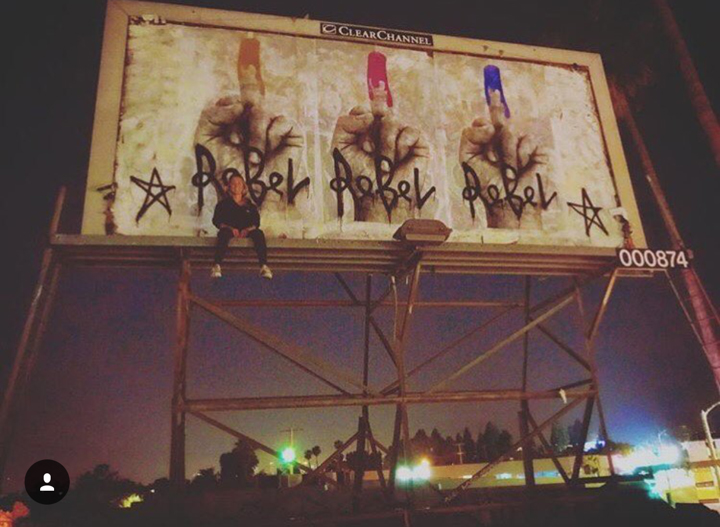 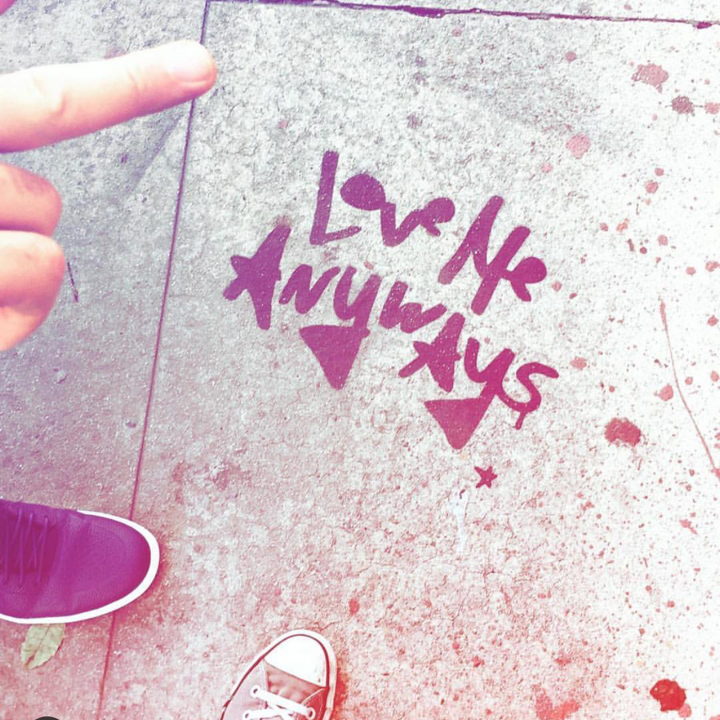