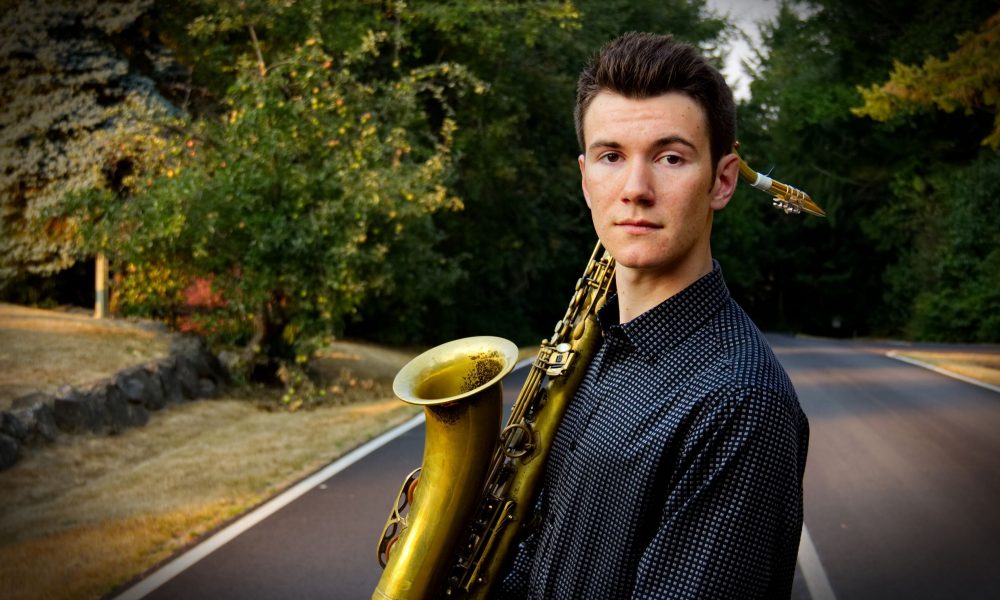 Today we’d like to introduce you to Nick Stahl.

Nick, please share your story with us. How did you get to where you are today?
I grew up on an island off of Seattle, called Bainbridge Island. There was always lots of music being played or being listened to in my house, which was always a special thing for me. I was especially drawn to the saxophone solos on a couple Glenn Miller Orchestra albums we had, so when the time came to choose an instrument in 5th-grade band, I chose the saxophone.

I eventually started taking private lessons studying jazz and classical and was hooked. The more I developed as a musician, the more captivated I became with the expressive and emotional possibilities of music. I’m not sure that there was ever a singular moment where I decided that I wanted to become a professional musician, it just naturally became the obvious path for me.

In 2015 I came to Los Angeles to pursue an undergraduate degree in jazz at the California Institute of the Arts. I really lucked out and found a one of a kind community of musicians and teachers, who have become like family to me. It has provided me with a number of valuable connections and opportunities, which have already taken me to a variety of places, including Chicago for the jazz program at Ravinia’s Steans Music Institute, Italy to perform in a concert put on by the Global Music Education League, and Capitol Records to record on the past three CalArts Jazz CDs, with the latest featuring one of my own compositions. I just graduated this past spring with a Bachelor of Fine Arts in jazz reeds and a Minor in music theory. I’m staying in the Los Angeles area, working as a professional saxophonist, performing, recording, composing, and teaching.

Great, so let’s dig a little deeper into the story – has it been an easy path overall and if not, what were the challenges you’ve had to overcome?
It hasn’t necessarily been a smooth road, but the struggles I have faced have largely been those generally expected by artists. I am incredibly privileged to have an endlessly supportive group of family and friends, which makes all the difference in the world. Music has presented constant challenges for me, but in some ways that was part of the appeal, there’s always something to work towards. I am very critical of myself and am almost never happy with my playing, which pushes me forward but also tends to needlessly make things more difficult.

When I first got to CalArts, I quickly realized that I had some significant deficits that I needed to address. Fours years later, I’ve made immense progress, and have a whole new set of goals. For me, these kinds of artistic or creative struggles usually serve as a means to become a better musician. Now that I’m out of the safety of school, however, I’m facing more life struggles, namely the challenge of finding steady work while attempting to not sacrifice one’s art.

Tell us more about your work.
I am primarily a tenor saxophonist who performs, records, composes, and teaches, mostly in the genres of jazz and improvised music, as well as rock, pop, and folk. I play soprano, alto, flute, and clarinet as well. There is a lot of other music I love that I have some experience with, and am continuing to learn, including Brazilian, Balkan, Persian, salsa, and Scottish music.

I place a lot of value on one’s sound/tone on the saxophone, so I work a lot on that, striving for pureness, warmth, and balance. I’m also focusing right now on creating a narrative while improvising, trying to have everything I play come from something and be developed. As a composer, I do my best to just follow my ears and not force anything to fit into a specific meter or form or theory, which often has unique results.

What moment in your career do you look back most fondly on?
I’d have to say this past June when I was invited to Treiste, Italy, to play a concert at the end of a conference put on by the Global Music Education League at the Tartini Conservatory. I was part of a jazz octet of international musicians that showcased a groundbreaking low latency audio/video technology called LOLA, which allows people to perform together from incredible distances without any perceptible delay. For the concert, we used LOLA to connect and play with a clarinetist in Vienna, Austria, 300 miles away. 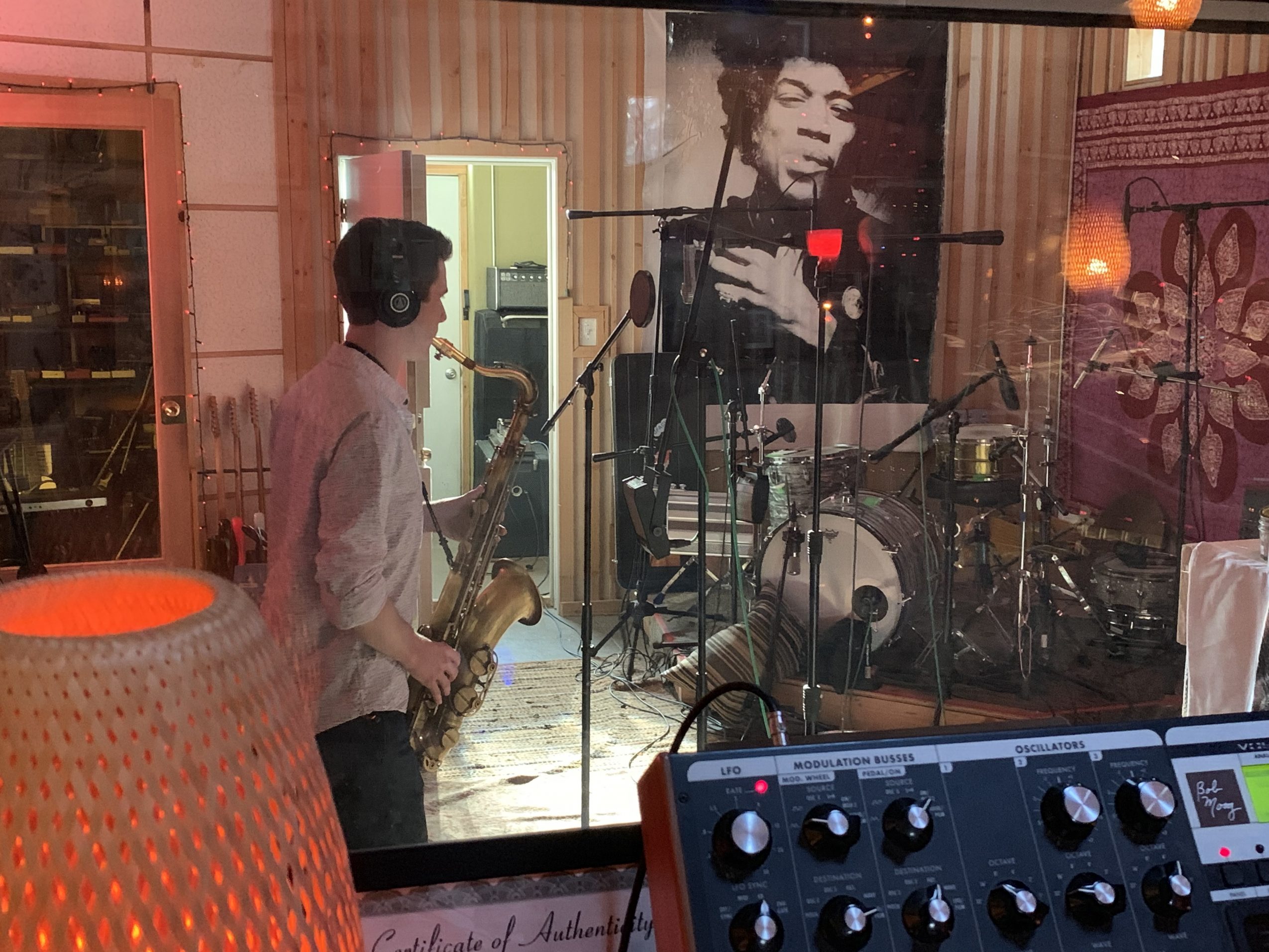 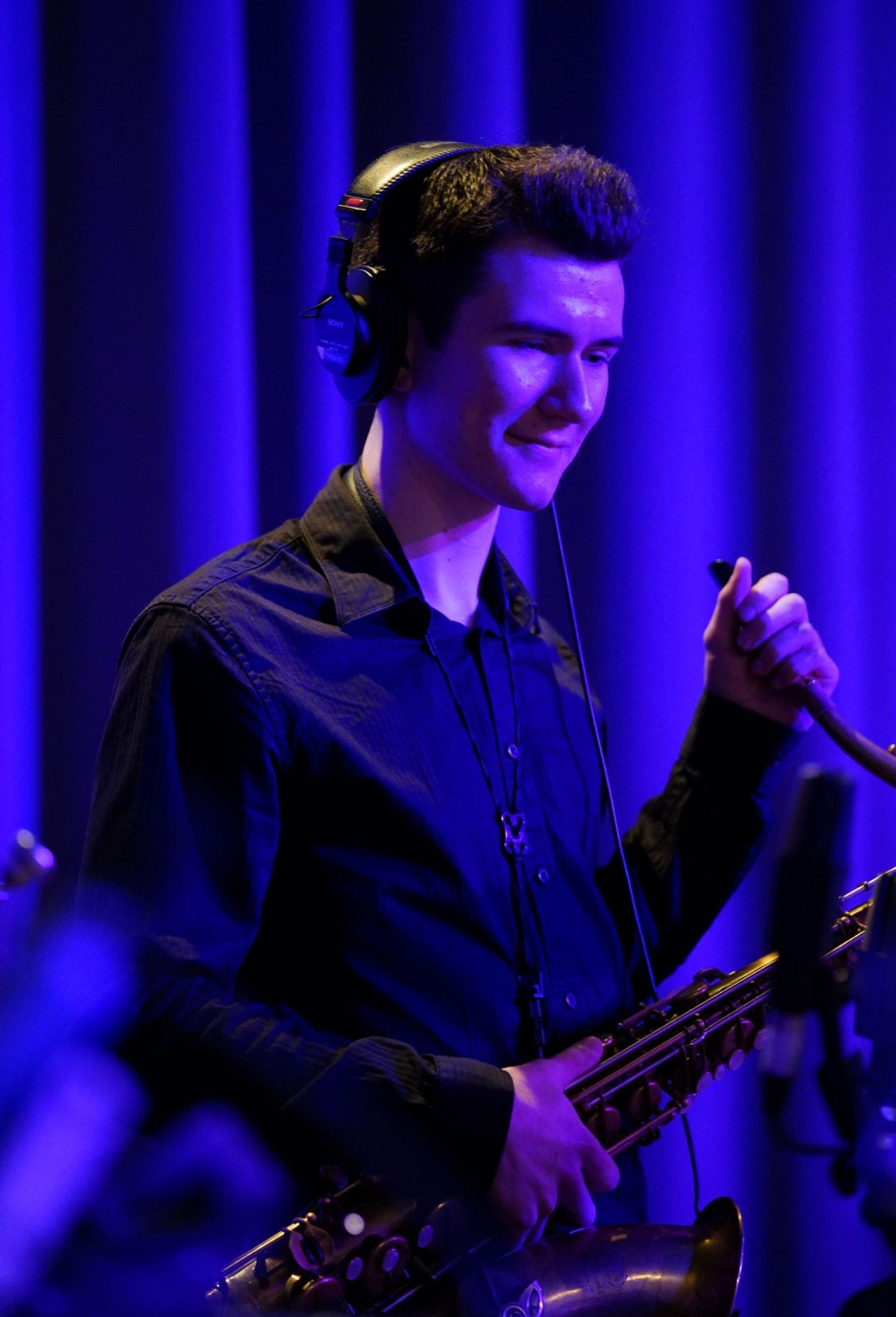 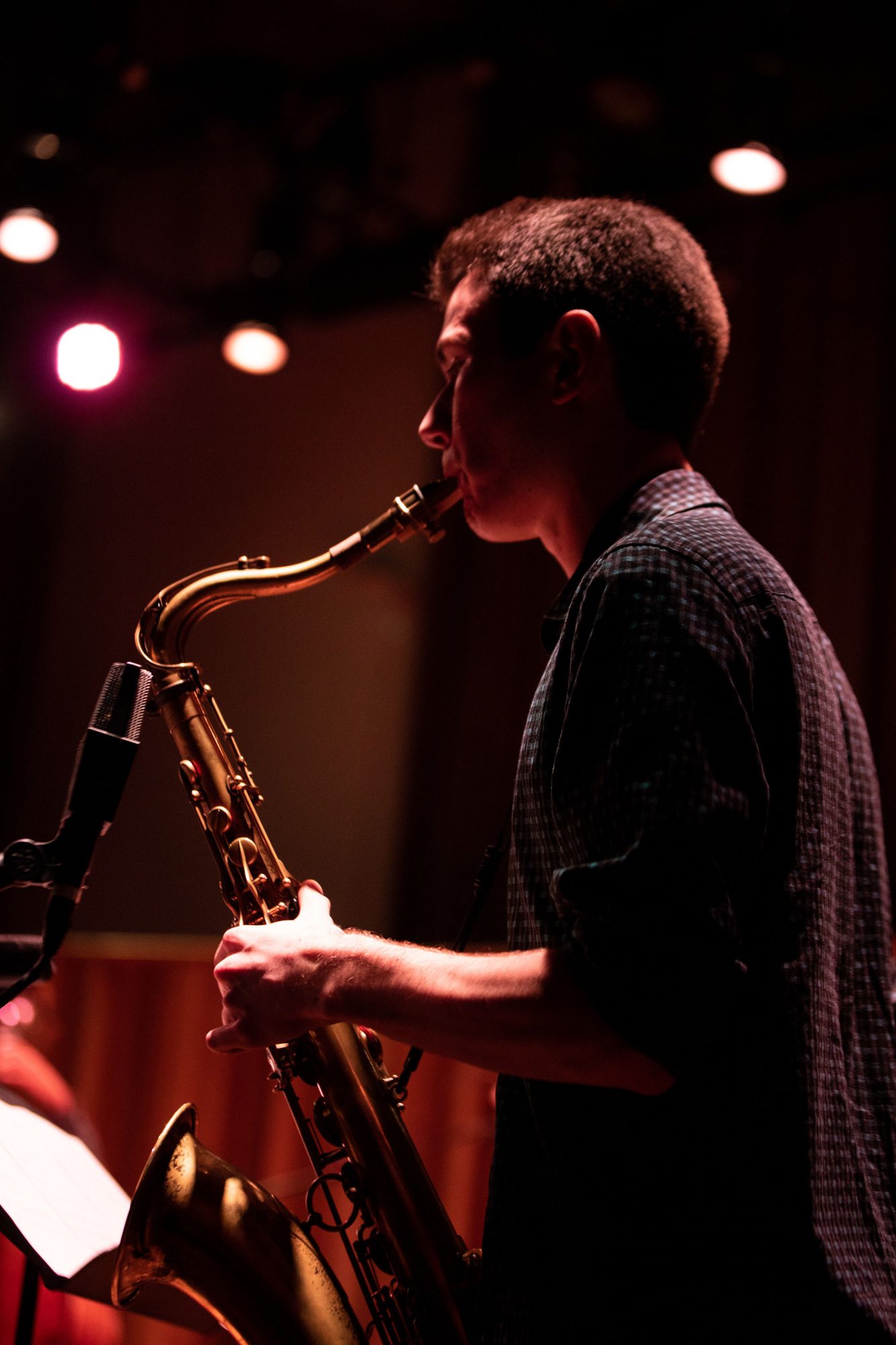 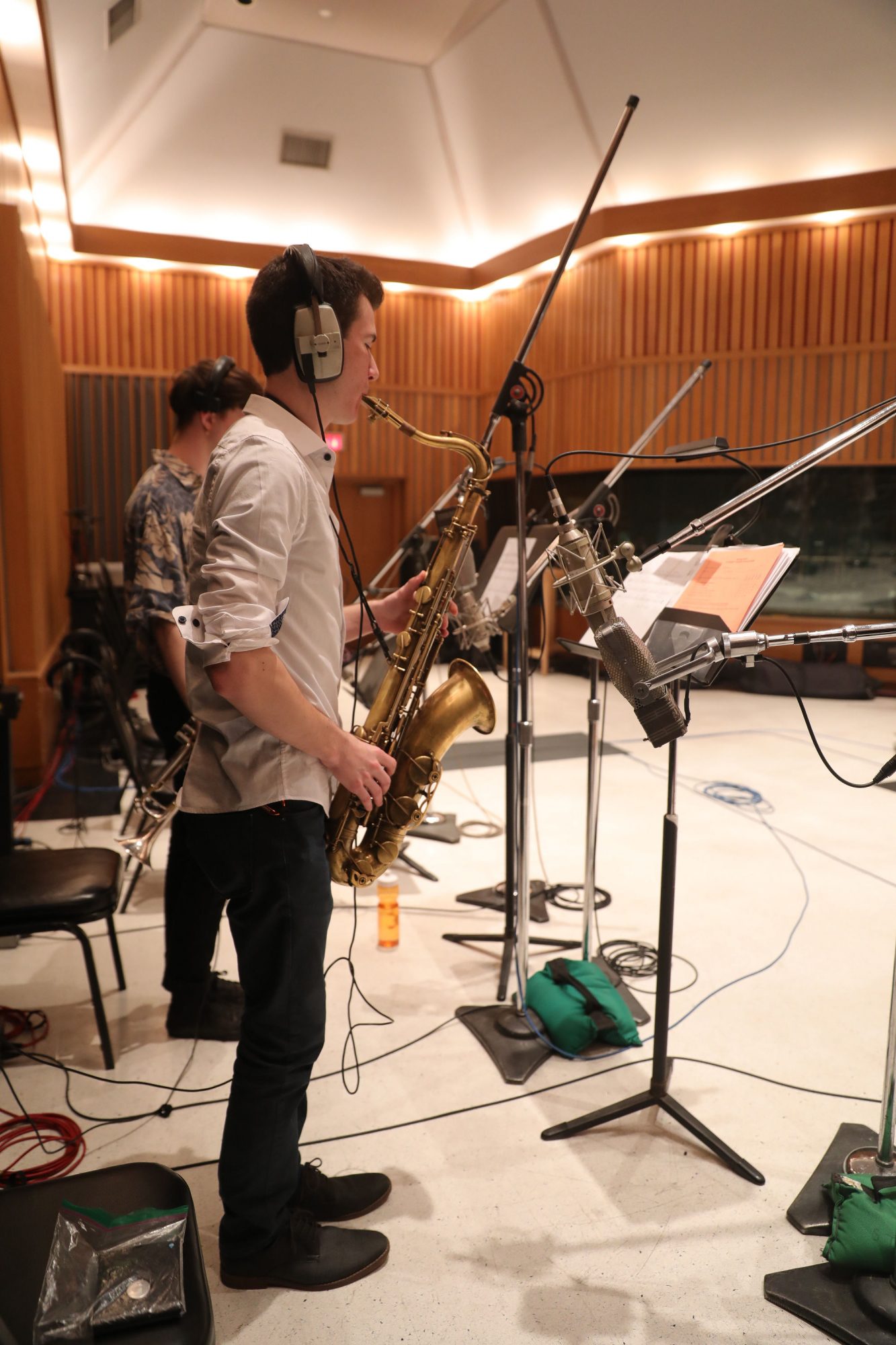