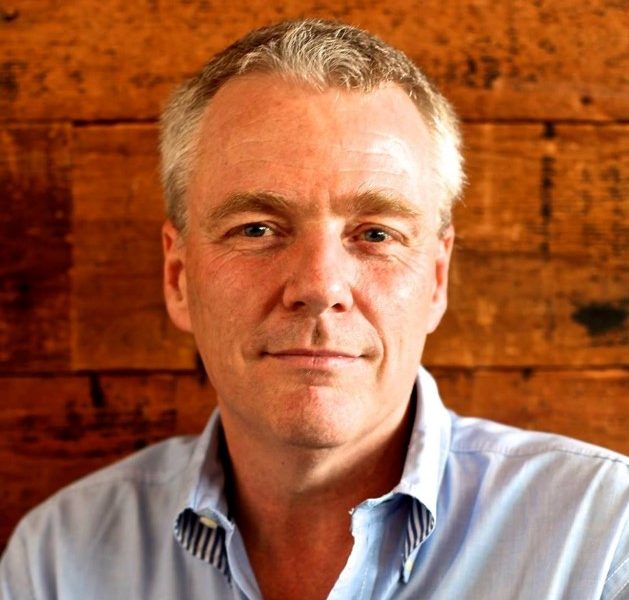 Today we’d like to introduce you to Nick Bishop.

Nick, let’s start with your story. We’d love to hear how you got started and how the journey has been so far.
My background is I failed high school. I became a Jackaroo (cowboy), in Western Australia then worked in a uranium mine as a driller’s offsider near Jabiru in Australia’s Northern Territory, then returned to my home in Adelaide, South Australia to matriculate (pass high school).

I knew I didn’t want to go to college (uni). I liked money. I wanted to work. I started working in advertising in Adelaide – the same week that John Lennon was killed.

This resulted in a 30+ year career as an international marketing guy having had numerous senior leadership roles at advertising agencies including Y&R, McCann-Erickson, Grey and DDB in my native Australia (Adelaide & Sydney (twice), then on to New York (twice), Los Angeles, San Francisco, Amsterdam, London & Madrid. I also worked client side at The Coca-Cola Company in Atlanta, where as VP, Consumer Connections. In that role, I led brand management for Coke, Diet Coke, Sprite & Schweppes, as well managed all global advertising and all global agency relationships. I was marketing royalty.

I left all that about 5 years ago to become a consultant, entrepreneur and investor.

When I first left Corporate America. I started an Expat car leasing business in LA called Expat Autos that traded modestly in LA for about 2-3 years, helping expats with no credit history/insurance get access to vehicles of any price. Interesting to see “Fair.com” now started by the amazing Scott Painter (of Cars Direct and True Car fame. That is exactly what we were thinking. Scott has the brains, money and experience to make this real. Congrats to him and the FAIR team.

Next, I started a functional accessory business that enabled you to “attach stuff to your phone – and your phone to stuff”, called Jakkz. We did a lot of work out of NY with an amazing designer called Hlynur Atlason, we made prototypes in China. All too hard. Next!

I made a few tech based investments that didn’t work out, and in one of my consulting roles, I have been working for about 6 years to bring Formula 1 to the strip in Las Vegas. On one of my trips to Abu Dhabi for an F1 race, I ate a meat pie. The following weekend, I was in Austin for the F1 race, and I ate another pie.

I got back to LA and said to my partner Geri Chua, that we should open an Aussie Pie shop in West LA.

She didn’t say no.

Overall, has it been relatively smooth? If not, what were some of the struggles along the way?
Our former Australian Prime Minister, Mr. Malcolm Fraser, famously and accurately once said ” Life wasn’t meant to be easy”.

The “normal” challenges in restaurant retail are dealing with the city and the health department to get a store open, finding, training and retaining great staff. Building a brand and sustaining a business in the cluttered Los Angeles restaurant market.

The “self-inflicted / only us” challenges are explaining the story of a reinvented pie AKA “gourmet comfort food” to everyone – Americans, Australians, and everyone else, in a city where it is always “72 & Sunny”, (aka RF hot) and people are soooo calorie / gluten conscious.

This is the toughest city in the USA, possibly the world to sell “heavy” gourmet comfort food.

Despite those challenges, we have built an amazing brand and business, with the greatest gross numbers and highest Yelp scores of 4 and 5 stars of any pie shop in the world.

We have built and maintain a regular and consistent daily and catering client base that includes numerous regular people and a surprisingly high number of celebrities & dignitaries – locally and internationally.

We have developed a cult following with many of LA’s elite foodies.
We have done numerous important events for incredible clients like Heal the Bay, YouTube Studios, Twitter, Tinder, Wag!, The Honest Company, Full screen, Disney, Belkin, Tosh.O, Jerry Bruckheimer, Cartoon Network, Soho House, d&b, We Work amongst others.
We (as an Aussie pie company), are excited to be doing the (most American Holiday of all), Thanksgiving dinner this year at the city’s most important residences. (Can’t tell you where – we’d have to kill you)

Our most popular item is the Tiger Stack. Any pie, stacked on 2 sides with gravy.

We are proud to have created a category called gourmet fast casual – as our pies take 3 days to make, and about 30 seconds to serve.

Later this year we will infuse a range of pies with marijuana and own the URL’s potpie.co and potpie.us.

We just started to ship pies nationally in USA via Gold Bely and were the first Aussie pies sold at a US football match (UCLA Coliseum games).

We have started a wholesale business in February, supplying pies, sides, gravy and lamington (dessert) to a number of local restaurants and coffee shops.

We are active looking for partners to expand our footprint across the US – in markets where comfort food is a regular staple. (i.e. NOT So Cal ☺)

BACK STORY
Pies in Australia are a bit like hot dogs – in that they are handheld, cheap, full of questionable ingredients, sold in gas stations and convenience stores, eaten at sporting events, and “drowned” in ketchup.

We enlisted our friend and The Food Network’s “Chopped” Champion Chef, Joe Youkhan, to remake Australia’s “hot dog”. We had him taste what I considered a “great pie”.
“Joe I have been eating pies for over 30 years – and this a great pie!”.
Nick, I have been eating this for 30 seconds and it tastes like shit”
“Joe – it’s a great pie”
“Nick it is shit food”
“Joe make me a pie you want to eat”
“I don’t know how to make a meat pie. I can make a pot pie, an apple pie, an apricot pie…”
“Well you better learn”

So, Joe reinvented the pie from the pastry up.
So we take 3 days to make our pies. We marinate for 24-28 hours on Day 1.
We slow cook for 2-4 hours on Day 2 – then let it rest.
Day three we blind bake the pastry base, add the filling and a croissant top.

We serve it stacked high on sides with gravy.
No handholding here.

Any shoutouts? Who else deserves credit in this story – who has played a meaningful role?
Our staff – everyday in every way. a magnificent crew – front & back.
Our chef, Joe Youkhan – for his brilliance, creativity, solutions-based approach and flexibility
Our customers – for their continual support in our stores, with their repetitive catering, and our new wholesale clients.

Our partners – in lunch, catering, and national delivery
Our social and media partners
Yelp for allowing us to have the highest number of 5 stars of any pie place globally
The Woody Show for creating our catchphrase #howsyapie and sending us thousands of customers
Heal the Bay, for entrusting their 875-person, 3 course Annual Gala to us 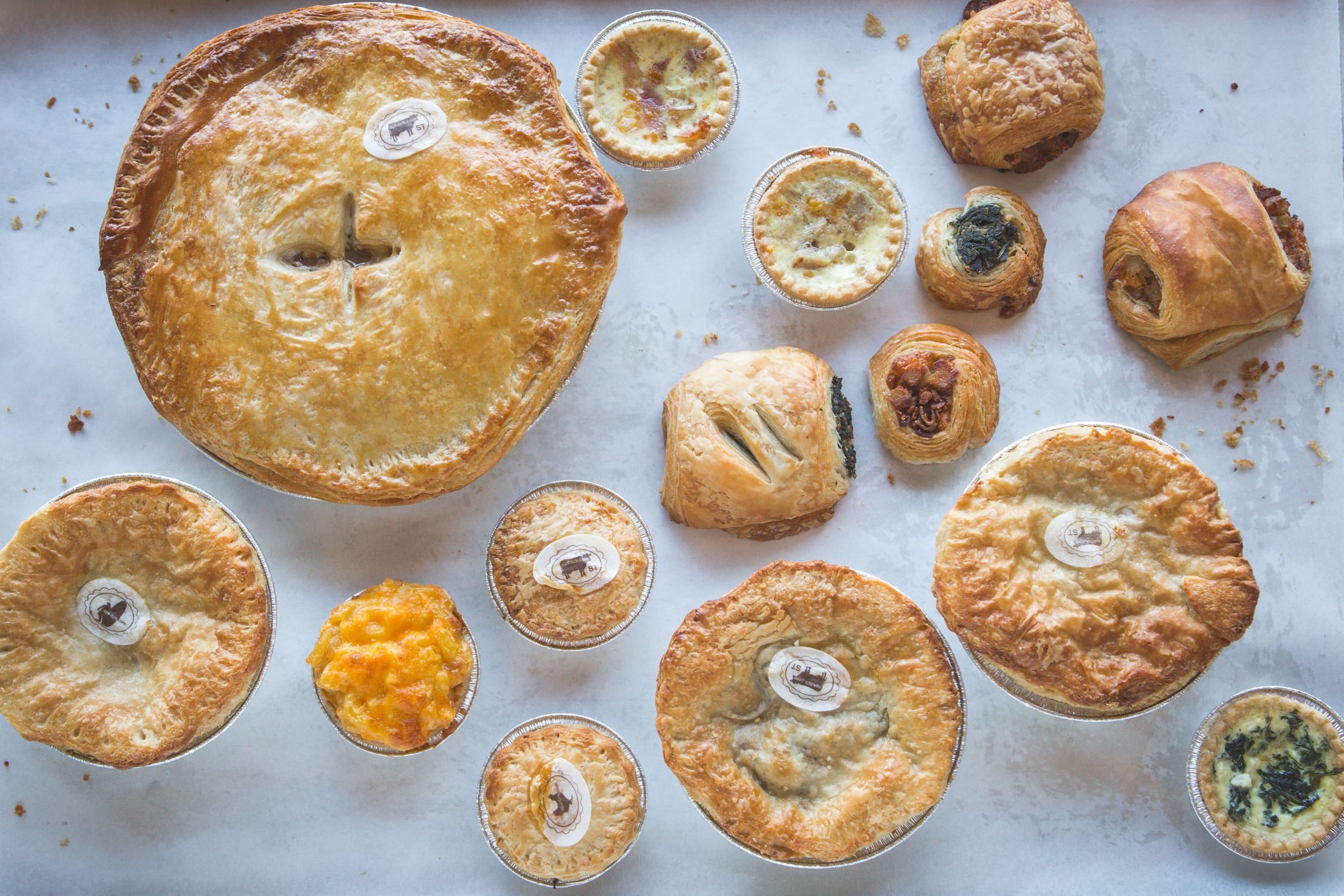 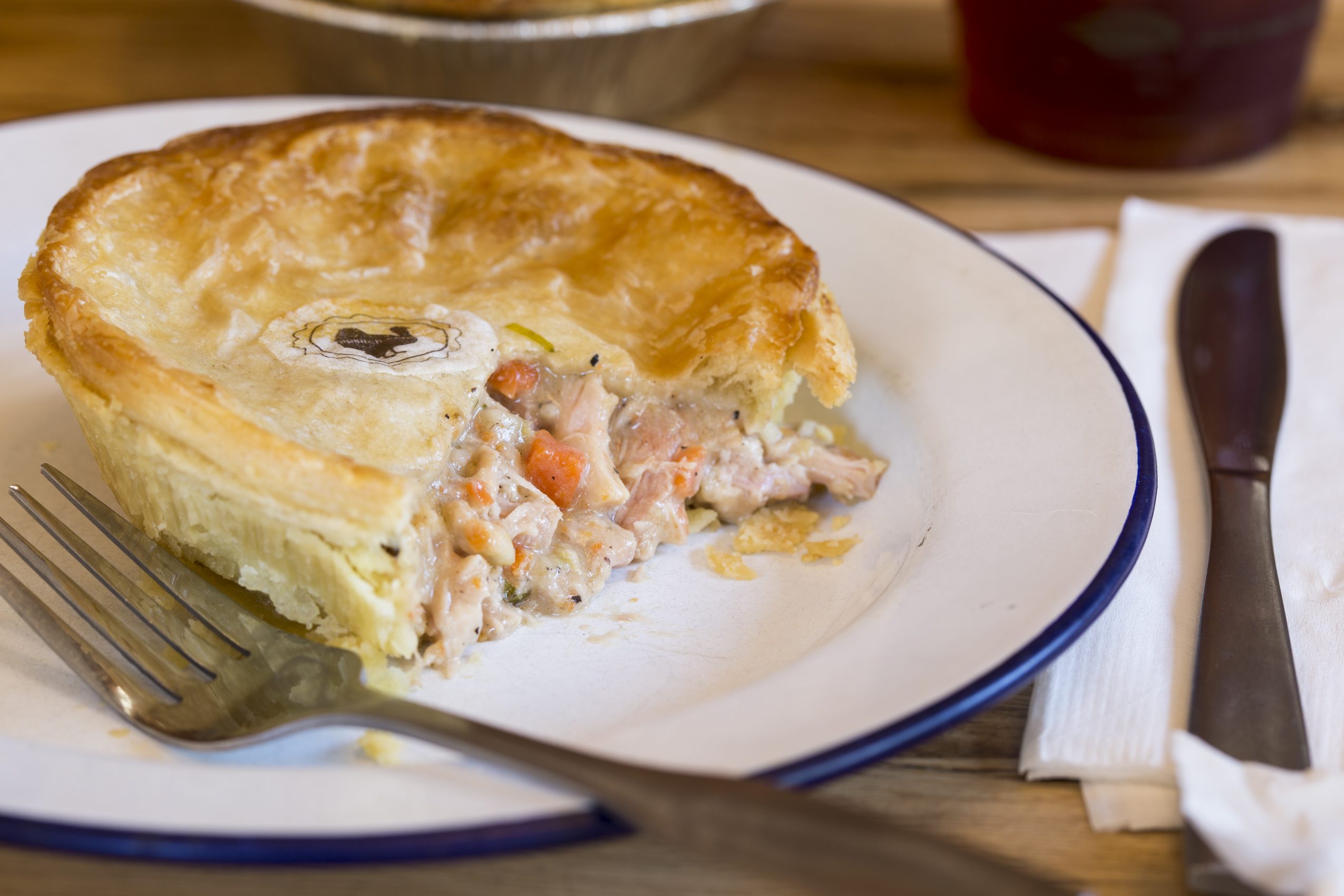 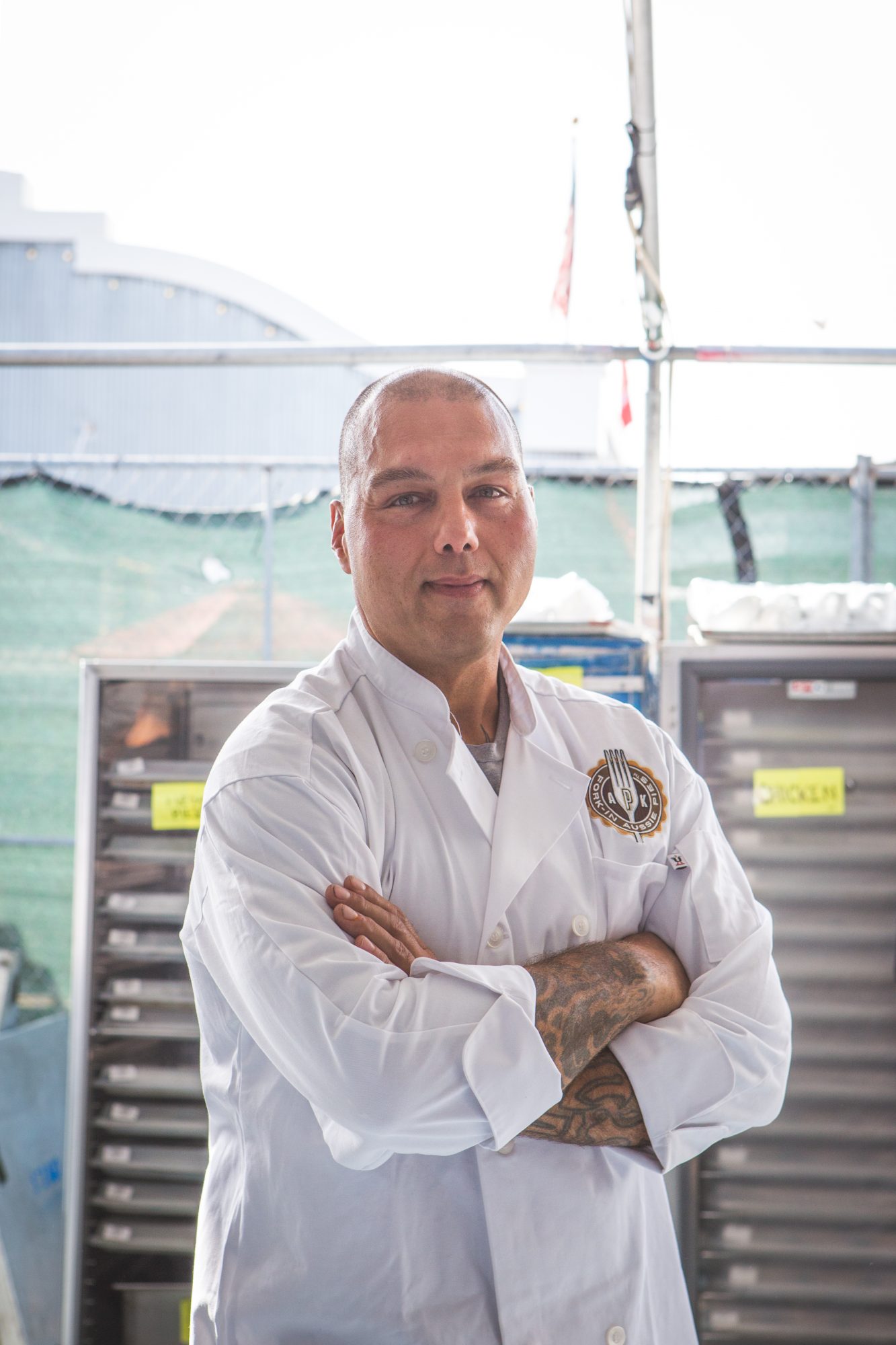 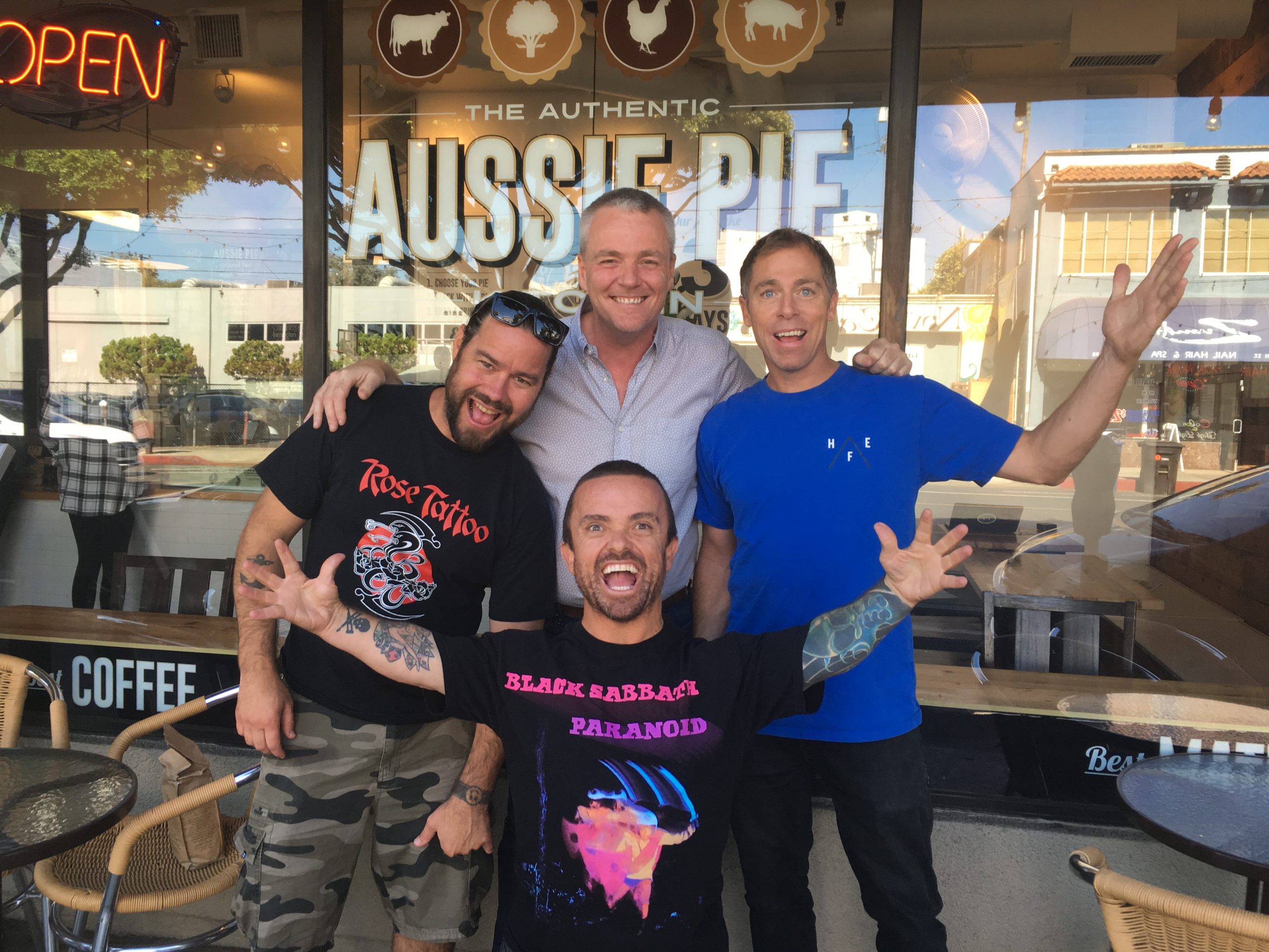 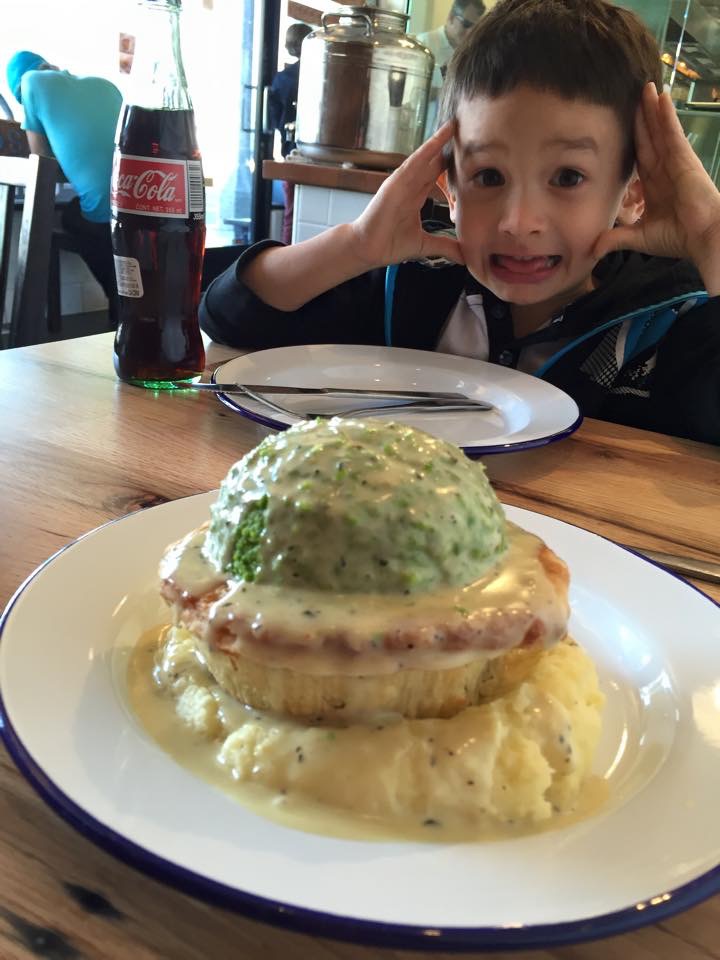 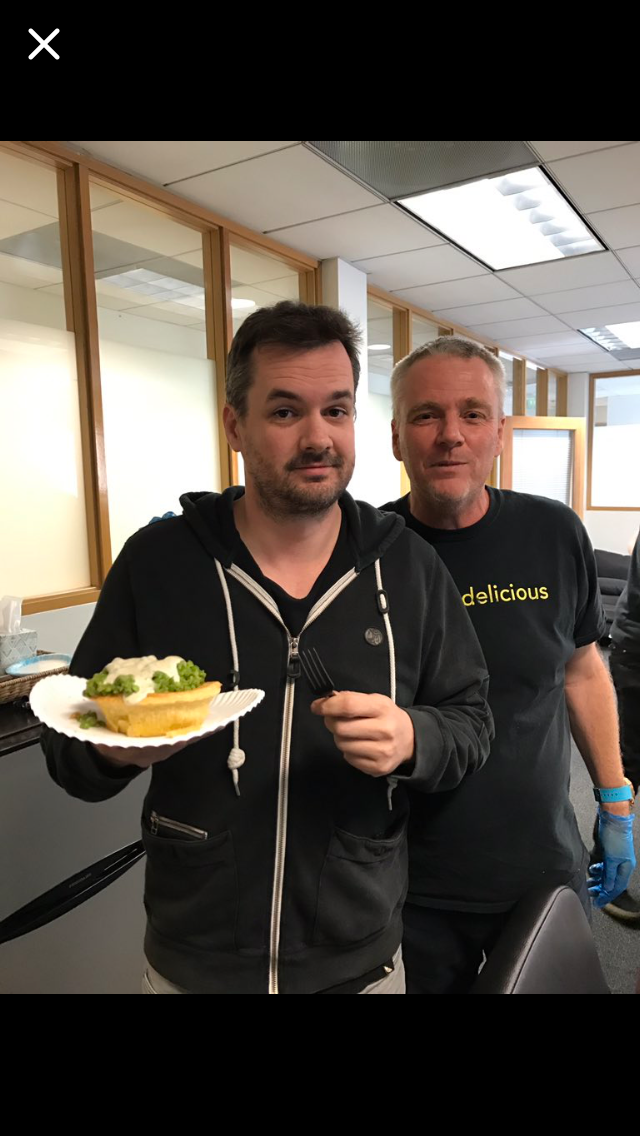 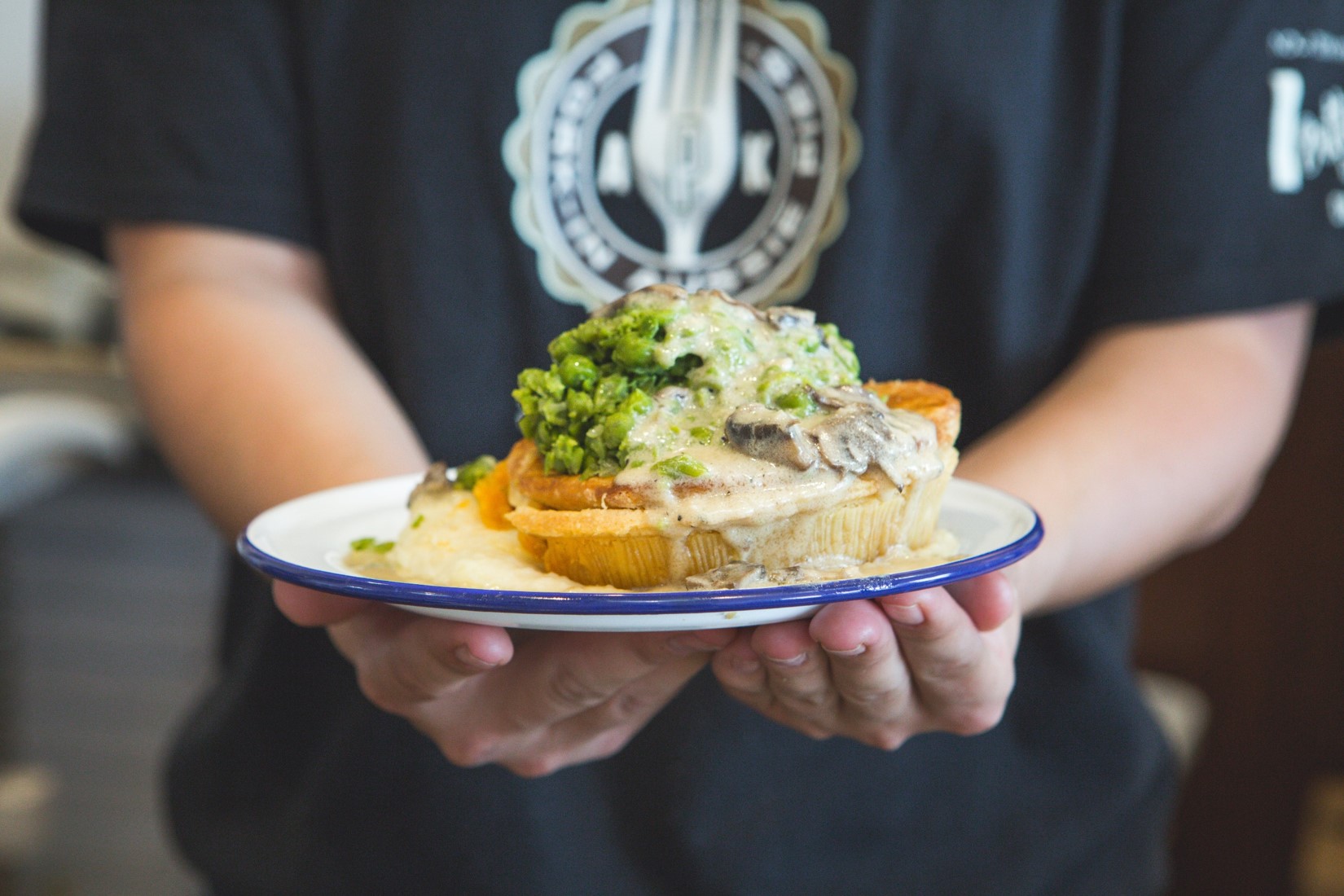 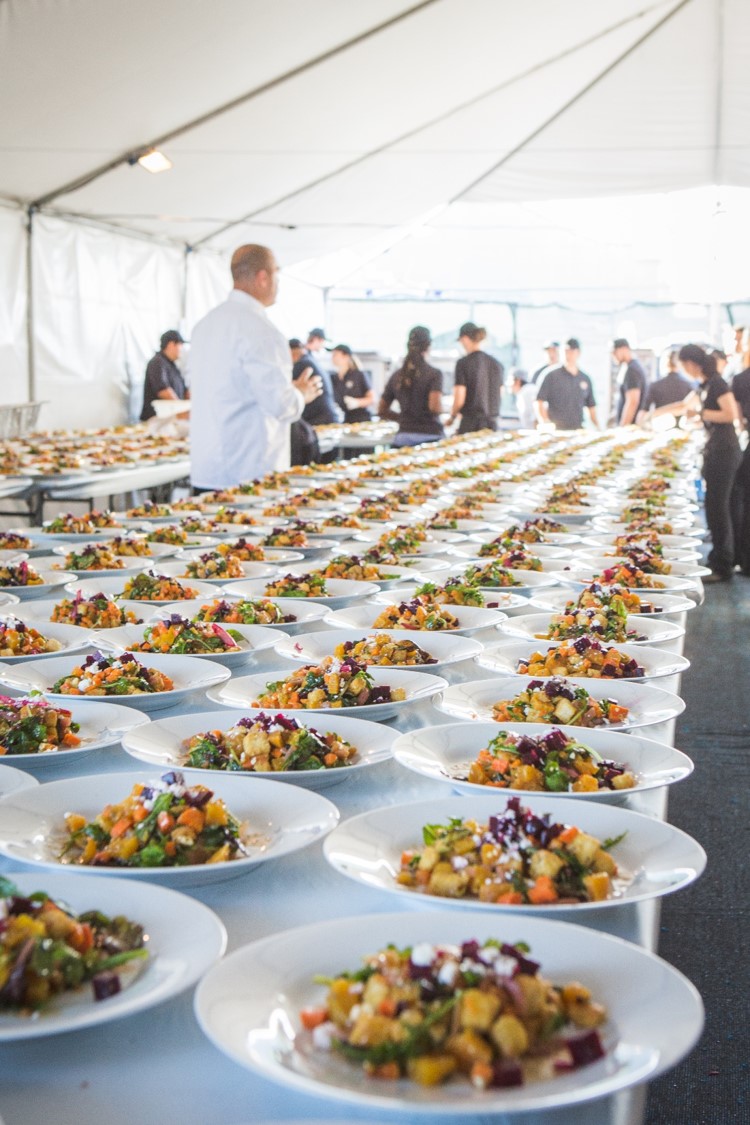 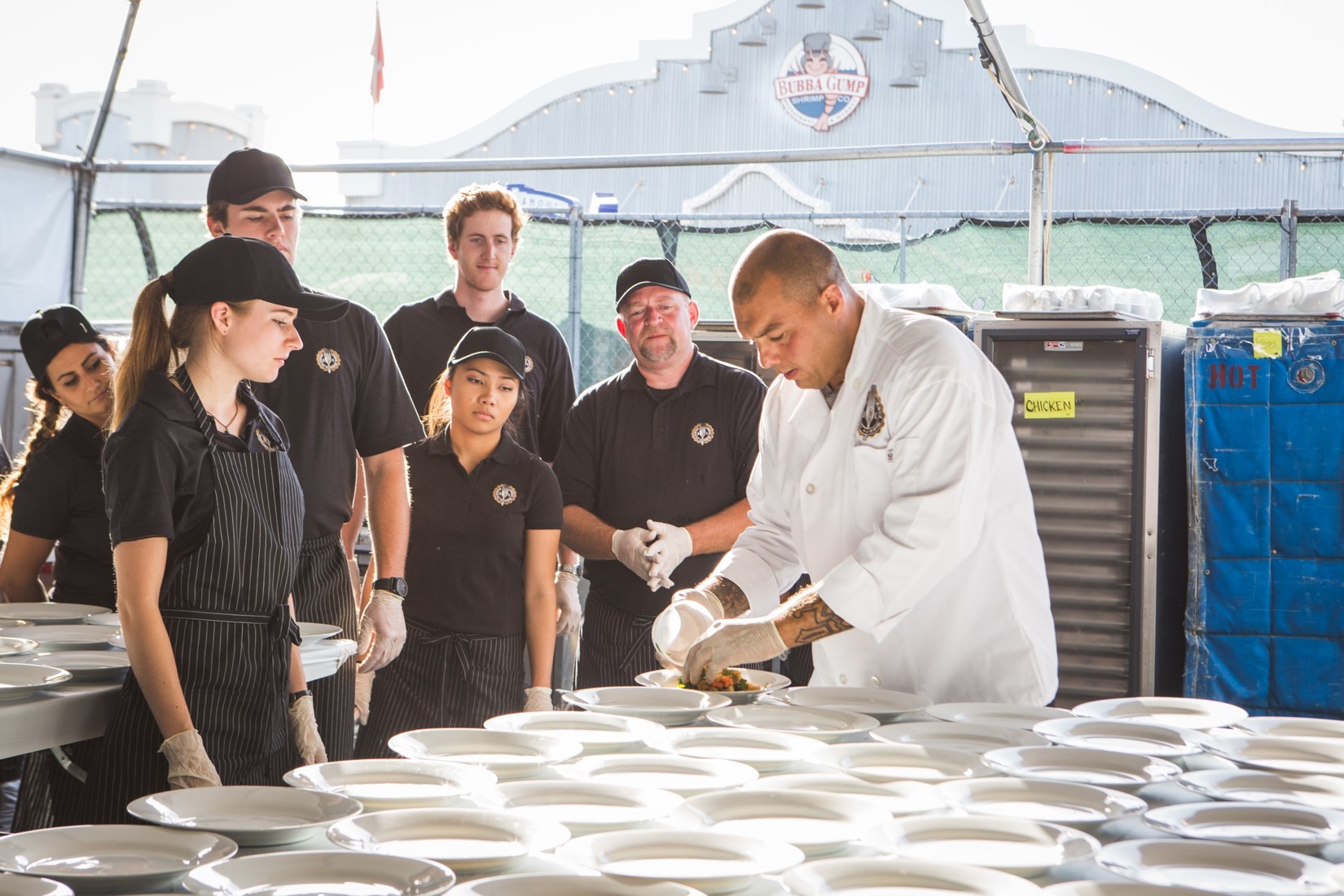 Image Credit:
Thanks to Jim Jeffries (Aussie Comedian and big fan), and the Jackass lads for kicking off their Australian tour from our place