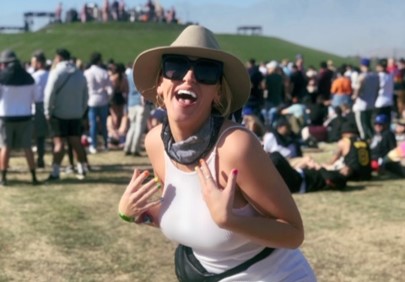 Today we’d like to introduce you to Kelly Howard.

Kelly, before we jump into specific questions, why don’t you give us some details about you and your story.
Growing up in LA, I was always interested in film, wardrobe and makeup. My mom would always find a reason to take me to Hollywood, Downtown and Beverly Hills to show me this side of town, almost like my personal tour guide. In the 90s all of these places looked like actual movie sets so it was very inspiring and exciting for me to see when I was so young. I think my mom always knew/wanted me to be involved in beauty or fashion as a career, She always had the best skincare in her bathroom growing up, mostly from Lancôme and Chanel. Always trying out her products, and seeing the way she put makeup on before going to work fascinated me. It was strange because at the time I was such a tomboy and only cared about Sonic the hedgehog beating Doctor Robotnik or when I was going to get a new skateboard.

Growing up my dad was a golfer so we had lots of trips to popular golf destinations like Palm Springs and Scottsdale. Mom and I tagged along however while Dad was playing golf we would lay out by the pool, have a nice lunch and she could almost always find a reason to hit the spa. I think I got my first facial when I was 11. Along with trips to fancy spas I started venturing more into the makeup side. I used to draw a lot when I was very young, from the age of 6-12 and stopped, don’t really remember why. I’ve always had some sort of artistry in my soul; when I discovered makeup wasn’t just a way to hide impurity’s and appear more beautiful it clicked for me. I wasn’t exactly popular in school so when it came time for dances, parties anything that involves a date, you could almost guarantee I was riding solo. So instead I would do all my friends makeup and that made me so happy!!!

High school was fun but super tough, I was never an ideal student, I didn’t connect with any of my teachers and I just wanted to be anywhere but in class. And then after the summer of 2003 my mom was diagnosed with Saliva Gland Cancer, one of the most rare cancers in the world. This took a huge toll on our entire family and I knew I wasn’t going to have her forever. She was super worried about me, and even more worried about my dad sending me off to a military school, even though it’s really what I needed. I like a lot of people that have been in my situation started acting out, cutting class and not showing any interest in college or a career. I was immediately attracted to kids at my school that always seemed like they were up to no good, while distancing myself from my friends that were more academically involved and on the right track. I graduated from a continuation school (barely) and then after a few summer classes, received my GED.

My moms condition got worse and then in late 2004 we got world that she developed a brain tumor. She suffered for about six months and on May 1, 2005 she took her last breath at our home in Redondo. I couldn’t believe she was gone but I was also relived that she wasn’t in pain anymore. Either way, I didn’t take it very well. I was stuck, I had no motivation to work, to excercise, to make any changes. I was just going day to day waiting for a handout. My father was broken, and knew he wasn’t going to get through to me, so I moved out. I was couch surfing with friends and just couldn’t take the fact that this was my life. I had no money, no plans, no where really to go. So I decided to call my dad and tell him I was ready to join the military. What did I have to lose?

So on August 29th, 2006 I left for San Antonio, Texas to join the Air Force. My dad is so proud of me, and since then we have become very close. My recruiters told me if I wanted to go anywhere I wanted, my best bet was being a police officer, so after boot camp, I got orders to Hickam AFB, HI. From there I had a deployment to Iraq in 2009, got orders for Osan AB, Korea and then after getting stationed in Washington for a few years, I did a few months in Kuwait and got out a few years later in 2014. I immediately knew I wanted to do skincare and makeup. So, I started esthetician school in Washington and then eventually transferred to Los Angeles in February 2016. With the help of my GI bill, I competed skin, hair and two makeup schools, graduating from Cinema Makeup School in August of 2017 and then EI in October 2018.

Great, so let’s dig a little deeper into the story – has it been an easy path overall and if not, what were the challenges you’ve had to overcome?
I had my first set job in February 2017, it was a dance video used as a promo for a movie. The talent I got to work with that day were pretty major so I was a bit nervous and I didn’t exactly vibe with the girl I was assisting. She actually attempted to ask me not to come back the next day. I was still in school at the time so I would take jobs every now and then, but I wasn’t confident enough in my craft to take everything I was offered, I wasted a lot of time, and for some reason my focus wasn’t fully there. School was going well, and my job at Equinox was great but I was spreading myself too thin, and turning down a lot of jobs.

Towards the end of September I got offered the position of assisting a makeup artist from Iran on a new project they were about to start filming here in LA, and the shooting would take place from 6pm-6am every night. I had such a great time, and learned so much from everyone. I did have some days during the week where I worked nights, and then I had to go into my other job or school the next day a few hours later, those days were pretty tough. However I made it through and had a fantastic on the job experience I really wanted for a long time. A few weeks later I graduated from EI school in Hollywood.

We’d love to hear more about your work.
Since graduation, I have been working as an artist for GlamSquad, and freelancing for non union productions, commercials, music videos and male grooming. Although I specialize in beauty, I also offer SFX and Fantasy makeup. I have worked part time as an Esthetician at Equinox for the past three years. I work with photographers and models on test shoots a lot to keep my creativity up. I’ve really come to love photography+styling and I would really love to work towards my goal to start creative directing. There’s something magical about having a vision and executing it. I love setting the scene and making everything look perfect. I love being around and creating with others; I love that vibration of being on set and bringing ideas to life. My imagination, positive energy and natural hustle definitely keep me going!

What moment in your career do you look back most fondly on?
My work was featured in Emmy Magazine earlier this year. It was pretty epic. 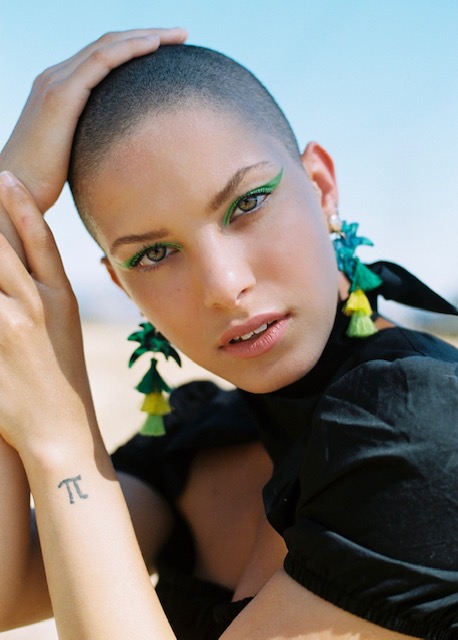 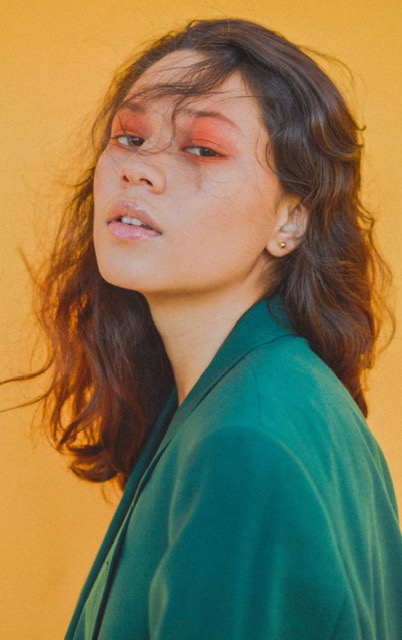 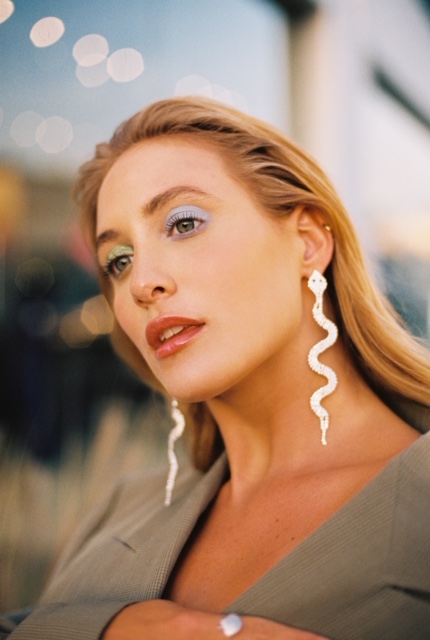 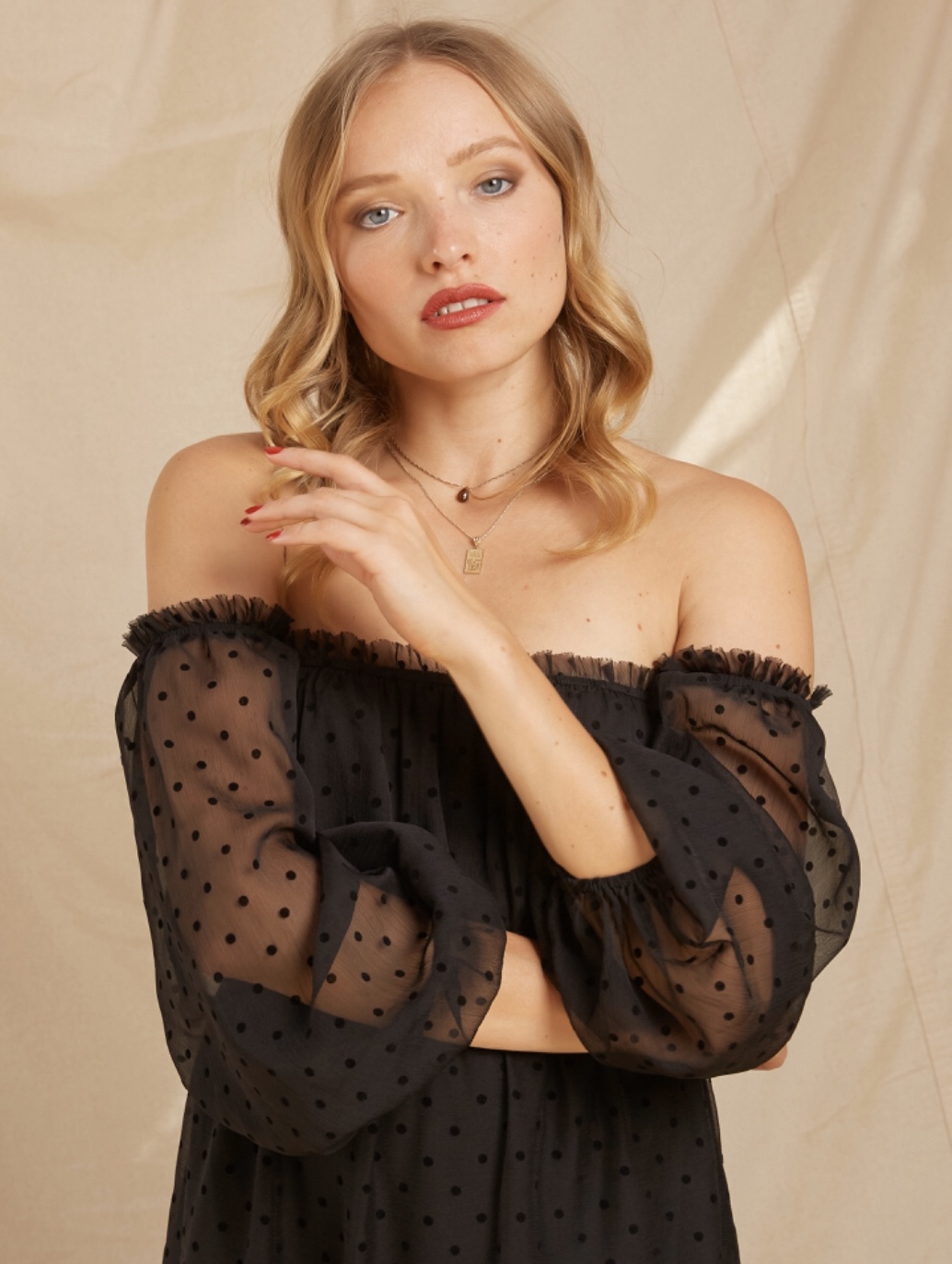 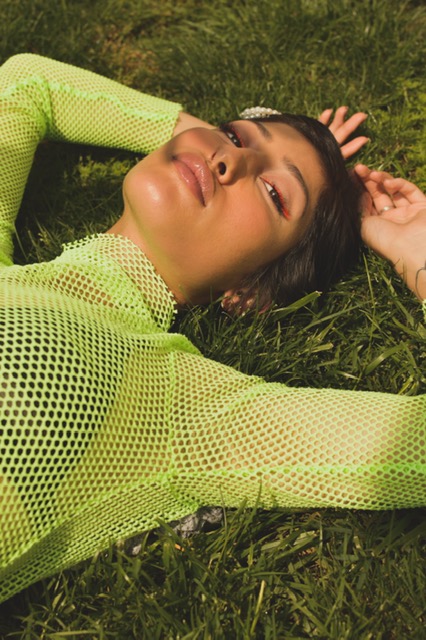