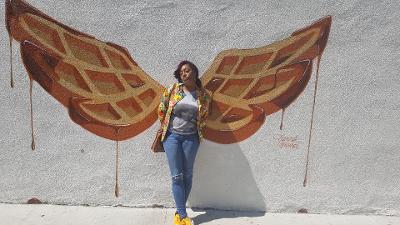 Today we’d like to introduce you to Mya Baker.

Thanks for sharing your story with us Mya. So, let’s start at the beginning and we can move on from there.
Shoot Films Not People has been around since 1995.

The name Shoot Films, Not People was birthed by me after the acquittal of LAPD officers in the Rodney King beating of 1991, which was filmed by an onlooker. The slogan initially was a call to action for people to document their own communities and to stand in solidarity against gun violence. Shortly after in 1995, it became the name and brand of an indie production company. I currently have two documentaries under the production company: ‘Silence: In Search of Black Female Sexuality and Afraid of Dark (about the fear of the black man). Both are on Amazon Prime and Afraid of Dark is also on Kwelitv, which is a black platform similar to Netflix.

Overall, has it been relatively smooth? If not, what were some of the struggles along the way?
No. I would like to think so… putting the name on t-shirts came in 2015 when I offered it up as a perk for my Kickstarter for Afraid of Dark. From that it grew in popularity, but I never had enough funds to really get it off the ground. People would comment on it whenever I wore my hoodie and I tried to sell them at festivals here and there around New York. However, the clothing brand really evolved this year when a close friend of mine who is in the industry was in the airport with the hoodie on and about five people stopped him regarding the hoodie. He said, “You losing money.” My response was, “I don’t have any money to get it off.” He said, “How much do you need?”So I created a proposal and we talked about it and he funded me, but I had to make the logo more universal. We agreed on having them both. I got everything done in terms of registering the business, trademarking the name and ordering product and marketing stuff. I was starting to do festivals like Come Up LA and other events and then COVID happened, shutting everything down. Then COVID happened.

Alright – so let’s talk business. Tell us about Shoot Films Not People – what should we know?
We are an indie production company and a clothing brand. We provide quality cotton t-shirts and cotton blended hoodies at an affordable price. We will offer our products mostly through our website, as well as film festivals, cultural events, barbershops, college campuses, and pop-up shops throughout Los Angeles. We are known for documentaries, hoodies and tees.

I am most proud of people finding out about it now. I have about 500 followers on IG that was built organically and more keeps coming in. Also, its time. It seems like because of the racial climate in this country and the protest, people are seeing the message more. It’s very relatable. Its art activism. You don’t always have to be on the frontline.

What sets me apart from others is that I am an activist. I have always created social conscious content and this is just another offspring of that. It embodies everything I believe in. I am from Chicago and the gun violence really bothers me. So much senseless violence. I stand behind my brand.

Any shoutouts? Who else deserves credit in this story – who has played a meaningful role?
My homeboy Chris Adams created the first logo for me which is actually a silhouette of me holding a super eight camera. Carl Seaton funded me and helped me create a more universal logo this year. Also, my friend Barbara Boulet has always encouraged me and supported the brand by funding my first batch of t-shirts in LA and sporting the shirt at different events. My homegirl, Sophia Coffee taught me how to hustle and sling tee shirts on the streets so it honestly gave me the balls to take on any crowd and talk to people. My son, Malakot and brother, Sunni Ali are my biggest supporters to date. My brother always links me to students who want to talk about indie film or have questions about certain things and my son is my listening ear and voice of reason. Last, I would like to Thank Kissa Star linked me to you guys which is amazing because we always look out for each other. I love that. 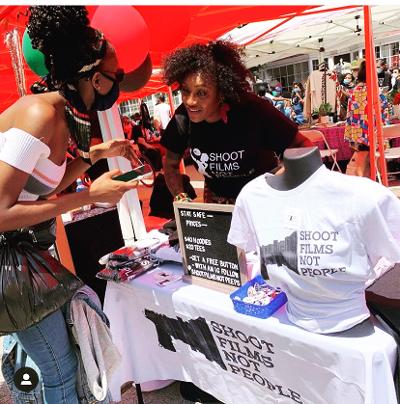 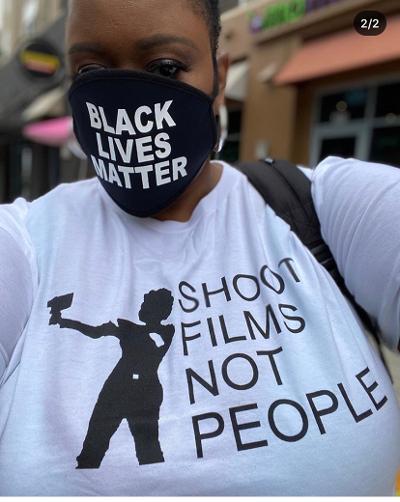 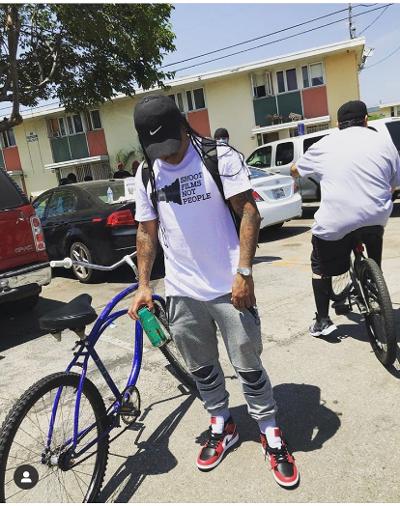 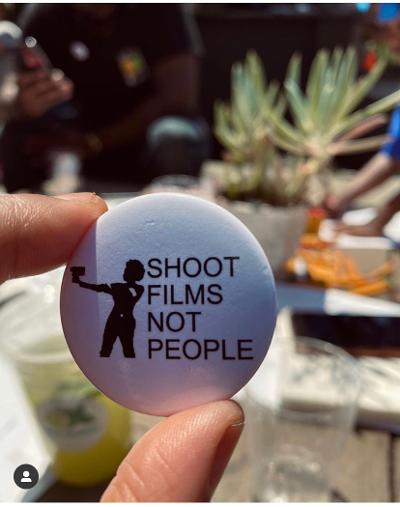 Image Credit:
Robert Solomon took the pic of me at event and Tamara Martin took a pic of herself in tee with black lives matter facemask on.