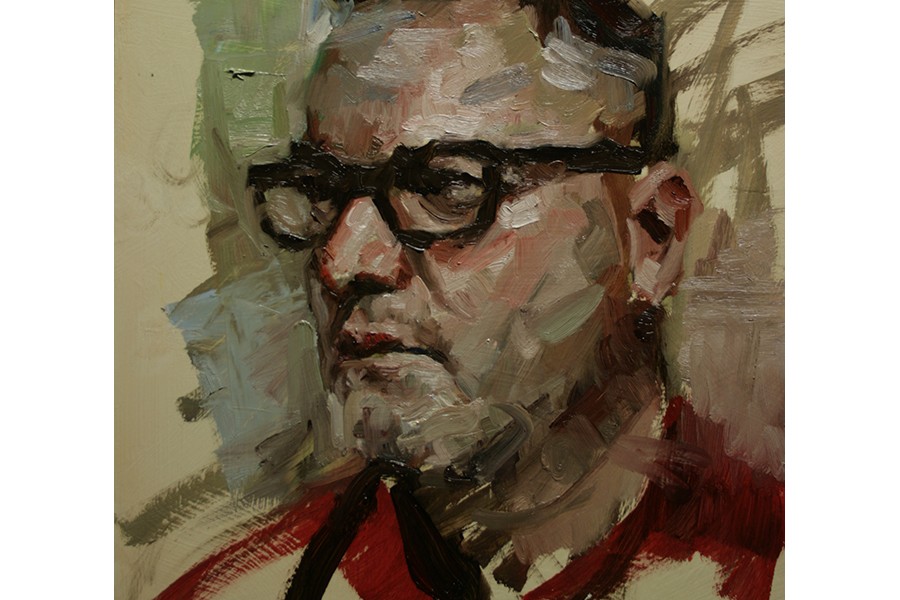 Today we’d like to introduce you to Bradford J. Salamon.

Bradford, please share your story with us. How did you get to where you are today?
My parents got divorced when I was two, When I went to my father’s home I saw his paintings that he collected. He also did some painting himself, and several times painted my brothers and me when we came over to visit. My older brother, Joe, and I did drawings at the dinner table before we were teenagers. I wanted to be like him, but I wasn’t as good and threw away everything I did until I was about 17. My father started a framing business in the mid-1970s. One day I showed him a drawing. He didn’t say he liked it or didn’t like it, but asked me to leave it at his frame shop so he could frame it. That was a big validation for me.

I played drums in several rock bands, starting at about 15. When I was 18 I was in a band that got signed to a small record label and they asked me to do art for the cover. When the record label and the band agreed to use my drawings that was another validation. At 19 I dropped out of college, in part because my art teachers didn’t support what I wanted to do. While living in Hollywood, pursuing a music career, the singer in our band quit and re-joined an earlier group he had been in. This was a seminal moment for me. I realized, at that moment, that I wanted to pursue my art interests, and that I could not risk my career to the whims of other collaborators.

I had a knack for likeness and so I began drawing my rock-and-roll heroes in charcoal. My father was so impressed with these early drawings that he fronted me the money to publish four of them in 1983. I ended up publishing over 100 subjects and getting license deals with many major management companies, and marketing these through major record store chains and poster shops.

For three years I was the official artist for the Grammy awards, but the idea of doing portraits of famous people was losing interest for me.

At 30 I received a college degree and decided to pursue a fine art career that has continued to this day. I’m only interested in painting people I know and that are in my life. Painting everyday objects is also a subject I enjoy painting. I am extremely grateful to be able to paint full-time, and to be supported by several quality galleries. I have been honored with two solo museum exhibits and have been included in many group museum shows. My work is part of many important private collections and public institutions.

Has it been a smooth road?
The start of my art career, in my early 20s, was surprisingly smooth, and my early success became a blessing and a curse. in my late 20s, as the stakes of what I was doing were raised, the legal difficulties of working with famous properties became a daily challenge. I was sued more than once, and I spent more time on the phone with management companies, lawyers and distributors than I did making art. I eventually lost almost everything: the vintage cars, the big house, and my wife. Not only was I broke but I was in debt to lawyers and publishing companies.

What has been the proudest moment of your career so far?
I would have to say that the show coming up at the Pasadena Museum of California Art next month where I will be the youngest artist exhibiting and one of only a few that are living. The show is titled “In the Land of Sunshine” and it includes a list of the best California Scene painters. Millard Sheets, Rex Brandt, Roger Kuntz, Milford Zornes, Emil Kosa and many more. (It’s important to note that all the artists in this show tell stories and use the human figure in their work almost exclusively. So these artists are a different group entirely from the California Impressionists like Guy Rose, William Wendt, Edgar Payne, etc.)

Is there something we can do as a city to improve the outlook for professionals like you?
Yes, it’s a good place for me to work. I feel immensely lucky that my family raised me here, and that Los Angeles happened to be a great place for what I wanted to do. Yes, it’s a good place to start, but yet again that’s all I know. So it’s a hard question to answer. We could always use more collectors of course. There are plenty of artists, museums, schools, art critics and galleries, but never enough collectors. I would love to see the galleries supported more somehow. I don’t think people realize how hard it is to make a gallery successful financially.