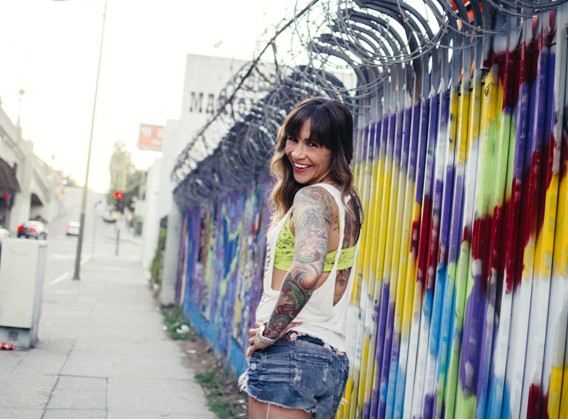 Today we’d like to introduce you to Roxy Richardson from Function 5 Fitness.

Roxy is an example of what makes us so proud of the VoyageLA mission.  She’s hard working, determined and a total badass.  Below, we share an edited excerpt of our interview with Roxy.

Roxy, can you walk us through your story and how you got started?

I discovered my love for Muay Thai in 2002, was obsessed with the training and started competing soon after. Because of my love for the sport I got certified as a personal trainer by the American Council on Exercise (ACE) in 2005 and decided to dedicated my life to fitness and health. I competed for 10 years becoming one of the pioneers for women’s Muay Thai. I was the first female fighter in the United States to fight a 5 round full rules Muay Thai bout, when I made my pro debut in 2009. I retired in 2011 to open my gym, Function 5 Fitness. Function 5 Fitness is the first Muay Thai gym in the USA to be owned and operated by a female head coach. I am also a SFG II Kettlebell Instructor and a Certified Nutritional Counselor.

Exciting – has it been a smooth road?

I never doubted my ability as a female to make my mark in a male dominated sport. I just did the work and let the results speak for themselves. The road was never smooth, but as most fighters will tell you it’s the challenge that fuels them. I was so broke at one point trying to train and fight as an amateur and pay the bills, when I totaled my car, which added insult to injury. I felt momentarily defeated, as I had no money for another one and I had to get to work. However, I bought a bicycle and for an entire year I rode the bike to and from the gym and to work and all over Los Angeles. I was 28 years old, barely making ends meet, renting a shared a room in a friends apartment and not making a cent for my dedication to the sport. Some might think this was a failure, but I used it as fuel for my fighting and it improved my ambition and skills. Around 2008 I branched out on my own in the fitness profession and my personal training business was booming, this was in the middle of the recession, but I never looked at it that way and just put one foot in front of another and did the job. I fought seven times that year and my career took off. In 2009 I went pro at 31 years old, which is not young for a professional athlete. I had the opportunity to challenge my skills against international opponents, which I am grateful for. Muay Thai has never been a profitable sport and the athletes today are still not paid their worth, especially in the USA, but I was lucky enough to get involved with teaching early on and it’s been very rewarding to pass on my knowledge to my students.

Got it.  Let’s go a little deeper into your story.  In particular can you tell me about the hardest time in your career?

I had a hard time after my first loss in a Muay Thai fight. I fought Gina Carano (a famous mma fighter and now action star), we were both up and coming amateurs the time and we had only had about 2-3 fights each. After that loss I realized that if I really wanted to succeed in the sport I had to make a decision to be 110% in. I had to make Muay Thai my only priority. I could not try and pursue any other dreams. I was in Los Angeles, having moved there to try and write, but I decided to put writing in the back seat and give everything I had to Muay Thai. My career took off after that and that focus lead me to win many fights, make Muay Thai and fitness my profession and lead to eventually opening my gym. Had it not been for that loss I would have never realized that to succeed you have to be “all in”. After that awakening moment, nothing seemed impossible I just knew I had to believe in myself and work hard.

One of the recurring themes we see in our conversations with many of LA’s most successful professionals is the ability to turn a disappointment into a spring board.  Really great to hear about how you were able to turn a loss into a big win. So let’s talk about your future – any big plans?

My plans for the future are to grow my gym, my team and my fighters to their full potential. There is still room for growth in my current studio and I hope to grow this year some more. If it ever fills to the point where we can’t add new classes I to expand to a larger location in the same area, but I am also happy just focusing on quality of service for my students and not being too overly concerned with massive growth.