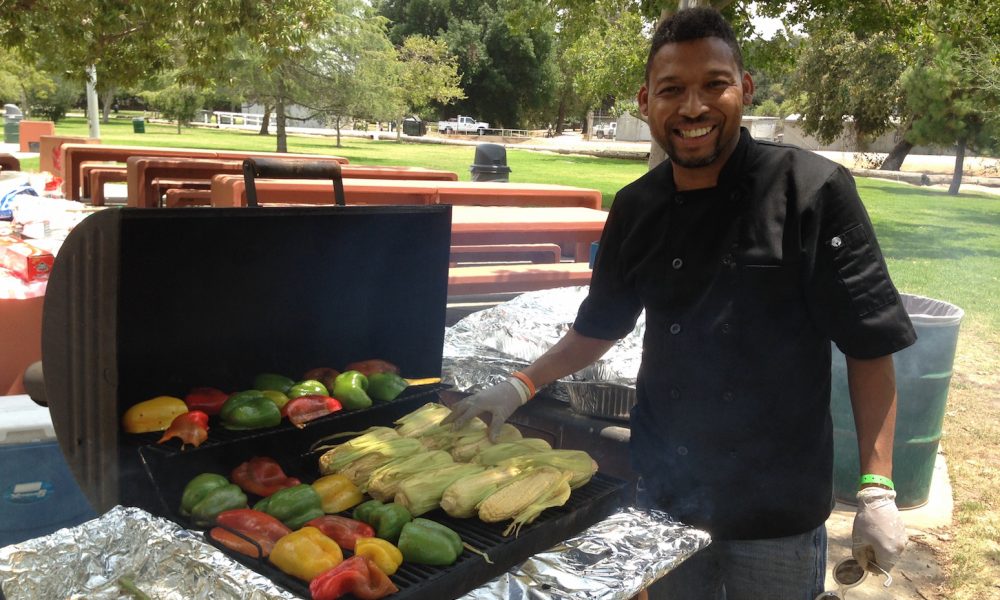 Today we’d like to introduce you to Mick Brown.

So, before we jump into specific questions about the business, why don’t you give us some details about you and your story.
My Momma had barely dropped me at Cook County Hospital in Chicago, before I was at my Grandfather’s knee learning about BBQ. From age 6, we used to wake up early every Grilling Holiday (Memorial Day, 4th of July, etc…) and I’d help him shop and serve people barbecue from dusk to dawn. Of course, my primary job was making sure he continuously had a cold Budweiser at all times. In terms of Food, I didn’t know how good we had it until after he passed away when I was 18. I found it next to impossible to find anything nearly as scrumptious as the BBQ Recipes he took with him.

So, I have spent the past 30+ years traveling the world sampling Foods from the Grill. Everywhere from Costa Rica to Paris, and most recently the Islands of Greece. Started catering BBQ parties part-time since opening Chicago Pizza Restaurants in Culver City and Westwood in early 2000’s. For past seven years, my focus has been on catering and teaching private and group cooking lessons with Tastee BQ Grilling Co. I also developed top rated Gluten-Salt-and Sugar-Free Spice Rubs for California Gold BBQ Rubs (HEROIC! now available at Amazon.com).

After winning for Grill Master Champion on the first-ever BBQ Episode of Food Network’s “Cutthroat Kitchen” in 2015, I have had the opportunity to cook at the (former) Beatle’s Mansion and catered on-camera Katie Maloney and Tom Schwartz’s Engagement Party on Bravo’s TV’s “Vanderpump Rules” [at Lisa Vanderpump’s (of Beverly Hills’ Housewives) famous Villa Rosa estate]. I am also proud to do cookouts for the Boys and Girls Club, the Santa Monica Police Department and volunteer at more modest Charity events, like for GreySave (Greyhound rescues group) and each year at the American Cancer Society’s Relay for Life.

We’re always bombarded by how great it is to pursue your passion, etc. – but we’ve spoken with enough people to know that it’s not always easy. Overall, would you say things have been easy for you?
Of course there have been many bumps along the way, as well as some amazing twists and turns. My Catering and BBQ Rub companies are on the “first wave” of Healthier Grilling, and the industry is slow to change. We are still one of the few Onsite Caterers in the country that regularly offers Gluten-Free, Vegan and Vegetarian BBQ Menus. Through the BBQ RESCUES Foundation, I hope to influence more caterers and restaurants to offer Healthier Grilling Options to their customers. In Los Angeles, as well as around the U.S.

Just about a year after introducing Gluten Free BBQ Rubs (with Superfoods) I was diagnosed with Diabetes 2. So, I had to not only cook lighter for clients, but also adjust my own daily diet. While being treated for severe back pains, I went Jogging back to the gym, tennis court and started learning Pilates. As a result, I have been able to shed about 40 lbs. in the past year or so. It is still a struggle to stay consistent, so I created the new #GetFitChallenge to help keep me on my toes, while encouraging other people to do the same.

Some people still question my motives for all the “Healthy BBQ Talk”. As if I am making zillions (of dollars) off of hawking No Calorie Spice Rubs on Amazon and grilling Low-Fat Ribs for Celebrities. That is why BBQ RESCUES! Foundation will be transparent and Non-Profit. Hopefully, folks will know that I take Health and Fitness very seriously, and that is why I encourage them to do the same. By producing (and sharing) light hearted blogs, videos and Podcasts I hope to make all of it actually Fun!

So, as you know, we’re impressed with BBQ RESCUES! – tell our readers more, for example what you’re most proud of as a company and what sets you apart from others.
Right now, my latest project BBQ RESCUES! is in the process of being accredited as a Non-Profit Foundation. I hope to spend my final years before retirement reaching out to people around the country with the message that grilling and BBQ can actually be part of a Fit & Healthy Lifestyle. I plan to consolidate easy grilling recipes from my food blogs – BBQ Catering Confidential and The Adventures of TasteeBQ and put them into a Cookbook to raise money for the Foundation. I hope to promote conscious and mindful eating in the BBQ community and to help battle childhood obesity. So far, we have started to produce videos for a BBQ RESCUES! TV Channel on YouTube, broadcast on Blog Talk Radio and release Podcasts on iTunes.

So, what’s next? Any big plans?
I hope to have the BBQ RESCUES! foundation officially launched by the time I land in Houston, TX. at the end of the month to do a youth charity fundraiser for Great Inspirations for Teens (GIFT) and Our Children Our Future (OCOF) on Sunday, March 26th. The event is called “The #GYMM [GIFT (us) Your McFastFood Money] BBQ Cookout with Chef Mick Brown.” I am helping them publicize the Pay-What-You-Can event on social media.

During a BBQ boot camp, I will train volunteers from both organizations on how to put on a successful food fundraiser. At the Dinner, we will demonstrate delicious & healthy BBQ recipes to families that they can prepare for less money than they spend at fast food drive-thrus.

Then on March 29th-April 1, I will be attending my first ever Conference of the National Barbecue and Grilling Association (NBBQA) to be held in Fort Worth, TX. This year’s theme is aptly named “I Am BBQ”. I feel like it will be a great place to start changing people’s minds about what BBQ can be. For example, my video for Grilled BBQ Gumbo (which can be served Vegan or include Smoked Meats), is one of my most popular, yet. I am starting to hear from Talent Agents and Production Companies, so hopefully they will help me get sponsors. Then we can really get the word out to the public.

I also recently shot an episode of a new cooking competition, that I can’t say much about due to confidentially agreements, etc… I think you should be hearing more about it when it airs later in April.