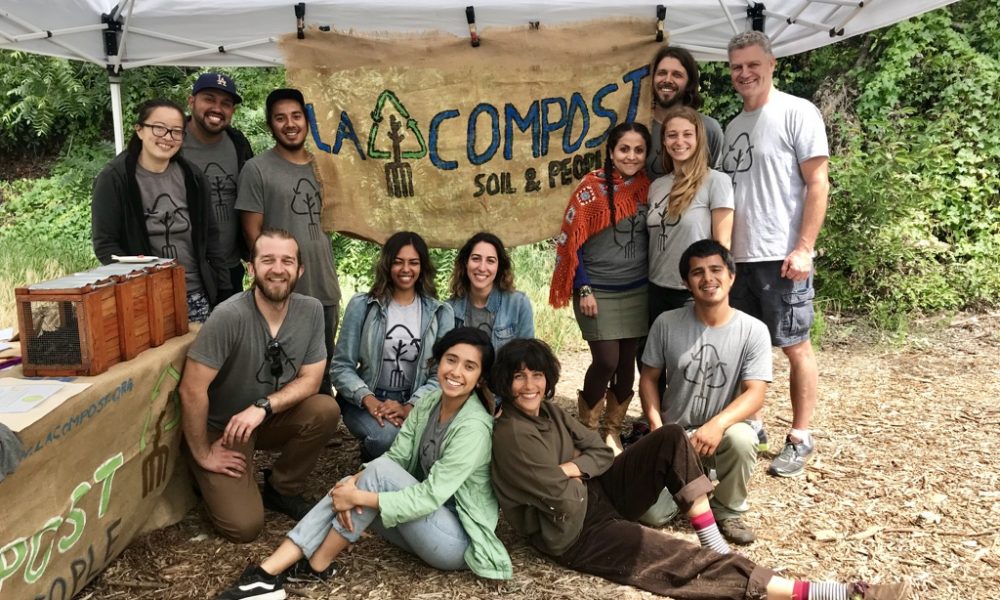 Today we’d like to introduce you to Michael Martinez.

Michael, please share your story with us. How did you get to where you are today?
Having been born and raised in Los Angeles, I had the luxury of playing outside most months out of the year without having to worry about weather. Playing outside allowed my brother and I to make several connections to the natural systems that we were a part of. From my grandfather’s garden, which oddly enough had faces drawn on every rock, to the citrus and avocado trees that we climbed throughout the year to harvest only the ripest fruit. Within our avocado tree contained one of the best gifts I could have received as a child… a treehouse. One of the best memories I had was spending the night in that treehouse with my brother and father. As I look back as an adult, sleeping in the cool 72-degree weather of a Southern California night was not as daring or dangerous as it may have felt as a child, but it left a positive imprint nonetheless. The trees in which I played, climbed, and ate fruit from were sacred to me.

As a former 5th grade reading and writing teacher, I realized that many of my students did not have similar experiences in regards to seeing how they were a part of nature and the natural systems around them. Having taught in Miami Florida some of my students lived 2 miles from the ocean, yet never stepped foot in it. There was a clear disconnect from the natural systems that they were a part of.

To create opportunities for connections to be made, I would often use analogies in my instruction. While teaching during the first week of my second year I pulled out a seed.

I mentioned how this seed was just about to begin an incredible journey, a journey that would involve magical transformations and experiences that would shape its growth over time. The seed needed a community to support its growth. From the soil, water, adequate sunlight, and network of microbes in the soil, just like each of them needed a strong community to support their own growth and development. From their family, friends, mentors, teachers and beyond, each pouring into them would be key to their long-term growth. I mentioned how along the way there would be situations and circumstances that would obstruct their development, from those poisoning the soil, those choking their roots, to those who would try to block their sunlight or access to water. It was their job to be resilient, form strong relationships that would allow them to coexist and be strong for one another when they were in need of support.

I mentioned how everyone’s journey is different, and everyone’s support system is unique, and what they were capable of becoming is truly life-changing. This seed has the potential to become a tree, that can bear fruit for others to consume, it can provide shelter for smaller organisms, and shade or organic matter for those growing under its canopy. I wanted them to know that their magnificent growth wasn’t just about them, it’s also about those who are positively affected by it.

What I realized was that there was a huge level a disconnect not just from the food that my students ate, but also how they viewed themselves in and as a part of nature. The Garden Club we started reminded students that food came from the ground, that water drains quickly in sandy soil, and that when students plant seeds, they build a sense of ownership, investment, and appreciating for the crop that comes out. The seeds and early idea of LA Compost were planted in that after-school garden program where students constructed their own knowledge, felt like they were a part of something bigger than themselves, and started to see the connected systems in the natural world.

Great, so let’s dig a little deeper into the story – has it been an easy path overall and if not, what were the challenges you’ve had to overcome?
Starting L.A. Compost was not easy. Trying to explain the importance of compost to friends and family was difficult, and the small donations we received early on were enough to build more school gardens but that’s about it. There was a lot of learning by doing along the way but what was evident from the start was that a small group of people were creating positive change. We were changing the way people viewed both food and each other. From a small collective group of bikers early on to creating a decentralized network of compost hubs across the most populous county in the country, we stuck and continue to stick the vision. To connect the people of LA to their soil and each other. The side hussles were real and I’d be lying if I told you that I was able to hire myself within the first year… it took five years before I brought myself on board. But now we’re a team of 13 and I’m happy that my team looks and represents the city of L.A.

L.A. Compost – what should we know? What do you guys do best? What sets you apart from the competition?
Our mission at LA Compost is to connect the people of Los Angeles to the soil, and each other. We achieve our mission through educational programming and facilitating access to local compost sites. We demystify the process of composting and make composting practices accessible for all individuals regardless of income level, education, or access to healthy food. We retell the story of food through composting, to include its life beyond the plate, emphasizing the profound impact healthy soils have on our communities.

Our programs focus on replicable, local composting infrastructure and education for the individual and their community. We serve residents and households, through educational workshops and farmers market drop off locations. We serve communities through the construction and facilitation of a 3- stage compost bin installed in gardens, schools, churches, parks and places of work. Additionally, we serve food recovery organizations and small food businesses by accepting inedible food scraps and generating finished compost to be redistributed to urban farms, parks, gardens and homes.

What moment in your career do you look back most fondly on?
I’m proud of two things:

1) I’m incredibly proud of my team. Each of them represents a different part of LA and they add so much “life” wherever they go. They’re essentially an embodiment of compost.

2) I’m proud of my immediate family, my wife for cheering me on from the beginning to my two sons for smiling every day and getting excited about compost/being outside. 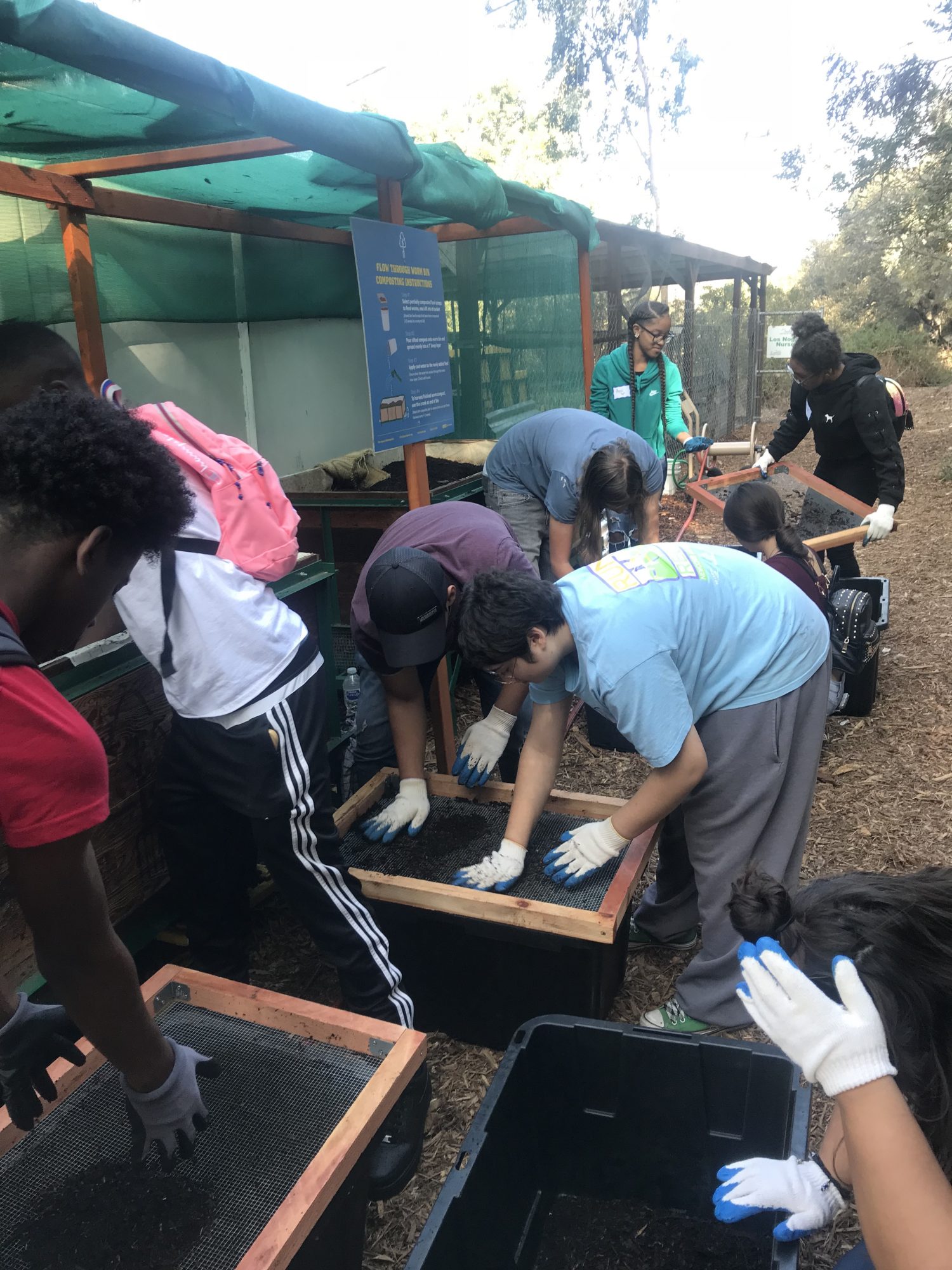 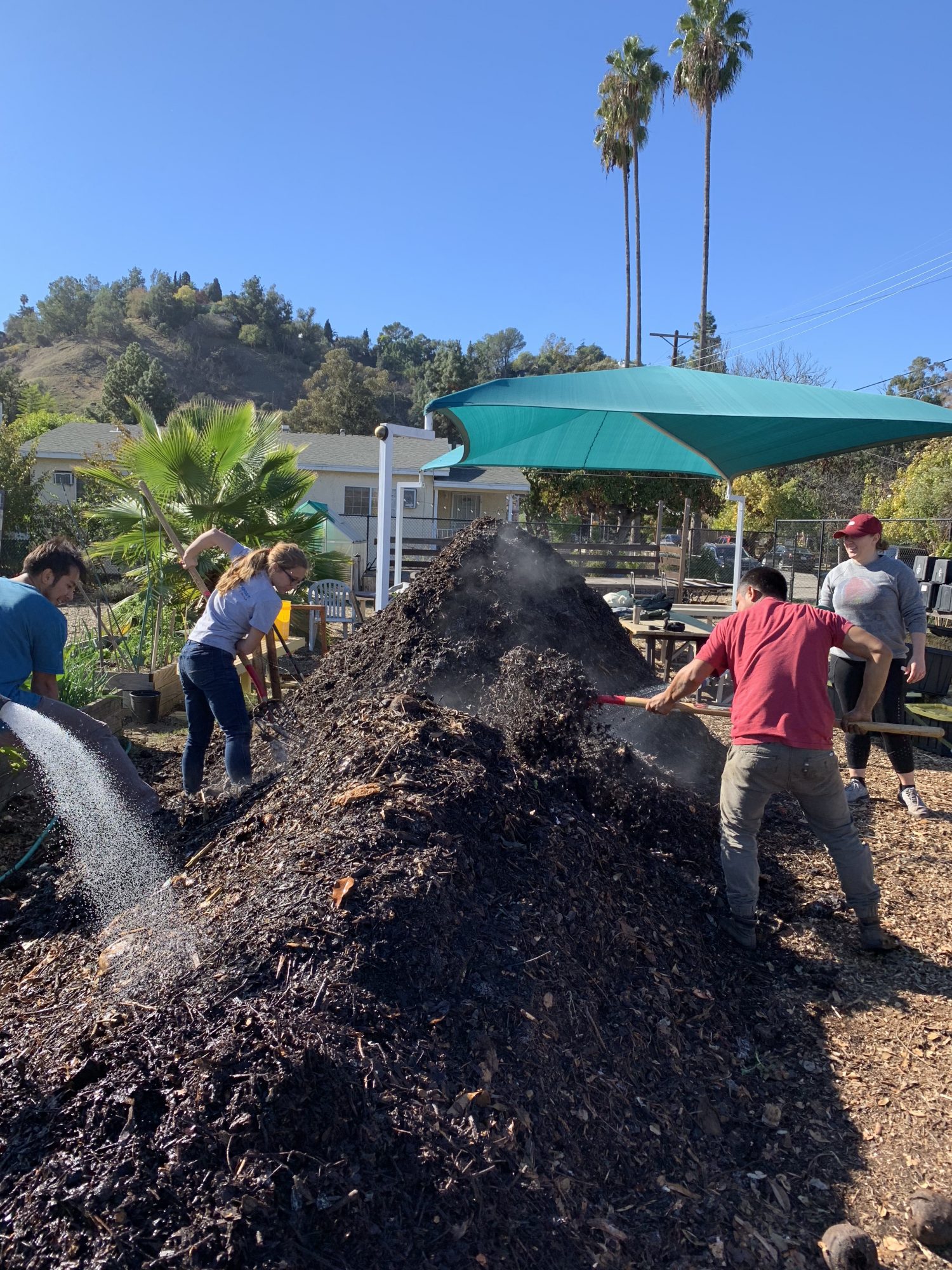 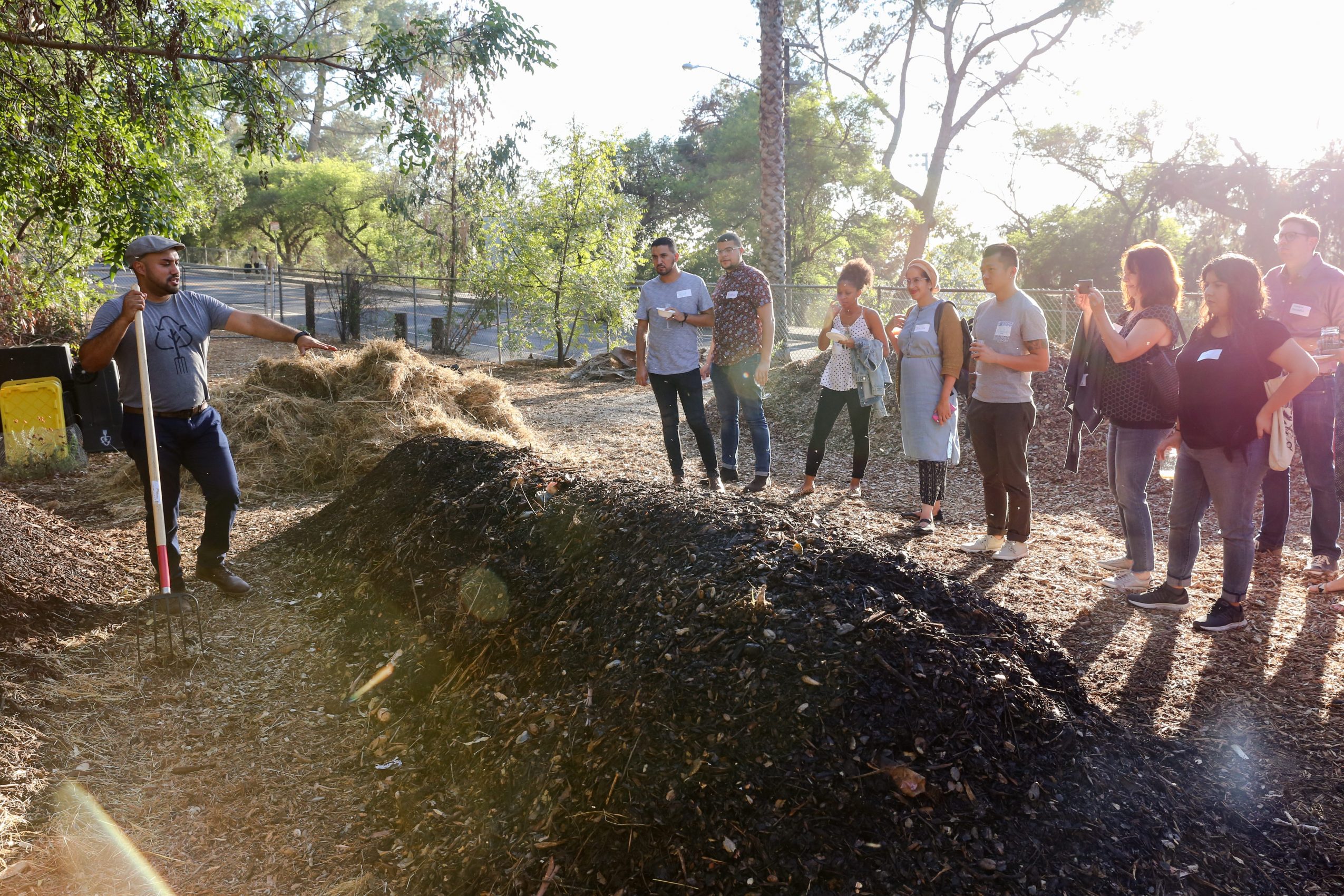 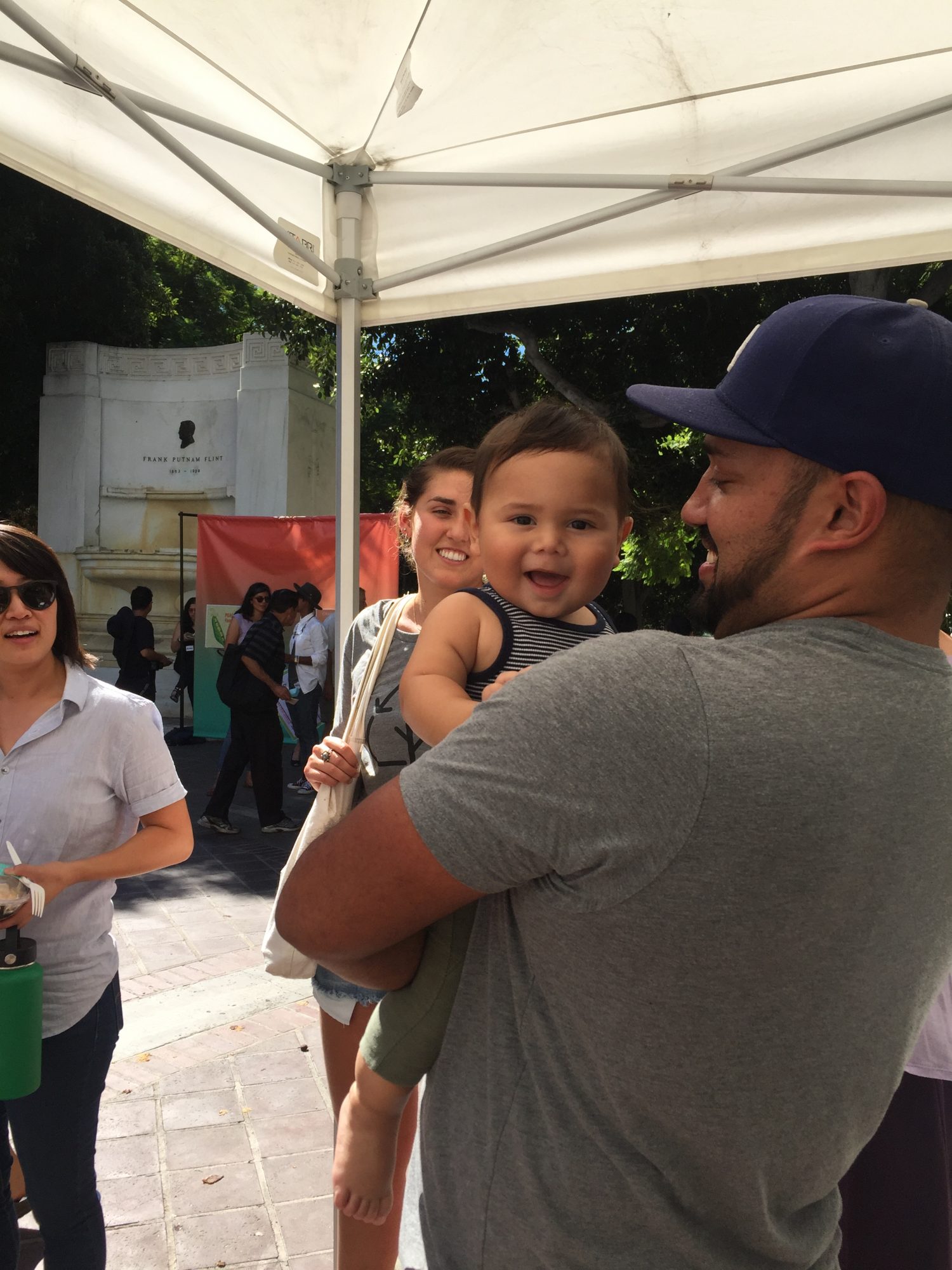 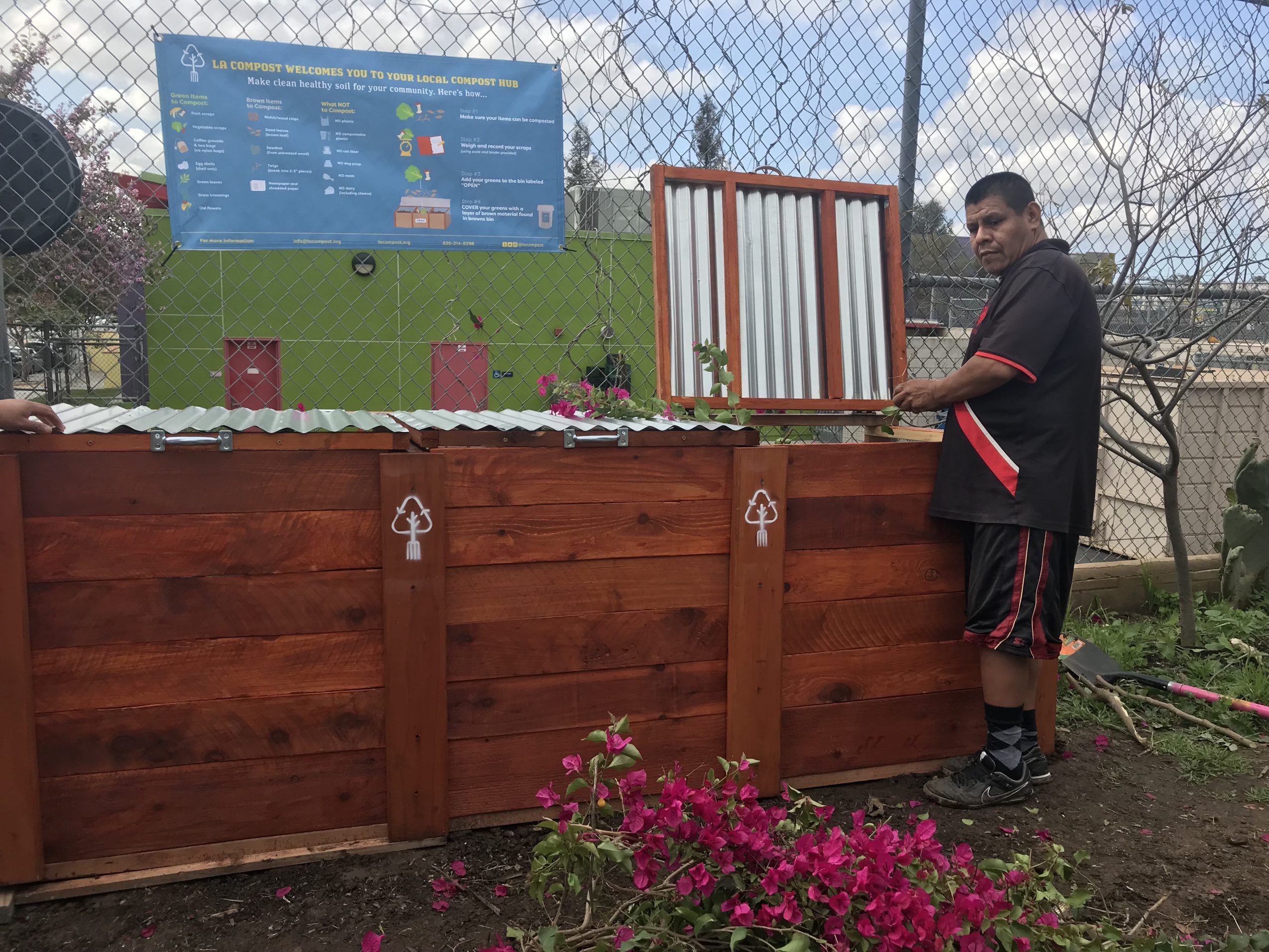 Image Credit:
Some images taken by the incredible individuals at Las Fotos Project