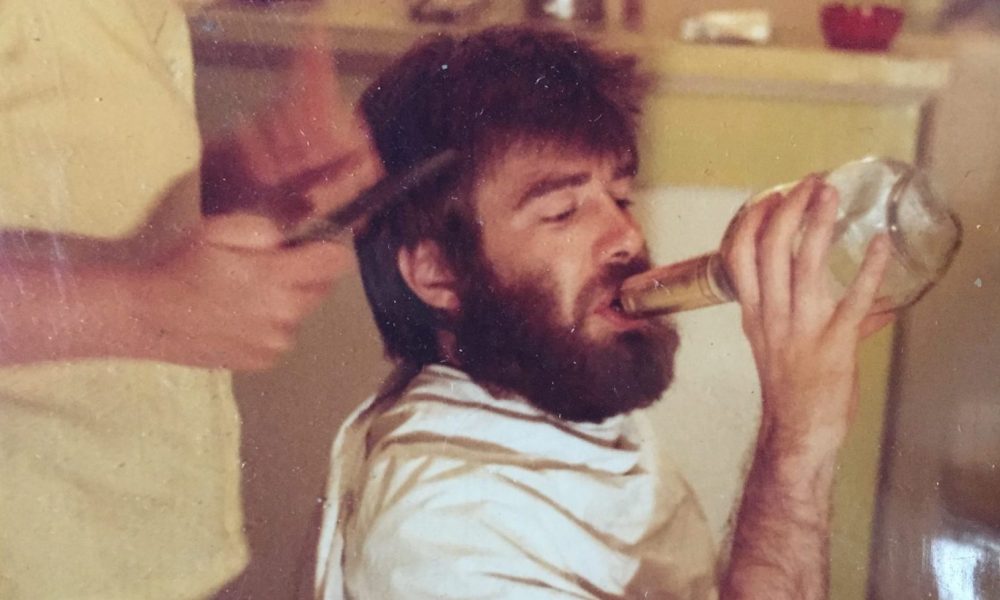 Today we’d like to introduce you to Michael Arata.

So, before we jump into specific questions about the business, why don’t you give us some details about you and your story.
I suppose my path started in high school when one of the campus counselors advised me to seek a career in ditch digging and construction. Not that I had an issue with either of those trades, I thought he was just passing me through the system. I ended up completing my HS career in the art department, making paintings, assemblage, sculpture, ceramics, and graphics.

Instructors told me I had to get a college degree to continue, so I did. Didn’t think twice about it — different times. I have been making art ever since. I ended up moving to LA in the mid-’80s with my wife to pursue her MFA art degree at USC. We relocated to a loft downtown near the produce district. We ended up moving to Highland Park when it was still dangerous but affordable, with drug dealers and prostitutes on every corner. My car was wounded in a drive-by one night.

Since that time I have shown my artwork in many galleries in Los Angeles, New York, Europe, Japan, and South America. I have the support of a handful of dedicated collectors who continue to acquire my works. In the mid-1990 “s I co-founded a venue I named “One Night Stand” exhibitions. We would rent hotel rooms, curate an exhibition lasting no more than one weekend, usually one night, remove the hotel art and install ours, then host an artists reception.

The two midtown hotels we used were The Farmers Daughter (the name inspired a “one night stand”) on Fairfax and the Park Plaza Lodge on the third street. We produced exhibitions at those locations for over seven years. I still run into artists who remind me that I gave them their first opportunity to show their artwork in Los Angeles.

Overall, has it been relatively smooth? If not, what were some of the struggles along the way?
It’s only a smooth road if you have a trust fund. My mentor in my college days would tell stories about how tough it was for him working as an artist- the phrase he would use still sticks in my mind, he would say “We were as poor as church mice.” I certainly have had a share of destitute days too.

Whenever a walk by a church I check for the mice, wonder if I should feed them. I can remember smoking and drinking with Karl, Jared, Kelly, and Penny plotting and laying plans to usurp and storm the powers that be in the Art World. Having a working studio practice usually requires having a full-time job to support the studio operation.

Essentially artists have two full-time jobs and an active social life. The more fellow artists we engage with helps to fuel financial growth opportunities and cross-pollination of visual ideas and content. Networking leads to workable day job and exhibition opportunities.

We’d love to hear more about what you do.
I work as an artist. I am lucky enough to have my own studio to work in. My work has a performative slice that can be interactive or documentary in nature.

The art work ranges from figurative to abstraction dotting a lot of “I”s, crossing T”s on the side. The art work I produce usually has an initially pleasant visual impact that is generally used as an entry point to reveal a deeper concern, often relating to fashion, sex, religion, politics, social commentary and personal experiences. Generally these issues are gleaned from public news venues or sometimes from the mail that is delivered by the US postal service, in turn the mail can become the physical material used for an objects fabrication.

If I were required to codify my work and skew my practice to an ‘ism” In the Post Conceptual art climate, it could be labeled “Contentualism” as in content driven.

In the catalog essay for his survey show “ARATALAND” art critic Doug Harvey writes “ Artists like Michael Arata have absorbed and adapted the lessons of the last century and a half of artistic experiment and identified the inescapable common denominator as the human body. By reasserting the physicality of such seemingly immaterial conceptual quantities as categorization, quantification, emotions, humor, spirituality, territoriality, transaction, and play, and by embodying them in the hardwired language of the human nervous system – AKA formalist aesthetics – Arata has imagineered a parallel reality that invites us to drop our hard-won defenses and go for a ride. But it’s more than just entertainment – free your butt and your mind might follow.”

Any shoutouts? Who else deserves credit in this story – who has played a meaningful role?
My wife, Penelope deserves credit for putting up with my artistic shenanigans over the years. She has assisted me with many installation projects. There was this one time when I was doing an outdoor installation, and I need to sink some posts in the ground. We rented a handheld gas-powered auger and started drilling. 12″ diameter. Holes in the earth.

The machine hit something solid and froze, the top part that we were holding started spinning and whipped us around a few times before flinging us in opposite directions. We may have invented a dangerous new kids toy (not to be used without adult supervision). Don’t try this at home kids; art can be a dangerous business. 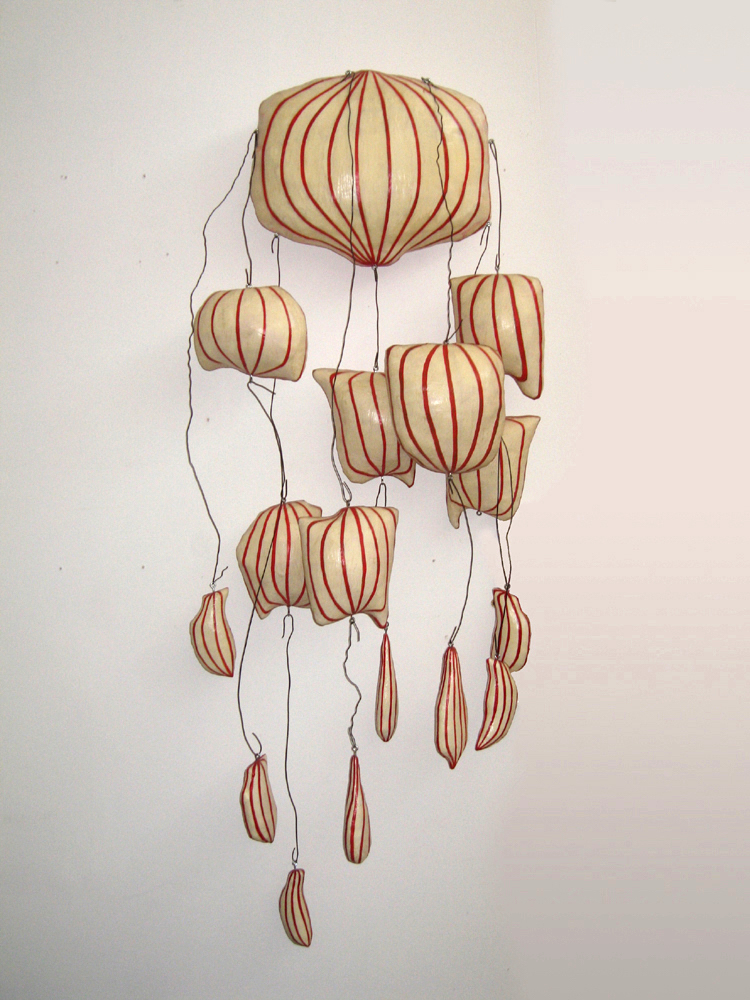 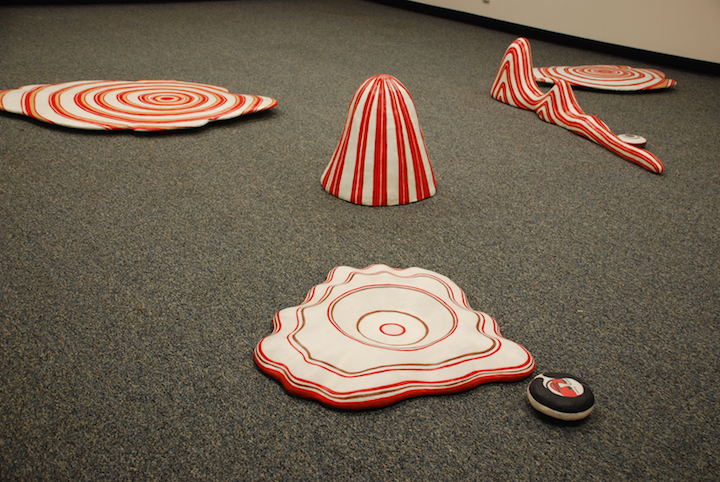 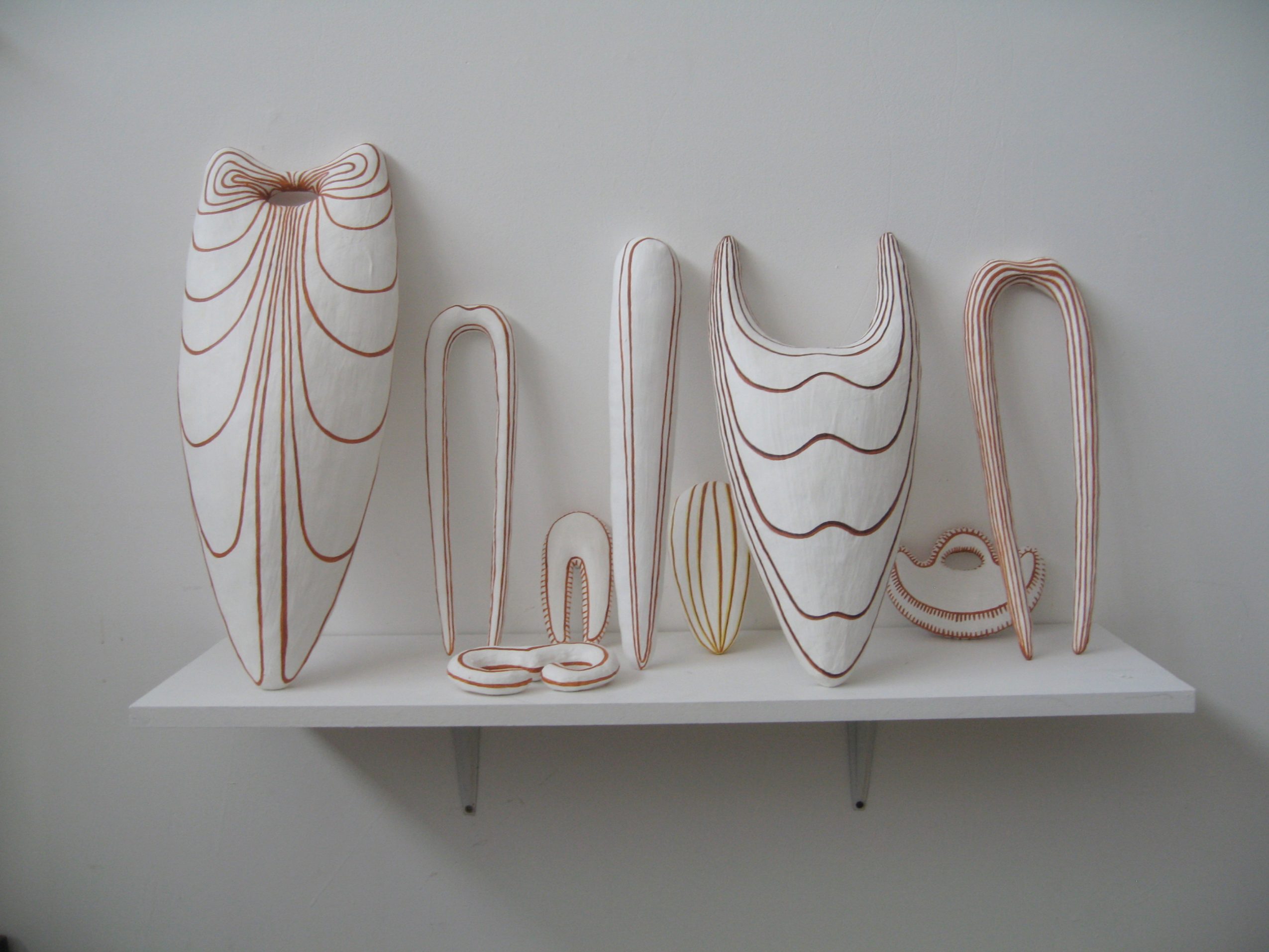 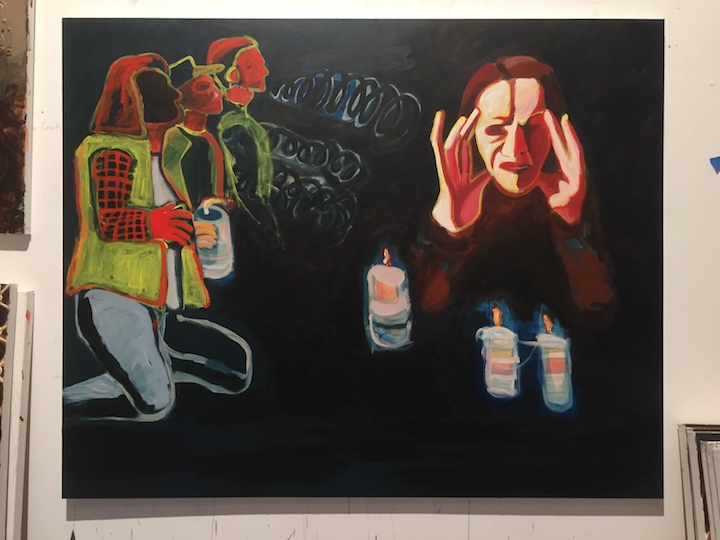 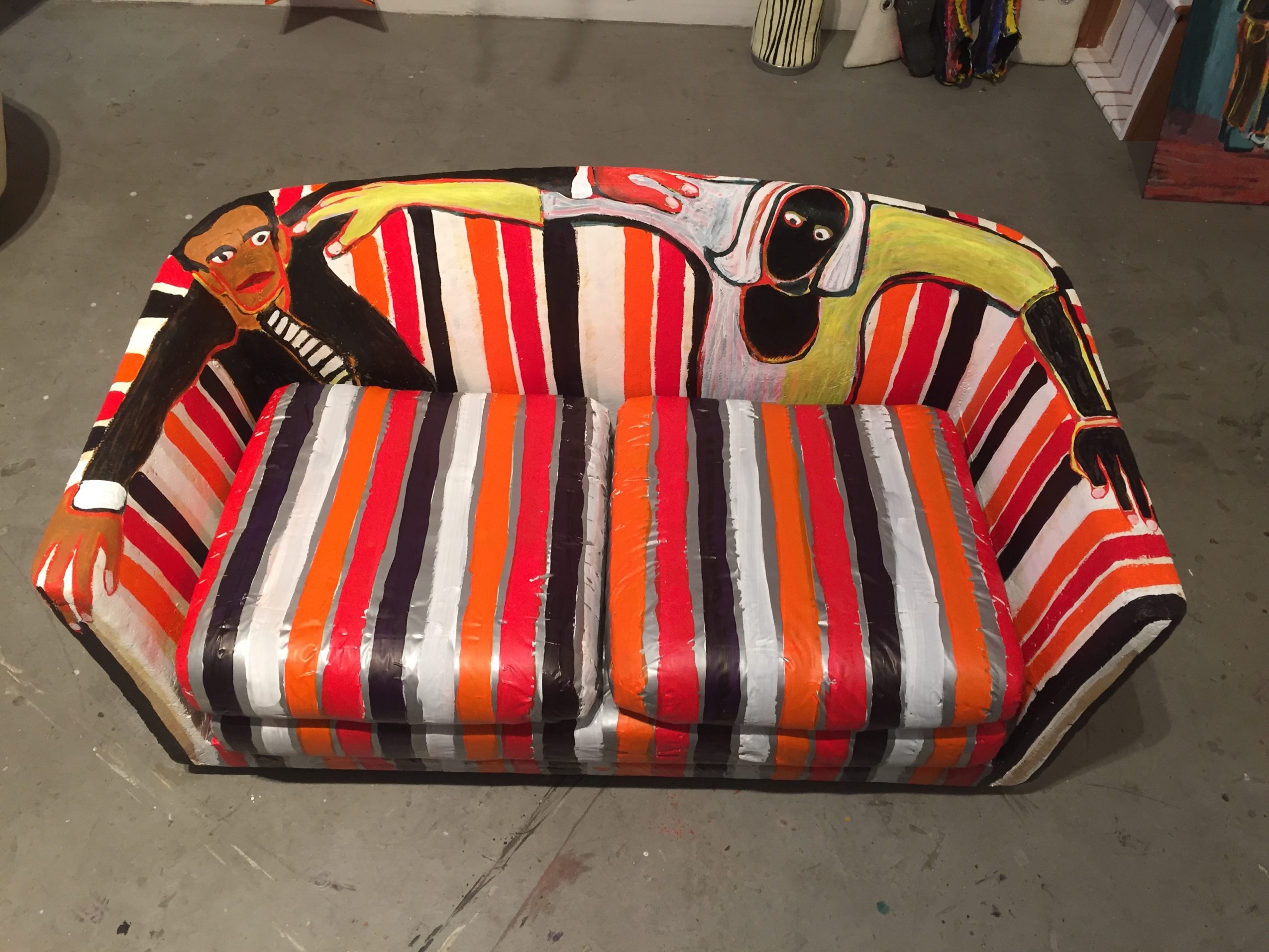 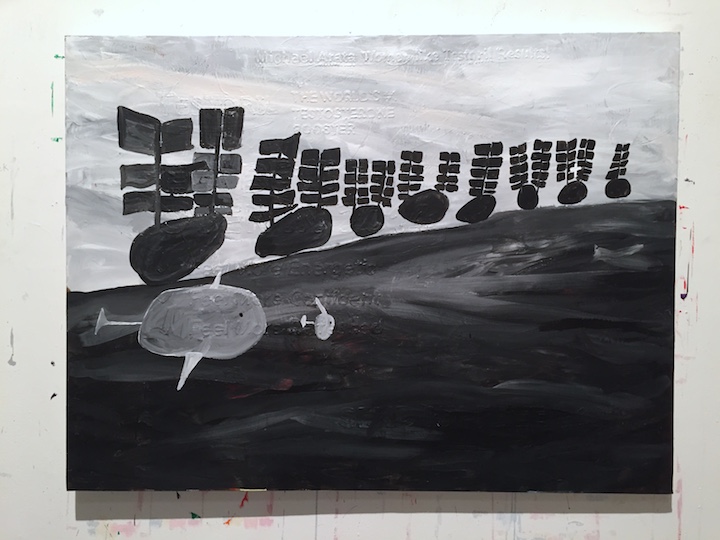 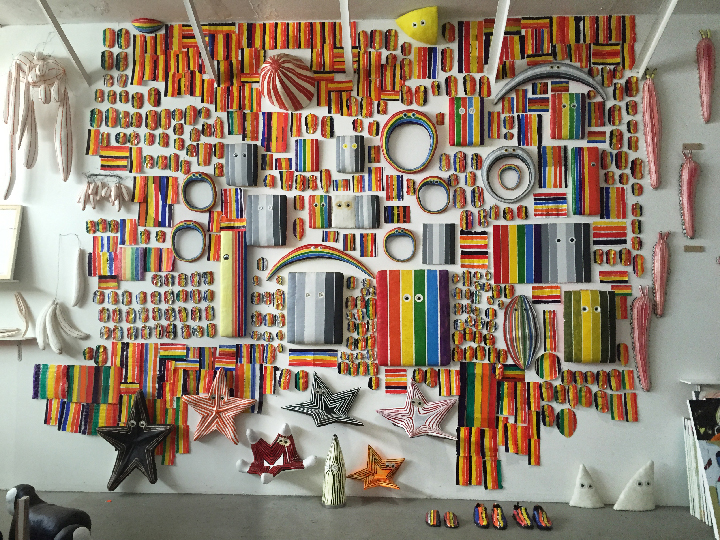 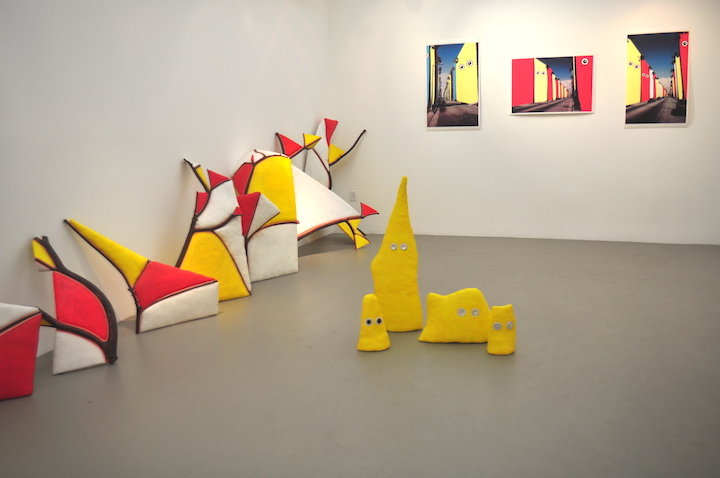 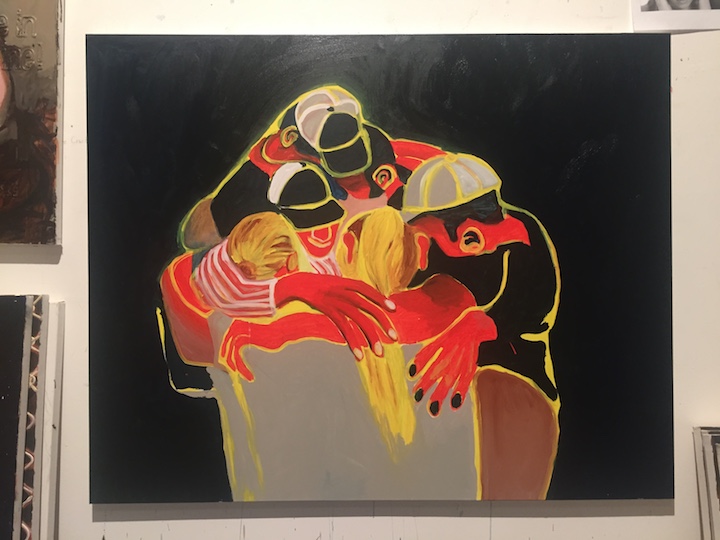