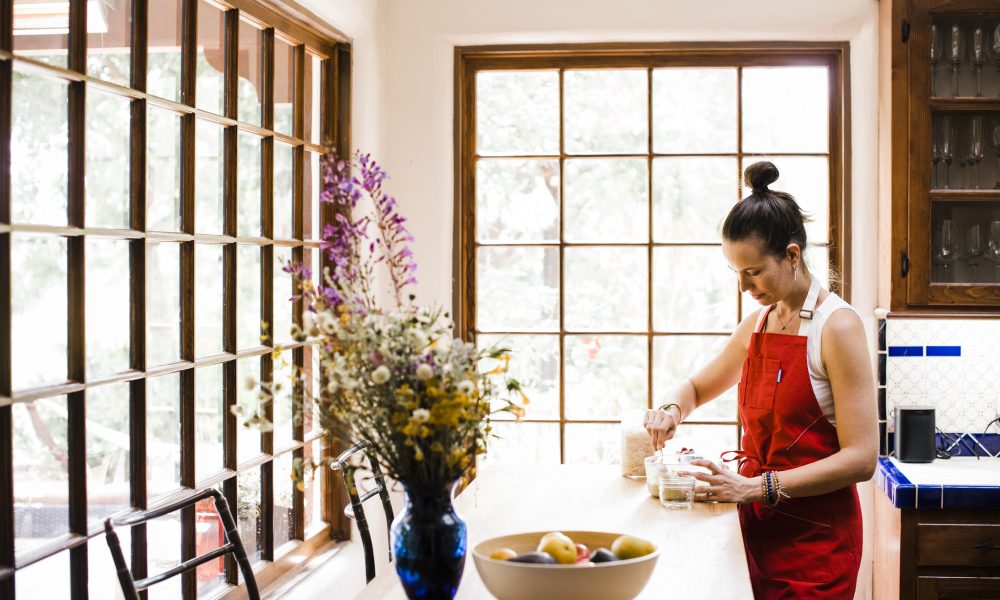 Today we’d like to introduce you to Meredith Klein.

Thanks for sharing your story with us Meredith. So, let’s start at the beginning and we can move on from there.
I had always loved cooking and grew up with very adventurous home-cooked meals inspired by many different global cuisines. I was raised with a belief that an academic path was the way to success, so I never considered a culinary career until my mid-20s. At that point, I had spent a number of years working in the corporate world and left my job there to pursue a PhD in Sociology at UC Berkeley. My year at Berkeley was perhaps the most miserable of my life (for reasons pertaining to the academic climate and culture), and two things really got me through that year: a steady yoga practice, and cooking for myself every night after I came home from campus. Before the start of my second year, I knew I couldn’t go back – to do so felt soul-crushing. So, a couple of days before the semester started, I decided to withdraw from school and set the vague intention to “do something with food and yoga.”

A few months later, I had met someone in San Francisco who hosted daylong yoga retreats in Sonoma County. She has previously done all the cooking (in addition to teaching asana and giving massages) and was very eager to bring me on as a chef for her retreats. We formed a great friendship and working relationship, and soon we were doing longer retreats together, and then the word spread and I started catering other retreats as well. During the first year of my business, I discovered the ancient Indian medical system of Ayurveda and became hooked on it right away. I began incorporating Ayurvedic food principles into my menus, as well as my own diet. I noticed how great I felt with this way of eating, and people at retreats noticed as well. I became a student of Ayurveda after my own initial experiences with it, and have studied at various schools over the past 13 years.

Today, catering retreats is still at the heart of what I do. I am passionate about providing food that accompanies people through the types of transformative experiences that happen when one is on retreat. In addition to yoga retreats, I also work with meditation groups, women’s groups and corporate groups as well. I host cooking retreats of my own, where people come together for a weekend to prepare food together mindfully and hone their skills in the kitchen.

Aside from the work I do with retreats, I also cater private parties, offer prepared meal delivery services, teach occasional cooking classes, and develop recipes and products for restaurants and food brands. I also work one-on-one with individuals as an Ayurvedic lifestyle coach, and I teach in a women’s Ayurveda school as well as various yoga teacher training programs around the country. In 2017, I published a cookbook called Kitchen Ritual: Recipes to Inspire the Art & Practice of Mindful Cooking.

As my business was developing, I concurrently cultivated a regular meditation practice. Two of my most influential teachers have been the Zen priest and chef, Edward Espe Brown, in the Bay Area and Thich Nhat Hanh, the venerable Vietnamese monk who brought his simple flavor of Buddhism to the West. In 2013, I was ordained by Thich Nhat Hanh into the Order of Interbeing, a community of lay practitioners in his Plum Village tradition.

Because of my training on the meditation cushion, mindfulness is at the heart of what I do in the kitchen. Unlike many chefs who find the kitchen to be a place of great stress, I use the kitchen as a place to slow down, pay attention and find a meditative flow to the work I do. People who watch me work always notice this, and I know this energy is reflected in the food as well, whether people are conscious of it or not. Through the retreats and classes that I offer, as well as my cookbook, I hope to inspire others to find their own sense of joy in the kitchen through basic mindfulness practices.

Overall, has it been relatively smooth? If not, what were some of the struggles along the way?
I feel pretty fortunate that the path of my career has generally been fairly smooth. I was lucky that when I first started my business, I was able to split my time between my newfound career and working with my former company. The hardest thing I’ve done along the way was to make the decision to put all my energy into my business, which I did in 2011 when I left the corporate world for good. I had a lot of fear and uncertainty about being solely dependent on my cooking to support my lifestyle, but I’ve been very fortunate to have had a very steady stream of clients over the years.

I did have one experience several years ago where I worked with someone to develop a product and then she tried to change the initial terms we had agreed upon when it came time to form her LLC after the product had already launched. That resulted in a lot of legal fees but also was an opportunity for me to stand my ground and to stand up for myself and not cave to sign something that would have restricted my future creative freedom.

Alright – so let’s talk business. Tell us about Pranaful – what should we know?
I am known for creating healthy food that tastes great and is inspired by cuisines from all around the world. Working with Ayurveda allows the foods I create to be very digestible, which people often notice when they are not used to eating this way.

With my private clients, I generally work with people who have very specific and often serious health issues. I am known for helping people find foods that leave them feeling good after they eat. As discussed before, I’m known for the sense of mindfulness and concentration I bring to the kitchen.

Any shoutouts? Who else deserves credit in this story – who has played a meaningful role?
The two teachers mentioned in the first question: Edward Espe Brown and Thich That Hanh for helping to ground me into my meditation and mindfulness practices. All of my Ayurveda teachers over the years, especially Dr. Robert Svoboda, who I’ve been fortunate to study within various capacities over the years. I completed a course with him through the Ayurvedic Institute in 2008 that really solidified my love of Ayurveda.

Many of the yoga teachers I’ve worked with over the years have helped me through the referrals and support they gave me – notably, Chrisandra Fox-Walker, the first teacher I worked within the Bay Area, and also Chaz Russ, who I met shortly after moving to L.A. in 2010 and have worked with ever since.

I’m grateful to the Kitchen on Fire culinary school in Berkeley, where I served as an apprentice for a couple of years, and got to learn from some amazing Bay Area chefs. I assisted the knife skills class there many times and am grateful for all I learned in that class. My husband Francis has been a great champion of my cooking and my business, and he has helped me become more solid in a lot of the back-end parts of my business (legal structures, contracts, accounting, etc.) 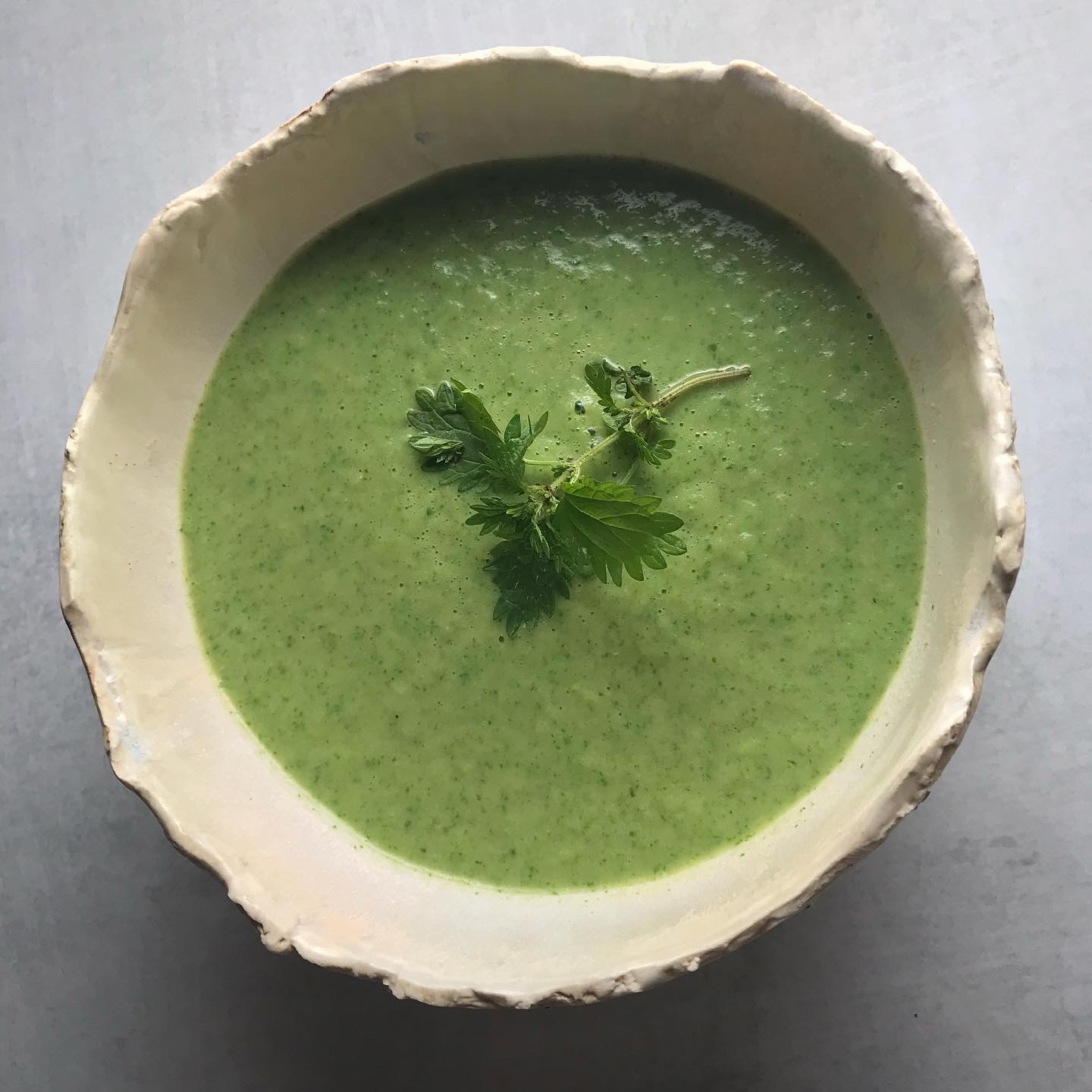 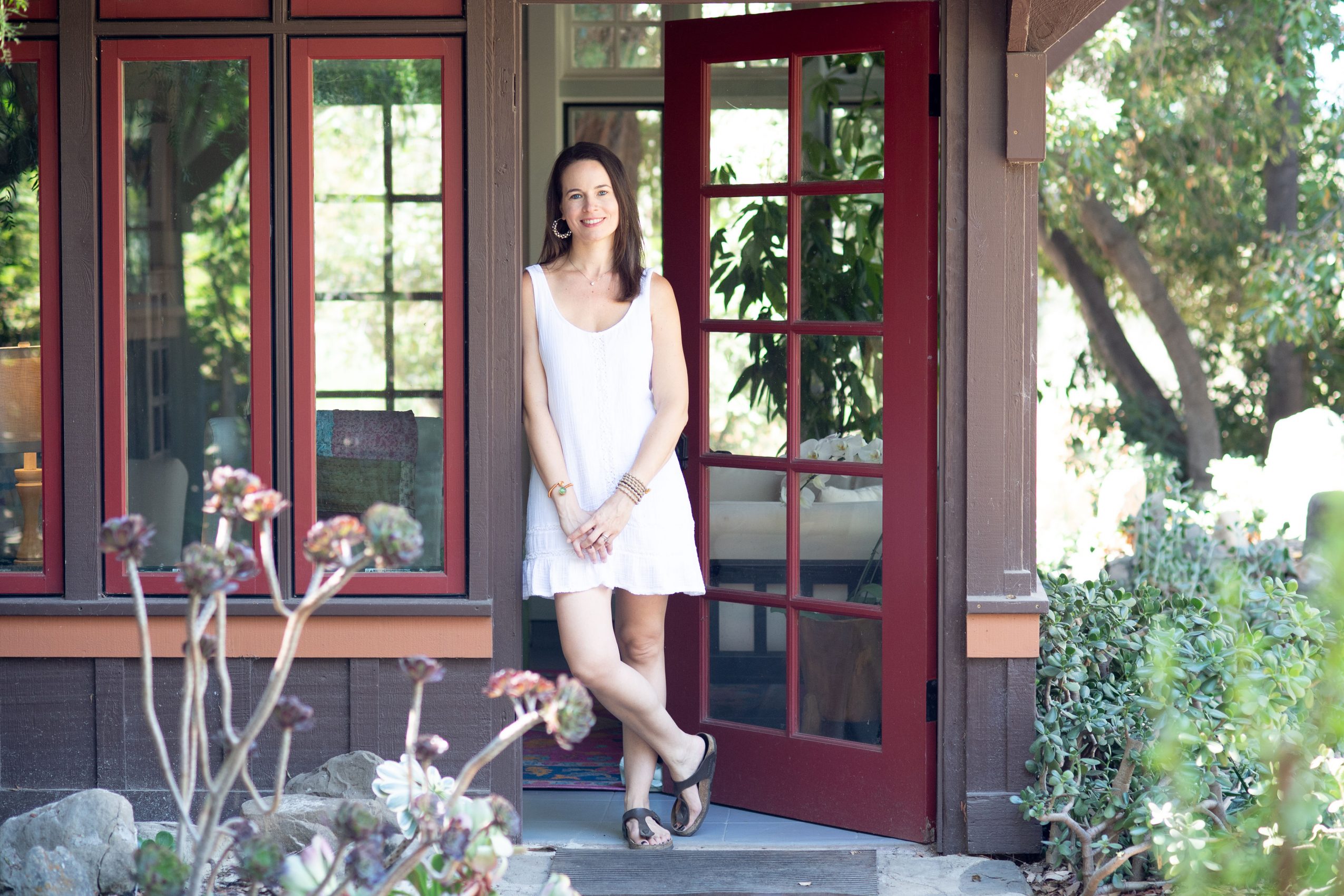 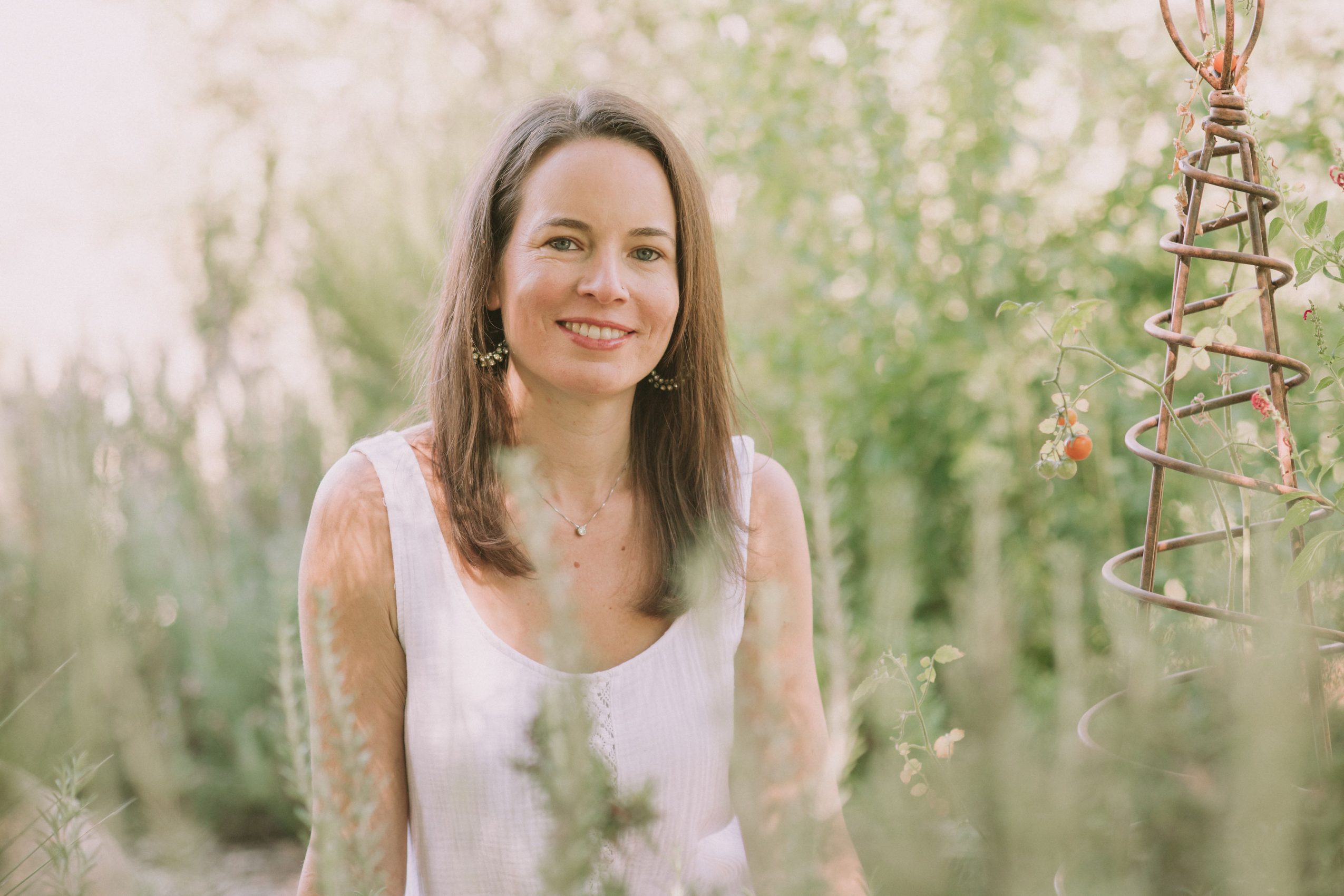 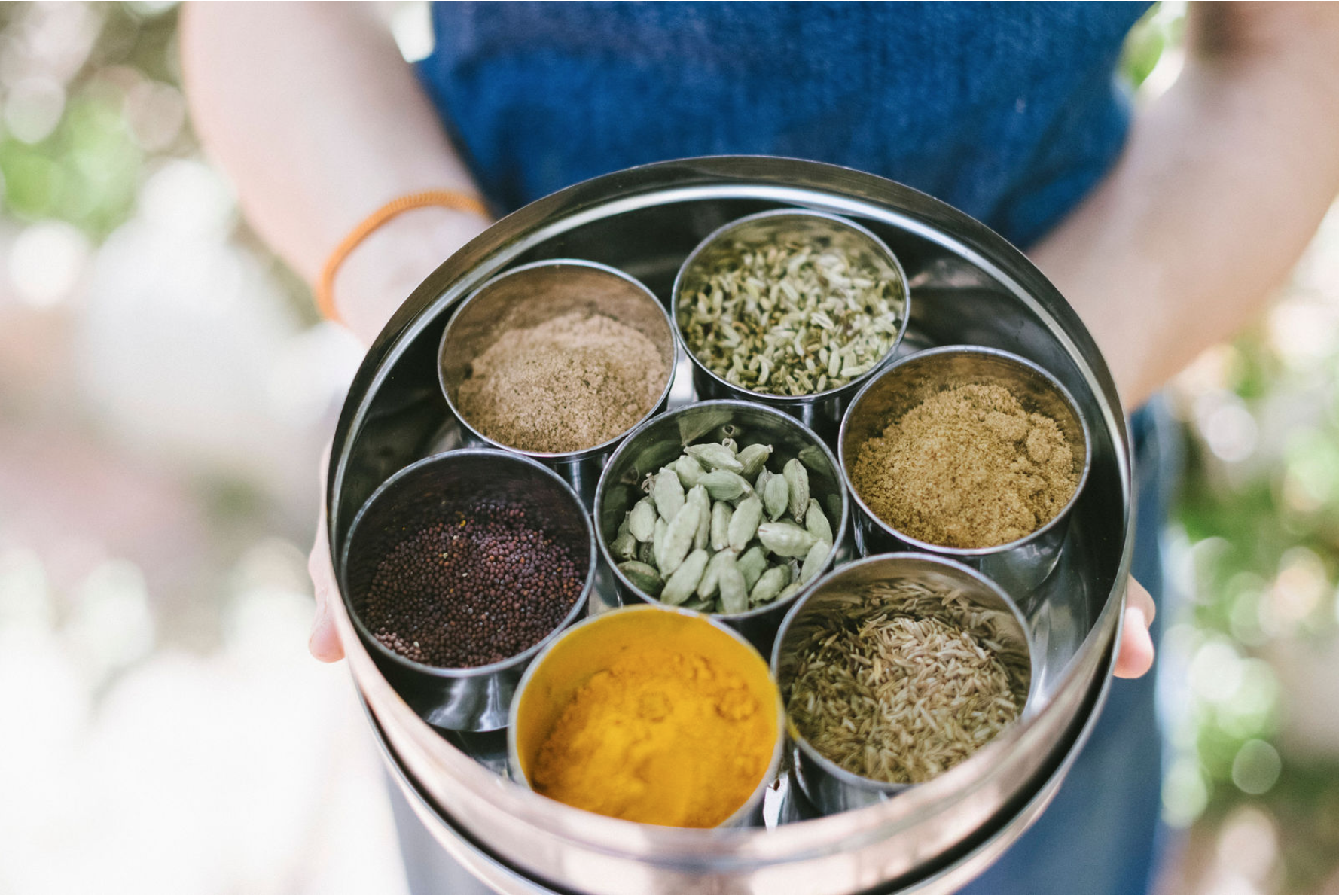 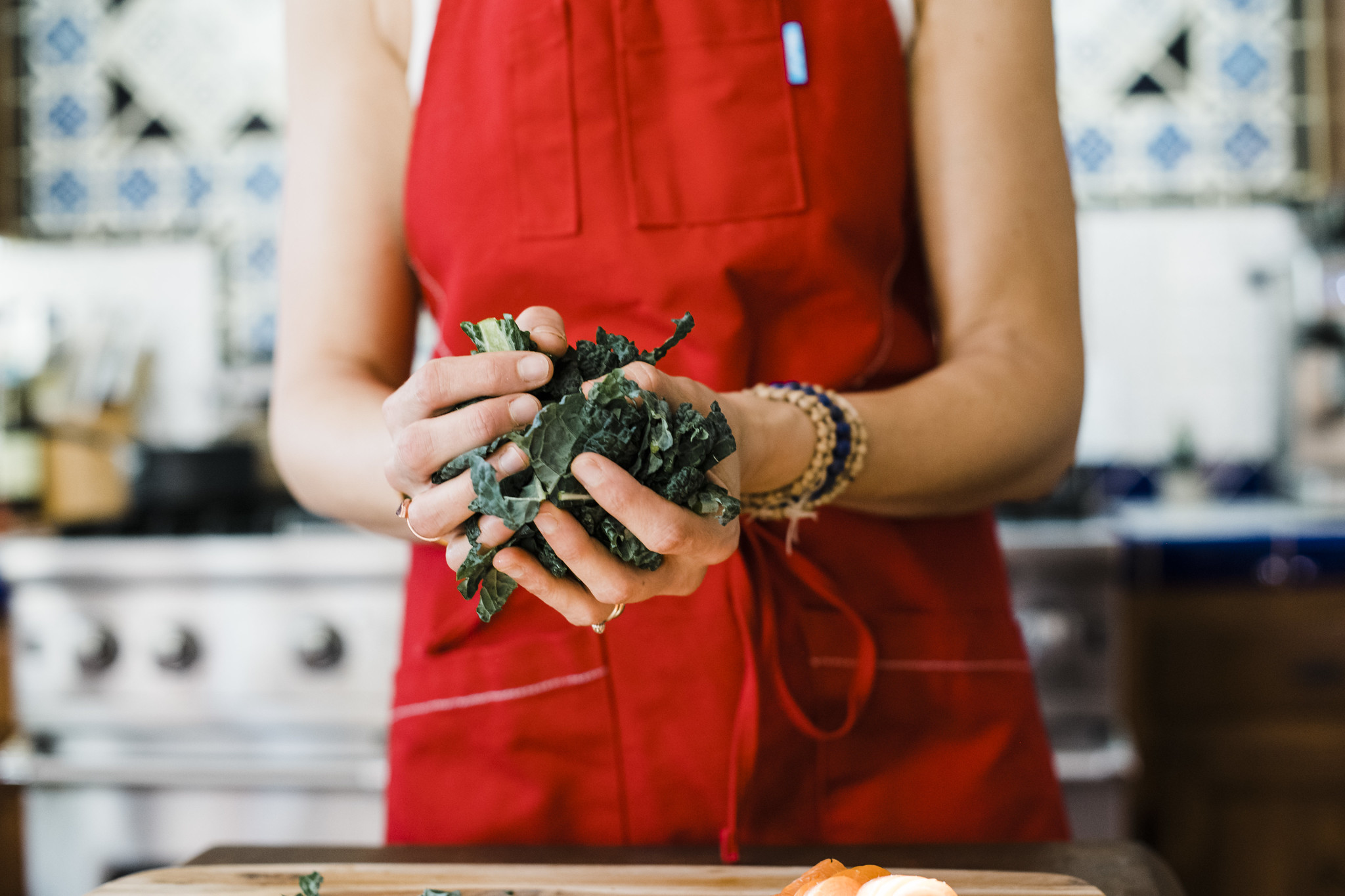 Image Credit:
The photo of the spices with my hands, as well as two with red apron are by Anastasia Chomlack.
The one by the doorway, and the one with the plants are by Mariana Schulze.