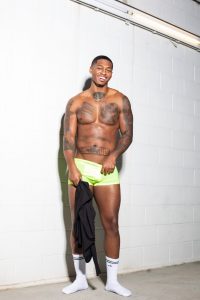 Today we’d like to introduce you to Maurice Lyndell.

Maurice, can you briefly walk us through your story – how you started and how you got to where you are today.
Coming from where I come from Detroit Michigan the journey was not easy and LA was nothing but a dream…until I made it happen. I originally moved to LA to pursue my passion for a football career. I was attending a community college doin the juco life tryin to go D1 then to the league (NFL) but during that time, I started having thoughts that my window was closing on that.

My passion was dying that and I was scared because that was all I knew, I thought that was going to pave the way for my family and future kids. Then reality came during our scrimmage a week before the season to decide depth I hurt my shoulder sidelined 4-6 weeks. That killed me inside because I had already arrived late and started to compete for spots. During that time is when I made the switch, I told my mom and family that I wanted to be an actor an a model and that I was goin to quit ball and school. They advised against it at first and wanted me to come back home but I didn’t want to I had something to prove plus a lot of people gave up on me which hurted but I turnt that pain into fire. I saw something here and just started talking to myself saying things like why not me? That’s when I decided to make a new lane a lane where gps wasn’t needed just god&faith. It started off tuff because I had no idea what to do or how to get started so I just submitted for all types of gigs that would come my way nothing major just work and used it for networking. During that time, I met a guy named E mills casting director he gave me my first real shot and we instantly made a brother type bond. With e mills, I was able to work on two big leads one with tink-different and Normani – motivation.

As far as acting and everything what changed my whole career and sparkled was my acting teacher but she’s more like my auntie /mom in LA was casting director Phaedra Harris. I joined her class the audition lab. She got me right before her I was lost and going through a lot I didn’t have my look right and was just all over the place. Truth be told I was homeless for a while because my lease at my old AP was up and had a tuff Time finding a new spot and roommates. During her class I met some people I consider family now and that was big for me because I don’t have family out there. After a few sessions, I was goin hard tryin to find a model agency. I wasn’t having any luck until I decided to send pics to my current agency DT model management and they hit me right back I was shocked but excited. My agent Ricardo and David Todd decided I was the right fit for the brand. With DT, I had the chance of working Asos a major brand in London and is now one of their main models out there. Bigger things are on the horizon.

We’re always bombarded by how great it is to pursue your passion, etc – but we’ve spoken with enough people to know that it’s not always easy. Overall, would you say things have been easy for you?
I wish it was smooth road but no you get told no a lot before you finally get a yes I’m still learning to deal with it. Like I mentioned before, I had a lot of self-reflecting moments and could have easily given up packed my bags in went back home especially when I got homeless. Which was crazy to me cause I never thought I would experience that I mean I come from poverty but sleeping in cars breaking into my old apartment some nights and showering at the gym are just things I didn’t see me ever doin. I could have went home and avoided it but I stuck with it the apartment was harder in taking longer than I thought… LA is just different.

We’d love to hear more about your work and what you are currently focused on. What else should we know?
I act and I model I specialize in looking good And being entertaining lol…I’m always at the gym working on getting better. Some of the things I’m known for are “the hot guy “ “words from award-winning Dave Meyers” in Normani’s hit song motivation or you may know me from IG or some even a model for Asos. What’s sets me apart from others is my confidence You can see it you can feel it when I walk in the room it’s all eyes on me; I got star power I know you it, you know it the world knows it but I’m also humble at the same time which makes it more special.

What were you like growing up?
I was quiet, shy I like to observe a lot before I even speak usually, but I also had a temper. I got into a lot of fights but that’s because I used to get tried a lot because I guess if you look good people think your soft or easy to step on but I’m so far from that it’s not even funny lol. I was the kid always smiling into sports very active.