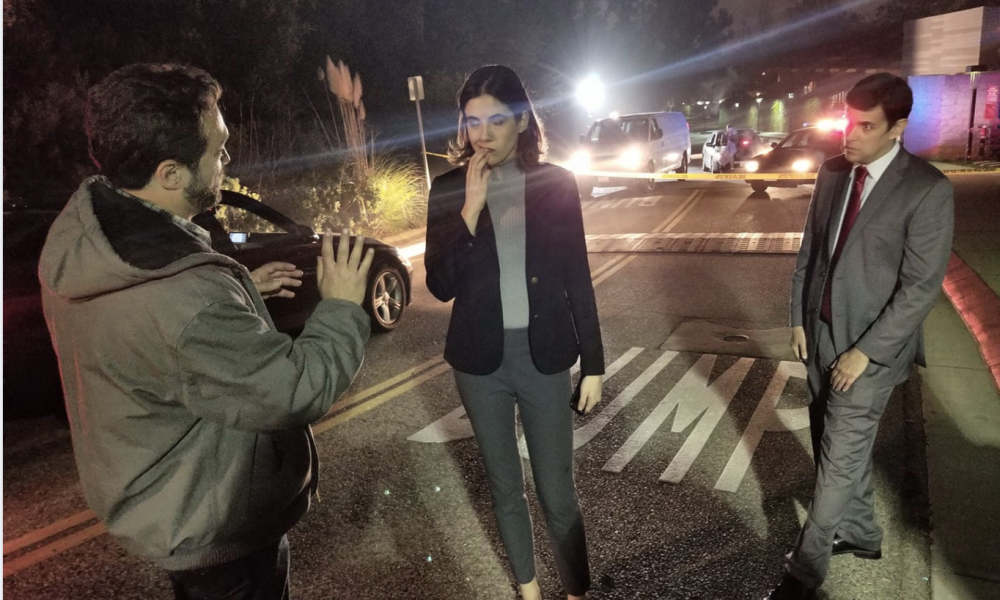 Today we’d like to introduce you to Matthew Johnson.

Matthew, let’s start with your story. We’d love to hear how you got started and how the journey has been so far.
My path to becoming a filmmaker was pretty circuitous. I grew up a Navy brat and my family leapfrogged around the world the first half of my childhood. It was really when we lived in Japan that my love of films took shape. I was seven and eight years old when we lived there and on base we had an old majestic-style theater called The Benny Decker where it only cost 25 cents to see a movie. My parents gave me $5 a week back then, ostensibly for school lunches, but really that bought me a whole lot of visits to The Benny Decker. With so many people living very far from home, that movie theater was one of the central hubs that held together this very diverse community of people. It was probably our strongest tether back to American culture and I loved seeing films there with my friends and family.

Fast forward about a decade and I am a senior in high school, trying to sort out what I wanted to study in college and all I knew for certain was that I enjoyed watching films more than just about anything. My family never owned a camcorder and I never had friends growing up that wanted to make backyard films. So I had no film reel to speak of, but I still wanted to apply to the biggest film schools in the country. When I convinced my parents to take me to NYU for a visit to Tisch, we sat down in Washington Square and had a heart-to-heart. Paying for private school tuition, New York City costs of living, plus the expenses of shooting films was more than we could handle and they suggested to me that if I really wanted to be a filmmaker, that I explore my other interests as an undergraduate, and go back to film as a graduate student after I’d learned more about what really drives me intellectually.

Fast forward another 15 years and I am now a print journalist, covering policies that the U.S. Congress is debating, voting on, and passing. By the end of the aughts, print journalism was an incredibly precarious profession to be in, even at a profitable newspaper, like the one where I worked. My good friend from Northwestern University had come onboard as our paper’s first video journalist and I started to piggyback on whatever projects he was doing on which I had time to help. I could feel where the wind was blowing and needed to evolve my storytelling skills. When I took my next job as a multimedia storyteller at the Urban Institute — a non-partisan policy research organization — I convinced my boss to put me through George Washington University’s Institute for Documentary Filmmaking so that we could make short docs to emotionally undergird the quantitative and qualitative research produced by the institution’s world-class academics.

The experience I had at GW and the film that we made reawakened my calling to cinematic storytelling. Myself and six other filmmakers shot, cut and edited Unsettled, a 23 minute short about a policy that then-Washington D.C. Mayor Vincent Gray enacted to try to move homeless families out of the district. At the time, there was a huge controversy about the fact that Gray and his administration were housing more than 2,000 homeless people in a defunct, rundown hospital. When this got exposed by the local media, he responded with a policy called 500 Families, 100 Days, which he said would move all the people living in D.C. General into apartments. It all sounded great in his speech, but when you took a good look at the details of the plan, it offered homeless people four months of subsidy but would leave them on the hook for eight more months of market-rate rent. They were being set up to fail and our movie shined light on the policy’s flaws. Unsettled made a decent film festival run, but it was really when then incoming Mayor Muriel Bowser had us screen it for Department of Housing Services officials that I knew I had to permanently change what I do for a living. It took me three years to get the nerve to blow up my life in D.C., but I eventually did it and moved west to attend UCLA’s prestigious graduate film directing program.

Overall, has it been relatively smooth? If not, what were some of the struggles along the way?
By far, the hardest thing was uprooting my life and career in Washington, D.C., and moving to Los Angeles. I’d spent 15 years building to where I was in my career and life and I knew coming out West meant discarding the relative stability I’d worked hard to create for the chance to pursue a more fulfilling life as a filmmaker. And it wasn’t just my livelihood that was affected by this decision — my wife was also coming along for the ride, which meant she had to convince her employer to let her move and work from across the country. Thankfully her employer is very cool and had another office in Pasadena where she could work. Nevertheless, I have to give her a ton of credit because it was every bit as hard for her to make the move as it was for me, if not more so. And I would not be here if it weren’t for Natasha. When I started to get into some choice film programs, I had a ton of doubt about whether this was a smart choice, selfish, something I should do, etc. But when she heard me muttering such things, Natasha rightfully told me that I would really punish myself during my golden years if I let this chance slip through my fingers. I really owe her on an infinite number of levels and will be forever grateful for her confidence and her willingness to ride the rollercoaster with me.

Since coming to UCLA and through the first three short films that I’ve directed here, it just gets better and better. I thoroughly love the process of filmmaking from screenwriting to pre-production, all the way through post and all the collaborating that happens in the middle. To be sure, there have been moments when it feels like I am dying on the inside when something is not going right in some stage of the process, but when the movie is finished and it rolls on the big screen, I always feel great satisfaction and pride in what we made and then all I want to do is start over and make the next one! That part feels smooth.

We’d love to hear more about your work and what you are currently focused on. What else should we know?
Something that sets me apart is that I spent 15 years as a journalist and multimedia storyteller listening to and building trust with people from all walks of life. I taught myself how to engage with people as they lived their lives; I heard about what happened to them; and watched as they took action to overcome something. The countless interactions I had with people in my previous work informs the humanity I want to invoke in my films. Like journalism, I see filmmaking as a way to explore the world. And the life I’ve led helps me to bring empathy, earnest curiosity, and dogged research to the stories I develop, write, cast, and direct.

At the moment I am simultaneously putting the finishing touches on the first two shorts that I helmed at UCLA while also going into pre-production on my thesis project. My first short — The Gaffe — is a political drama that explores what happens when tragedy strikes and a conservative politician is forced to choose between listening to his emotional truth, or adhering to the rules of the game.  My second year film — Faro — is based on real stories that have emerged in recent years on the southern border, particularly in the Prieta Cabeza region of Arizona. In the film, we follow Angie, a traumatized humanitarian who ventures into the desert night in search of three lost migrants, hoping she can find them before they disappear in the elements. Both films are about to get a final sound mix and then out onto the festival circuit.

Meanwhile I am preparing to make Solastalgia, which is the story of a career oceanographer who’s forced to grapple with the true purpose of her work when her mentee threatens to defy gag orders and expose everything. Making a film during this pandemic is very challenging, especially on a micro-budget level. But embracing constraints and limitations breeds lots of creativity and I am really excited for all that lies ahead.

What is “success” or “successful” for you?
Success can be differentiated into short-term and long-term goals. Immediately speaking, success for me would be figuring out how to adapt my thesis screenplay — for which I was awarded an Alfred P. Sloan Foundation Fellowship — to safely shoot with my best collaborators and friends during this pandemic that is upending our industry, country, and the entire global community. The good news is, I recently got back from shooting my good friend’s thesis feature, where I served as producer and assistant director, and I learned an immense amount about how to organize and execute a successful student film production during this public health crisis. Now I need to take all I gleaned from that shoot and reexamine my script with all that useful knowledge and experience in mind.

Successfully making my thesis film an evocative piece that powerfully speaks to one of the most important yet underappreciated conflicts with which we are living — the dangers we all face when scientists are censored and attacked for telling the unvarnished truth — would be short-term success to me. I can’t think of a more important time for this story to exist. Beyond this project being the calling card I will put myself into the professional filmmaking world with, I owe it to incredible scientists— such as Michael Mann, Anthony Fauci, Sylvia Earle, and most especially Nick Bond, who gave me countless hours of his time and advice as I wrote this screenplay — because they push their discoveries even under duress, because science is also a matter of public safety, if not a planet saving endeavor.

And in the long run, success to me would be simple: generating enough demand for my skills and taste to keep myself creating and working on cinematic stories that engage audiences, but also challenge them to think about the complexities of life and the human condition with a critical eye. If I can do all that while keeping a roof over my head and food on my table, I will be a happy camper. 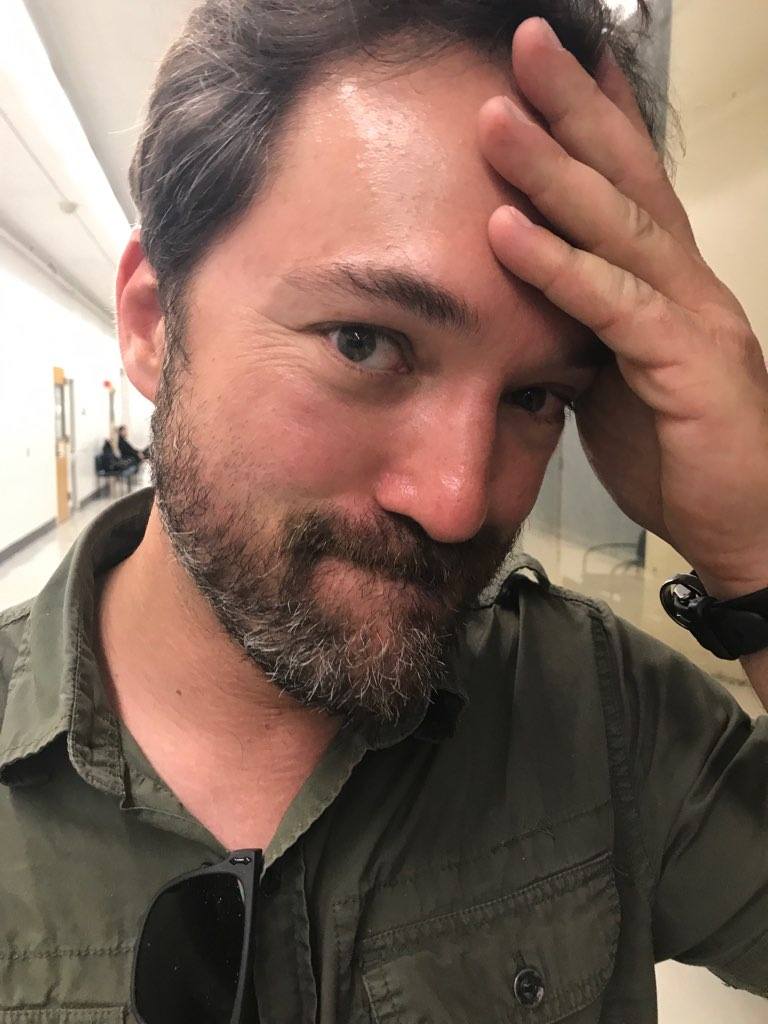 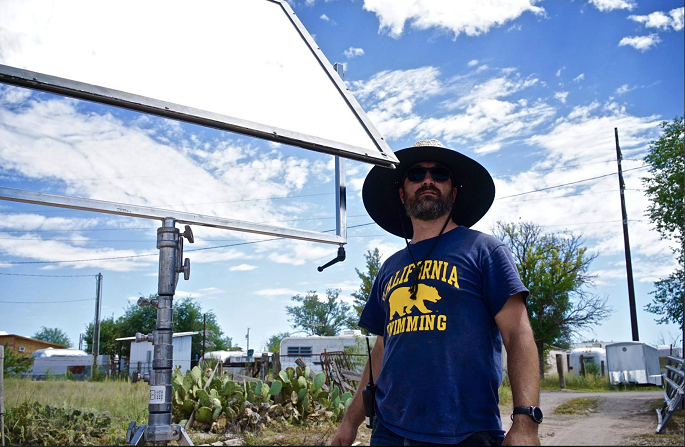 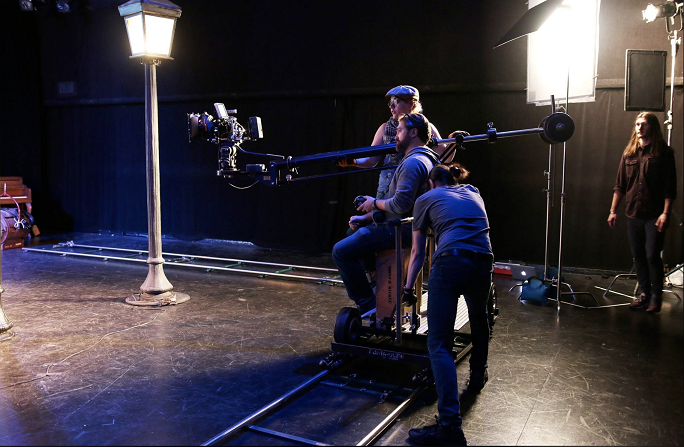 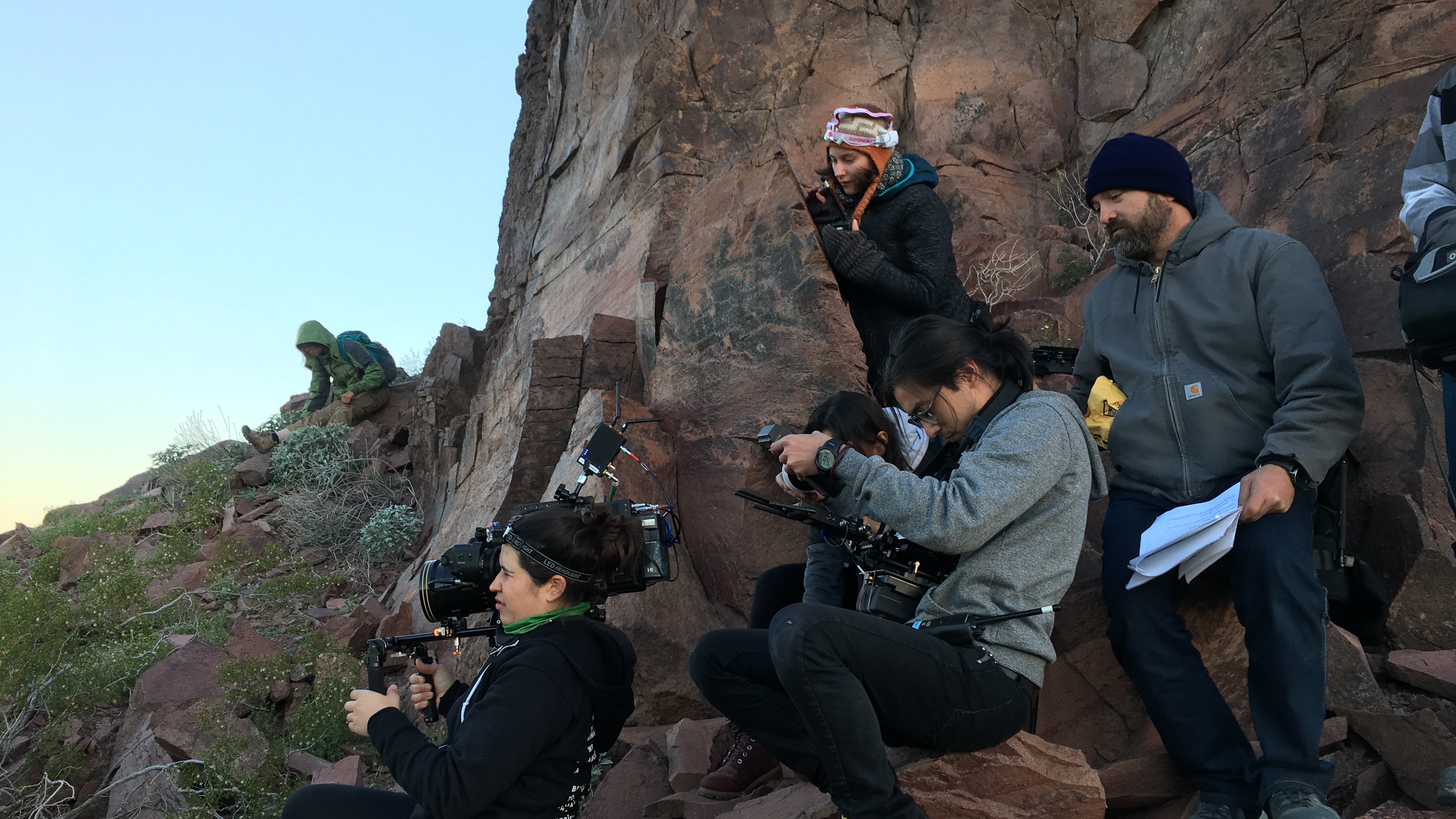 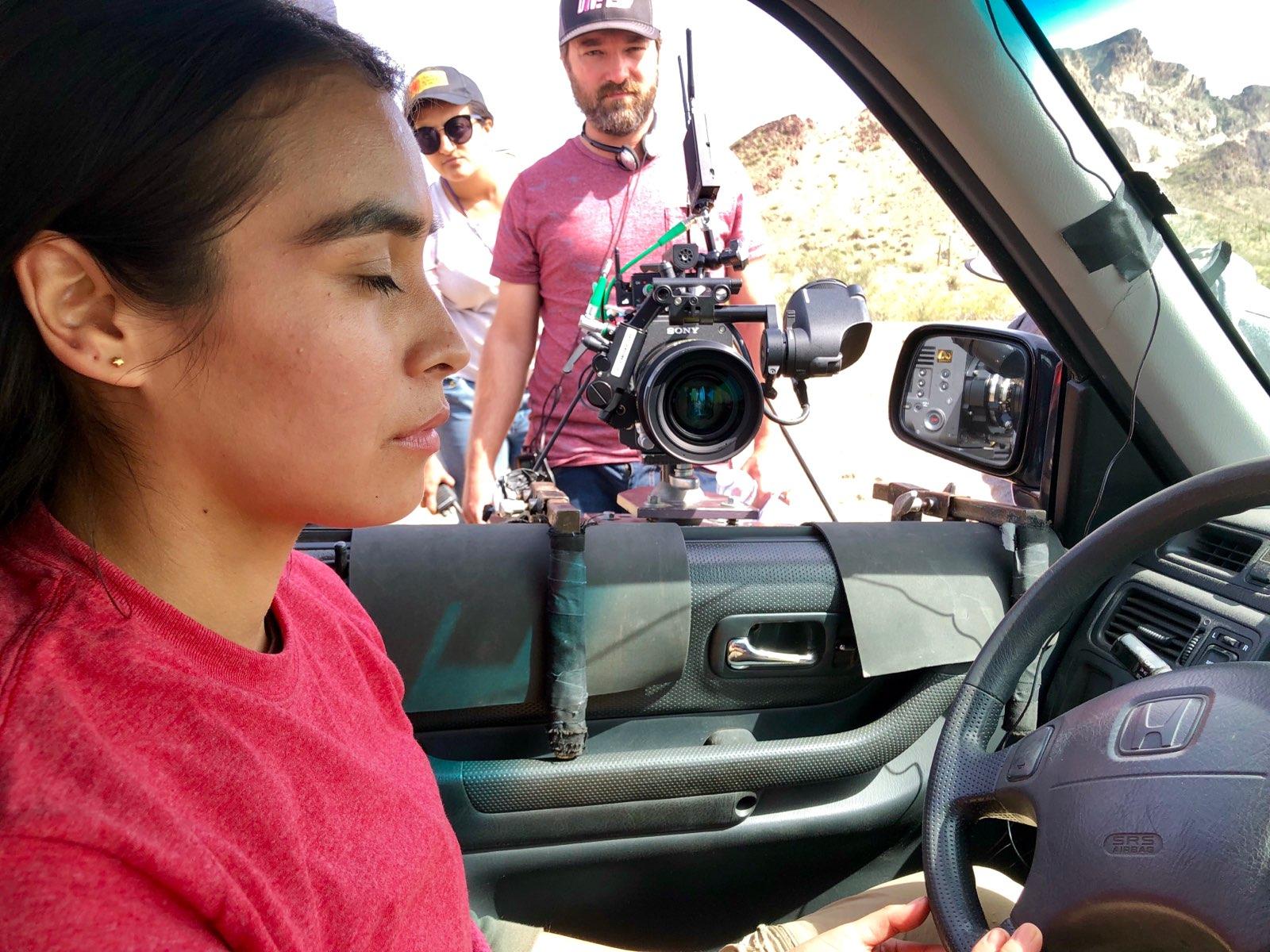