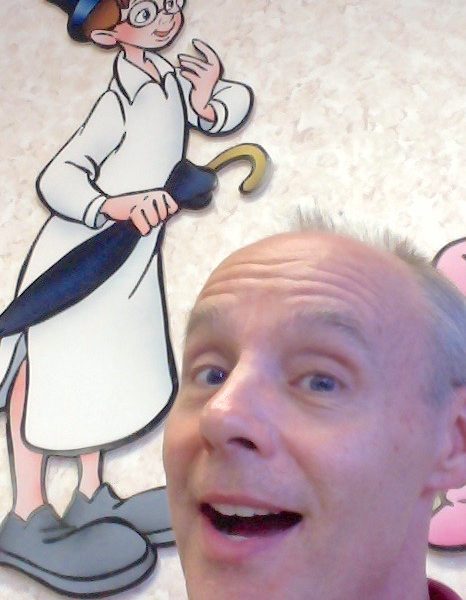 Today we’d like to introduce you to Martin Turnbull.

Martin, let’s start with your story. We’d love to hear how you got started and how the journey has been so far.
The business was originally started by Bob Molinari in 1980. A couple of years before that, he found a set of six dwarfs from Walt Disney’s “Snow White and the Seven Dwarfs.” They were cute and colorful and he figured they’d brighten up his apartment. He didn’t mind that the set lacked Dopey and figured that sooner or later he’d go out to find the Dopey that completed the set. The very next day he went out looking and a Disney collector was born.

Fast forward to a few years later when his Disney collection had swelled to fill the whole apartment, he figured “If I’m into this kind of stuff, other people must be, too,” and decided to open a store that only sold Disney collectibles and memorabilia.

He opened a store on Melrose Ave in February of 1980 to a chorus of “What? He’s just selling Disney? That’s all? He won’t last!” But Bob’s instinct was right on the money and within months word started getting out that there was a unique store on Melrose that Disney collectors could go to. He was featured in magazines and guides to Los Angeles and business bustled along.

By the late 1990s, the idea of shopping online had taken hold. Everything we sell is easily shippable so in 2000, we debuted our website: www.FantasiesComeTrue.com – we now have nearly 15,000 items on our website and these days it accounts for over 90% of our business. Our clients went from “whoever walked past the store” to “anyone who lives anywhere in the world that the US Post Office ship to.” When our Melrose Ave store was sold to a French company, we moved our store to the Tujunga Ave strip in Studio City – local collectors still need somewhere to go and view the selection of our items in person! Our hours are Wednesday through Saturday, 12 noon to 3pm, or by appointment.

Has it been a smooth road?
The first year was definitely the hardest. The concept that a store would specialize in such a narrow niche was hard for people to get their head around. Remember, this was the early 1980s – a full 7 years before the Disney Stores opened their first store. Collecting Disney wasn’t nearly so widespread as it subsequently became with conventions and swap meets and eBay and online forums. But once word got out that there was a place where a Disney aficionado could go and find something to add to their collection, the store took off.

So, as you know, we’re impressed with Fantasies Come True – tell our readers more, for example what you’re most proud of as a company and what sets you apart from others.
We are a highly specialized company in that we only stock items (figurines, pins, keychains, memorabilia) that have been officially licensed by the Disney company. If it isn’t Disney, we’d don’t stock it! Mind you, we’re talking about the ever-expanding Disney universe here. Every year, Disney comes out with a new movie – and sometimes Pixar does, too – so that means a new Disney princess, and/or hero, and/or villain, and/or side kick, and/or quirky character. So, when we say we’re “Disney only,” it’s still accurate, but that now encompasses a lot of movies. And we don’t stock anything from Marvel or Star Wars. We’re focused on the feature animation side of things, including some television, and side lines such as Muppets. We’re most proud of the fact that we’re the world’s first and oldest Disney-only store. And in this age of big box stores, super-chains, and national franchises, we’re still around and still thriving.

Let’s touch on your thoughts about our city – what do you like the most and least?
Los Angeles offers something for everyone. Whatever you’re into, whatever you’re interested in, you’re likely to find a store or social group or organization or publication that caters exactly to what piques your interest the most. Plus, of course, there’s the weather. It’s pretty unbeatable. But we pay a price for that – the traffic. You’d be hard pressed to find an Angeleno who doesn’t groan at the thought of having to negotiate LA traffic.