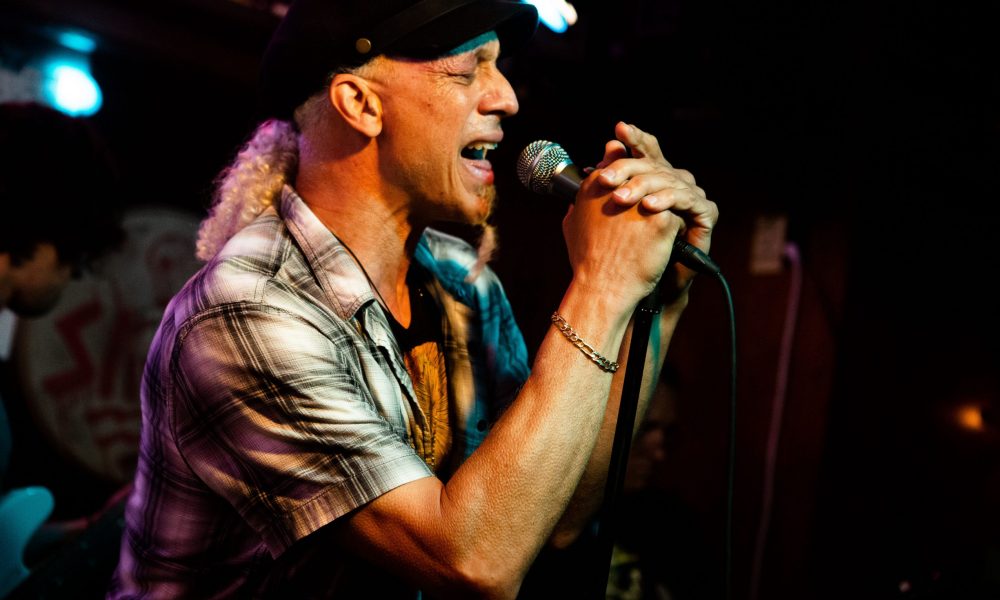 Today we’d like to introduce you to Mark Prudeaux.

Mark, can you briefly walk us through your story – how you started and how you got to where you are today.
I was reintroduced to Pete Sarenana, Carry-On Band’s founder, around 10 or 11 years ago. A mutual friend was getting married and wanted to reunite a popular high school band to perform at his wedding. Pete’s place was the designated rehearsal studio. Pete and I had gone to the same high school and had many friends in common though we didn’t know each other very well. I asked Pete if he was using his studio for recording as well and he informed me that he had some original material he was working on. I volunteered to lend my voice to any tracks he might want vocals on and he suggested that I should drop by sometime. “If the gate’s open we’re here rehearsing. Just let yourself in”. Since we lived within 10 minutes of each other I found myself driving past the studio often on my way home to see if the gate was open. After several unannounced visits I was toasted into the band with a shot of Pyrat rum. I’ve been the lead singer and front man for Carry-On Band ever since. With Pete on guitar and Adam Ponce on Drums, together we’ve contributed to local and national charities, received national recognition from United States Congress, mourned the deaths of past band members, and collaborated with renowned producer Simon Phillips on our upcoming release No Time for Warning.

Great, so let’s dig a little deeper into the story – has it been an easy path overall and if not, what were the challenges you’ve had to overcome?
Before I was in the band, Pete had collaborated with another high school classmate, Issac Avila, to form Carry-On Band. They had decided to name the band after Pete’s cousin Ray Carrion who had unexpectedly passed away in a motorcycle accident. They changed the spelling to reflect the Idea that Ray’s memory would Carry-On in their music. Issac and I were friends in school as well and had even played together in different bands. Not long before I met Pete, Issac passed away as well. Due to my experience as a graphic designer and illustrator, when Pete told me the story of Ray and Issac, I decided to create a logo for the band incorporating Ray’s image with a devils tail tilting an angels halo — reflecting the idea that none of us are either all good or all bad and yet deserve to be remembered by the ones that love us. But that wasn’t the end of our losses. Bass player Rik Cruz succumbed to cancer on June 28th, 2014, Ironically the same month and day as the loss of Ray Carrion six years earlier. Since the loss of Rik Carry-On Band has had Five different bass players and two second guitar players. Now, with the addition of Jesse Silgero on bass and Ruben Reza on the second guitar, the band feels complete.

We’d love to hear more about your music.
Carry-On Band is a multi generational group. Our members range in age from mid twenties upward several decades. Yet we all relate to the music from a similar perspective. This type of music is important to us all. We are preserving it, creating it, sharing it as a way of expressing our lives and cultures. Our untold stories are embedded here, as are those who have come before us and are likely to come after. We look for those that share this commitment to the movements that music supports. Be it charity, community, or social revolution, our soundtrack is one that inspires and energizes people to put themselves forward and accomplish something. It brings us together with other bands and artist that are driven to do the same. The details are important to us. A good song will interweave parts, melodically harmonizing and rhythmically overlapping to create a delicate and complex arrangement that has a subconscious effect.

This effect can bring you to a place of inspiration or comfort or even cause you to remember a time that you had long forgotten. Yet, live music performed on instruments isn’t as valued as it was several years ago. The tactile experience is slowly being replaced in this digital age. That’s not to say anything negative about digital music. It’s only to share the physical experience of the resonating vibration of a string or drumstick beneath your finger or in your hand. We want desperately to keep this experience alive and pass it forward. I know the question was what sets you apart from others. But the point is we don’t want to be set apart we seek to bring together.

What moment in your career do you look back most fondly on?
It would be not very easy to select one moment to call my proudest. The moment that my colleagues decided to trust a collaborative process to me as their spokesman and representative of their art. Art represents a significant part of who they are. That certainly rises to the heights of one of my proudest moments. The moment that Pete’s aunt Linda chose to give me a ring that symbolized her appreciation for the memorial depiction of her son in the Carry-On Band logo is another moment of pride. But if I have to choose one, then I suppose it would be watching my bandmate Adam Ponce get the opportunity to collaborate with his single lifelong inspiration and iconic drummer, Simon Phillips, during the recording of our album No Time for Warning. To watch their relationship pivot from icon and admirer to best friends and confidants over a short period of time. To capture some of their early experience of the process on video and edit a YouTube clip that has now been shared and viewed over 10,000 times — inspiring other drummers to experience, vicariously, the excitement and opportunity of a dream come true. 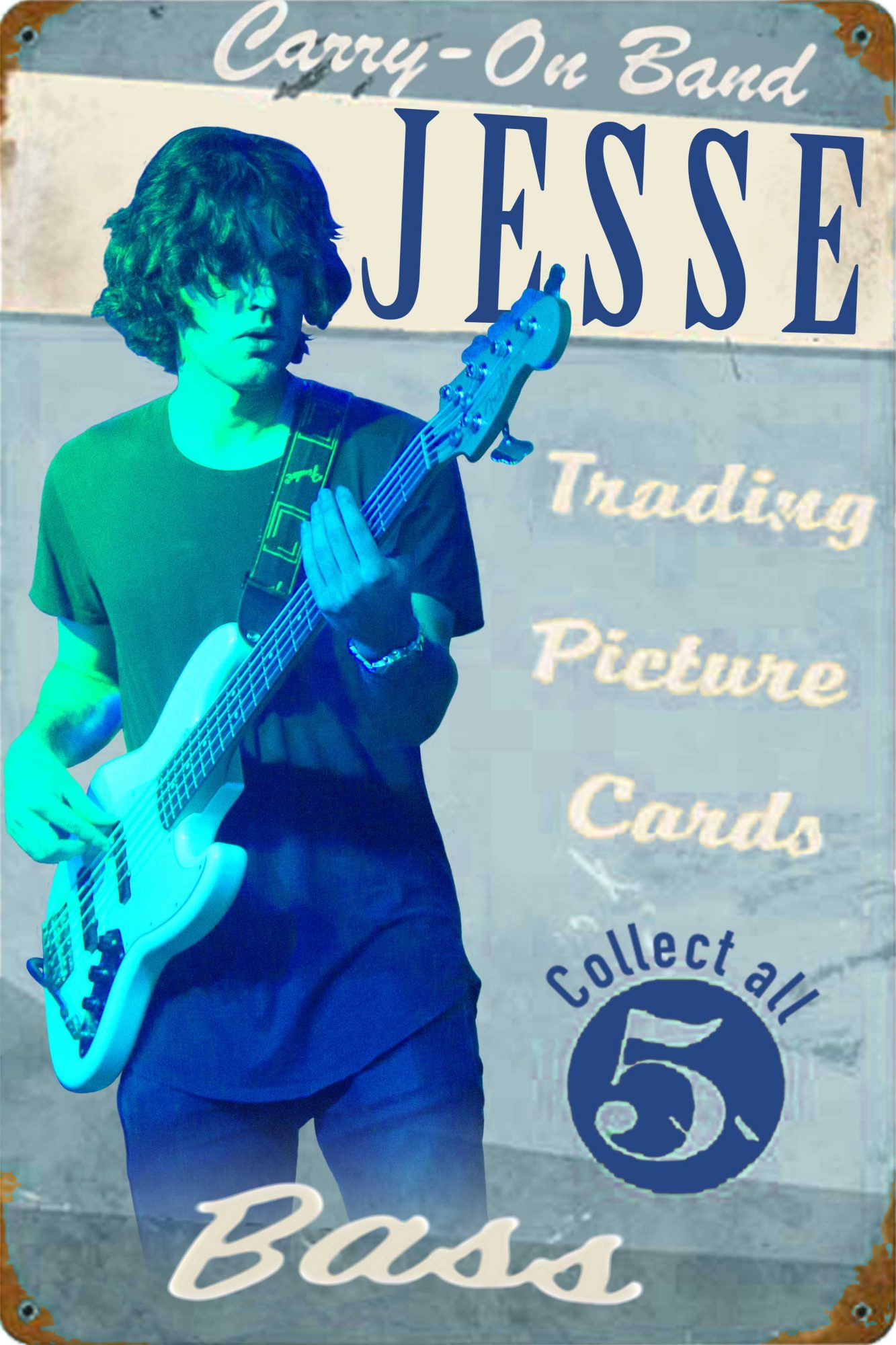 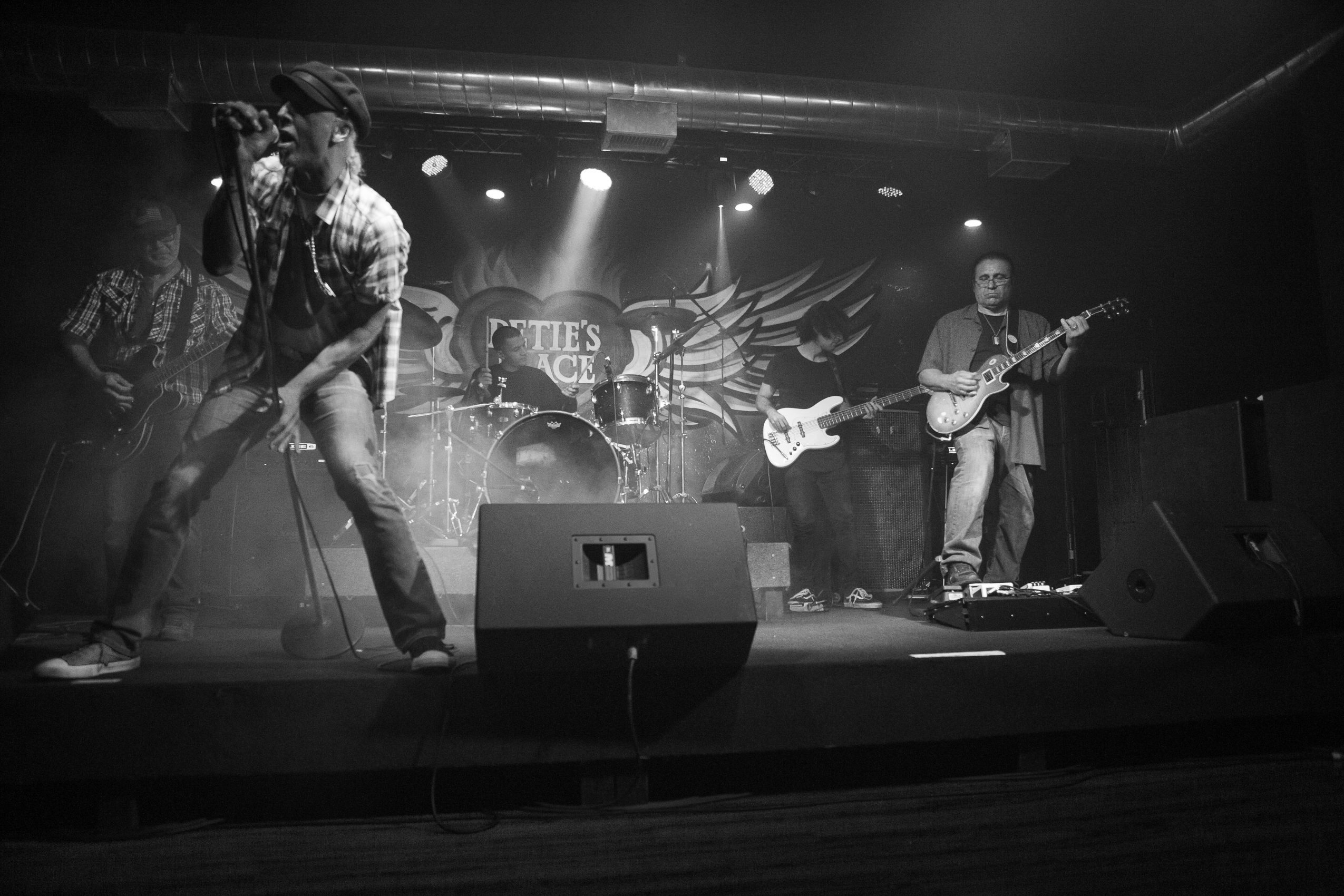 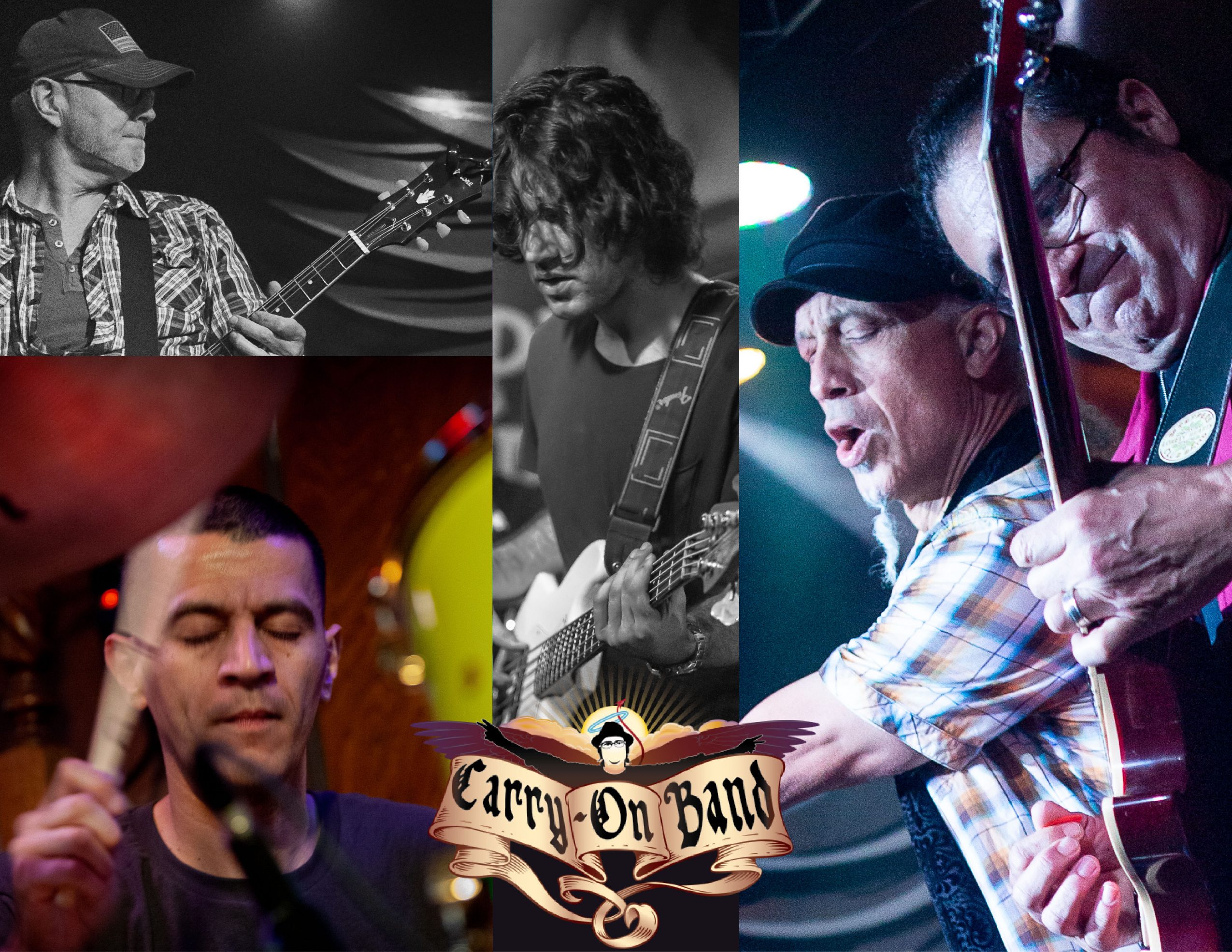 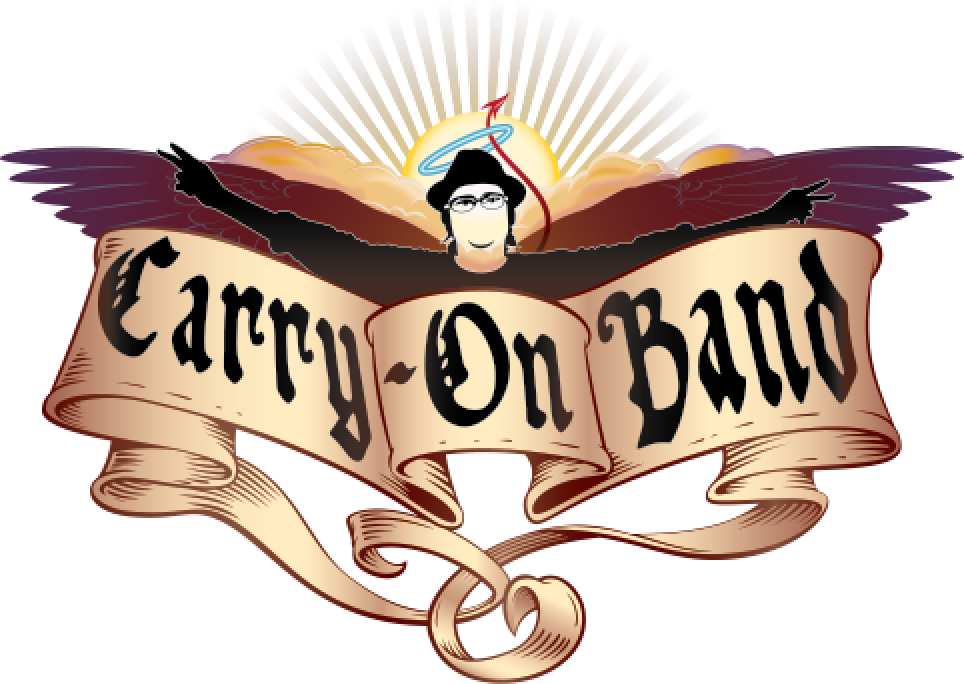 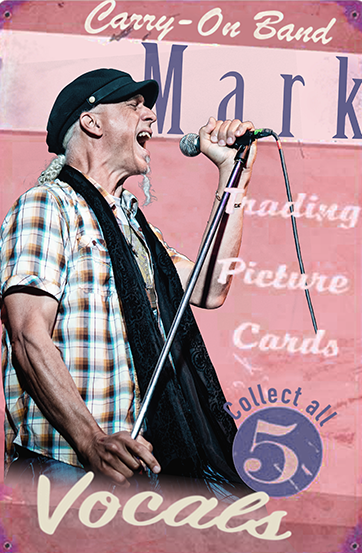 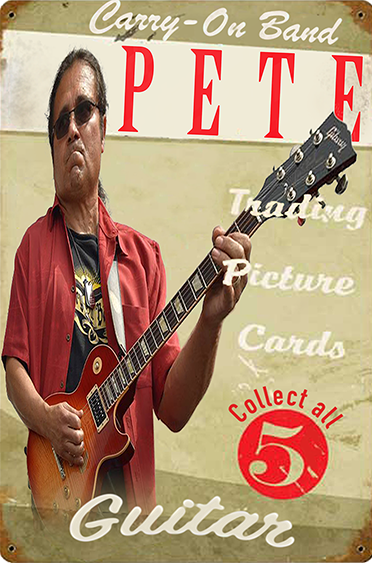 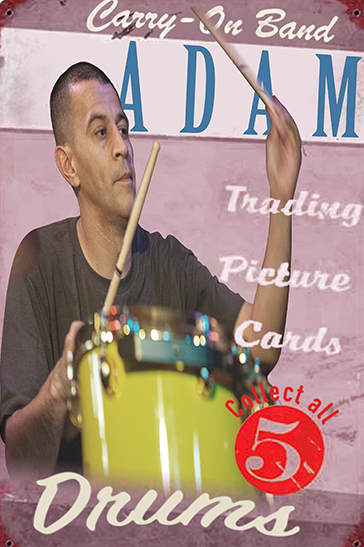 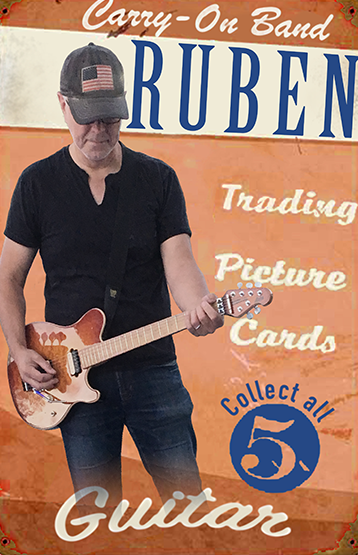