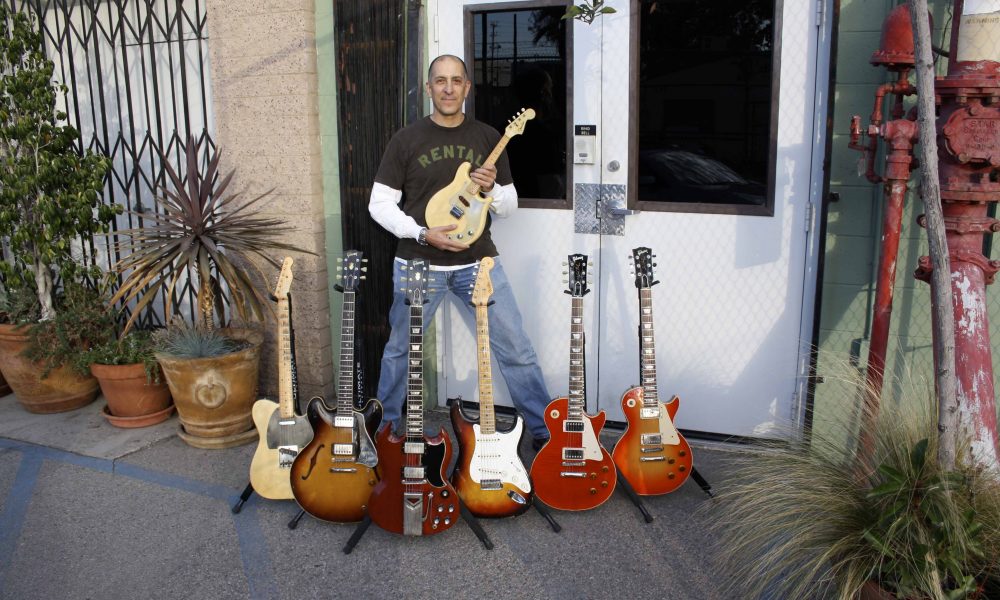 Today we’d like to introduce you to Lon Cohen.

Thanks for sharing your story with us Lon. So, let’s start at the beginning and we can move on from there.
I came to Los Angeles from New York in the late 70’s to pursue a career as a rock guitarist. To support myself during that time, I worked at a musical instrument repair shop, Warner, Elektra, Atlantic Records, managed various bands and then for Frank Zappa where I helped build his Utility Muffin Research Kitchen studio and as a personal assistant. One day, my band was preparing for a showcase with Warner Bros. Records when my amp broke down. I found a little shop next to the rehearsal space that had some guitar gear for rent and I was able to get through that performance with a rented amp. When my band didn’t get the huge record deal we were hoping for, I went back to this shop and asked for a job. I thought, “how cool… a place where you can rent cool guitar gear!”… One day, someone called and said, “hey… do you guys have a Martin 12 string acoustic guitar for rent” and the owner said, “no” and I said, “hey, we should have one of those” and he said, “if you want to buy it, I’ll split the rental with you”… and a light bulb went off in my head. After that, every time someone called for something he didn’t have, I would go out and buy it and then split the rental with him. This was in the heyday of recoding in Los Angeles so bands would come from all over the world to record and folks more and more came to know that they could get all kinds of guitar from us. After a while I parted ways with this shop and at that point, I had collected so much gear, that I decided to start my own company. Over time, as the music business started to change, I saw the writing on the walls and decided to change as well, so I “morphed” into providing “full backline” (which is a full range of performance musical instruments (drums, keyboards, percussion, synths, wireless etc…). Furthermore, we expanded into not only recording studio rentals, but live concerts, television, touring and all around support for the professional musician. Now, we provide musical instruments for some of the most talented and well known musicians, television shows, recording studios, concert venues and tours in the world.

Has it been a smooth road?
When I decided to start my business, it was anything but easy and smooth. I thought to myself, “Where do I start?” I had to get a building and trucks and employees and desks and chairs and computers and paper clips and, and, and…. I was overwhelmed. For a while, I worked out of my house with instruments all over the place (big stuff in the garage and smaller items in the spare bedroom. I had a cell phone and pager and if someone called at 10 PM at night, I had to jump in my van and take care of them. It was grueling. Once I finally found a building, I had the stress of figuring out how to pay for everything and also dealing with the minutia of all the little details of starting a legitimate business. I was stretched to my limit but the “phone kept ringing” and eventually, I hired employees and things started to smooth out. One day, I was leaving the shop late and I had forgotten to turn off the light in the lounge. I turned back to look at the building and through the front window, I saw a picture of Jimi Hendrix that I had put on the wall (the one where he is burning his guitar at the Monterey Pop Festival). It was so cool to look back and see that on the wall and I remember in that moment thinking… “I did it!”

So, as you know, we’re impressed with Lon Cohen Studio Rentals – tell our readers more, for example what you’re most proud of as a company and what sets you apart from others.
We are considered to be the “Ferrari” of backline companies. We provide “recording quality” and “world class” performance backline to some of the most talented musicians on the planet. We also provide storage, cartage (the moving and set up of gear), tech services and repairs. We are known for having pristine and stunning instruments, for sterling customer service and for our passion and integrity. What sets us apart from other similar companies is that we are “relationship” oriented and entirely committed to an extremely high level of quality on all levels. Humbly speaking, our attention to detail is unparalleled. I am most proud though, of my hard working and passionate employees who truly understand the meaning of “customer service” and integrity.

Let’s touch on your thoughts about our city – what do you like the most and least?
Aside from the weather, what I like the most about Los Angeles is the range of artistry and variety of venues for these artists to showcase their talents. Clearly, we have some of the top recording studios, television shows and performance venues and this attracts the greatest musicians and artists in the world. On the other side, well I guess it’s been said that “LA is like granola… filled with fruits, flakes and nuts”!!!