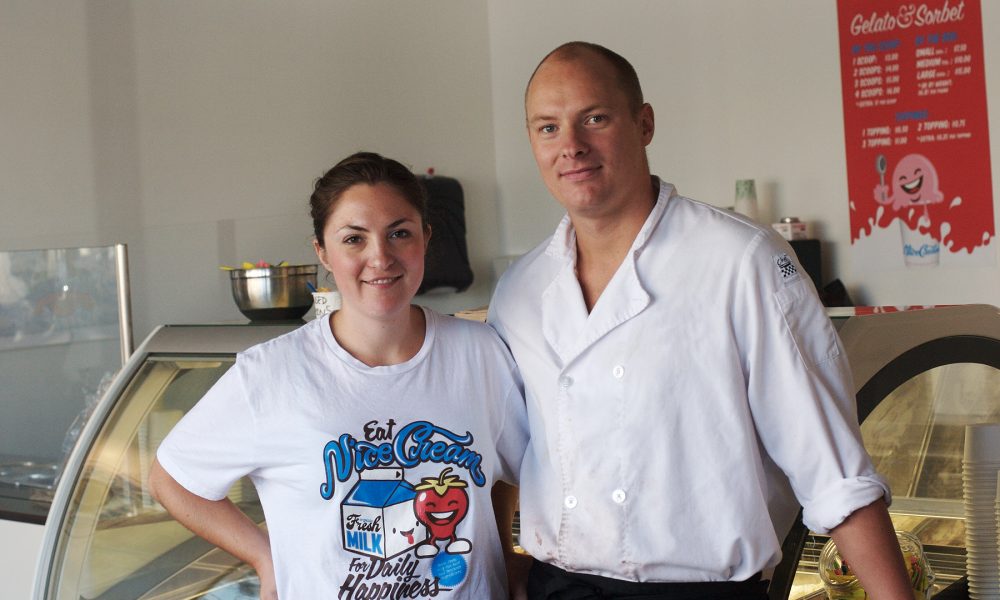 Today we’d like to introduce you to Laura Bjergfelt Nielsen and Christian Toxboe.

Laura and Christian, please share your story with us. How did you get to where you are today?
My husband, Christian, and I moved from Copenhagen Denmark in 2008 to Venice Beach, with a dream of opening up organic gelato and sorbet stores.

We found a great spot on the now very trendy Abbot Kinney Blvd and opened up for business the fall of 2008.

It was really rough in the first couple of years. Christian and I worked most shifts. Got up early to make the gelato and sorbet, took turns slinging the product while the other one took a nap in the back.

In the Spring of 2009, we opened a satellite store on the Venice boardwalk where we drove the gelato and sorbet to in an electric golf cart. This was fun times.

In 2011, we opened a store in the Santa Monica mall and in 2012 we opened another store in Costa Mesa.

In 2015, we opened a self-serve store in Playa Vista where customers would pull their own servings much like the popular frozen yogurt concept.

In 2016, Santa Monica mall closed down the part of the mall where our store was located so that was the end of that store. Later same summer we decided to close down the Costa Mesa store as it was too hard to manage from LA.

Unfortunately, we had to close down our baby on Abbot Kinney last Fall (2016) as rents got too high and a competing ice cream store had opened up across the street and the locals weren’t as loyal as we had hoped (bitterness much :D).

Now we’re enjoying the last stores we have left, which suits me well as I have a 1 year old to take care of and another one on the way, and Christian has started helping other small businesses pulling permits and building stores.

We’re always bombarded by how great it is to pursue your passion, etc. – but we’ve spoken with enough people to know that it’s not always easy. Overall, would you say things have been easy for you?
Not at all.

We opened in 2008 when the world around us was crumbling and no one felt safe spending a dime on anything. Meanwhile rents were high, labor costs continued to grow and produce prices have gone up as well.

We’ve also has to fight for customers.

Simultaneously LA is a place where food trends dictate what people spend money on.

When we opened up shop Pinkberry was the cat’s pyjamas, then cupcakes became the sweet pf the year, followed by ice cream sandwiches and now we see artisanal ice cream stores popping up everywhere you look. We have always tried to stay true to homemade, fresh and local instead of following food trends.

We’d love to hear more about your business.
We’ve changed a little since closing the Abbot Kinney store down. Back then we made all product in house, fresh every morning using organic and local ingredients.

Not having a kitchen anymore, we are buying freshly made gelato and sorbet and have it delivered every morning.

Besides from the product, we pride ourselves of being local. We’re like an old fashion mom and pop store.

What were you like growing up?
Cristian has always been the “business man/boy.”

He spent a lot of time contemplating business ideas. When he was 10 his dad paid him $20 to move fire wood from one end of the backyard to the other. Then Christian paid his friend $10 to do it for him while he enjoyed a glass of lemonade.