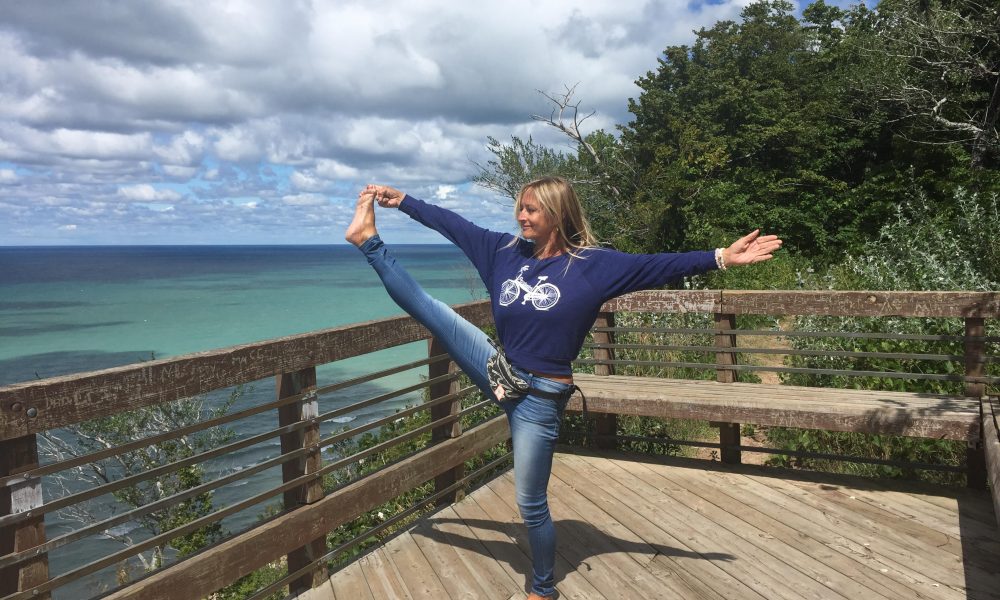 I first took Whitney Allen’s class at Center For Yoga (YogaWorks Larchmont) roughly five years ago. At that time in my life, I would go to a class every now and then – basically whenever my schedule allowed for it (which was pretty much never). A few years later, I became a more frequent yoga practitioner, making yoga one of my top priorities on my daily to do list. I was initially going to classes on the west side, as it was convenient to the location of where I worked. However, when I started working more from home, I found myself not really in the mood to fight LA traffic, seemingly rushing to get my zen on.

I asked a fellow yogi friend, who shared similar tastes in flow classes, which classes I should be frequenting in the Mid-Wilshire to Hollywood area. He said “Whitney Allen’s. You’ll love her class. Plus you both have a musical theatre background.”

One Thursday evening in 2014, I grabbed my mat and headed to Larchmont Village. I secured my mat real estate over in the corner, near the Buddha. Whitney walked in the room and smiled directly at me, “Heather, right?”

Wow, she remembered me. “Yes!”

I instantly felt her warmth and knew I was in a safe space to do my practice. Over two years later, my mat and I are still making our way to her classes – not only for the practice, but also for the music. I may or may have not Shazamed a song (or two…) in her class while pretending to be in child’s pose. As I have taken notice on what a huge, impactful difference my yoga practice has created in my own life, I began to get curious about the teachers that I took from. If my life was changing and growing, mirroring my yoga practice, I could only imagine it much be similar for the ones who had decided to teach the practice.

I sat down with Whitney recently and dug deep into what her practice meant to her and also her best advice for on and off the mat.

Heather Reinhardt: What was your “aha” moment on deciding to pursue the yoga teacher path?

Whitney Allen: After a year on tour with a Broadway show, I did a Vipassana meditation retreat. Ten days of complete silence with ten hours of meditation per day. At the time, I had been practicing yoga asana for roughly five years, and for a while had been curious and interested in teaching, which of course happens to many serious practitioners. I loved the idea of crafting a class, sharing the practice, and weaving music into the experience. When I started teaching, advanced classes with music were rare. After I finished the retreat, I came out of the silence feeling like I should switch careers – no more Broadway, switch cities – stay in LA instead of going back to NYC, and leap onto this new path. After making that leap, doors opened wide for me. I was teaching full time at Center for Yoga about 6 months later. Leap and the net will appear! It did…

HR: I love that metaphor. I think having a yoga practice helps make the leaps less scary. What is the biggest impact that your yoga practice has created in your own life?

WA: I’m not sure who I would be without my practice. Would I even be alive? Who knows – I may have already combusted from pent up emotions. I feel like all of us grow up eventually, with or without a yoga practice. Some people don’t even need yoga so much. My mom is pretty evolved and she hasn’t spent much time on a yoga mat. But she has life experience to give her such wisdom. For some people, a yoga practice can be a fast track to wisdom. You end up wasting less time and energy on things that you can’t control or relationships that don’t work. You learn to turn your attention to what does matter in your life and the people that matter. You become more efficient and more effective as a human. You don’t have to get to old age to discover the important lessons the human experience wants you to learn. That’s what I get from my practice now. Though for years, I just wanted to do handstands and have a nice yoga butt… okay, I’d be lying if I said I don’t love inversions and the effect the practice has on my body, too! My practice keeps me young physically, wise mentally, and compassionate emotionally.

HR: I can totally relate – I am fairly certain that I would not be living this life I have created for myself – along with the boundaries, lessons and all-round effectiveness – today without my yoga practice. Who I was without yoga and who I am with yoga are like night and day. One of my favorite aspects of your class is how you so elegantly sing chants and Oms at the end to wrap up the practice. Going back to your background with music, tell us more about how you incorporate it into your yoga teaching style.

WA: Like I mentioned, there weren’t many teachers using music when I came to LA to practice and teach. Vinnie Marino was one. I admired how he would highlight the message of the songs he played in class. When I became a teacher I found myself gravitating toward playing music that was pleasing harmonically, but also uplifted the room at the right times. For me, it’s so similar to musical theatre in how we all show up to our mat with a story that day, and the music becomes the challenge or the resolution for that story, depending on how the song affects each person. Music can make us experience all sorts of emotions – joy, grief, and so many things in between. It brings us together even though we are all going through something different that day. When a song affects me personally, I love to play it in class and let it have its own effect on others in the yoga room.

HR: I saw a quote on Instagram recently that relates to this. It said, “Music is what feelings sound like.” I also love that about Vinnie’s class – along with his humor. I always know walking into his class that I’ll have a strong practice along with a few laughs. I find myself only attending classes that play music – partly because of my dance and musical theatre background, where it is second nature for me to incorporate movement and sound together – and partly because I can emotionally process my day/week/life best with music playing, while moving in and out of the poses. What is your best piece of advice about yoga, wellness and/or lifestyle?

WA: Show up. Keep showing up. Start where you are. Don’t skip steps – go one step at a time. How you do one thing is how you do everything. There’s no hidden message in any of these advisements – the truth is immediate. Also, none of these are original – I’ve heard all this advice elsewhere, and it strongly resonates with me. These are statements I continually learn from.

HR: Yes! How you do one thing is how you do everything has been my mantra over the last year. Thank you for sharing your yoga story – and your gift of music – with us!

You can find Whitney’s class at –

Wanderlust Hollywood (where she also the studio’s music supervisor)