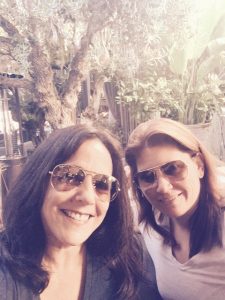 Today we’d like to introduce you to Krissy Schuh and Sally Kushner.

Krissy is the Chief Executive Officer of Vestigate, a mobile app that gives you a live, real-time look inside restaurants and bars. Prior to launching Vestigate in 2015, Schuh served as Chief Operating Officer at LiveUniverse, a web-based company featuring online live user-generated content. For over 20 years, she worked in various high-level roles at NBC, CBS, FOX Sports, Hallmark Channel, First Look Studios and Hollywood Studios International.

She is originally from Colorado. She earned her B.S. in Business Administration from the University of Southern California. In her spare time, Schuh enjoys tending to her several rescue pets including a pot-bellied big.

Sally is President of Vestigate, a mobile app that gives you a live, real-time look inside bars and restaurants. Kushner attended the University of Michigan for her undergraduate degree, and Michigan State University College of Law to obtain her Juris Doctorate. Before joining Vestigate, Sallay was a litigator and partner at a law firm based in Los Angeles. When she’s not finding the next gem to add to Vestigate’s roster, she enjoys going to her favorite spin class.

They created Vestigate because like many people they would go out and end up at a not so fun place. The thought of going to another place always ended up on the question of whether it was going to be better or have the same dead energy. So, the idea came! What if you could see what another bar looked like right now without going there. That’s how Vestigate came about.

Great, so let’s dig a little deeper into the story – has it been an easy path overall and if not, what were the challenges you’ve had to overcome?
“We learned on the job, and are still learning every day.” Krissy- “We’ve never started a service business from the ground up.”

It took a year and a half just to create the product. The process of developing the product and the money needed to create the product was something they didn’t know. Also, figuring out the right marketing and determining if the branding is working. This was all things they learned along the way and did so with just the two of them.

They didn’t what they didn’t know. During the building process, they switched developers and finally landed on someone that was a great fit for them.

Vestigate – what should we know? What do you guys do best? What sets you apart from the competition?
Vestigate allows you to see a bar/restaurant in real time. You can actually see a live video footage inside the venue. Vestigate not only gives the consumer a “heads up” before they go out, but it helps the bar owners to pull in some foot traffic.

With this app, users can discover new places, find a cool happy hour or maybe a taco Tuesday spot. Not only will the discover, but they can schedule it on their calendar so they don’t forget about it.

What moment in your career do you look back most fondly on?
Growing this company and moving into different markets outside of Los Angeles. They have already started making a presence in Florida, and New York is next. It’s been such a positive experience for the app users and the restaurant/bar owners. 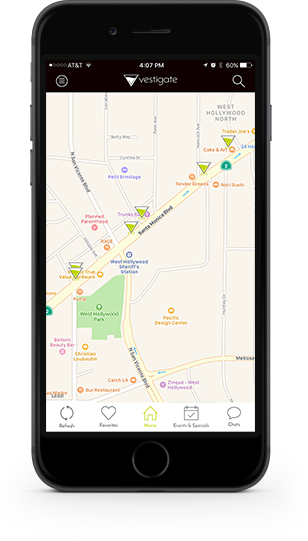 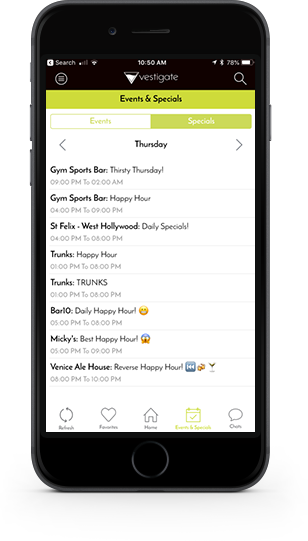 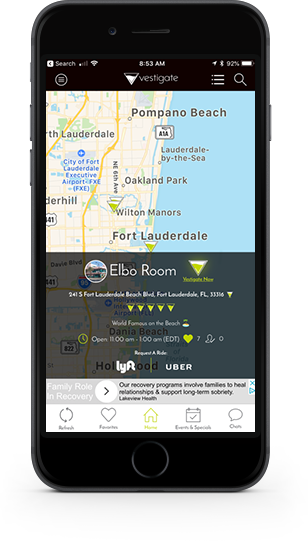 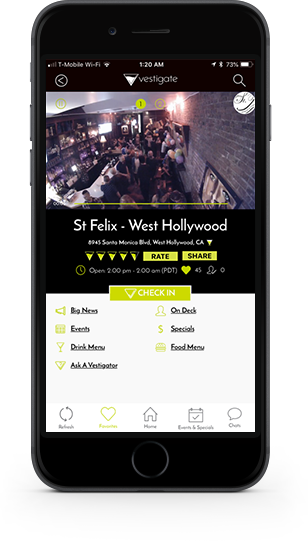