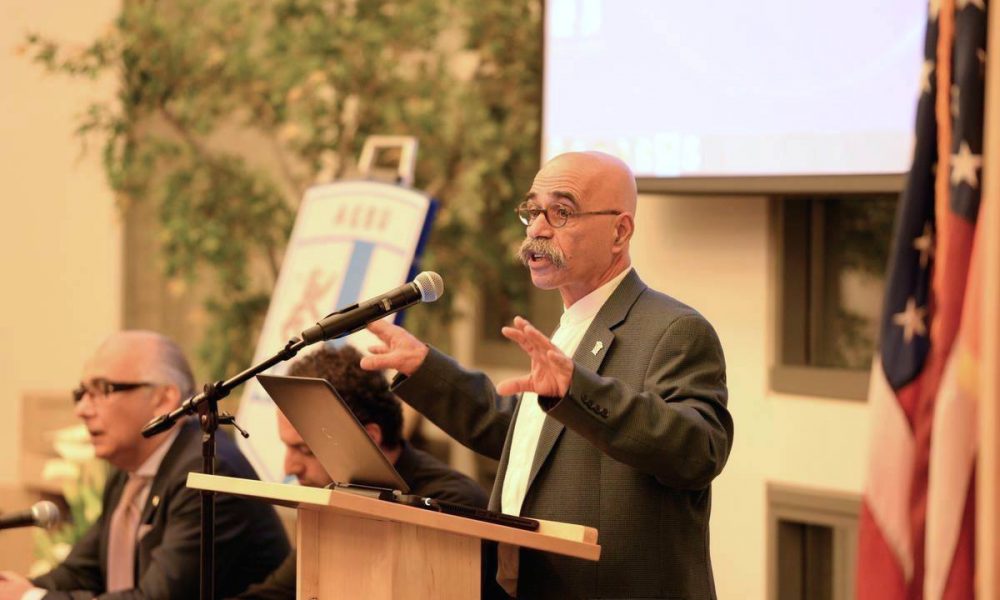 Today we’d like to introduce you to Hratch Kozibeyokian.

Hratch, let’s start with your story. We’d love to hear how you got started and how the journey has been so far.
Before World War I, my grandfather was a travelling weaver in Old Armenia (now Turkey). He carried a portable loom on his horse and rode from village to village on a year-long route repairing [weaving] rugs for townspeople along the way. He and my grandmother (once she was widowed and living with her children in a Syrian refugee camp) taught my father the trade, and he also became a professional weaver.

As an elementary school child growing up in Lebanon, I helped my parents weave. Early on, I remember beginning by sorting colors of yarn and weaving tight knots for them, but I advanced quickly. Even at an early age, the shapes, patterns, compositions and iconography of the antique Armenian rugs captured me. One of the most frequently used and iconic symbols in rugs and other ancient art forms, the Armenian Wheel of Eternity, represents the sun, universe and the eternal motion of life.

Later, as my father became a more expert tradesman, he would take on only the more advanced and complicated weaving jobs, and as he learned, I learned. All along, I was deepening my understanding of the distinct symbolism in Armenian rugs as opposed to those from cultures in surrounding countries such as Turkey and Iran.

In the mid-1970’s, my dad was sponsored by an antique Oriental carpet gallery in Chicago to be a restorer. By 1977, I joined him at the same company.

Lured by warmer weather, in 1979, I moved to Southern California and began working at another rug restoration business. Over the following 40 years, I have run several sales/restoration companies, as I continued pursuing knowledge on the meaning of symbolism in antique Armenian rugs.

My education came from experience, studying Geometry, Astrology, Theology and Anthropology—each of these fields plays a part in deciphering the story-telling code of these special rugs. Fine antique rugs have a meaning—they “say something” —they don’t just look pretty.

During this time, I branched out from rug repair to rug design. In the 1990’s, after realizing how large the demand was for antique Oriental carpets, I developed designs/distressing methods for new rugs that allowed them to look hundreds of years older, but without the high price. For instance, I might use a mix of enzymes and sunlight to soften the colors (Americans prefer more muted shades) or I might sheer off the tops of carpets to give them a worn and uneven appearance. I was the first to bring this trend to the market.

I designed rugs for a manufacturer in Armenia, consulted with movie studios (on time-appropriate rugs), sold, and repaired and reshaped carpets for decorators to the stars, and even became the first to lecturer to teach a course in “Tapeology” (the study of rugs and carpets) at Cal State Northridge. When catering to interior designers needing custom-woven rugs, I prepared “strike off” samples before weaving the rugs from scratch. Partnering with manufacturers overseas, I also provided wholesale new rugs to dealers.

After business took off, we built enough repeat clientele (designers, dealers, museums, carpet collectors and admirers), and realized I could do this work anywhere. We then built a studio in the hills of Shadow Hills where my wife, Mira, and reside and work with a small staff.

Overall, has it been relatively smooth? If not, what were some of the struggles along the way?
Not unlike many immigrants now, my most difficult struggles were a result of arriving in America, a totally unknown culture, as a refugee with no money or knowledge of the language.

In America, I had to build a reputation on only what I could show. No one knew who I was or what my capabilities were. For instance, a man who owned an oriental rug gallery, asked me about my restoration fees. I didn’t even know the minimum wage. I had to figure things out and prove myself in creative ways. In this case, I offered to work for free for a week and let him decide the wage. I continually found ways for us to become more profitable and began taking side jobs that led to increased contacts and opportunities.

Ko ‘Z’ Craft – what should we know? What do you guys do best? What sets you apart from the competition?
Ko ‘Z’ Craft offers customized services for the care and restoration of hand-woven rugs and textiles. Specifically, we provide appraisals, restoration, design, cleaning, manufacturing, consulting and sales.

What sets us apart is that we take on the projects other restoration companies turn down because they are too difficult. In addition, with my in-depth knowledge of the iconology of antique Armenian rugs, I am one of the few experts in the world who is able to educate rug collectors and people who appreciate rugs about this rich history through consultations, public talks and/or museum exhibitions.

For the past 15 years, we have focused our efforts on meeting clients’ requests for custom projects.

A description of several cases will help illustrate Ko ‘Z’ Craft’s specialized services and craftsmanship and why I am so proud of our work:

Several months ago, an interior decorator approached me about designing a staircase runner. The homeowner wanted a carpet on the stairs with no less than 24 colors, finely hand woven in wool with silk highlights with a floral and curvilinear pattern attached—each stair would have a different pattern, but the stairs would have continuity, and the flow of the pile would have to run down the stairs and turn left at the landing. I could design such a runner and have it woven, but that would take 2-3 years and be extremely expensive. The client did not want to wait that long.

Instead, I located a 14’ x 22’ new Persian rug and cut the field into 18 pieces which could be resewn in a manner which met the design needs of the homeowner and covered two flights of stairs and a landing. Prior to hand sewing the carpet pieces together, I photographed the rug and rendered the proposed design, so the client could see how the completed piece would look on the stairs.

When the Disney Grand’s hotel’s very large lobby rug began looking more shabby than chic, the Ko ‘Z’ Craft crew was called upon. First, I took several yarn samples from the worn areas and hand dyed new yarn to match. Then, one late night, I took a crew of four weavers to the site and we rewove the bare sections of the high traffic areas by hand. Afterward, we sheared the new areas so they would match the rest of the existing carpet. Doing so extended the life of the carpet for another five years.

The Armenian Orphan Rug at the White House

When the White House Visitor Center agreed to display the Armenian Orphan Rug in 2014, I was invited, as a director of the Armenian Rugs Society, to give the rug’s history at a Congressional Press conference.

After the Armenian Genocide, the rug was woven in 10 months by orphaned girls and presented to President Calvin Coolidge in 1925 as a gesture of appreciation to the American people for their support of the relief societies that provided humanitarian aid to children left without parents by the war.

I am often called upon as an expert to speak on the history of antique Armenian rugs. Currently, I serve as the President of the Armenian Rugs Society, a non-profit organization dedicated to the identification, preservation and dissemination of knowledge of Armenian rugs.

In pursuit of this mission, we hold symposiums nationwide and maintain a data bank of hand-knotted oriental rugs, carpets, kilims, bags and trappings bearing inscriptions woven in the Armenian alphabet.

Designers for the Ritz-Carlton contacted me when they wanted to replace the rugs in their hallways, lobbies and rooms with a cost-effective, durable, low maintenance, elegant solution featuring Ritz-Carlton’s gold and blue colors.

Within the designers’ specifications, I designed and oversaw the manufacturing of 43 new, custom area rugs for the rooms and to cover 16,000 square feet of hallways.

I was inspired by a drawing from a 13th Century Armenian illuminated manuscript to include a peacock motif in the Ritz Carlton’s custom rugs.

In 2014, I also consulted in the design of the very first American Armenian Rose float titled “Cradle of Civilization.” (See link to article and photos about the float below.)

I am most proud and grateful that this country has given me the opportunity to be who I wanted to be—to reach my goals—to be my ultimate self. I am proud to have built my successful business from the ground up.

Of course, my grandfather and father were my primary mentors. In addition, my wife Mira Assadourian, who believed in my dreams and supported me in all aspects of building our business, has been critical to our success.

In addition, I am guided by the teachings of the early 20th-century mystic, philosopher and spiritual teacher, George Gurdjieff. He has influenced both my outlook on life and business.

Gurdjieff believed that, in general, people live on automatic pilot, without unification of their minds, bodies and emotions, but that, for a more balanced and meaningful life, a person can work toward and achieve greater mindfulness and awakening.

What is “success” or “successful” for you?
My measure of success is being able to meet my goals. From when I was young, I wanted to understand Armenian carpets—the mystery and meaning behind their symbolism and history. Due to decades of experience, research and scientific studies, I have learned how to decipher these codes and speak definitively on this extraordinary art form.

Photo 1
Hratch beginning fabrication of fine Persian silk and wool 21 steps with a turn on the landing.

Photo 4
Custom motif for new carpet designed by Hratch Kozibeyokian based on a peacock in an ancient illuminated Armenian manuscript designed for the Ritz Carlton carpet project.

Photo 5
Computer generated images of the design of a custom rug by Hratch exclusively for the Ritz Carlton. He created 12 variations of this pattern.

Photo 6
Hratch speaking at the Skirball Cultural Center about the history of the Orphan Carpet presented by Armenian Orphans to President Calvin Coolidge.

Photo 10
Circa 1920 Armenian Tapestry from the private collection of Hratch Kozibeyokian and Mira Assadourian depicting two peacocks flanking the tree of life. First American Armenian Rose float design was inspired from this tapestry. This hand woven artwork was auctioned and the proceeds were donated for the realization of the Rose float in 2014.

Photo 12
Hratch and his assistant reshape an antique Oriental carpet.