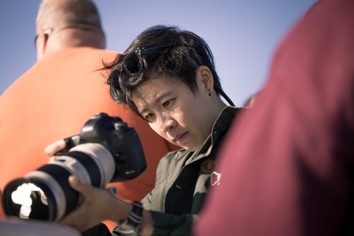 Kingkan, can you briefly walk us through your story – how you started and how you got to where you are today.
I am a Cinematographer who based in Los Angeles and New York City, I was born in Thailand, and I exactly found myself drawn to the camera at the age of 18 which turned into a lifelong passion for the film and photography. I first started my career at the Film Factory in Bangkok city Thailand, as an Assistant Camera and I had learned so much from the professionals including Chankit Chamnivikaipong (DOP), Pen-Ek Ratanaruang, Wisit Sasanatieng, Nang Pongpaiboon Siddhigu, and Mike Warr.

When I moved to Los Angeles in 2010 in order to follow my passion of becoming a filmmaker. I remember the first feature film I got involve was called “Amazing Love The Story of Hosea” which was directed by Kevin Downes. After this project, it was challenging me to keep pushing myself to move forward.

In the City of Angel, I have made a lot of connections and worked on various projects, including the commercials, the short films, the feature films, the documentary, and the music videos. After spending two years in L.A., I think it was the time to find a new place to inspire myself. So, I decided to move to New York City.

In 2012, I moved to New York City. I pursued a degree at New York Film Academy (NYFA). I have established an abiding career as a Cinematographer, which was so fantastic. I was working on the different professional projects ranging from Features to Short Films, Documentary, Music Videos, Fashion Films, and Commercials. My works have selected too many festivals, and It won many awards as a cinematographer.

Praised for my intense visual style, I have collaborated closely with some of the most talented award-winning directors in the USA and International. My work has taken all over the world including USA, Sweden, Italy, Taiwan, China, and Thailand.

Overall, has it been relatively smooth? If not, what were some of the struggles along the way?
Definitely, my life is always a struggle. When I say “always,” I really mean it. But I do believe “Great things will take time.” I remember when I first came to the United States. I was alone, I cannot speak English fluency. I did not have a car, no smartphone, and no computer. So, it was some barriers at that time.

When I got an internship in a camera department on a feature film “Amazing Love The Story of Hosea” Directed by Kevin Downes. It was my first time I have to communicate with the crew. I have to use walkie talkie that even harder for me. I was so scared, shined and frustrated. It was a unique challenge to communicate with the crew, and I often felt isolated and vulnerable. One good thing that I was trained as an Assistant Camera before that it made me comfortable to work with the crew and made everything went smoothly.

After that, I have met a friend (Tobias Deml, a cinematographer) who was my super best friend since then. I asked to work with him as an Assistant Camera in many projects has was a DP’s, he even taught me English when we drove together on set, and he was always offering me jobs. We continue working together until I moved to New York. I think I was lucky enough to find good people in L.A. and we are still be good friends until now.

Alright – so let’s talk business. Tell us about kingkansfilm – what should we know?
I am an independent cinematographer, which exploration behind the camera began with myself as a camera assistant. After that I am jumping up to an independent cinematographer, I had done on the indie’s films, fashion films, documentary, music videos and commercials for clients including Samsung, Hoyu Professional USA, Purra, Sunsilk, Natyoural, Oscalito, Vogue, Elle, Harper’s Bazaar, Nylon, and others.

The moment of work makes me proud the most is when all directors want to work with me again after we worked together for the first time and we have a long relationship and also they recommended me to other directors. Even when someone saw my work on social media and sent me messages that they would love to collaborate with me.

There are so many things I see that I want to achieve. That is why it is so important to keep shooting as much as I can at the beginning, even if I felt, but it is proved that I have been trying.

Any shoutouts? Who else deserves credit in this story – who has played a meaningful role?
My mom and my dad are my supporters. They are my role models and my mentors, without them I will never be who I am today. They always encourage me, support me and give me advise.

Rewat Prelert (Director of Photography), he is my first teacher in The Film Factory Productions who taught me how to work as a professional as an assistant camera, trained me as a camera loader and give me an opportunity to shoot behind the scene for a Car4cash commercial.

Chankit Chamnivikaipong (Director of Photography), he is my role model of cinematographer, who encourage, inspire and support me. He is also my scuba diving instructor. When I first worked on an underwater commercial, and he was a director of photography on that job, I was a video valley (Third camera assistant) I saw him and the first camera assistant going into the water that was so excited. I look at the monitor and said “Wow” then said to myself I want to be like them. It stuck in my head all the time.

When we wrapped a job and back to the office the next morning, I told the assistant director who is close to Mr.Chankit that I was interested in being a scuba diving. So, when he heard about that he asked me am, I really want to learn it, and I said “Yes.” He taught me how to be a scuba diving. Every day in the office, if he did not have gigs or I did not have to be on set, we will go to the pool and practiced. Once I passed the test, he bought me on the commercial set and now I am become a scuba diving assistant for the camera department.

After we wrapped on the shooting day, he offers me to go underwater to pick up scuba weights and sandbags from under water. That’s what my magic moment. I also remember the moment when I felt cinematography is not my way and I feel give up, I got home open my computer and saw his message (I don’t remember what we were talking before), but in the message, he said: “You come to the right way!” Keep fighting. That’s raising me up again.

I would also thank you, everyone, who comes into my life (not to mentioned), but they are all mean so much to me. Thank you so much for teaching me, watching me grow. 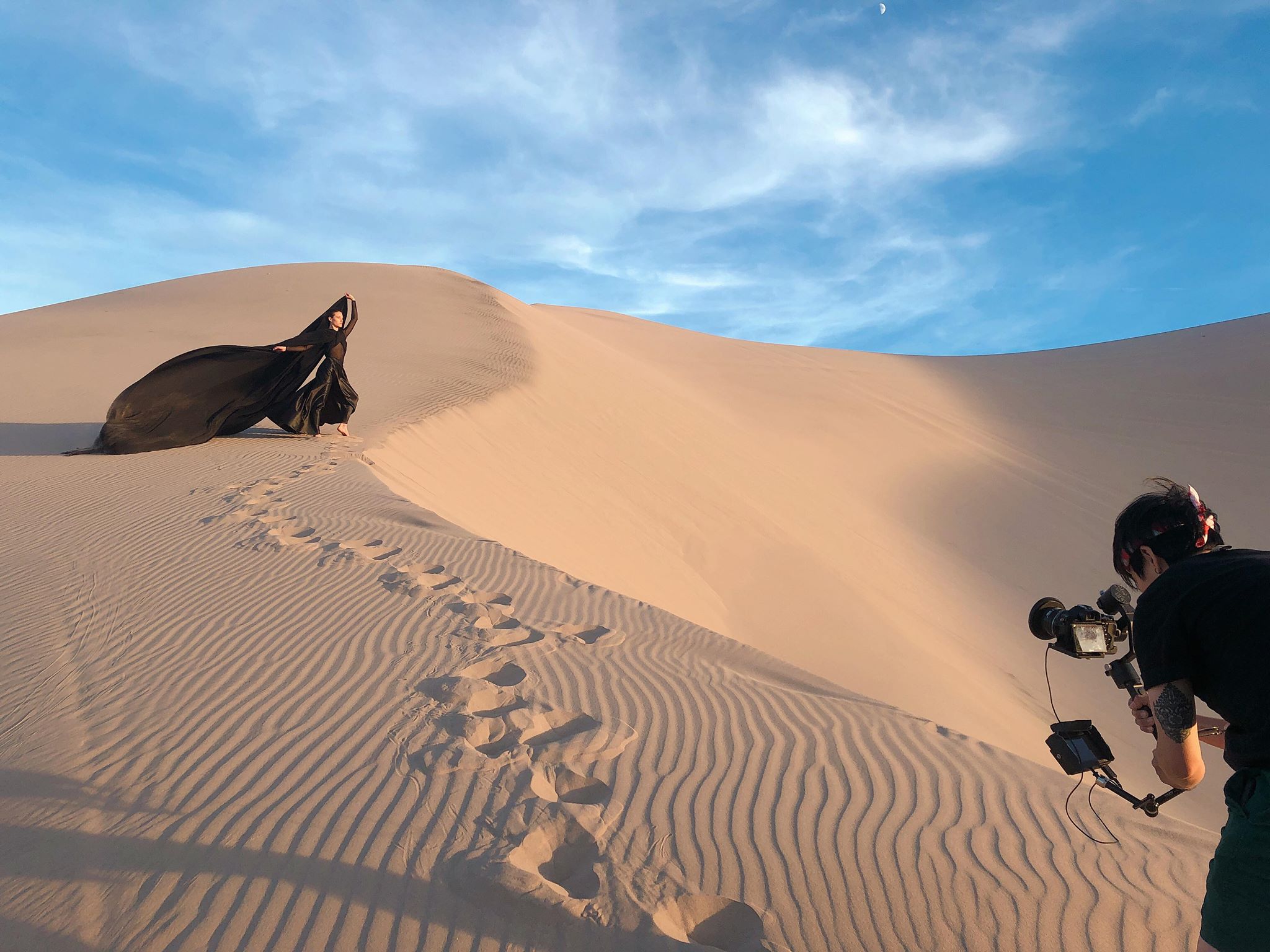 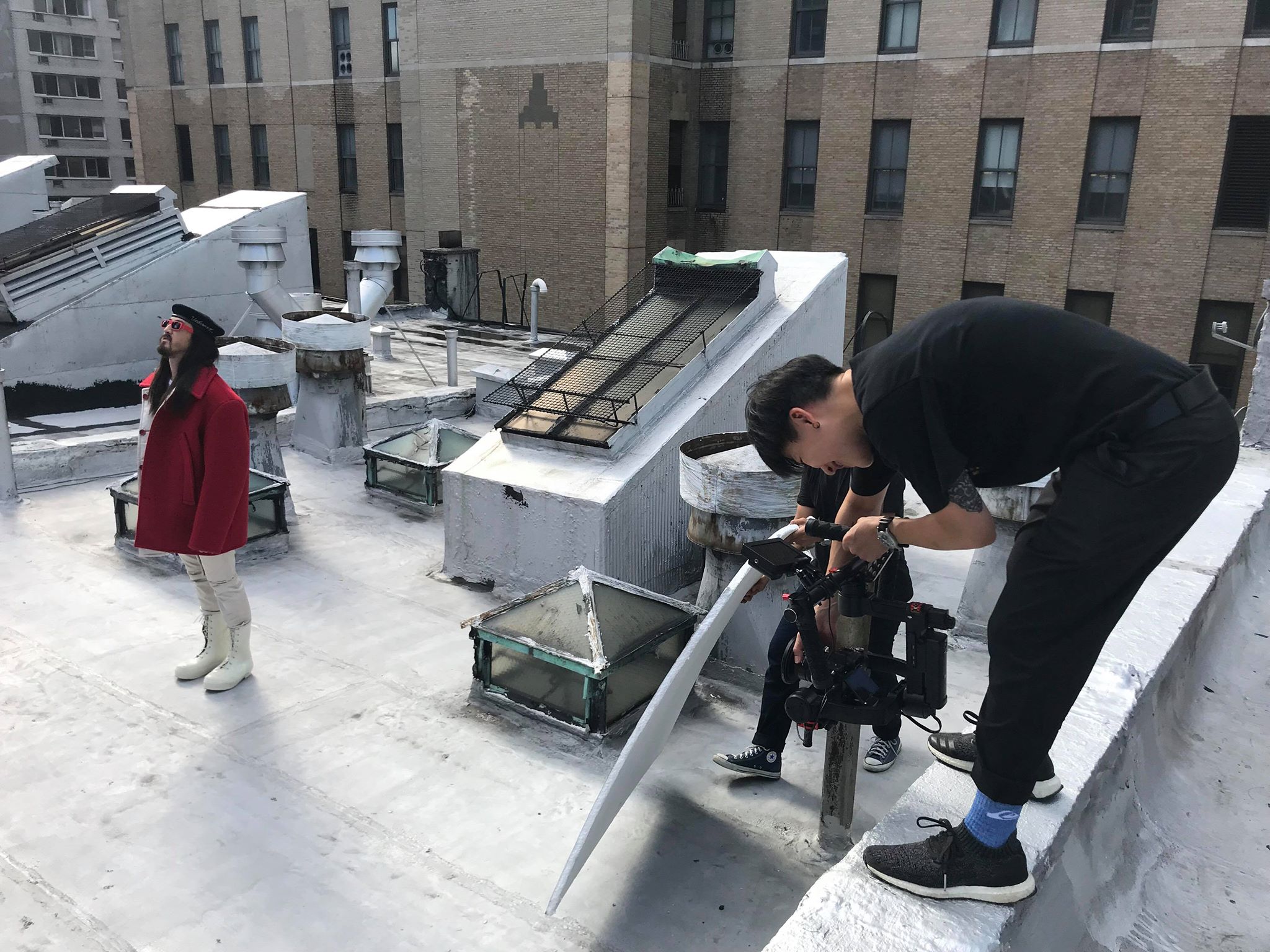 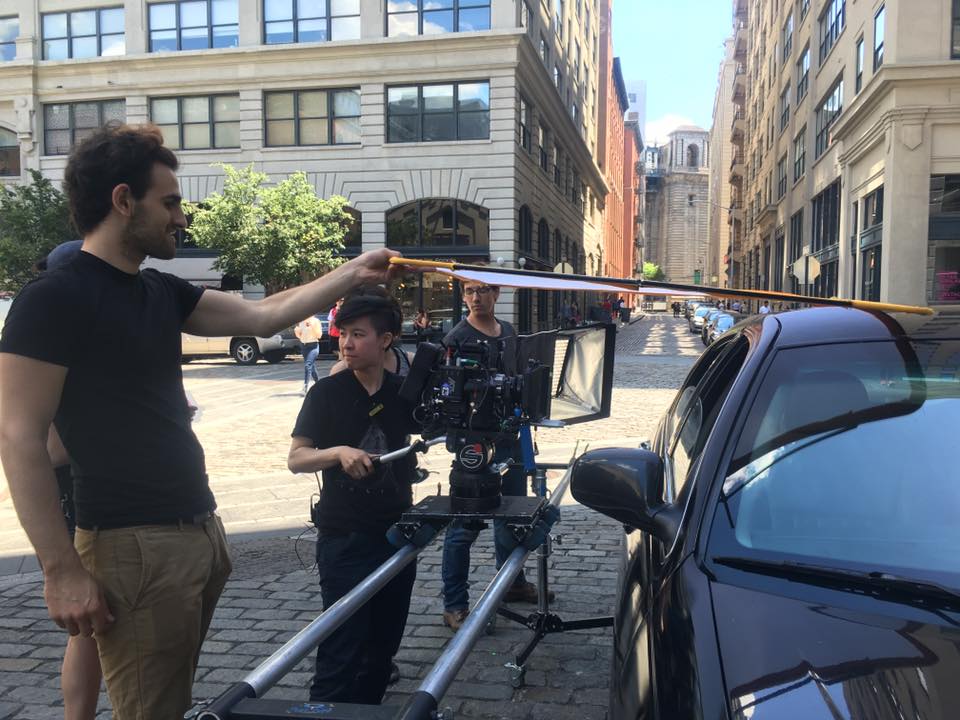 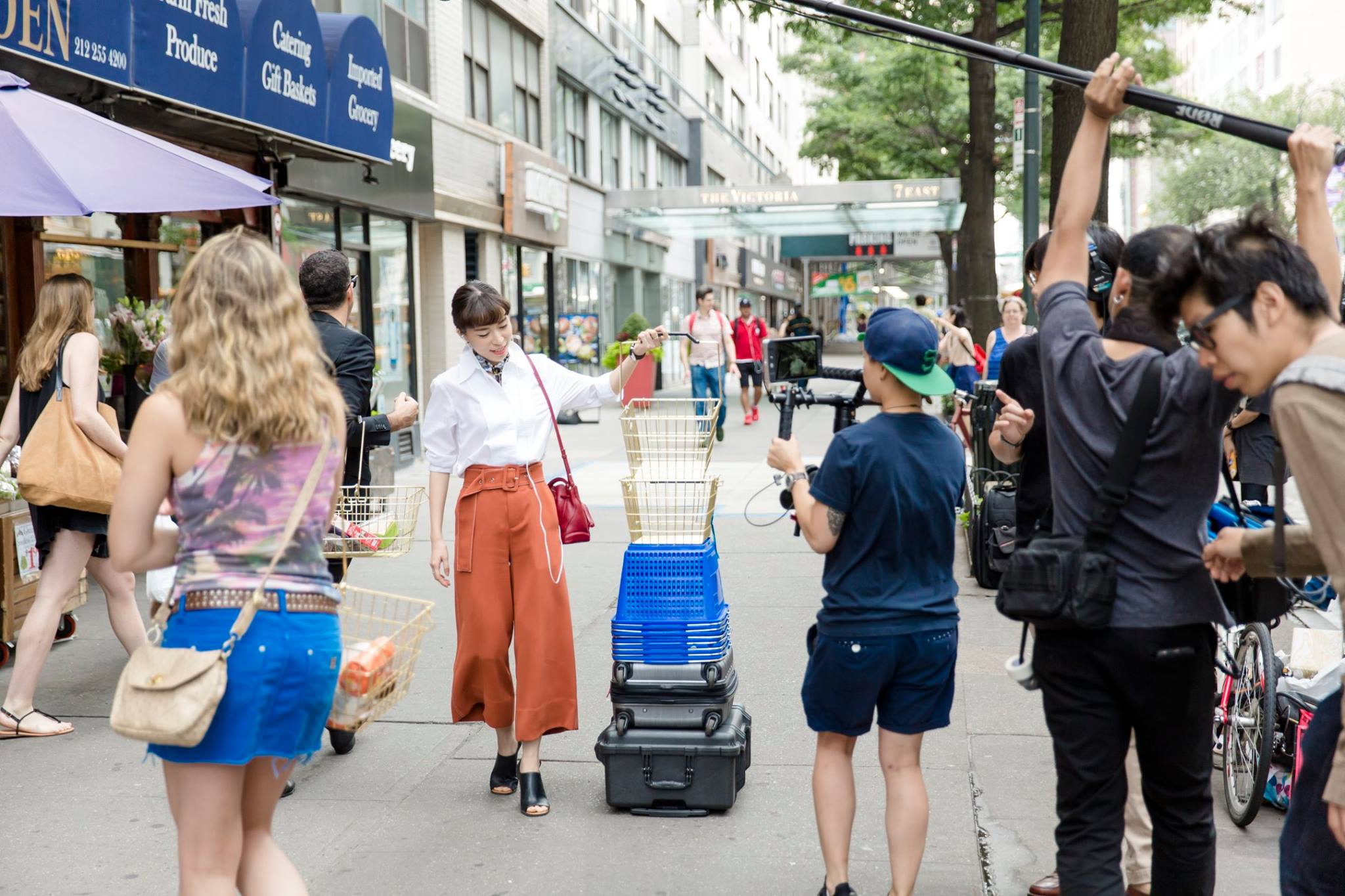 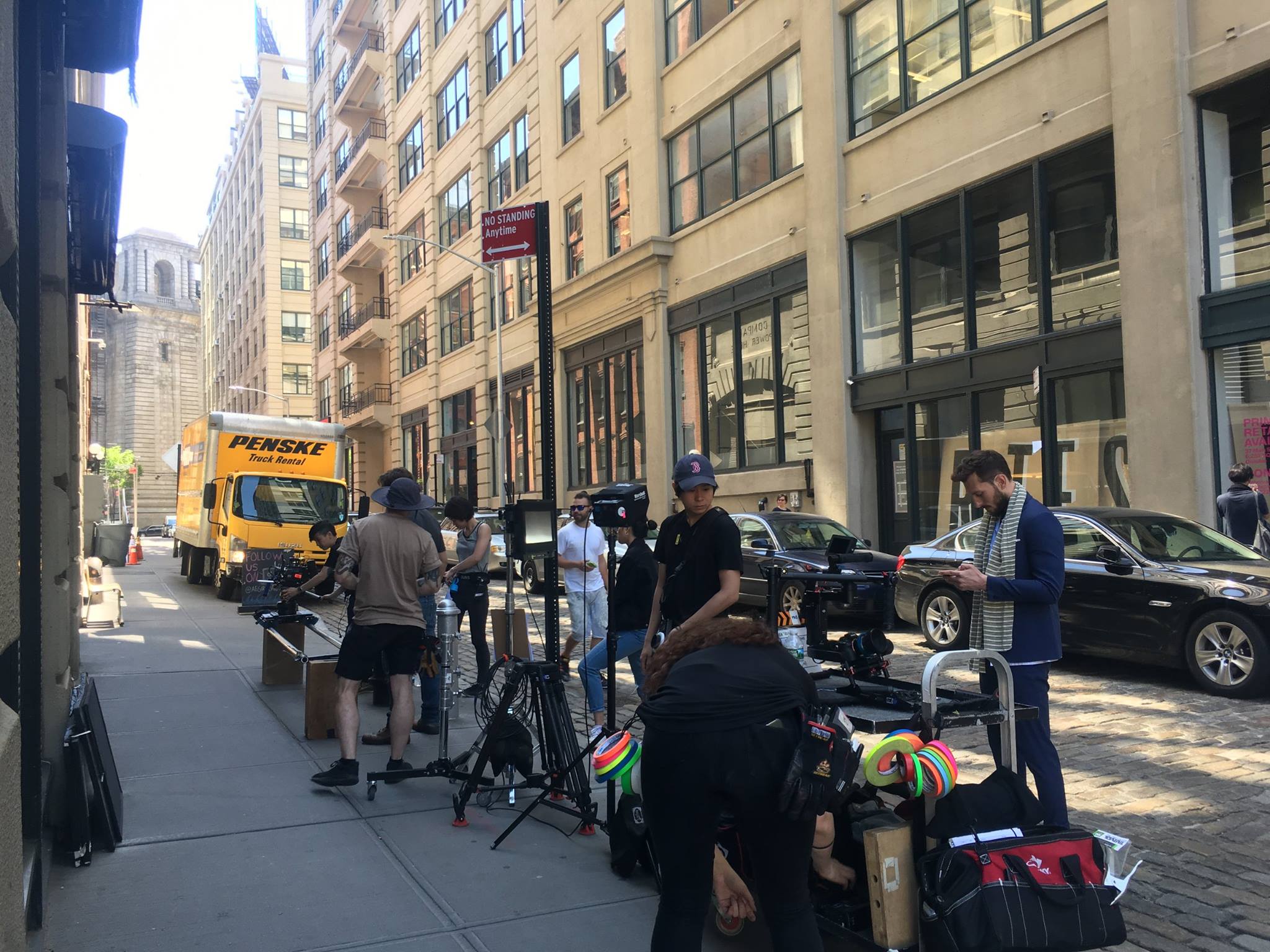 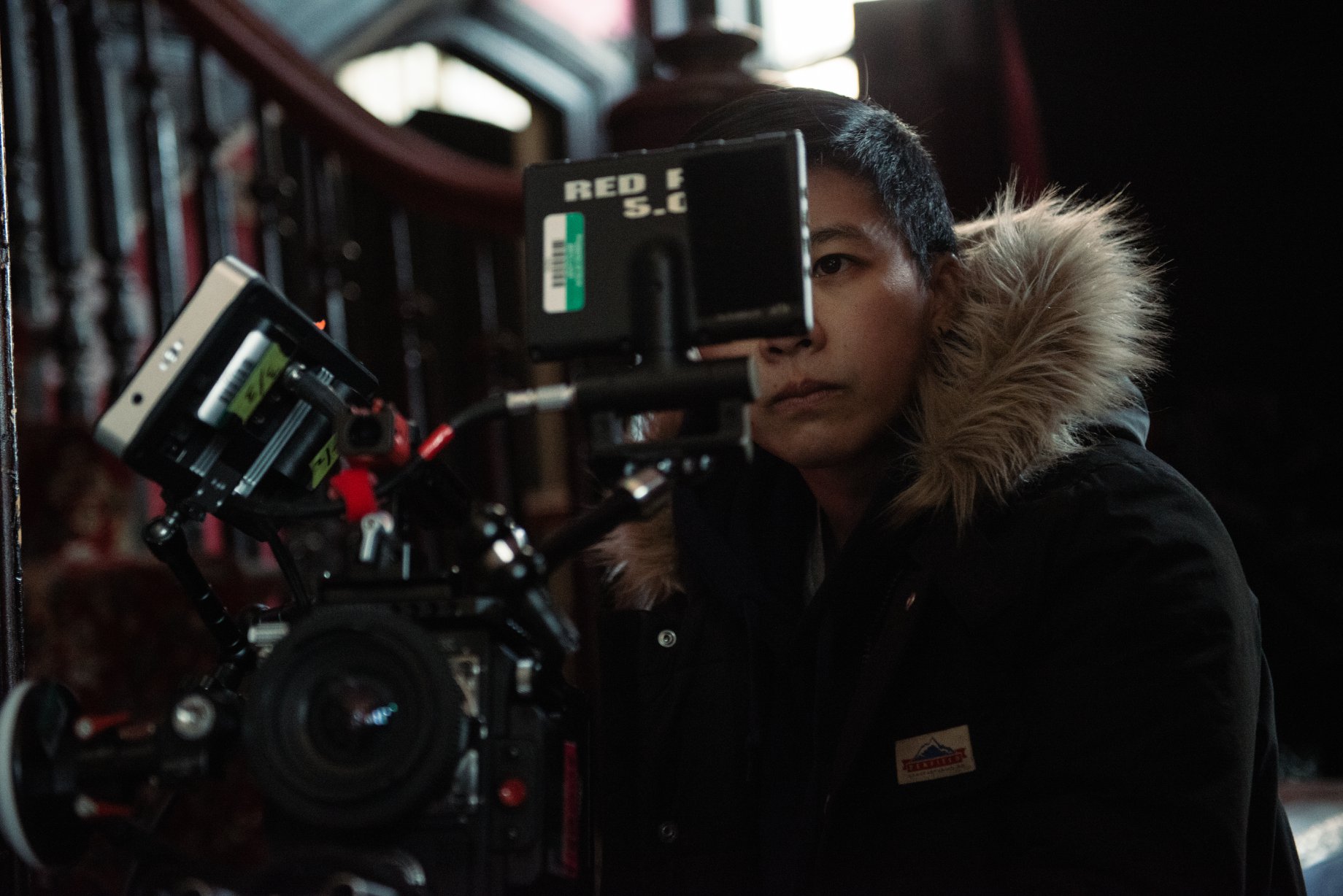 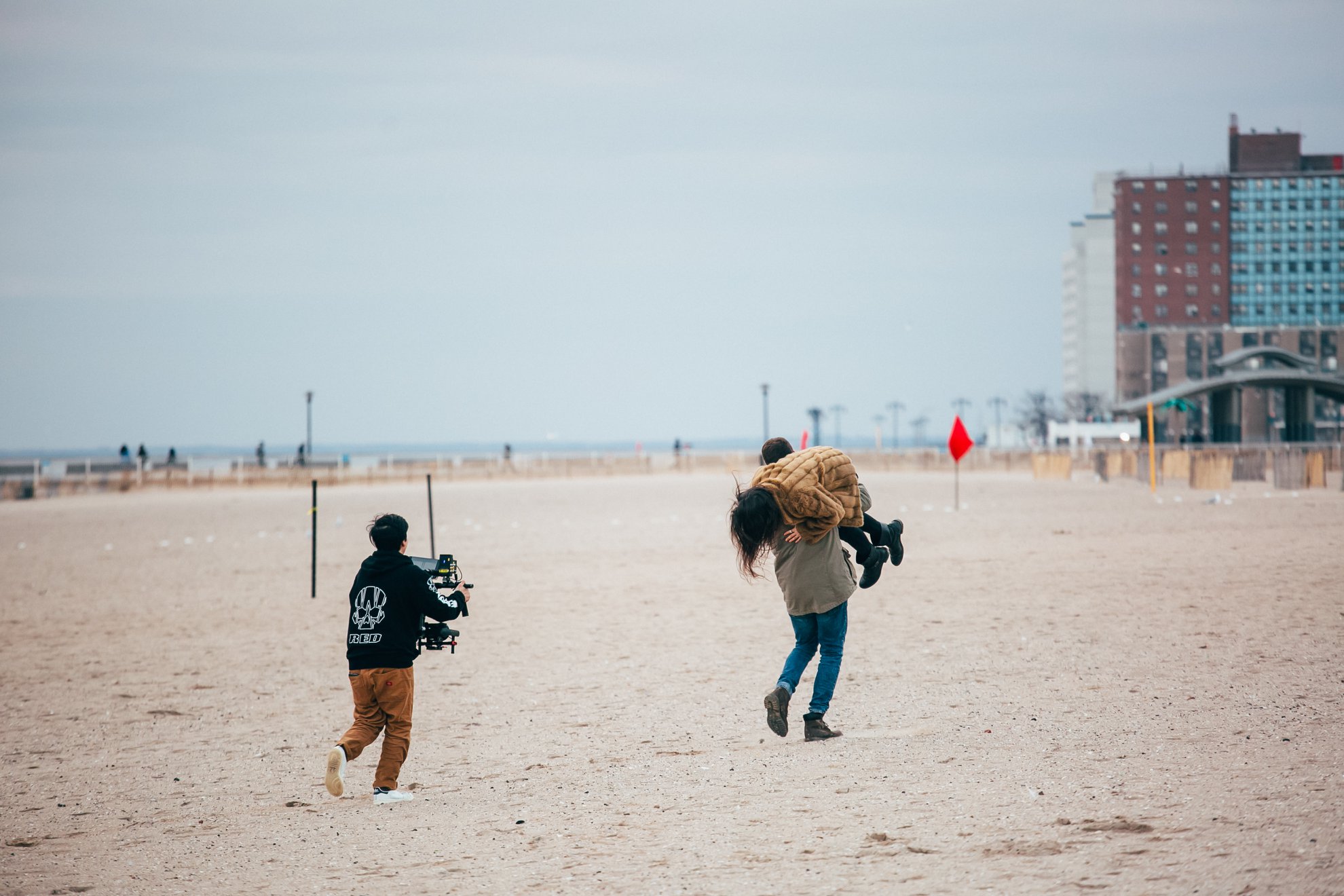 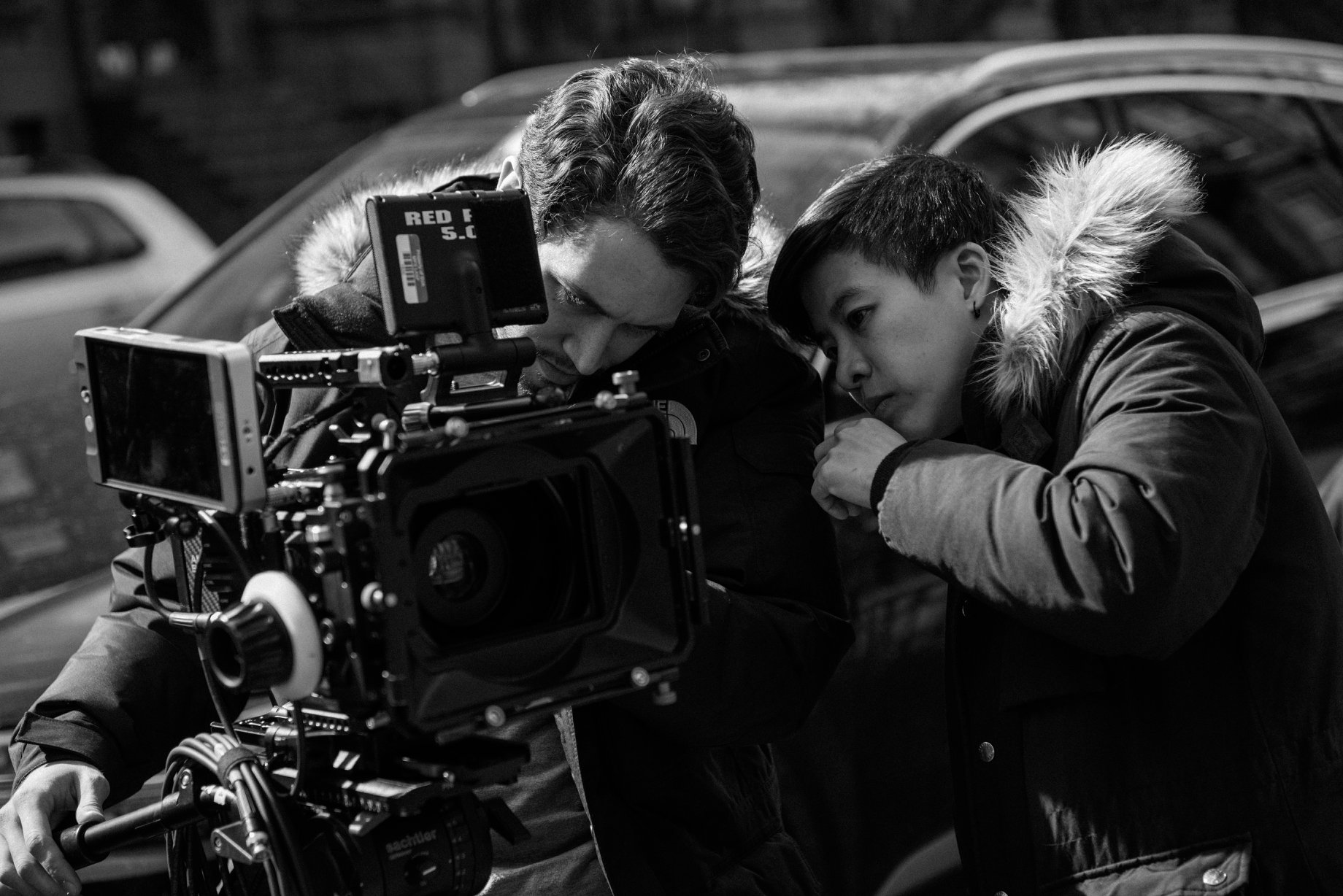 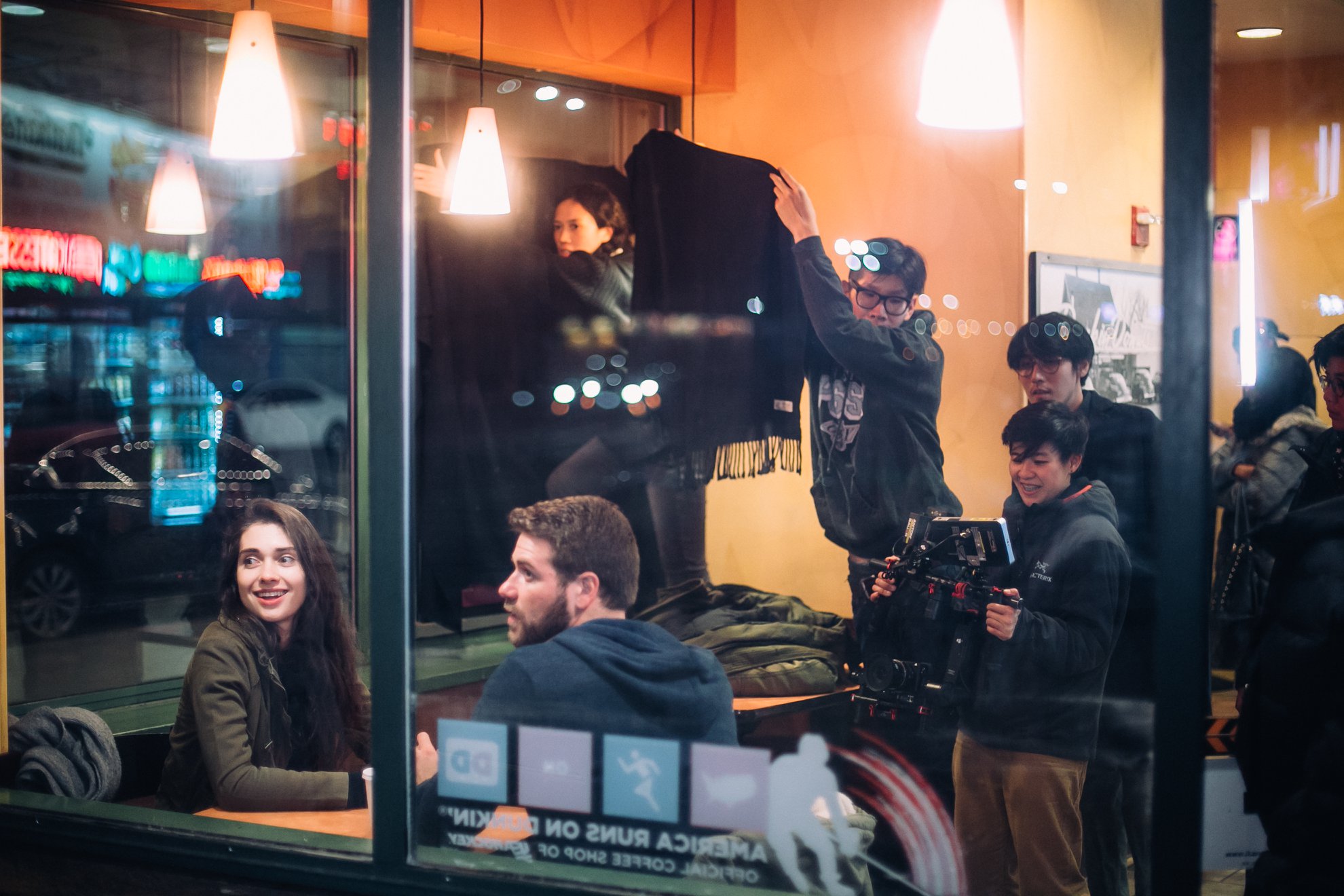 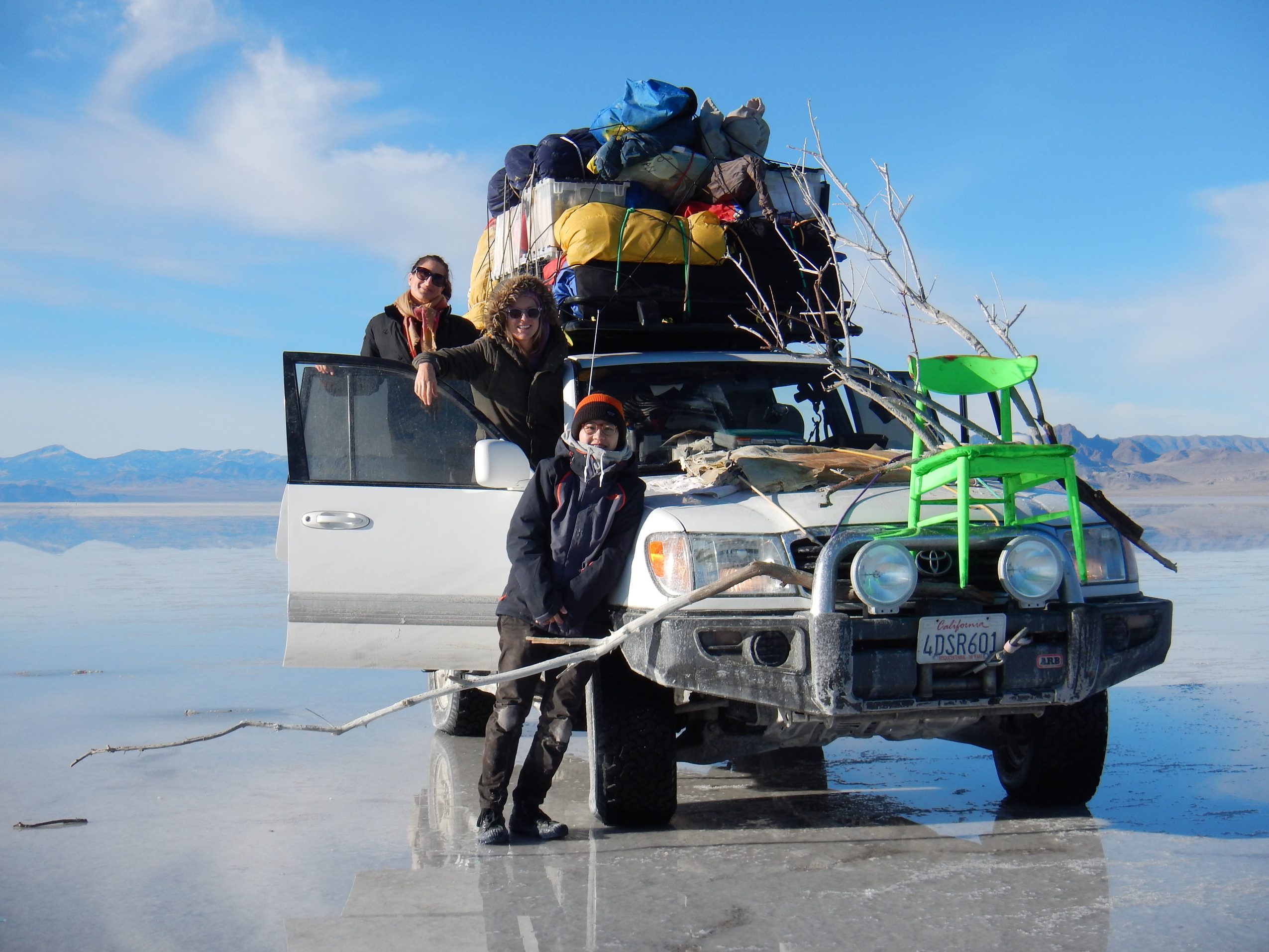 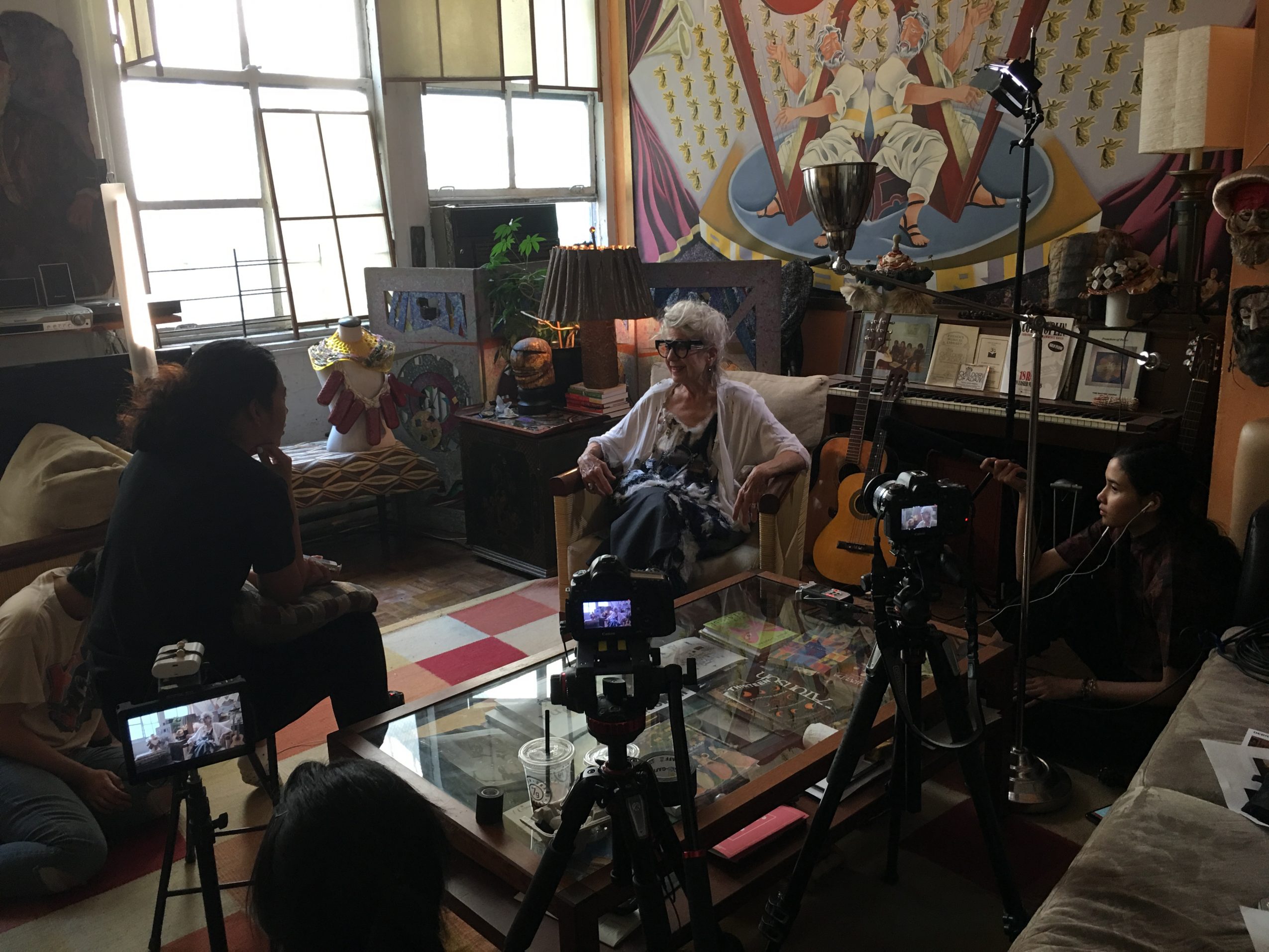