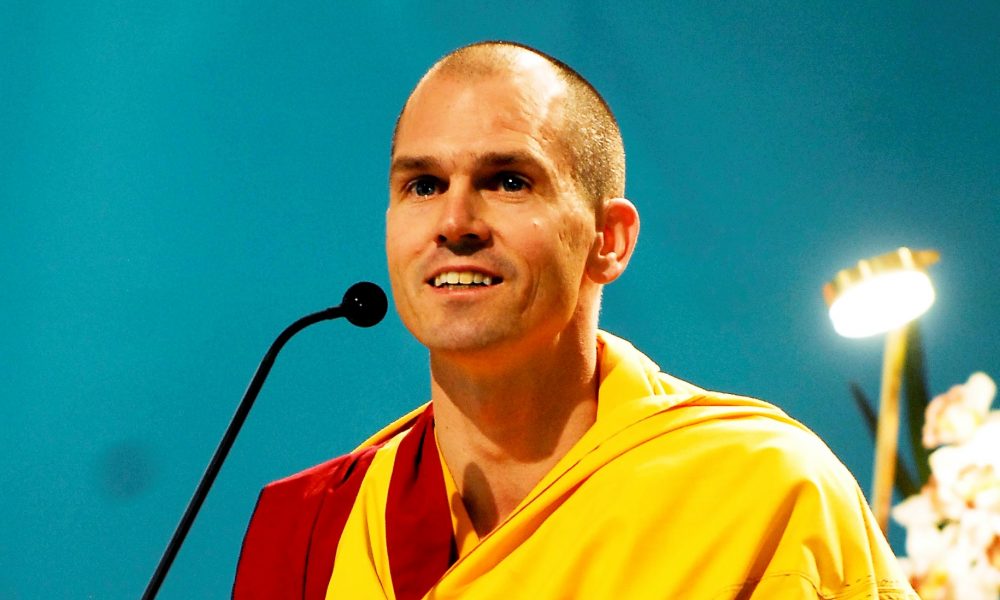 Today we’d like to introduce you to Kelsang Rigpa.

Kelsang, can you briefly walk us through your story – how you started and how you got to where you are today.
How did a Kadampa Buddhist Temple for World Peace arise in Los Feliz, Hollywood?

Buddha originally gave teachings in India, over 2600 years ago. Those teachings subsequently spread to Tibet and other eastern countries, only moving to the rest of the world quite recently. The history of the New Kadampa Tradition in America, and now Hollywood, can be traced to 1977. At this time, Geshe Kelsang Gyatso, who lived in India at the time, accepted a request to teach in the West, leaving his home, his Teacher, his family, his culture and everything he knew to give Buddha’s teachings to a group of students in a castle in the Lake District of rural England. Subsequently, over the course of the next 36 years, “Geshe-la” as he is affectionately called, has worked continuously to help Kadampa Buddhism spread throughout the world for the first time. In 1991, Geshe-la gave his inaugural teachings in the United States to a group of 50 students in Seattle, Washington. Later, Venerable Geshe-la would return to live as a Resident Teacher in Dallas, Texas, subsequently teaching to larger audiences throughout the United States and the world. Through Venerable Geshe-la’s dedication and loving kindness, a Temple has now arisen in Hollywood, California. Kadampa Meditation Center Hollywood is the result of the efforts of countless people over the past thirty-five years. See below for a more detailed timeline of events…

1991, Seattle – Venerable Geshe-la gives teachings in the United States for the first time at Bliss Hall in Seattle.

1994, Los Angeles – Khandakapala Buddhist Center is founded by Geshe Kelsang Gyatso before any classes have begun.

1995-1996, Santa Monica – A successful series of classes is held at a Unitarian Church.

1997-1999, West LA – Classes are held at a residential home near Westwood, LA, and at other branch venues in the city.

1999, Calistoga – An International Kadampa Buddhist Festival is held with Venerable Geshe-la, and over 800 people attend.

1999-2001, Crenshaw – Classes are held at a residential home with seven residents in Crenshaw, Los Angeles, and at other branch venues in the city.

2002, Downtown LA – An International Kadampa Festival is held at the Westin Bonaventure Hotel with over 1700 people.

2008 – Present – All of these Centers and their branches continue to benefit people throughout the Los Angeles region. See below for the Temple project timeline…

February 2013 – On February 7th, using the internet, Venerable Geshe-la locates a Temple property at 4953 Franklin Avenue in the charming and diverse neighborhood of Los Feliz in Hollywood, California. On February 8th – through the extraordinary kindness of the New Kadampa Tradition’s International Temples Project – KMC-California purchases the property for $1.75 million dollars and Kadampa Meditation Center Hollywood is born.

Originally a church built in 1937, KMC-Hollywood offers prime visibility on a busy east-west thoroughfare in a popular, trendy section of LA. The Meditation Hall features 25-foot high, vaulted, original wood ceilings, stained glass and seating for 250 people, including a balcony area. There is a small house on the property which will be renovated to accommodate three residents. The second floor of the Temple, behind the balcony, will be renovated to accommodate four residents.

March 2013 – On March 15th, after a productive and highly effective month of closing negotiations, we receive the keys to the new Temple from the previous owner, Metropolitan Community Church LA. The new Center is named “Kadampa Meditation Center Hollywood”, and on March 25th, 75 people from our community enjoy the space for the first time with an Offering to the Spiritual Guide puja. The Buddhas are invited into the Meditation Hall, and Kadampa prayers echo in the new Temple. Venerable Geshe-la sees a picture of the gathering and is completely delighted!

May 2013 – The 8-foot Buddha Shakyamuni statue is “born” in the statue-making foundry at Manjushri KMC in England. The Mantra Rolling Project commences at KMC-California, where many students are trained and begin rolling mantras for the 8-foot Buddha Shakyamuni, as well as for the 5-foot Tara and Avalokiteshvara statues. (The kind artists worked for many months in the Art Studio to prepare the statues, which arrive in a port near LA in Autumn. When the Buddha arrives, a different set of Kadampa artists visit LA for a few weeks to finish the painting, gilding and subtle features of the adornments. Eventually the Buddha statue is carefully hoisted into the shrine cabinet and filled with precious substances and mantra rolls for the November Grand Opening.)

June 14, 2013 – A beautiful 4′×8′ banner on the corner of the property publicly announces the arrival of Kadampa Meditation Center Hollywood. Within minutes of the banner appearing, local residents walking and driving by express their enthusiasm and support for the new Temple. Thousands of cars a day now see this banner, which reads, “Kadampa Meditation Center Hollywood – Study & Meditation Programs in Modern Buddhism”.

June 15, 2013 – 170 people gather for a Fundraising Event entitled “An Evening of Benefit & Bliss”. The evening is an off-the-charts success, a powerful and joyful celebration filled with inspiration, generosity and a palpable recognition of the great kindness of the ITP and our worldwide Kadampa community. The event features delicious food cooked by professional chefs from within our community, as well as a generous donation of food from a local Thai restaurant owned and run by a Buddhist family. Cameron Mathison is the host for the evening which includes a raffle and silent auction, with various items donated from Sangha and local business owners.

The Resident Teacher, Gen Rigpa, gives a talk explaining the worldwide significance of this Temple. The talk concludes with 170 people engaged in a soaring and deeply moving collective chant of the mantra of compassion – Om Mane Padme Hum. The Administrative Director, Erica Schieferstein, and Fundraising Coordinator, Neil Toyota, give an inspiring presentation on the details of the forthcoming renovation project and projected Grand Opening plans.

The financial goal for the evening was $10,000, and we made over $33,000! Thank you everyone for your generosity and support!

September 21, 2013 – 100 people participate in the 1st Annual Walk for World Peace. Starting at KMC Hollywood, we loop to Vermont Ave., up to Barnsdall Art Park, down Hollywood Blvd., and back around to the Temple. In another stunning show of generosity, this event raises $38,000 for the Temple renovations!

November 29, 2013 – Grand Opening – Gen-la Kelsang Dekyong, the General Spiritual Director of the NKT-IKBU, formally opens the Hollywood Temple with a Ribbon Cutting Ceremony followed by a weekend of teachings on Modern Buddhism and the path Tantra.

December 2013 – April 2014 – Temple renovations continue, as the front wall of the main building is completely stripped of stucco, and embedded within it is a steel framework. The steel serves as the support structure for the shelves that hold the precious, freshly gold-leafed Deer and Dharma Wheel adorning the exterior of the Temple. (A new team of Kadampa artists kindly appeared to gild our precious and holy Deer, Dharma Wheel and Vajras!) The steel also supports the new shelves for the statues within the newly created shrine cabinet. Three beautiful and powerful three-and-a-half foot-tall Vajras and their bases are gilded and skillfully installed on the Temple roof. The Buddhas are encased in glass, with a beautiful, ornamental vinyl design decorating the top of the glass. The exterior of the Temple is painted, the bookstore is created, the ritual prep room and office are completed, and many other improvements are made to the interior and exterior of the Temple property.

April 15, 2014 – On Buddha’s Enlightenment Day the community engages in the chanted prayer practice of Offering to the Spiritual Guide to mark the beginning of this new, inspiring phase of Kadam Dharma in Los Angeles. KMC Hollywood becomes a public Temple, as meditation classes begin on the 16th and the doors are officially opened to all!

Present – we now have 50-60 people attending our main classes each week on Sunday morning and Monday evening, and special events with 150-200 in attendance.

Overall, has it been relatively smooth? If not, what were some of the struggles along the way?
One of the struggles to KMC Hollywood arising was finding it! Initially we were looking for a storefront commercial space, but we encountered many obstacles finding a suitable space that was properly zoned, was big enough, with adequate parking, and affordable. From 2012-2013, we looked at literally hundreds of places in person, and thousands on-line before finally turning our attention to the church on Franklin Avenue in Los Feliz.

Kadampa Meditation Center Hollywood – what should we know? What do you guys do best? What sets you apart from the competition?
In terms of what we do, or specialize in:

We are known for giving people very useful psychological tools and ideas to use in the midst of their daily life. We also known for doing so in a way that is practical, kind and not pushy or preachy.

Kadampa Meditation Center Hollywood is a Temple dedicated to bringing peace and happiness to the world, and to removing suffering, through offering the methods of meditation and modern Buddhism. We aim to teach people how to develop pure, positive states of mind, giving practical tools to transform the difficulties of everyday life into an opportunity for personal growth and transformation. We wish to inspire and empower people to reach their full spiritual potential in order to be of greatest benefit to their family, friends and the world.

We envision Kadampa Meditation Center Hollywood as a place where hundreds, and eventually thousands, of people gather in order to improve the quality of their minds, thereby transforming themselves and the society in which they live. We envision a diverse, joyful spiritual community where everyone is welcome to learn constructive new thoughts, attitudes and meditations that lead to authentic, lasting peace of mind and mental freedom. We envision a community of people who are increasingly motivated to love and benefit others.

Our vision is to achieve peace in our world by teaching scientific methods that transform individuals, and therefore society, one mind at a time. In this way, inner peace will naturally lead to outer peace.

What are we most proud of as a company?
Our intention to help all people, of all backgrounds, to find true, lasting peace and happiness from within. It’s a truly extraordinary goal, wishing to give people the internal methods to alleviate their suffering and attain the lasting happiness of full enlightenment!

What is “success” or “successful” for you?
Success is any experience that you learn from and that guides you along the spiritual path. If you learn from it, grow, and become a better person, then it’s a success. Then, whether a situation is easy or challenging, painful or joyful, boring or outrageously stressful, it can be transformed into a success through developing a positive attitude of seeking inner development through that experience.