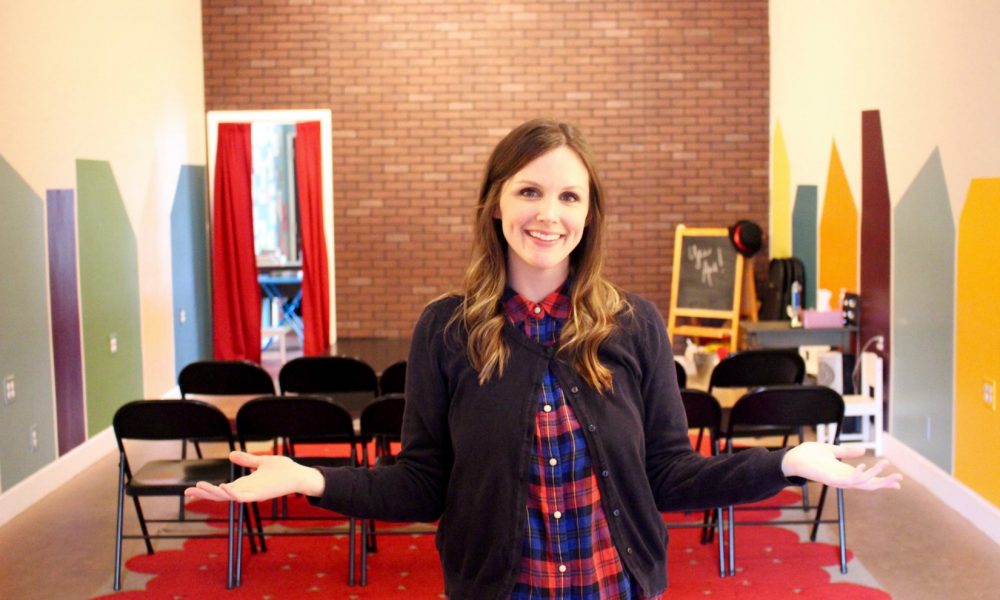 Today we’d like to introduce you to Katy Chase.

Thanks for sharing your story with us Katy. So, let’s start at the beginning and we can move on from there.
My husband Ryan and I opened Studio LOL in May of 2010 in an effort to make a living doing the two things we thought were our greatest strengths and also the most fun — improv comedy and working with children.

We met at a commercial audition years earlier, where we were cast playing husband and wife. While pursuing acting work and improv studies, we both took side jobs working with kids. Sometimes I’d try teaching the little ones I was nannying some improv exercises, and I noticed how much they loved it and would ask for more. It occurred to me that some sort of improv studio for children might work really nicely in LA. Of course I assumed that there were hundreds of places already doing it, but a google search later I realized that you couldn’t really find any improv training that was specifically designed for young people. I mean you can always find a general improv class in any sort of performance related program, but our vision was for a studio that focused on just improv and just kids, and we felt there was a gap in the market. So, on somewhat of a whim, we opened Studio LOL. “Studio” because we launched in Studio City, where we’ve both lived for many years. And “LOL” because way back in 2010, IT WAS A REALLY COOL THING TO SAY.

It took about six months of just kind of offering whatever free or deeply discounted workshops we could, as often as we could, but after that we found pretty quick word-of-mouth success. Ryan and I are terribly awkward sales people with little to no business background (our expertise is strictly improv and kids!), so we’ve been happy to allow our company to grow at its own organic pace as more and more parents tell each other about what we do. Almost seven years later, we now teach about 125 kids every week throughout the year, with a few months of complete insanity sprinkled in over the summer with our popular summer camps.

This past April, Ryan and I welcomed a little baby boy to our family, so 2015-2016 ending up being a time of hiring and training a qualified staff to help ease some of our teaching load. Up until that point, we’d been teaching 100% of the offerings at our studio. Handing over the reigns a little bit was a big adjustment for all of us — the students included — but we’ve found a nice balance, and it’s been an exciting new challenge to help other excellent teachers learn and implement our program the way we like it to run. It definitely makes us feel like there’s lots of possibility for more growth.

Great, so let’s dig a little deeper into the story – has it been an easy path overall and if not, what were the challenges you’ve had to overcome?
Overall we’ve had a pretty smooth road, as far as running a business goes.

I’d say our one continuous hurdle has been messaging. When you own a company that offers training to children for a performance skill in Los Angeles, people can make some assumptions about what that means and about what kind of kid would be a good match. I know sometimes parents can think, “Oh, comedy isn’t something my kid would be good at or interested in.” It can be tough for us to articulate how much the “being hilarious” part is not something that’s required or focused on at our studio. We genuinely feel that the benefits of improv extend far beyond trying to be funny, and we approach our teaching with that in mind. We’ve always felt like our little mission was to bring improv to everyday kids in a way that encouraged them to be kind, smart, and comfortable in their skin. Improv requires listening, thinking quickly, working together, putting words to your emotions, being in the moment, and sitting in the feeling of being slightly uncomfortable, having no idea what you’re doing, and jumping in anyway. We see these skills as being vitally important to all young people — not just showbiz kids or class clowns. But it can be challenging to convey all of that to every parent who hears about us, sees our sign out front, or even calls to inquire. And I think for that reason, sometimes the idea of signing your kid up for a “comedy class” just flies right off the radar for a lot of families.

Please tell us about Studio LOL.
We very purposely offer only one thing at our studio: improv for kids. We don’t teach grown-ups, we don’t teach acting classes, and we don’t teach stand-up comedy. We’re known for our expertise in teaching the art of improv to children, ages 4 to 18. (We kick them out and send them off to college or The Groundlings when they turn 18!)

We specialize in translating improv training into something that kids of all backgrounds and interests can digest. So our style is to entertain our students while getting them involved. We aim to make every class at our studio one that is first and foremost a lot of fun. This means we’re very active in participating with the kids on stage. Our style is to teach within the madness, so we’re often coaching an improv scene in character, while we’re in it. It’s a lot of juggling, but it’s a lot of fun. And we all end up laughing at the ridiculousness.

Of course our job as teachers is to use all the fun as a means of masking the more important work we’re doing. As a business owner, I’m most proud of the impact we’ve had on some of our students’ development, as it relates to them growing up in general. We’ve been in business long enough now that some kids have spent the majority of their childhood with us, working on interpersonal skills and gaining confidence in who they are and what interesting and unique qualities they bring to the table — the “table” being both the stage and life. I’ve been on the receiving end of parent emails telling me how their child is now starting to make more friends in the neighborhood, or how they aced an oral report at school, or that they’re becoming more and more comfortable being their authentic, silly self around others now, instead of just at home. As completely cliché and corny as it sounds, these are genuinely the pieces of feedback by which we measure our success. My husband and I are really proud of what we do and the service we provide for the young people we teach. And now that we’ve joined the parent club, I think we understand even more deeply the value of having these kinds of services in our community.

Do you look back particularly fondly on any memories from childhood?
I guess now is as good a time as any to completely out myself as not cool.

Throughout my entire childhood, I was very involved in a creative problem-solving competition called Odyssey of the Mind. Each year, my friends and I would form a team and we’d spend the entire year preparing for the big event. There were two parts to the competition — a planned skit that showed off your solution to the problem they assigned, and a quick-thinking competition called “spontaneous” where your team was thrown a problem to solve on the fly. Most of my weird, funny memories from childhood revolve around these competitions and the preparation for our skit. One time we tried making a mask for a robot by paper mache-ing my brother’s face, but we forgot the Vaseline so it cemented itself to him and paramedics were almost called, but we were able to stick straws in his nose so he could breathe until we got it off. Another time I made some sort of bizarre costume out of that squishy egg crate material that made me look like I was a pineapple because I was supposed to be “Bob Dole Pineapple.” As in Bob Dole. As in Dole Pineapples. I’m sure in my mind it was the most hilarious political statement that’s ever been conceived.

Sometimes when I meet a really weird, marching-to-her-own-beat kind of kid, one of my insane Odyssey of the Mind memories pops in to my head and I think, “This girl is so me.”