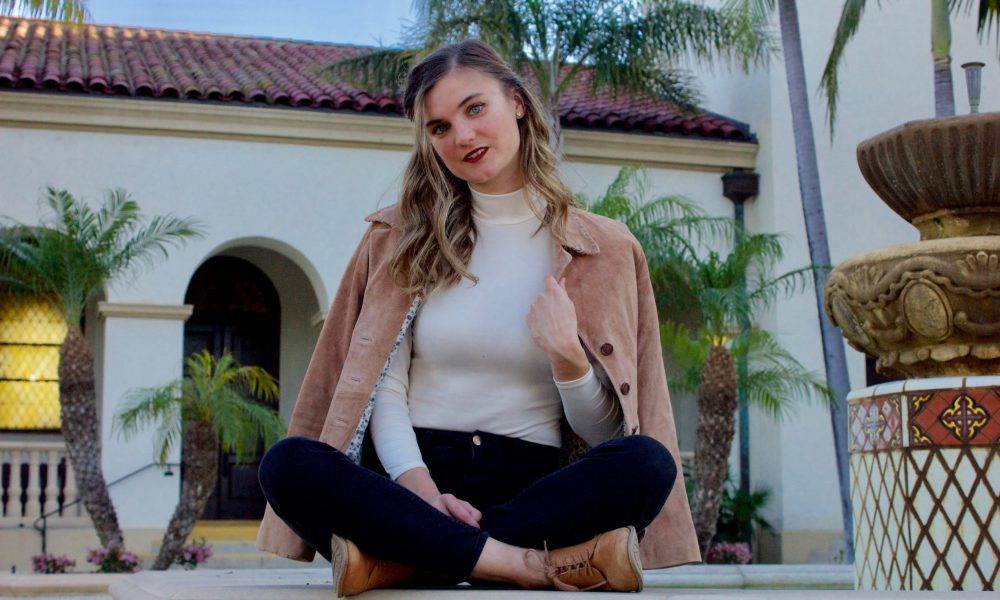 Today we’d like to introduce you to Katie Romanovich.

Katie, please share your story with us. How did you get to where you are today?
Growing up, I always enjoyed watching movies and TV shows. The TV shows I’d watch spanned all sorts of decades – “Three’s Company,” “The Dick Van Dyke Show,” “Friends,” and of course all the popular Disney and Nickelodeon shows from the 2000s. My dad has been producing for television for 30 years, so going to his events and sets throughout the years really gave me a first-hand look into this industry from a young age.

When I got to high school, I was involved in the improv troupe and theater department, where I was active both onstage and offstage. During this time, I became a true movie and TV addict. I was watching every sort of TV show, from “Seinfeld,” “Californication,” “30 Rock,” “Downton Abbey,” “That 70s Show.” You name it, I was watching it. I’d walk to the Calabasas Library and check out DVDs every week, which sounds pretty archaic now. Through my theater classes and my non-stop movie & TV fest in my bedroom, I came to learn that storytelling through filmmaking was where my true passion lied, and where I found myself to be the most fulfilled artistically. In our theater class, I was the producer of our student-run play, and my best friend Nick Trejo and I both directed, produced and starred in a 20-minute horror film for our final project. We laugh about it now, but we’re deep down still proud of it. Through these theater experiences, I was beginning to really see how meaningful films and shows can be in connecting with viewers and how a mirror can be held up to reality, which I found compelling.

I became even more determined to hone my craft any way I could throughout high school. I participated in an online screenwriting master class, I attended independent film screenings and Q&As, I read numerous autobiographies of some of the top women in television. I was so hungry to learn more about my passion and how to navigate this wild industry. When senior year rolled around, I made a short film that I did entirely on my own, based on a poem I read that had the most profound effect on me. I screamed when I got the email that it had been selected to be presented at the Calabasas Film Festival.

Once I headed to college as a film and television major at Cal Lutheran University, I knew that in an industry where everyone’s moving fast, I had to move twice as fast if I wanted to get ahead. My college career has been a non-stop rotation of classwork, student film work, and internship applications. My freshman year I worked as an intern for REELZChannel’s “Exposed with Deborah Norville;” sophomore year I interned for 20th Century Fox in their Animation Casting office; and finally now in my senior year, I’ve worked as CBS’ Current Programming intern, and currently I am interning at NBC in Casting. All of these experiences have broadened my creative horizon and shown me what it takes to be successful.

Great, so let’s dig a little deeper into the story – has it been an easy path overall and if not, what were the challenges you’ve had to overcome?
Through the internship application processes, I’ve really come to see the true competitive nature of this industry. Early on, I got to the final interview stage at Warner Bros. in two different departments and got rejected both times. That can make you question yourself, what you could’ve done better, what other people did that made them stand out more. I think rejection can sometimes cause creatives to be blinded to their accomplishments and growth, and I realized I had to zoom out and see how far I had come and how even getting those interviews was a success in itself. The major studios and networks have applicants from all over the country applying for a limited number of positions. I’ve really come to understand that rejection is inevitable in several aspects of this industry, whether you’re pitching a project, interviewing, auditioning, sending a film to festivals, etc., but that’s what makes the successes so good.

It’s funny, my freshman year I drew a little flow chart of what I wanted my college experience to look like as far as internships, year by year. I recently found it – three years later – and saw that all the companies I had written down, I had actually landed internships with: FOX, CBS, and NBC. It definitely felt like something out of “The Secret.” Things will manifest if you put it out to the universe. I remember being an underclassmen and talking to a girl in my news production class who was interning at NBCUniversal, my dream internship since freshman year. I thought she was the coolest girl ever. She really pushed persistence and how imperative it was to keep applying every semester. I remember her saying to me with assurance “you’ll definitely get it.” Fast forward to today, I’m interning in NBC’s Casting department, and it has been the most rewarding experience. I feel like getting that position was sort of an emblem of all the work I’ve put in and how things you want can only come to fruition if you keep progressing forward and looking to grow any way you can.

NBC Entertainment – what should we know? What do you do best? What sets you apart from the competition?
Being an intern at NBC has been such a valuable experience in seeing the casting area of network operations. I love actors and the art of acting, so getting to see how casting executives select actors for roles and their process for identifying the key person for a part has been fascinating. Each day, I curate lists of casting updates and premiere dates for the executives, as well as create up-to-date documents with all of the casting statuses for each of our shows. I welcome all actors and guests to the office and prepare the audition room for our network tests. I’ve gotten to attend table reads too, which are fun especially when you see all the actors together for the first time. We’ve started operating from home, so I miss the backlot a bunch. Working for NBCUniversal has really been a dream come true in so many aspects – everything I imagined.

What I think sets me apart from others is my intent to approach all sorts of work with a positive vibe. No matter how tedious a task may be, there is a positive perception I like to view things in where I feel gratitude for being where I am. I recognize that every single little task has a greater, beneficial effect, even though it’s easy to just see things at face value. I think you can apply that to all sorts of things in life. It kind of goes with the zooming out aspect I mentioned earlier about seeing the bigger picture.

What moment in your career do you look back most fondly on?
My proudest moment so far was getting selected to participate in the Film Studies Program for the 2018 Santa Barbara International Film Festival, which was the year honoring “Ladybird,” “Call Me By Your Name,” and “The Florida Project” – some of my favorites. We got to attend the festival for four full days, and we got to stay in a hotel which was awesome. 30 film students across the country got selected for the program, and we all got to go to screenings, panels, actor tributes, and more. We became really close, and it was such a memorable time that I know had the biggest and most inspiring impact on all of us. I learned so much and it was really a dream come true. 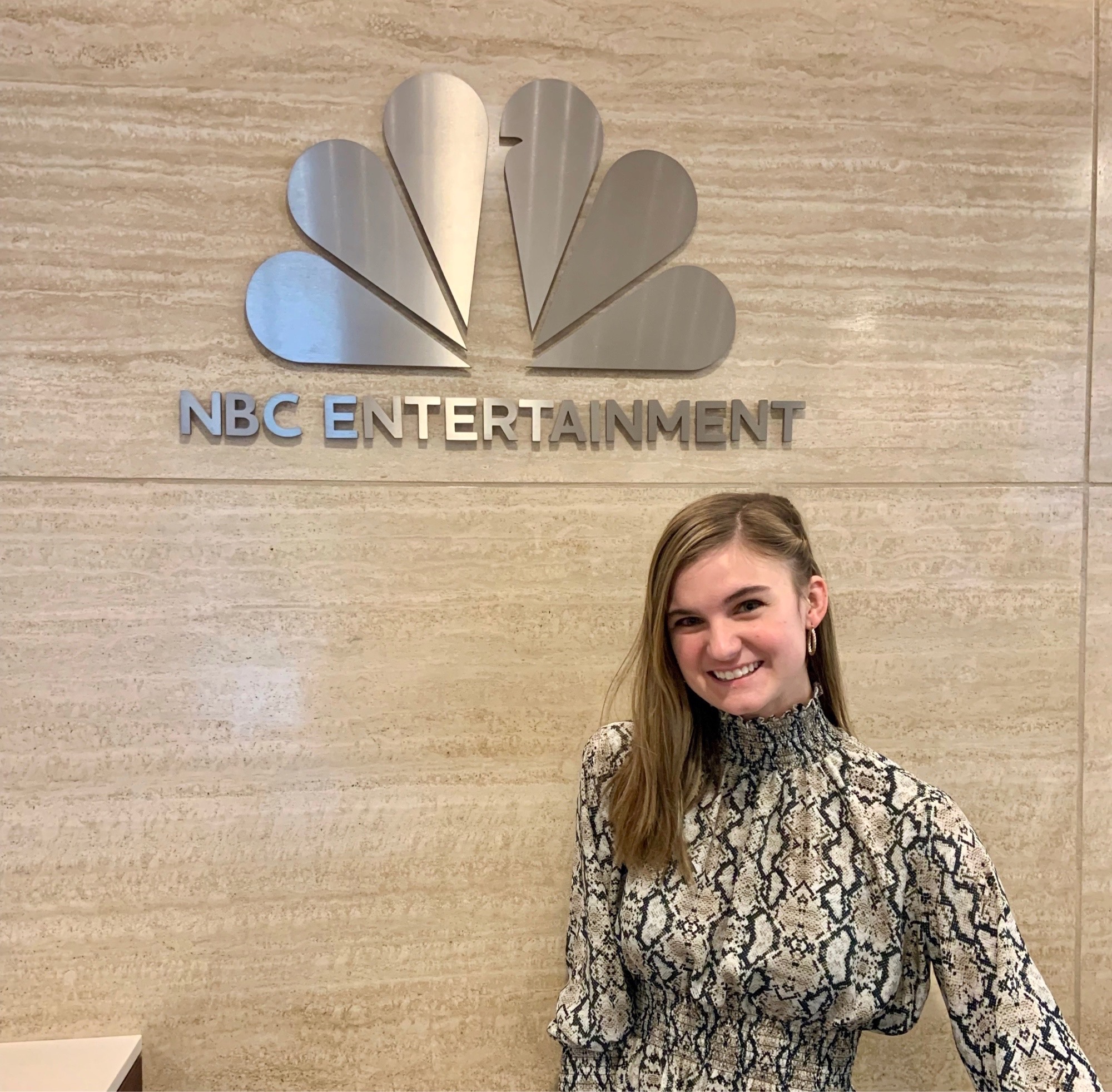 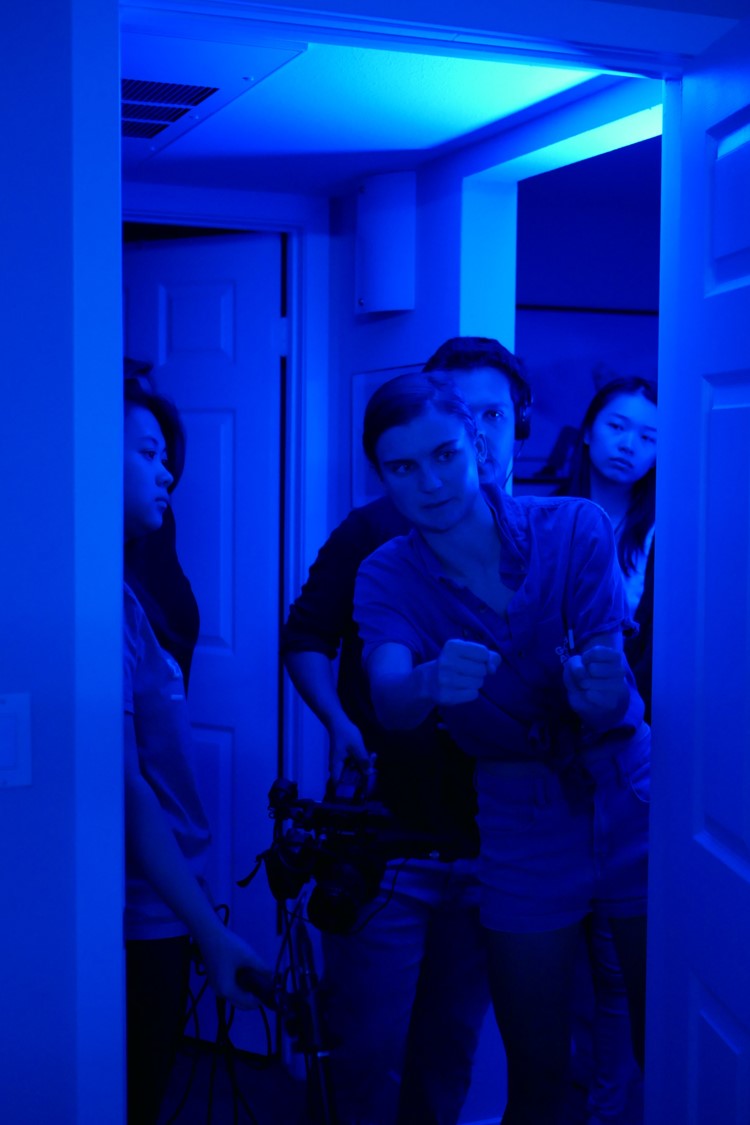 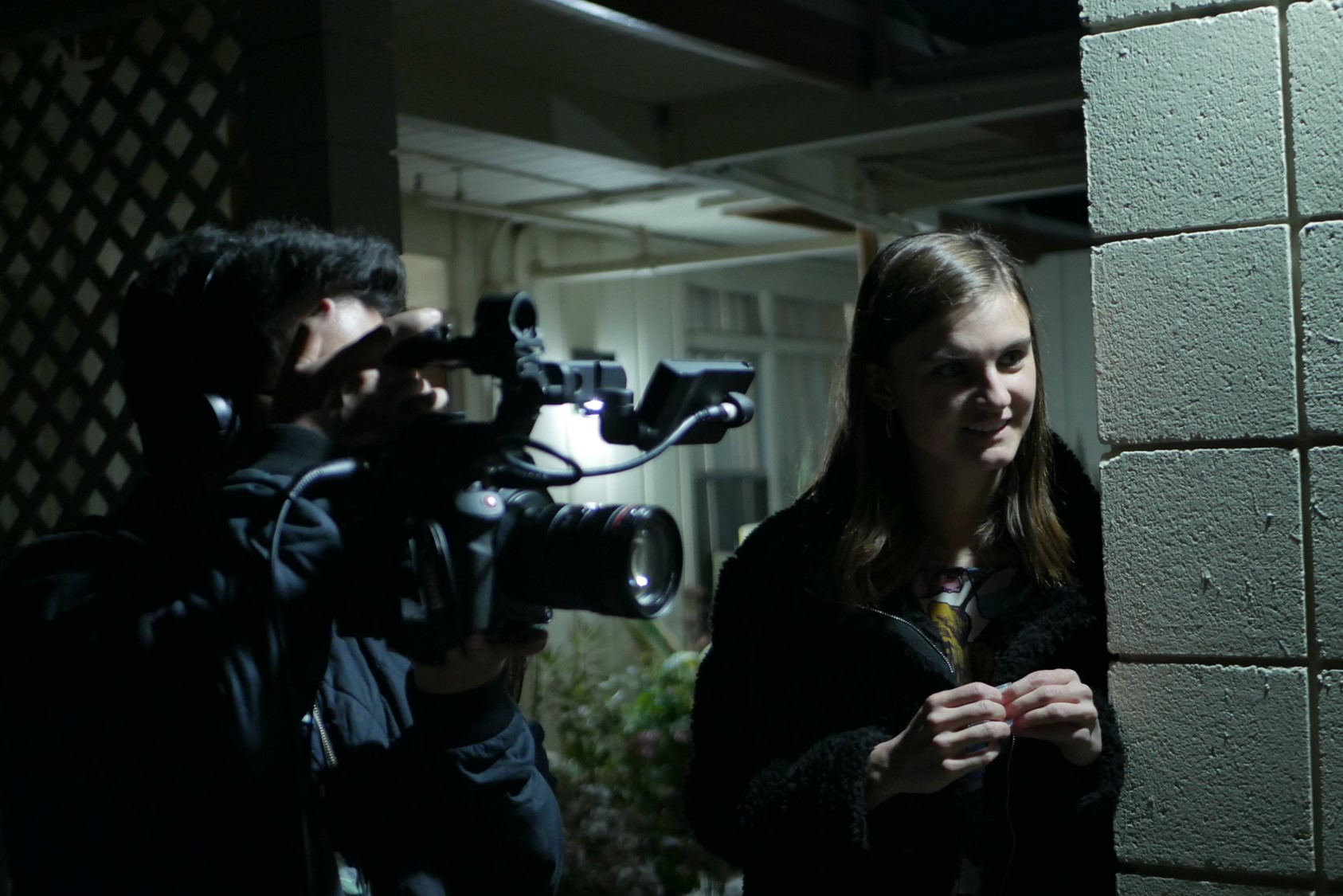 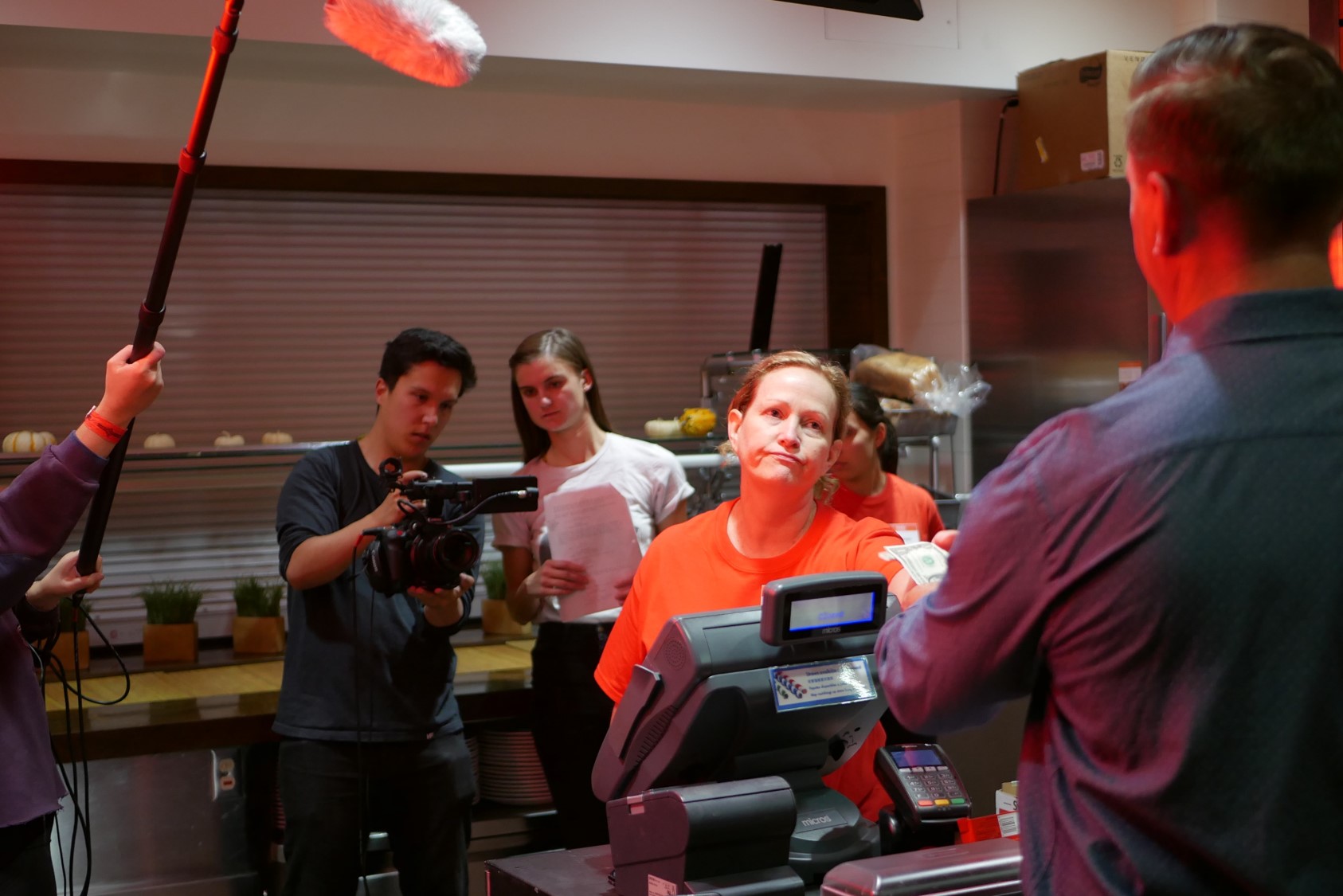