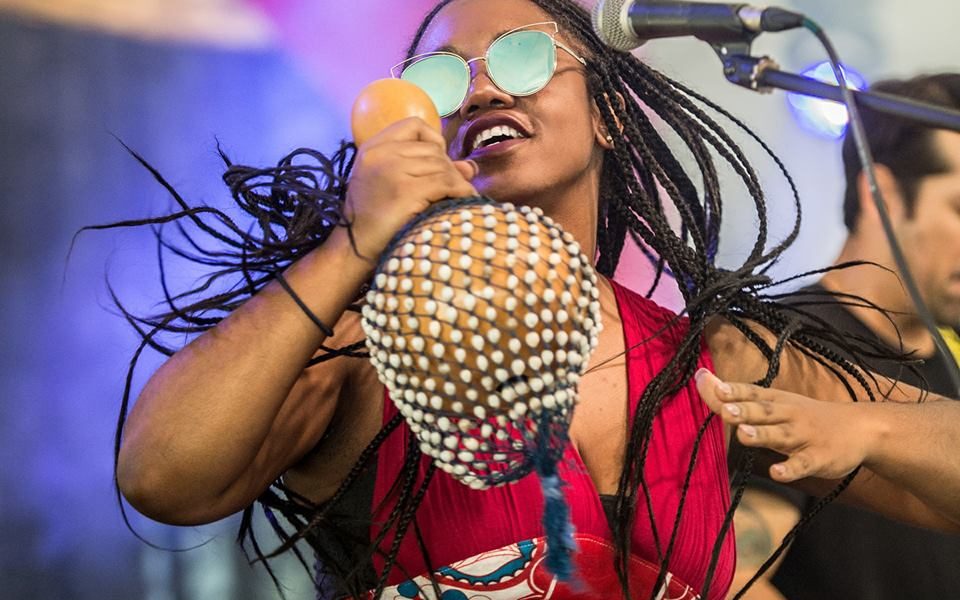 Today we’d like to introduce you to Kara Mack.

Kara, let’s start with your story. We’d love to hear how you got started and how the journey has been so far.
I was born and raised in Columbia, SC and I moved to Los Angeles when my Dad’s job transferred. I was in the 2nd semester of my 10th grade year in high school, and yes the transition was difficult. However, after graduating early and meeting many personal obstacles that let me know that I needed to go in a different direction as planned, I just simply started taking open classes at Debbie Allen Dance Academy when it opened. I met Jason Samuels Smith, a living legend in Tap Dance who was teaching there, and began singing in his group JaJa Productions in various clubs in LA. I began to dance in award shows through amazing dancer/choreographer Jeffrey Page after he saw me dancing in an open West African dance class. With everything that I do now in Los Angeles, it was all built around meeting people and building relationships or even someone seeing me do something and wanting to work with me. Still to this day, I have no agent or manager.

Overall, has it been relatively smooth? If not, what were some of the struggles along the way?
No it has not been a smooth road AT ALL, but I’ve learned to appreciate and enjoy the journey, so that’s what has kept my head up and in the game. When it comes to me as singer, it has been difficult to fund live music as an upcoming artist, while also trying to fund making albums. As a dancer/choreographer, I have chosen to focus my path on African Diasporic movement (a lot of styles under that umbrella), so it’s a road less traveled. A lot of people look at styles under that umbrella as not respected techniques, so it’s been difficult to be a career dancer of this genre of dance. As a Founder/CEO of Africa in America, it’s trying to navigate my way where I’m able to do everything that I want without seeming scattered and/or not focused.

Kara Mack – what should we know? What do you guys do best? What sets you apart from the competition?
Kara Mack, a true ‘southern gal, got her start in Columbia, South Carolina, her birthplace, performing for youth ministries, schools and conferences as a singer/songwriter, dancer, and poet. Since her move to Los Angeles, she has developed into a beautiful, budding artist. As a dancer she performed in several award shows including the 36th Annual NAACP Image Awards, the 2005 BET Awards, and the 2005 Billboard Music Awards. She has taught West African Dance and Dunham at Debbie Allen Dance Academy, and has assisted on the First and Second Annual African Dance and Music Festival. She was also an Artist-Residence for over 3 years for the renown “Theatre of Hearts” Program; a non-profit organization focusing on reaching the at-risk youth in Los Angeles through the arts. Also, for the past two years she has co-produced and directed the Fashion Extravaganza for Jewels Inc., a South Carolina charitable organization; whose mission is to inspire young people through the arts. Placing no limitations on her God given abilities, she also sings with JaJa Productions and has two albums currently out all over the world; her EP “Selah” and her debut LP “A Negroe’s Spiritual”. This singer/songwriter and spoken-word artist also currently sings background for Ghanaian superstar and Grammy nominated artist Rocky Dawuni as well and is set to release a mixtape this year. During her trip to Senegal, West Africa, Kara premiered her first single “I Love You So” from the mixtape on its number one network SenTV. She continues to work with major choreographers, like Fatima Robinson, for live performances by R. Kelley and the Clive Davis Pre-Grammy Party; and Jonelle Monae on American Idol. She recently collaborated with Fatima for Kendrick Lamar’s historic performance of “Alright” on the 58th Grammy Awards and for Gwen Stefani’s performance of “Misery” on The Voice. Her choreography is currently featured on three music videos that are shown all over the world this year, predominately in West Africa; including Ghana’s African Reggae Fever (Rocky Dawuni), African Thriller (Rocky Dawuni), FIFA World Cup Official Song performed by Shakira’s Waka Waka;, and Senegal’s number 1 song by Pape N’Diaye Rose. She recently worked with choreographer/creative director J.R. Taylor (J.Lo, Mariah Carey, etc.) choreographing a “Coming to America” theme for Snoop Dogg son’s birthday party and recently choreographed the Africa movement in Gwen Stefani’s performance of her hit song “Misery” on The Voice. Having trained in all African styles with dance masters from Brazil, Cuba, West Africa and Central Africa, her goal is to master them all dances of the African Diaspora; while showing the unity within being so spread apart. Kara Mack is also a successful producer/choreographer that premiered two sold-out performances of “The Essence” on September 29th and 30th, 2012. Choreographed, written, and directed by Kara Mack, The Essence is a unique approach to the retelling of the multiple realities of Africa. For the first time on a Los Angeles stage, dancers and drummers from West Africa, Brazil, Cuba, and the United States united for a single purpose. Her love for the African Diaspora led her to launch her brand and online magazine Africa in America in September 2014; which is a primary resource for both professionals and participants of African Diasporic music, dance, & culture here in America. She also launched during that time Africa in America’s Original Works Showcase for African Diasporic Music and Dance and this year celebrates its 4th year by being showcased for two nights in a row October 27th and 28th at Barnsdall Gallery Theater.

It is apparent that performing is natural; as she communicates with the confidence and style of a seasonal professional. Because of her style, you will immediately grasp the seriousness of this artist; which reveals the graces of a young lady determined to make her own niche in dance and the musical arena. With her jovial spirit, Kara, through dance and song, expresses her love for the rhythm in music, which is why she embraces and continues to learn more about the different forms of African dance. Kara believes that through her gifts she can stir up the gifts in young people; renewing hope in their hearts, inspiring them to reach for the impossible. Kara Mack is truly an artist you must personally encounter.

What is “success” or “successful” for you?
Success is having peace with yourself and your life. From an economic standpoint, I would like to not have to reside anywhere to be able to make money for my family. Also, success is seeing that my sons are equipped with the tools to be able to do exactly what God sent them here for in through me being their mother. Those are the most important markers for me in determining my own personal success.