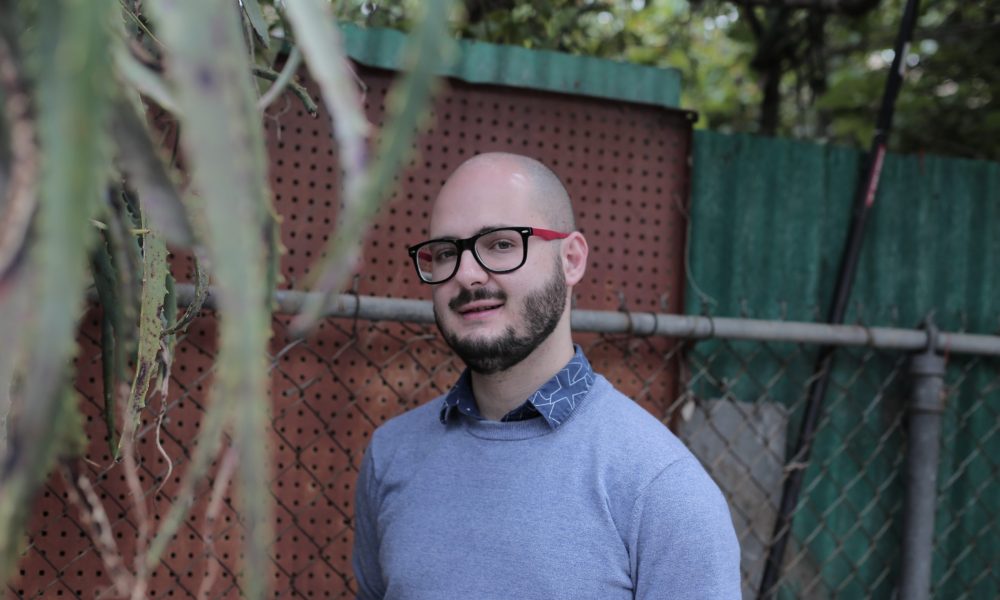 Today we’d like to introduce you to Jorge Molina.

Jorge, let’s start with your story. We’d love to hear how you got started and how the journey has been so far.
I was born in Mexico City, but I moved to a quiet suburb by its outskirts called Cuernavaca. I grew up there, I studied there, and I eventually also left there. I grew up on a steady diet of American television shows, cozy British murder mysteries, and whimsical cinema. Pushing Daisies, Agatha Christie, and Amélie were as foundational for my education and development as anything my parents or my school could have ever taught me.

At the beginning of high school, I enrolled in a Creative Writing course that changed my life. I found an outlet for the angsty teenage ruminations and fears I thought only I had and learned how to shape them into something that could pass as entertainment. With the guidance and support of my teacher, I won the prestigious Juan Rulfo National Short Story Award twice in a row, which was published as part of several anthology collections from the Universidad Iberoamericana.

Shortly after the realization that the movies and shows that consumed my life had to be written by *someone* dawned on me, and it was game over from then on.

My father told me that unless I got a full-tuition scholarship (a very unlikely, almost impossible feat), I would just not be able to go to a film school in the US. He thought he was making a threat; I took it as a dare. Somehow, after what feels like a fugue state of personal essays and reference letters, I received a full-tuition merit scholarship from the USC School of Cinematic Arts and became the first Mexican student to receive that honor in that program in over a decade.

I’d never even written a screenplay before, and I suddenly was being taught by the same people that had written the very shows I grew up hypnotized by. But by then it was imprinted on me that it was the career I wanted to take. I just didn’t know what form it would take. I tried my hand at historical dramas, teenage comedies, slasher films, and romantic epics. I think they were somewhat decent.

However, while in college, I took an internship with the Gay and Lesbian Alliance Against Defamation (GLAAD), and I started to discover the power that entertainment, and the representation within it, hold over the personal histories of people. The movies and shows and books I grew up on had affected me in larger ways than I had contemplated: they were the language I learned to speak to understand and process the world around me. I began to understand the true power of the industry I wanted to go into and to take it seriously.

After graduation, I fell into the film festival world, more out of necessity than true calling (I needed a job to keep my student visa valid). However, I found that it is an incredibly welcoming, satisfying, and complex world to develop professionally. It is a perfect balance of curating and showcasing new voices and filmmakers, and logistical production work, both of which I enormously enjoy. It’s usually these places that start to shape narratives around movies and the people behind them and give a place to people that maybe haven’t had one before. I’ve participated in places like Outfest, the Guadalajara International Film Festival in Los Angeles, and the TCM Film Festival.

In my most creative role in the festival world, I recently worked in the 2019 Los Angeles Latino International Film Festival, overseeing the short film and feature film submissions, and works alongside a team of experienced programmers to select the best to showcase at the festival. In a larger way than ever, I’m now helping to shape and uplift the narratives and stories that move me, in small though I’d like to think meaningful ways.

But I have not forgotten writing. It’s always been my first passion, and I’ve been able to tap into it in small ways. Like becoming the Translations Coordinator at the non-profit activist production company Optimist for their upcoming documentary. And I’ve done some script translation work for the festivals I’ve worked on, as well as some streaming series, and written some episodes for the true crime and historical podcast network Parcast.

However, this year has taken somewhat of a turn. My feature murder mystery script “Detective James Mortensen and the Case of the Golden Candelabra” was accepted into the prestigious Outfest Screenwriting Lab. Only five scripts are selected out of hundreds of submissions every year. It is a deconstruction of the Agatha Christie novels I read growing up, in which a young Boy has to escape into a whodunit world after the death of his older brother. I don’t think it’s a coincidence that my most personal work, which directly tapped into my childhood influences, is the one that has opened the most doors thus far.

Also earlier this year, I wrote and executive produced the short film “Muy Gay Too Mexicano”, about a young man who has to reconcile his two battling identities, which also happen to be his roommates. The short will premiere in the fall of 2019 and has started to make the rounds in the international film festival circuit. And alongside another immigrant artist, Lorena Lourenco, I co-founded IMFest, an organization for and by young immigrant artists that showcases their art and connects them with the larger Hollywood community.

I know first-hand the impact and power a dark room and a compelling story can have on a person. I wouldn’t be trying to do this as a career otherwise. And I’ve wanted to hold that power ever since I knew it existed. I keep looking for opportunities that can help me nurture, properly guide and grow not only my own writing into that power but also other voices that haven’t had had a chance in the past.

We’re always bombarded by how great it is to pursue your passion, etc – but we’ve spoken with enough people to know that it’s not always easy. Overall, would you say things have been easy for you?
It certainly hasn’t been.

While I know that I have been afforded tremendous opportunities that other people fight for every day, it still hasn’t been a smooth road. It was hard work trying to translate my abstract dream of going to Hollywood to write into a scholarship that I had to maintain at all times while trying to figure out a new life, and a new identity outside of the only environment I had always known.

And as it has become painfully obvious for the past few years, it’s not hard being an immigrant right now, in any form. Making the jump from a student visa from a work visa was an extremely strenuous, stressful, and complicated legal procedure. It’s also something that, by putting your future in someone else’s hands and turning over a document with basically your entire life history in it, also makes you extremely emotionally vulnerable, much more than I expected. It’s a hard state to be living in 24/7 for six or seven months, at the very least.

However, like I said, I am lucky that fortunately things have worked out, and I’ve come out stronger and wiser on the other side.

Please tell us more about your work, what you are currently focused on and most proud of.
A large part of the work I do is individual, either rotating from festival to festival in various positions, or as a screenwriter looking to establish myself as a voice in Hollywood.

However, going through the immigration process made me realize how lonely, scary, and isolating that process can be without any guidance or community, which is why I decided to create (alongside my friend Lorena) the group IMFest. It brings together immigrant artists about to go, currently undergoing, or that have already gone through these legal procedures to offer advice and support. We also see it as a networking opportunity to connect diverse talent and will start to offer spaces and events to showcase each other’s work.

I am so proud of the response it has gotten, and that it tapped into a need that people didn’t know they have been wanting. While the process doesn’t become less complicated by any means, having a support network around you does make it less stressful and intimidating. I am also really happy about the connections being made, and the role we could play in highlighting or helping create new projects.

So, what’s next? Any big plans?
I want to keep working in the film festival world, hopefully expanding both in the scope of work and location. I have only done LA-based festivals thus far, and I’d love to try my hand on bigger places outside of it. I want to continue playing a part in curating things that are played and help others discover things that move me or speak to me.

I also want to continue developing my writing career. The script that got into the fellowship has fortunately gotten me so traction, and I want to capitalize on it. Our short was just submitted to a large group of festivals, and we are awaiting responses. It’s weird being on the other end of that relationship. I have several writing projects in development, from a pilot set in 1940s Hollywood to a modern-day gay adaptation of an Agatha Christie story (I can’t let her go), to a surreal idea about a play involving the members of ABBA. It’s a great time to have ideas and to be a storyteller.

But in the big picture, I want to really have a hand in creating the entertainment that will affect and move the next generation. I want my stories to be part of someone else’s. I learned the language of entertainment while I was very young, and every day I work towards becoming as fluent as I can be on it. 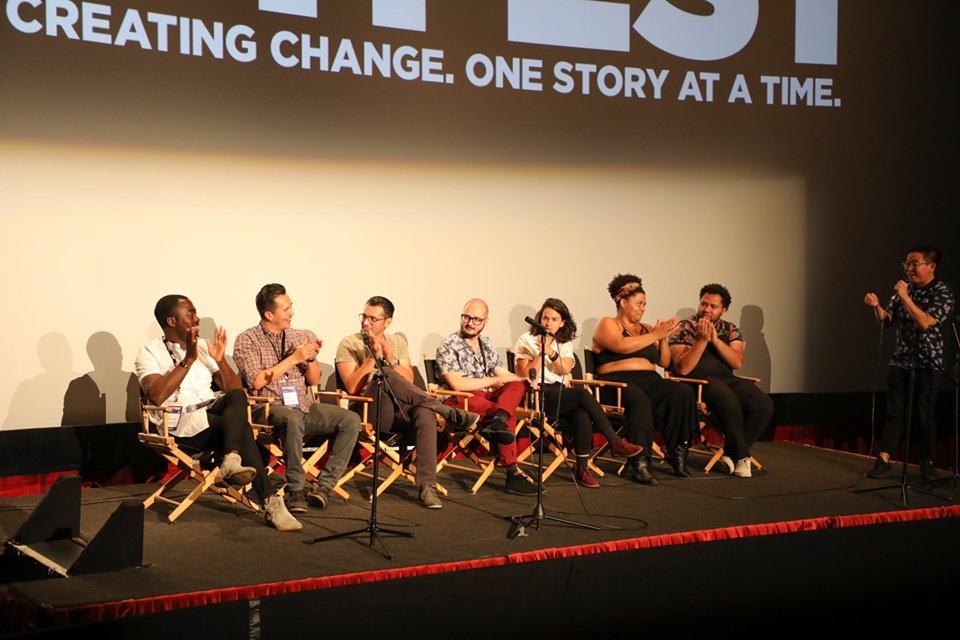 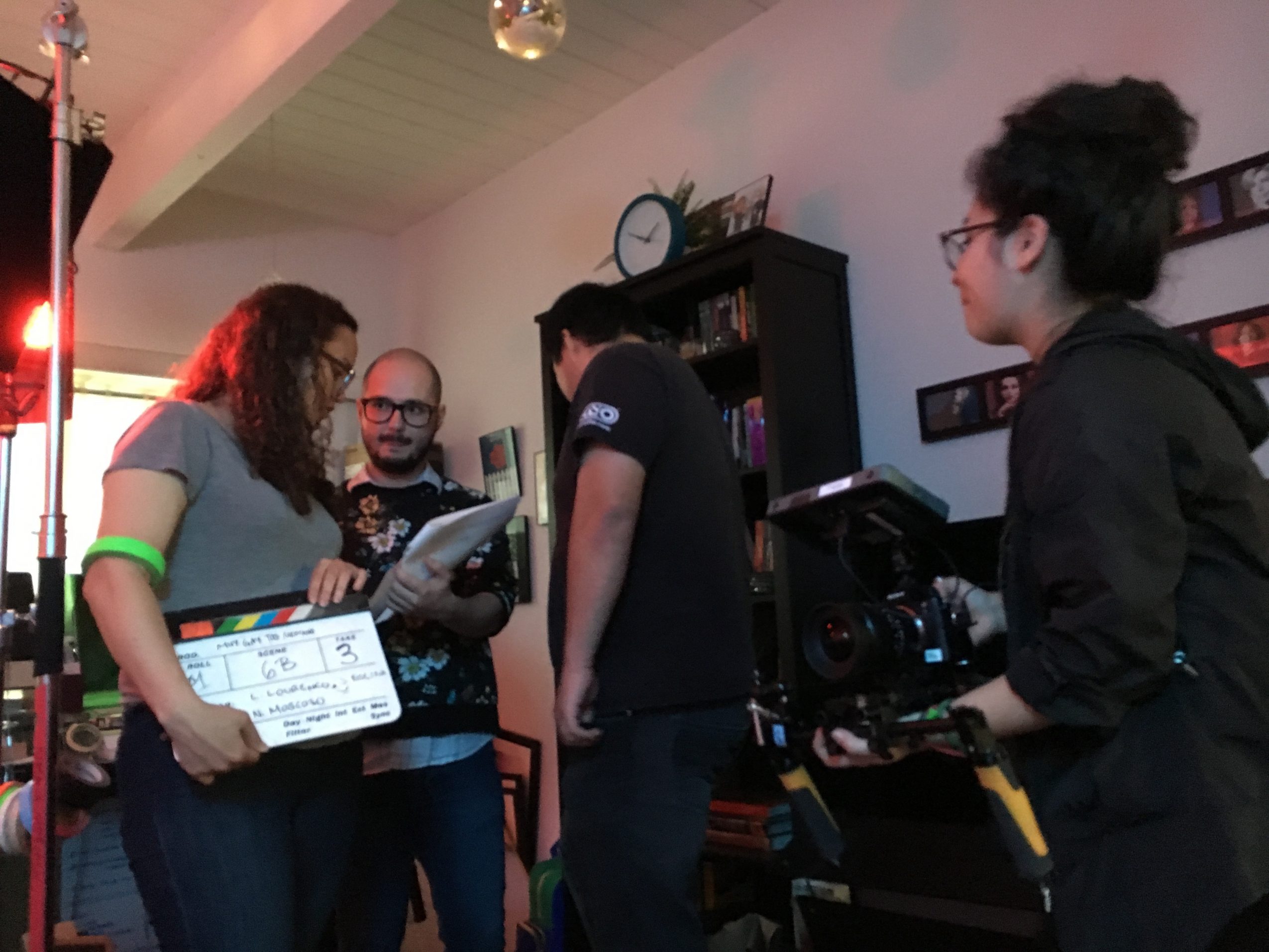 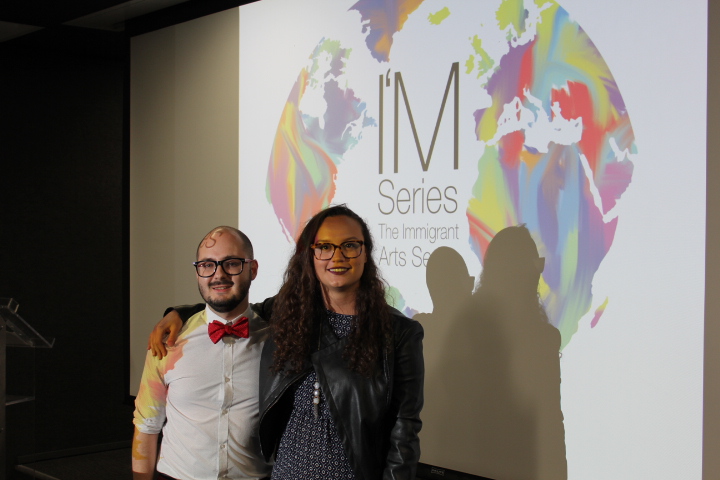 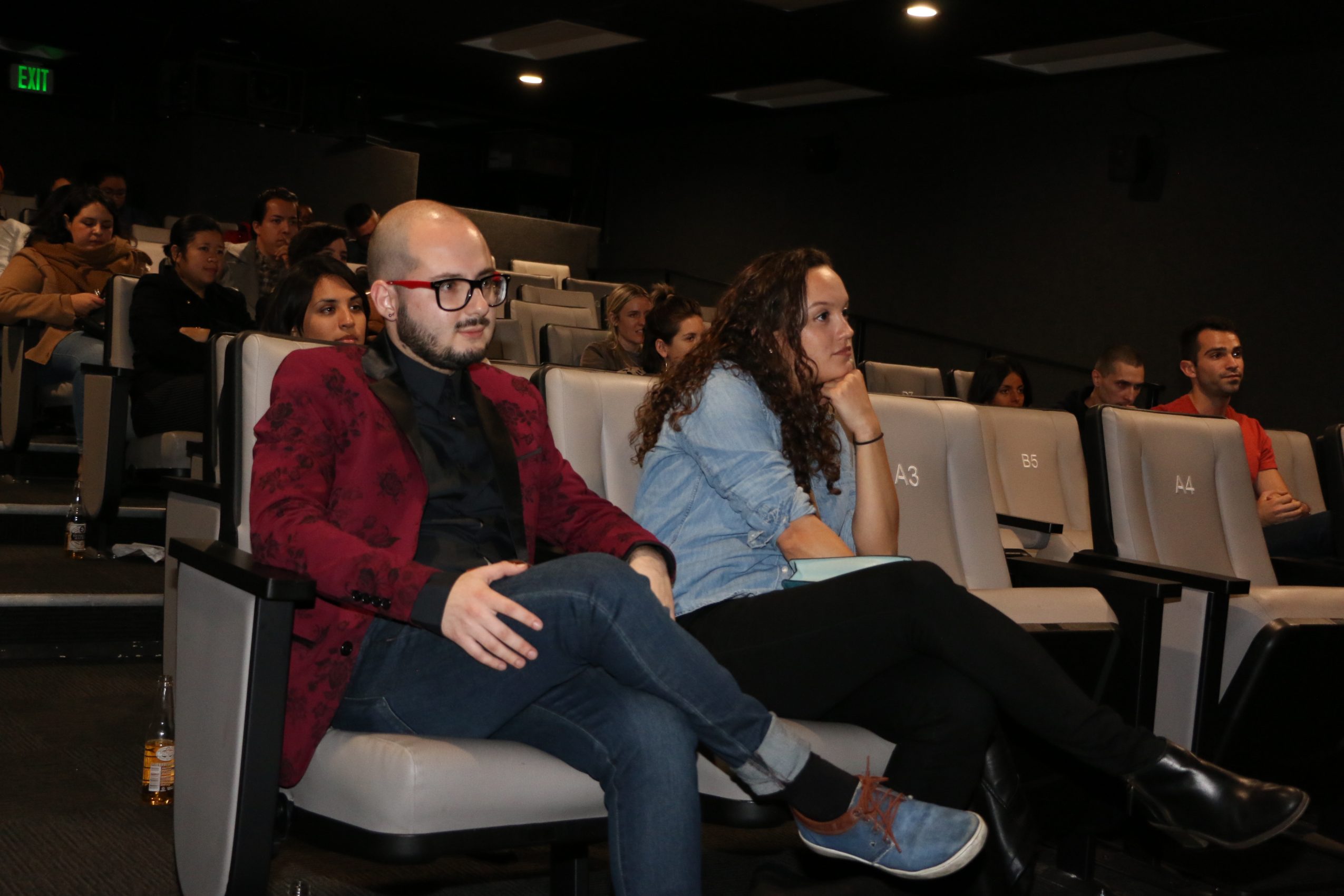 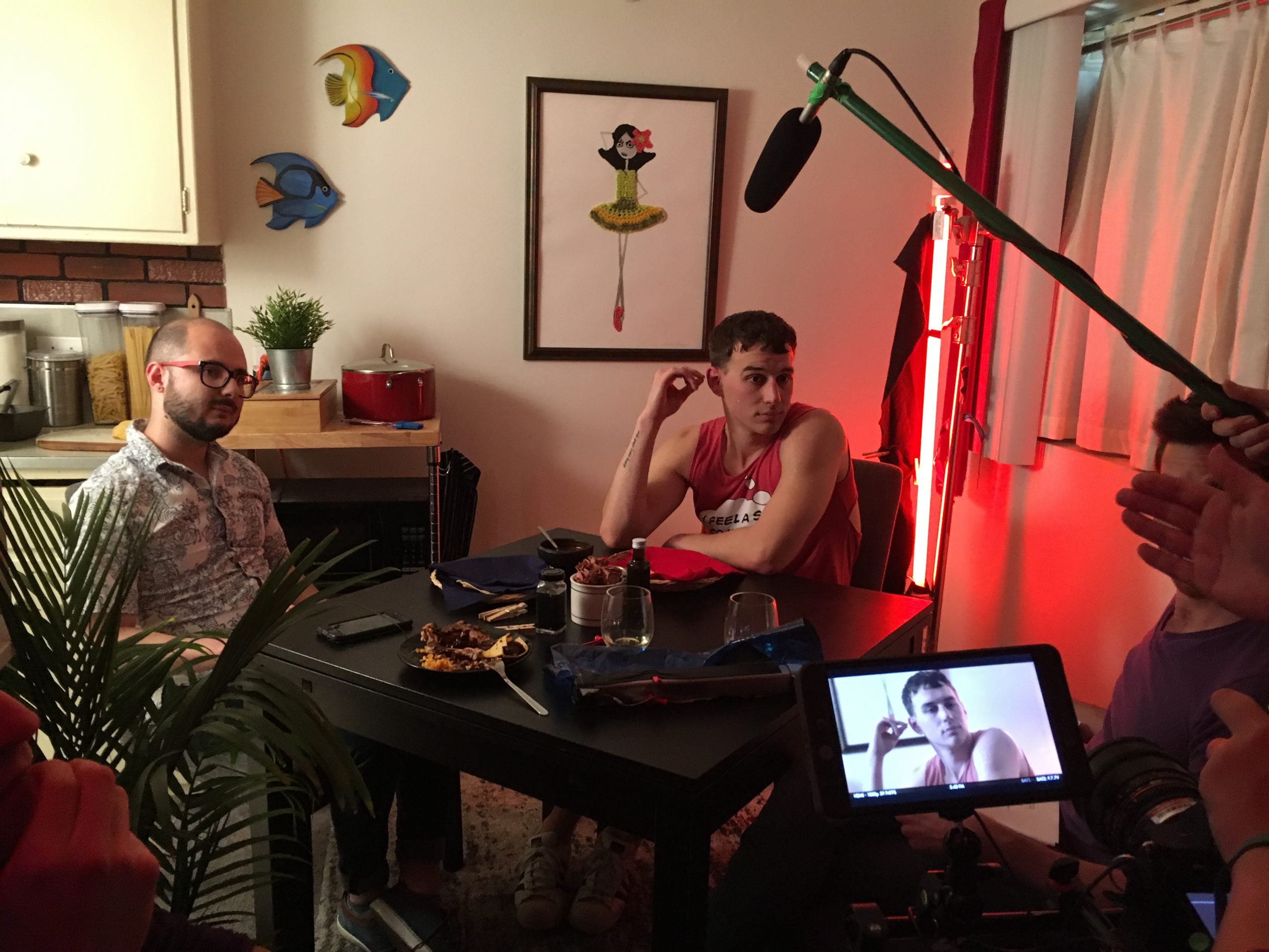 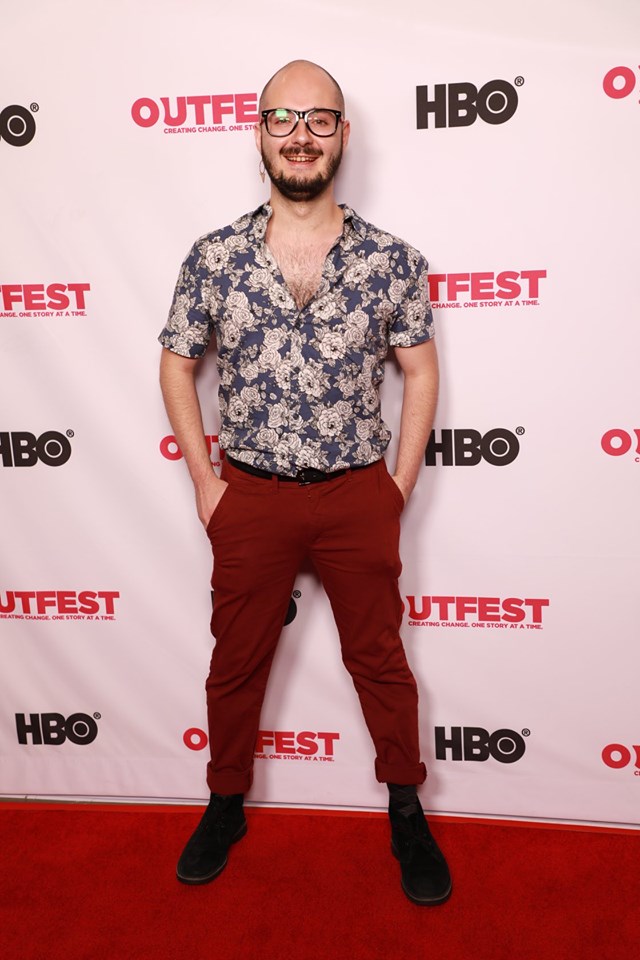