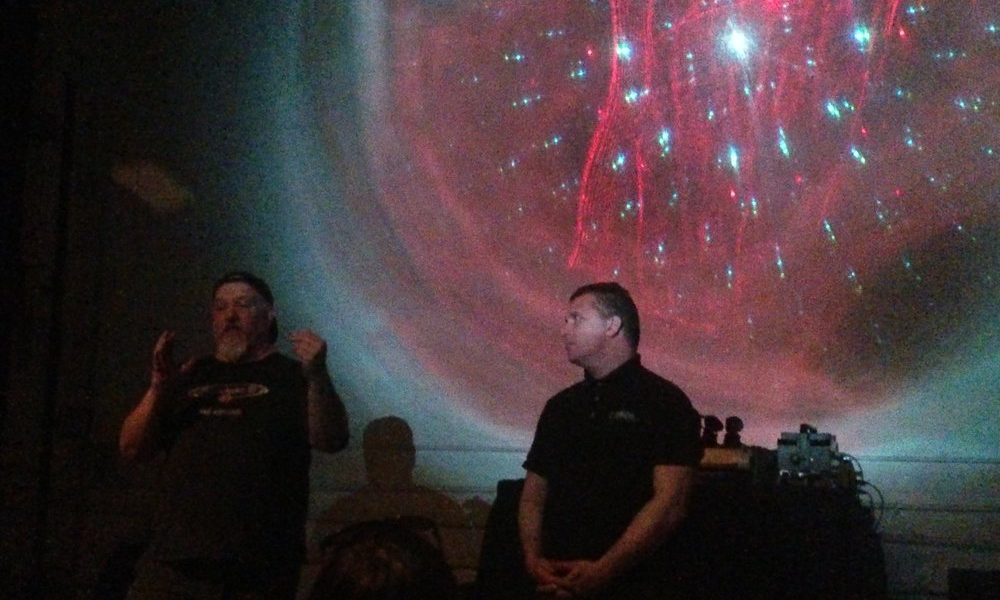 Today we’d like to introduce you to Jon Robertson.

Jon, let’s start with your story. We’d love to hear how you got started and how the journey has been so far.
Like most Angelenos, I, too, was just another ‘pie-eyed Laserium-fan’, back ‘in the day’, when it reigned up at Griffith… But, as my life turned from doing Graphic Design / Art Direction for a “living” (which, after 9/11, seemed to be ever-more elusive.) I began to explore my lifelong fascination with Laser Light as a (maybe??) sort of ‘fantasy football’ option, as-to where to look for gainful work (that paid ‘on-time’…) So, from about 2002, I converted the ‘obsession’ into ‘fishing with Photons’, and after landing a few jobs with my own start-up Laser Show Co. (DayStar Lasers), I sought out my ‘inspirational roots’, by seeking out Ivan and Co. (Laserium) We were ‘officially introduced’ about 2005, and immediately saw the synergy between the companies… We (DayStar Lasers) were, by then, experts at doing all-calibers of ‘remote shows’ (where we bring the show to A-location / city / festival, etc) and Ivan was, of course, the Father of Laser Artistry (but, he, at the time, was lacking in ‘remote-show’ support-staff) so… it seemed like ‘cross-pollination’ was a natural fit. We began to seek-out projects together, and quickly we landed – and performed – very successful shows for thousands, at prominent LA / SoCal-venues such as the Ford Theater, for the LA Film Fest, and even Coachella, later on. In late 2009, as Ivan’s health began to decline, and after an ill-fated run at Hollywood’s famed ‘Vine Theater’ (under different ‘management’, at the time…) Ivan approached me and said ‘Jon, I need to retire, and I cannot think of a better person to carry the ‘torch’ forward’… So, we worked the biz-side out, and my tenure with Laserium began.

Great, so let’s dig a little deeper into the story – has it been an easy path overall and if not, what were the challenges you’ve had to overcome?
About as smooth as the waves at Rincon. Of course, as in all avenues of business, there are those infamous ‘ups and downs’, and Laserium has nary been exempt. But, I have always shared Ivan’s outlook on things, that, ‘if anything worth doing, doesn’t come with a struggle, well – it’s probably not worth doing’, so… We, together, ‘surfed those waves’, and continued to push Laserium forward. Fast forward to 2016, when, after we’d even managed (against many ‘odds’…) to re-open the ‘Van Nuys Studios’ for public shows (which had been on hiatus from 2009 – 2015…) as – an – outlet for the shows in LA, well… We were ‘clothslined’ by a Co. that came along and bought the entire complex, where Laserium had been HQ’d since… 1973 (!) And, they callously cared-less, that they were uprooting the ‘crib’ of one of Los Angeles’ most-beloved – and unique – sources of wholesome entertainment (…and the only-one, for ongoing Live Performance Laser Shows…) So, right smack in the middle of ‘really getting going’ again, at our studios… We had to move. And – time fails us both to recount all the ‘drama’ and struggles of that quest. Nonetheless, not ones to be deterred, we did find a suitable new ‘Home’ for Laserium, late last Fall, just a block North of the original studios.

Please tell us about Laserium®.
Ivan’s concept was, as he called it, the “Cosmic Laser Concert”. ‘Cosmic’, as it was typically (and best, ever…) presented in a Planetarium-style dome, where the ‘vista’ would be one’s entire field of vision, set against a backdrop of stars / the heavens. This majestic setting really and truly ‘transported the audience’ – away from the smog, and the 405, and police helicopters, and the not-paid-near-enough 9-to-5’s everyone suffers, etc, etc, etc – to a place, where, each person was able to ‘see’, and take away something different, in and from the show. Layers upon layers upon layers of Laser FX – like the rich tapestry of a ‘philharmonic orchestra’ – at times, bombastic, and at times, softer and more delicate than the float of a butterfly – that each individual could cherish as their ‘Own Experience’, which could even vary from Laserist to Laserist / night-to-night… And Ivan was the absolute master of conducting this ‘orchestra’ – the show – created by the many, many incredibly talented ‘Laserists’ (Laser Artists), Engineers, and machinists, et al, that made up the Laser Images, Inc. Family of the time – into an experience of pure energy and scintillating visual-joy, via Laser Light. Still, to this media and technologically-oversaturated day, people that experience Laserium often share a common reaction: ‘I’ll BE BACK… and I’m bringing more friends! ‘.. Little in life, these days, is more beautiful than that.

Do you look back particularly fondly on any memories from childhood?
Heh, well… personally – climbing trees and jumping roofs into the backyard, but… I suppose I am a little ‘touched’, in that regard, haha… But, too, the power and humbling Majesty of the Pacific Ocean, and, that very special time, after ‘swimming’ – when your eyelashes are still bristling with water drops, you know the place – and you ‘see’ those little orbs of color-blurring wonder in your vision, as you gaze out over the beach-scenery, at those you love still splashing-about… There’s just something so-magical about light interacting with water, and Ivan somehow managed to recreate those ‘special fx’ – in Laser Light – via the ‘Fiber FX’ in his projectors, and, also in the ‘Lumia’ featured in every Laserium Show Performance.