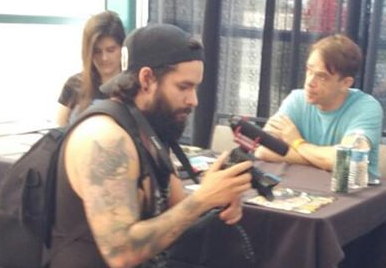 So, before we jump into specific questions, why don’t you give us some details about you and your story.
I have always been a fan of film since I was a child. When I was younger the first film that started my love for cinema was Terminator 2. I saw the film so many times I wore out the VHS. My obsession with film only grew as I got older. I became a huge fan of horror films,scifi,and drama. I would go to my local  video store,and rent films that jumped out at me. That led to great films choices like The Evil Dead. In addition , it led to horrible film choices like House. I never felt a connection to anything more than I have with film. Flash forward years later ,and I started my journey to become a successful Actor. I wanted to be in iconic films. I wanted to be Kyle Reese in Terminator 1. I wanted to create art that would last,and create art that would have a lasting impact. Unfortunately, after countless short films,and nearly infinite extra gigs I decided to stop. I stopped because I couldn’t handle the anxiety of being under pressure to  turn into someone else on the spot. Thankfully this discovery of realizing acting wasn’t for me led to the creation of my YouTube channel years later. My channel has been a blessing. It has allowed me to interview people I admire like Edward Furlong in Terminator 2,and create art that will impact whoever watches it.

Has it been a smooth road?
The road has been ardous to say the least,and still is at times. The hardest thing I’ve dealt with is people wanting to tear me down. When I started my channel I had people telling me I’m too hyper,I’ll never succeed. As my channel has grown people still try to hurt me. It’s a shame people have to be that way. It’s ok to not like me. However ,if you plan to give me criticism make it worth my time to listen.

We’d love to hear more about your work and what you are currently focused on. What else should we know?
As my intro in all my videos go “I’m MRDEATHBREATH! I do spoiler free movie reviews,and sometimes celebrity interviews!” I tell you The Good, and The Bad without spoiling the film. In addition,I interview celebrities when I’m not denied. I’m known for my spoiler free reviews,celebrity interviews,and my energetic personality. What I’m most proud of is the growth I’ve attained. Going back to naysayers. I had countless people tell me my channel would amount to nothing. One family member told me ” your channel will never grow more than it has now”. Those words cut so deep I’ll never have a relationship with that person again. Furthermore , the growth I’ve had has been great. As the adage goes the best revenge is success! What separates me from other channels is my personality,and my concise spoiler free reviews.I’m an uncontrollable ball of energy. It gives me an edge over my peers. However, my energy hasnt always been a benefit. I was made fun of for talking to fast. It was difficult to deal with. I know how silly it sounds,but it negatively affected my self esteem for years. People would call me a freak,or drug user because of how I acted. I can’t tell when I’m talking fast, It all sounds normal to me. Thankfully my channel has given me an outlet where my negative trait is viewed positively. I did a spoiler free IT Chapter 2 review I had six people call me a coke head in the comments. Prior to the creation of my channel I would have been hurt by those comments. Now I just laugh them off. I have developed a fan base that embraces my energy as a postive trait. I’m grateful to my viewers because they allowed me to get past this insecurity.

Is our city a good place to do what you do?
Absolutely! The city of angels is the city of oppertunity. So many events that can turn into a favorable circumstancer.Thanks to the power of social media, the world has information to events happening weekly. If it isn’t a Sugar Mynt gallery event ,it’s Monsterpalooza. Futhermore, we have new conventions poping up monthly,and different conventions returning later this year. Los Angeles is an incredible cityi f your looking for an event to cover. All it takes is courage,a decent camera ,and thick skin.