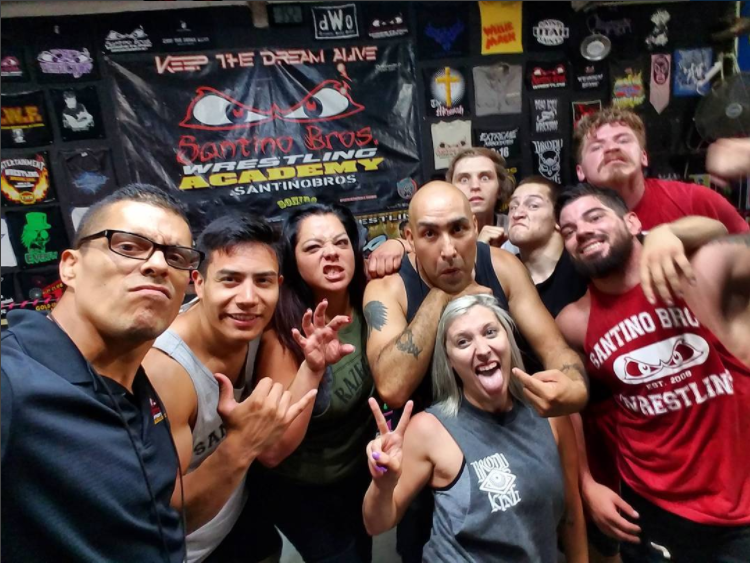 Today we’d like to introduce you to Joey Munoz.

Santino Bros. Wrestling originally started out as a Submission Fighting Tag Team of Kaos and Mongol back in 2004. The duo’s most notable feud was vs La Familia De Tiajuana Damian 666 and Halloween. Fun fact: In 2005, The Young Bucks made their debut vs The Fighting Santino Bros. Kaos and Mongol at the Grand Olympic Auditorium in Los Angeles, CA.

Joey Kaos’ friend and mentor Darren Dynamite D McMillan passed away due to complications of cancer. One of the last things Darren told Joey was “you gotta Keep the Dream Alive”. And that’s just what Kaos and Mongol did. In late 2007 an opportunity arose where they could give back and they ran with it.

Santino Bros. Wrestling Academy started out at Rico Dynamite’s house in Norwalk, CA. Back in 2007 Rico and his roommate Johnny had an unofficial school going with about a dozen students. Feeling they taught their students all they knew but wanted to get them more training, Johnny and Rico approached Joey Kaos asking him to help them out. So in January 2008, Joey Kaos officially opened Santino Bros Wrestling Academy in a backyard in Southern California dedicating the school to long time friend and mentor Dynamite D who passed away the year prior. Pro-Wrestling-School-Traini Kaos brought Mongol, Supreme, Angel, Robby Phoenix and BC Killer to help with the training, but in reality, is was an elimination process. The 6 trainers drilled each student, testing their stamina, heart, passion, will, desires and need to be a Pro Wrestler. To their surprise only a few students dropped off and the majority remained. For the next 2 years, Santino Bros opened its doors to the public, getting a lot of dreamers but only gaining about 4 new students to add to our legacy.

In June 2010 the city of Norwalk, CA. gave Santino Bros Wrestling Academy our walking papers. Two and a half years of hard work came to an end due to a city ordinance. It was a sad day and we thought it was going to end. We had built a comradery, we considered ourselves family and we felt lost at the thought of no more training facility. We could have let go, it may have been easier, but to be honest quitting the school was not an option. Joey Kaos had promised long time friend and mentor Dynamite D that he would “Keep The Dream Alive” and that’s what they did.

Taking a huge risk, in July 2010 just 1 month after getting the boot, kAos rented a small warehouse in Bell Gardens, CA. We began our journey as an official Training school. It hasn’t been easy, we came very close to shutting the doors in 2010 and 2011. Since then we are finding our way and look forward to hitting our stride as THE must go to Pro Wrestling School in the World. We’ve proven we are competition and are here to stay. In September 2014, Santino Bros. Wrestling had its largest enrollment to date with 24 new students, enabling the dojo to open its doors 2 more days per week. Adding to the growing legacy that is Santino Bros. Wrestling Academy.

Santino Bros. Wrestling Academy is the elite Pro Wrestling School in Southern California. We have wide diversity of dedicated trainers who instruct the next generation of Sports Entertainers and athletes. We opened our doors in January 2008 introducing a new type of training center, a place where a student can learn various worldwide styles of Professional Wrestling and Sports Entertainment right here in Los Angeles, CA.

Santino Bros. Wrestling is the leading professional wrestling training company supplying not only talent and knowledge but also equipment and locations rentals and Live Events for several differing productions.

We have a raw passion for the spirit of professional wrestling, it is in our blood, it is in our hearts, it consumes our soul. Pro Wrestling isn’t a “sometimes” thing here for when you are bored with your life or just in between girlfriends/boyfriends. At Santino Bros Wrestling Academy, we’re in it to win it and so should YOU!!

Great, so let’s dig a little deeper into the story – has it been an easy path overall and if not, what were the challenges you’ve had to overcome?
7 years ago on July 1st 2010 we got the keys to a graffiti ridden warehouse in Bell Gardens, CA., we had passed out flyers at the 159 man AWS battle royal giving all wrestlers a free month to train at anytime. Mongol, Sylvia and myself had rushed to get the dojo ready by July 3rd, we did, no one showed up. (not true, we had our core students and maybe 2 or 3 wrestlers show up mid month or so) We ran beginners classes drawing NO students even when we had a good recruitment rate in the backyard, for some reason it did not transfer well to the new location. It was a rough start and by October of 2010 we were ready to close the shop. We ran an emergency last minute showcase on my wife’s birthday which gave us enough money to pay rent for one more month…. It hasn’t been easy but on July 3rd we celebrate our 7th year in Bell Gardens.

Please tell us about Santino Bros. Wrestling.
Santino Bros. Wrestling Academy is a Pro Wrestling school in Los Angeles, CA. that help men and women conquer their dream of becoming a Professional Wrestler. We are proud of the reputable school that has been built throughout the years and the alumni that represent the future of the sport. Our unique and specialized trainer’s and curriculum are what separates us from anyone else.

Do you look back particularly fondly on any memories from childhood?
My favorite childhood memory was going to the local independent pro wrestling shows with my uncle. I never knew of the indie wrestling world and I was fascinated with it. The small venue and up close and personal performances were the best.